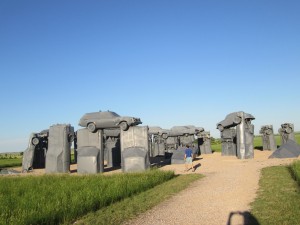 Nebraska, our nation’s cornbread basket, doesn’t invoke a good walk in one’s mind, but I managed to take a good walk in Nebraska’s west. Historically, our pioneers pounded their feet along the Oregon Trail through Nebraska as they headed to better lives. The National Park Service interprets two areas, Scott’s Bluff National Monument and Chimney Rock National Monument. Being the walker that I am, you’d think I’d want to walk some of the Oregon Trail for my One Good Walk series. Rather, I actually want to highlight Carhenge as my one good walk in Nebraska. 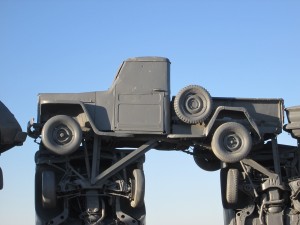 Carhenge captures the kitchy in western Nebraska. We were cruising south on State Road 59 just outside of Alliance, Nebraska. It was late in the day, we were a bit road wary after almost 2000 miles on the road, and the jokes had turned terrible. Within this mood, we zoomed past Carhenge. Slammed on the brakes. And turned the car around to find the most ridiculous and unexpected treat on any road trip, Carhenge. 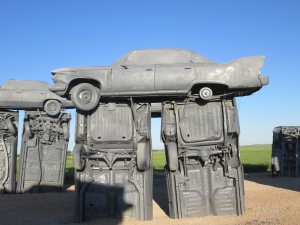 Modeled after the United Kingdom’s Stonehenge, Carhenge piles cars in the historical shapes of Stonehenge. It sits on the side of the road next to a dirt parking lot hosted by a quaint snack bar and visitor’s center. A trail leads you out to this piece of American Art fashioned together by artist, Jim Reinders. 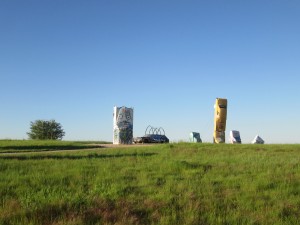 We couldn’t resist getting out of the car and taking the walk through Carhenge. It didn’t take long. First we meandered in and out of Carhenge, finding the tail fins of old Cadillacs and identifying the 1950s era cars situated in Stonehenge shapes. After Carhenge, the trail passes a dinosaur and then other car art along a small ridge to the north of Carhenge. Perhaps a half mile in total, we were also treated to either firework sounds or gunshots–we aren’t sure which ones–but I’m convinced the sounds enhanced our Carhenge experience. 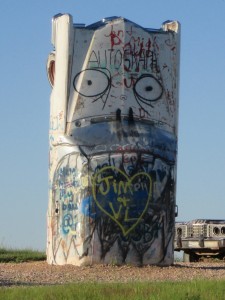 Yes, this walk was short. But considering it entertained us for about a half an hour and got us out of our bad-joke routine, I pick a walk through Carhenge as my one good walk in Nebraska.