My ideas for road trips come out of the most simple conversations. Since my daughter would be going to overnight camp in Arizona, why not make a giant road trip out of it and hit my favorite places in the US? The added bonus would be my hubs hadn’t been to most of the western National Parks, and I’d get the chance to share them with him.

So based on the location of camp (The Orme School and Camp in Mayer, AZ), we mapped out a giant circle (see the bottom of this post). Our first glitch: hubs wouldn’t be able to leave from Denver with us. My daughter and I would have to do the first leg together. The hubs would fly to Phoenix and then meet us at camp. The kid and I headed out, first stop, Salida, Colorado.

South to Salida and Pagosa Springs 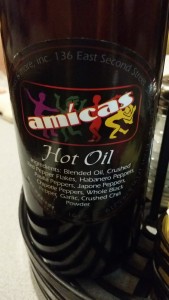 My daughter, Kelly, and I began our trip. Our first stop going south was a place my acupuncturist raves about, Salida, Colorado. We happened to arrive in Salida during Riverfest. Vendors decorated the street, the river ran high, and we enjoyed some of the best gluten-free pizza I’ve ever eaten at Amicas.  I dripped their special hot oil on top of my pizza, making it the tastiest treat south of Denver!

With full bellies, we continued southwesterly, with a goal to stop in Pagosa Springs and take a soak in one of the hot springs. Don’t waste your time and keep driving! What a rip off! Although there was a tiny public access point that only the drunk or stoned would attempt, the resorts wanted at least $25 for us to soak in the springs. No thanks. We loaded back up, grabbed a quick bite in Durango, and headed to our first night’s stay, a yurt near Mancos. Read about going off the grid and staying in a yurt, here. 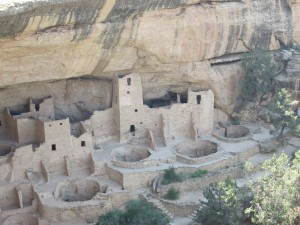 After a great night’s sleep, we headed west to Mesa Verde National Park. One of my longtime favorites, I took a different tack at this park and paid for a ranger-led tour. Kelly whined and complained until we actually got to the hike. Then she was the first one up the dangerous parts. Read about our day hike in Mesa Verde National Park, here. 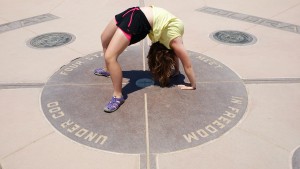 After such a rich stop, we packed up again to head to Four Corners. Another rip off, the Four Corners monument squeals tacky. But the Navajos have found a great way to make money, and they unabashedly charge $5 per person to enter their overbuilt landmark. I have super fond memories of this area from when my family visited in the 70s, and I couldn’t resist repeating the trip. Kelly wanted to touch all four states at once, choosing to do a backbend to the applause of those standing in the 45-minute line. Finally, with our bellies full of Navajo tacos, we pointed the car to Monument Valley. 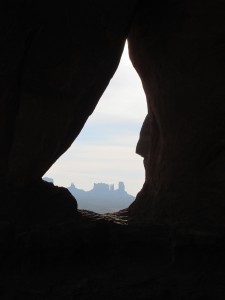 Monument Valley remains in my heart as my favorite place in the southwest. It still does. I’ve been many times, and I never tire of the mind-bending shapes and long-distance views. Kelly, in her best tween twang, couldn’t have cared less. Not deterred, I still marveled at sites I’ve seen many times. During our stay, we slept in a tipi, pow-wowed, and visited Anasazi ruins. Read about our stay, here. I even put a picture of Monument Valley on the cover of my book, Travel Magic Postcards. 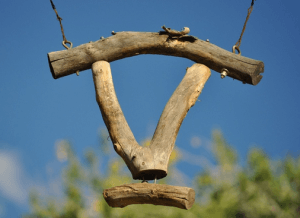 Our last day together, I drove Kelly to camp. Her camp is where I attended boarding school in high school. They turn the school into camp for the summer. Trying my hardest to not over express my zeal and wishes that she enjoy this place of warm memories, we arrived at camp right at the same time that the hubs, Steve, arrived too. We checked her in, barely got a kiss good bye, and then headed back north. Thus, Steve and I started our vacation together. 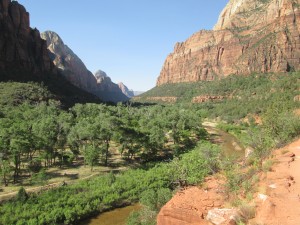 We drove north, bypassing the Grand Canyon National Park. Steve and I hiked the Grand Canyon as a fundraiser for the Leukemia Society a few years ago. We felt no need to fight the summer crowds of the south rim and thus went directly to Zion National Park. After a cheap hotel stay in Kanab and a bad Mexican meal, we woke up early to enter the park. I had a foot injury, and Steve’s sights were set on an extreme hike. Thus, we separated and he hiked Angel’s Landing while I took my time going up Emerald Pools. Read about it here.

Beginning near Zion, we began to lose good internet and cell phone reception. We had also both exhausted our roaming plans as well (damn it T-mobile!). For the rest of the trip, we went old school, relying on good AAA maps and intuition. While looking for hotels, we actually resorted to walking up to lobbies, asking for rates, and negotiating. I have to say, it was a nice change of pace to interact with people and not with phones. Our night outside of Tropic, UT resulted in a room with a jacuzzi and some fabulous bar-b-que out the back of the hotel. 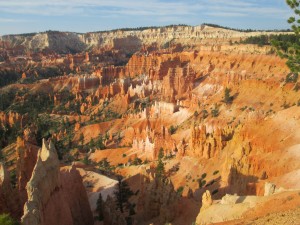 The next morning, we started early in Bryce Canyon National Park. I had never been to Bryce, and I couldn’t wait to get there. A friend of Steve’s recommended the Queen’s Garden trail. Since we had arrived at the park before the visitor’s center opened, we took the advice. Holy guacamole! What a trail! Off the Navajo Trail, we stepped gingerly down the side of the canyon, through the hoodoos and forest. At the end of the trail, we came across Wall Street, a slot canyon. Finally, I got the chance to hike a slot canyon and share it with my hubs. Now ranked as my favorite hike of all time, read about it here.

Refreshed from such natural stimuli, off we journeyed through Escalante-Staircase National Monument, a stop at an artist’s studio, and the best piece of cherry pie I’ve ever eaten at Burr Trail Grill in Boulder, UT. Stop, breath, relax, and eat here. After another two or three hours of driving, we hit our goal for the day of getting north of Salt Lake, UT so we could make our way to Yellowstone National Park the next day.

Quickly through the Grand Tetons 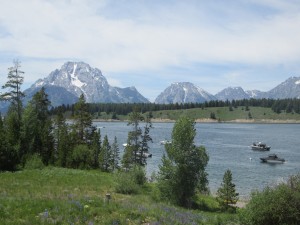 Avoiding the Crowds at Yellowstone 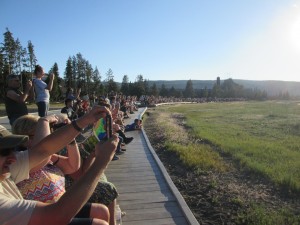 We had smartly made a reservation at the Grant Village dining room for our first night in Yellowstone National Park, and although a bit expensive, was well worth the planning it took. We both enjoyed a delicious meal overlooking Yellowstone while sipping a not-so-great drink, Citrus Mist. Made of tequila, grapefruit juice and Midori, we didn’t embide in another. The Grant Village rooms are simple–no TV, no internet, no entertainment. Thus, with an hour or two left of daylight, we scooted over to Old Faithful.

Steve had never seen Old Faithful, and I’m glad to say, it was thrilling for both of us. We beat the system though–the National Park Service has built stadium seating around the geyser. Rather than sitting with the hordes of people, which at 8 pm were smaller than normal, we walked around to the back of Old Faithful. A boardwalk skirts its boundary and provides a nice ledge to sit, wait and watch. After a reliable and timely spout, we viewed a few of the mud pots up the road and then crashed in our entertainment-less room. 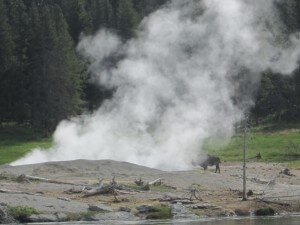 Bison getting warm at Yellowstone.

The following morning we got up early to see wildlife in Lamar Valley, hike the Grand Canyon of Yellowstone, and continue the figure 8 around Yellowstone National Park. On our journey, we discovered that a redwood forest covered Yellowstone at one time. We also found a secret spot to immerse into the hot springs. Read about our discoveries, here. We closed the day by attending a ranger-led talk, fireside, about the fall and slow rise of the bison. Sadly, we learned about some of Americans’ first warfare on the Native Americans–kill their food source and they’ll stay where you want them. On reservations.

The next day we left Yellowstone, having seen and hiked all the areas we felt were necessary for Steve’s first trip. We headed out the east entrance, and we found the views through Wyoming quite stunning. We bypassed the Buffalo Bill fiasco in Cody, as by this time, we felt a little intrusive on the history of bison, white men, and Native Americans. It didn’t feel right to pay tribute to a culture of destruction and abuse. 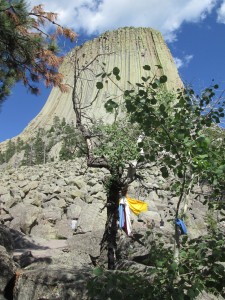 As children who grew up with the influence of Richard Dreyfus on our psyche via the movies Jaws and Close Encounters of the Third Kind, we had to stop at Devil’s Tower Monument. A quick hour out of the way treated us to a great experience of geology and culture.

For dinner, we stopped in Sturgis, South Dakota, home of the famous motorcycle rally. My sister and brother-in-law, huge Harley fans, would have killed us if we hadn’t stopped. After another delicious pizza, a Knucklehead stout, and a walk through town, we settled into our hotel room just outside of Rapid City. 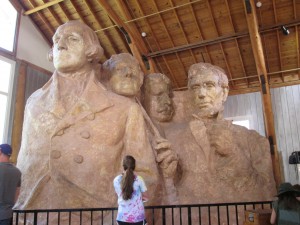 If you’ve been to Gatlinburg, TN, you’ll find the area around Mount Rushmore National Monument almost as tacky and touristy. To beat the crowds, we got up early and arrived at the park around 8:30. After paying $11 to park, a legislative maneuver to raise funds without charging a use fee, we spent an unexpected and enjoyable two hours at Mount Rushmore National Monument. Read about our walk, here. 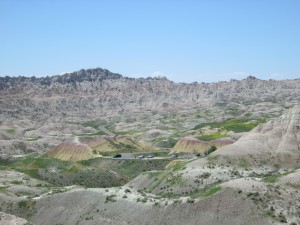 From viewing the dead Presidents, we drove toward Badlands National Park. Wall Drug grabbed us off the interstate for a quick bite and an internet fix. Then, we journeyed off to find where the Bachelor had filmed an episode. Alas, it wasn’t in the park. But we did find my second favorite hike of all time up the Notch Trail. You can read about it here. 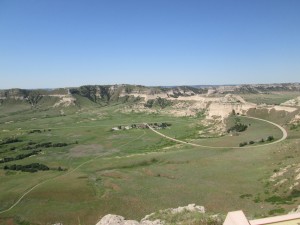 After the Badlands, we began our trek southwesterly. Our trip home through southern South Dakota and Nebraska included a pensive stop at Wounded Knee, an unexpected joy at Carhenge–read about it here–and a stop at Scott’s Bluff National Monument and Chimney Rock National Monument. The two monuments chronicle the western expansion and the walk of the pioneers along the Oregon Trail. Surprisingly, I learned that the pioneers did in fact walk, not ride, most of the way. With 30-60 million bison everywhere at the time, there had to be some excitement along the way.

Shortly after our stop at the Oregon Trail monuments, we arrived back in Denver. Nine states and 2900 miles can satisfy most wanderlusting urges, especially because it included so many of the western National Parks. Not me. Next month, I’ve got a weekend in Boston followed by a train ride across the US. Watch for my posts! 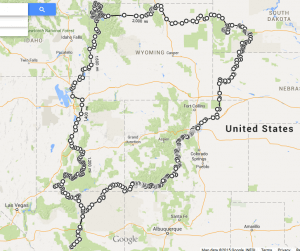 Map of our route