Whether true or not, the information out there about aluminum-based deodorant’s affect on brains and memory is scary. Then, when stopping and thinking about putting a layer of aluminum-based chemicals and fragrances in our armpits, which are next to our lymph nodes and breasts, via a daily dosage of antiperspirant or deodorant, just seems a little bit crazy. Truly though, no one wants to stink.

It’s a fate worse than spinach stuck in your teeth. 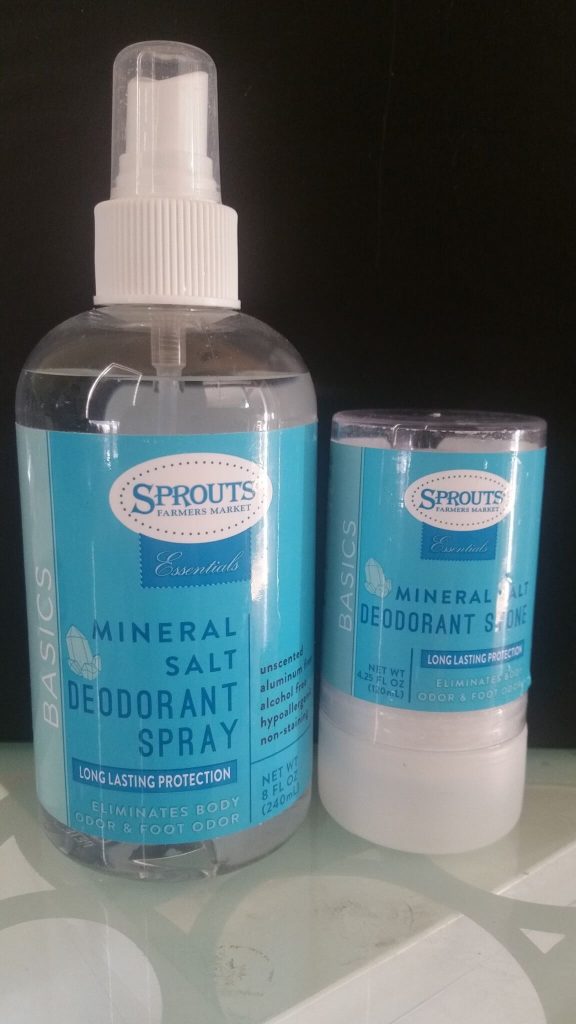 Sprouts gave me a complimentary set of both the Mineral Salts Deodorant spray and the stone. When I first looked at them and read the label that they “eliminate body odor and foot odor,” I really doubted it. You see, I sweat. A lot. I walk everywhere, and I work up quite a wet armpit which even on its rosiest day, smells. Like most folks out there, I am not willing to let even the possibility of the slightest whiff of unpleasantness settle in.

A Spray and a Stone

I set both products on the bathroom vanity, and to my surprise, my husband snatched the stone. He has done research on aluminum’s affect on Alzheimer’s, and unbeknownst to me, he’d been looking for an alternative solution to his Right Guard. He tried the stone first, and I followed his lead with the spray.

After our first day, we did sniff tests on each other. Nothing. Nada. Not a stench to be had. I couldn’t believe it, nor could he. Granted the day had been cool, so not much sweating had occurred. The next day in blazing Denver heat, we gave the Mineral Salts Deodorant another try. Granted, this product is a deodorant (built to manage smell), not an antiperspirant (built to manage sweat). Even though our pits were wet from the heat, we didn’t stink. Nor did we stink after the sweat had dried into our t-shirts. Not even a glimmer of ill-smelling funk.

Buy Yourself Some Natural Deodorant

Thus, I’m sold. You’ll find me spritzing two sprays in the winter and cooler days the rest of the year. I’m thrilled that I no longer throw an aluminum-based stench killer into my armpits. Whether or not my new habits will prevent me from getting Alzheimer’s, I have no idea. But I do have to say that it just seems to make a lot of sense to use a natural product when available. Thus, I give Sprouts Mineral Salts Deodorant an A-. It’d get an A if it would also manage the wetness. Thank you Sprouts.