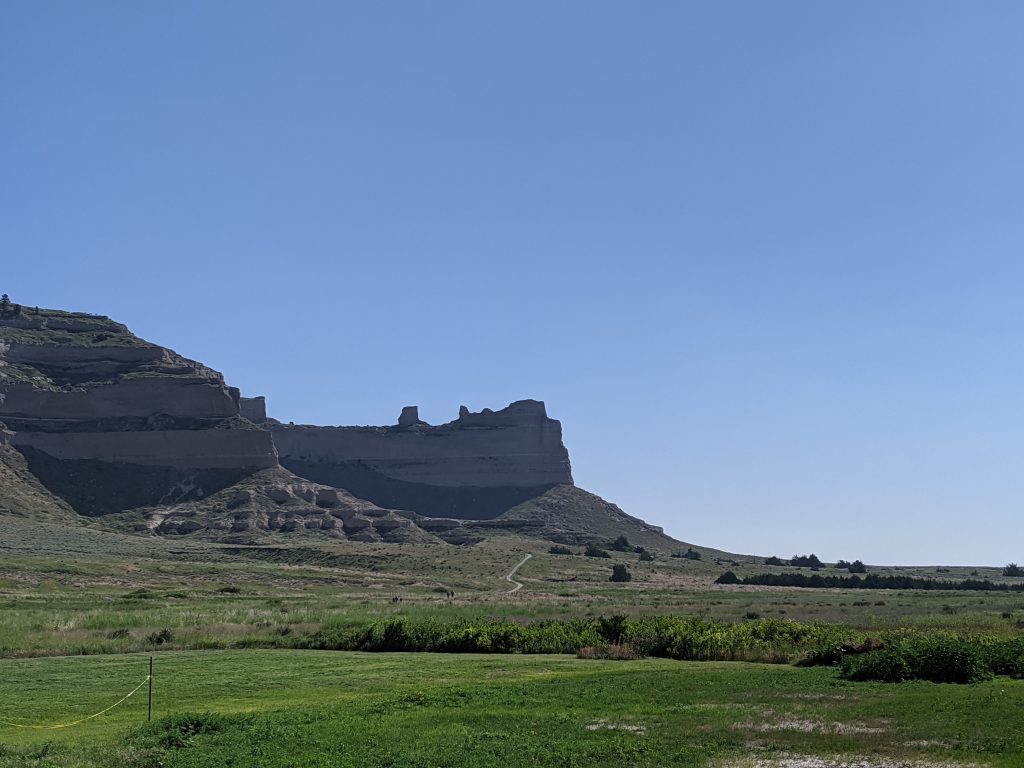 I think of all the states that we think about hiking in, no one ever thinks about Nebraska. But why not? Considering that thousands of migrants moved from St Louis to Utah via the Oregon Trail, millions of hiking footprints have been stamped across Nebraska as folks looked for the promised land.

And I couldn’t wait to hike a portion of the Oregon Trail in Nebraska on our 50 Hikes 50 States Project.

Charging a Tesla in Nebraska, Gulp 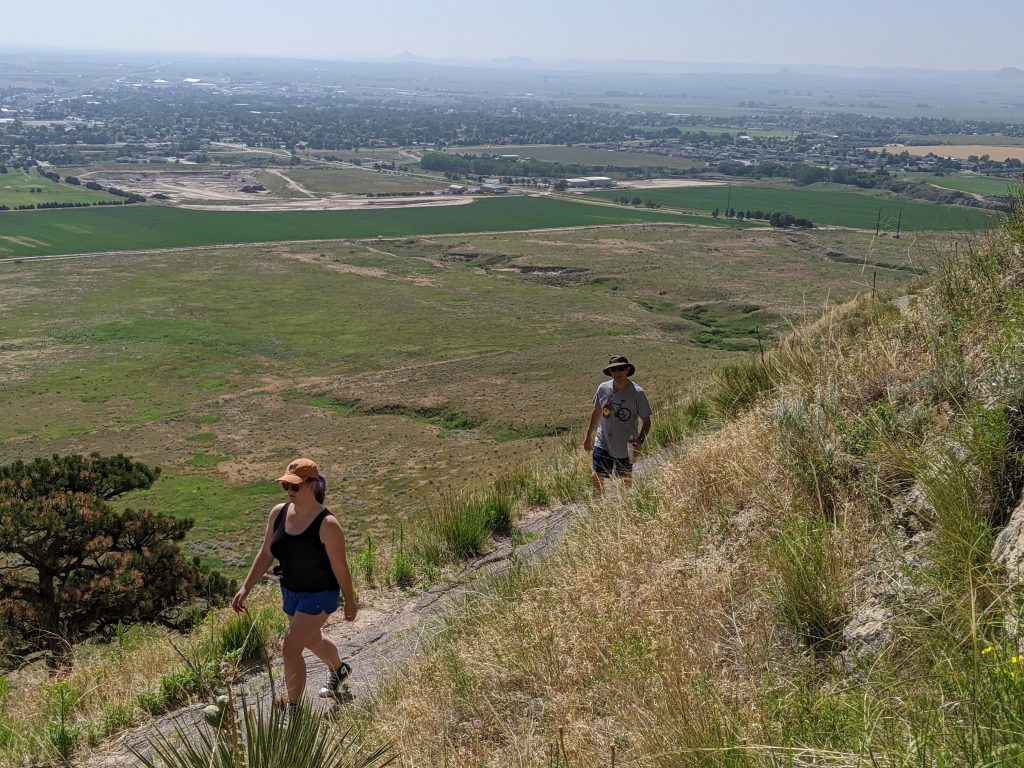 For this trip, we decided to drive from Denver through Nebraska to South Dakota and then on to North Dakota. A quick 3-hour ride brought us to the town of Scottsbluff for a night’s rest before heading out the next morning to Scott’s Bluff National Monument.

But first we had to charge. Our Tesla gets about 300 miles to a charge, and we knew the drive to South Dakota would be a bit rough. We found a slow charger at our hotel, and pumped up our mileage to 275. This would be barely enough to get us to South Dakota after our hike at Scotts Bluff.

We Have to Walk? 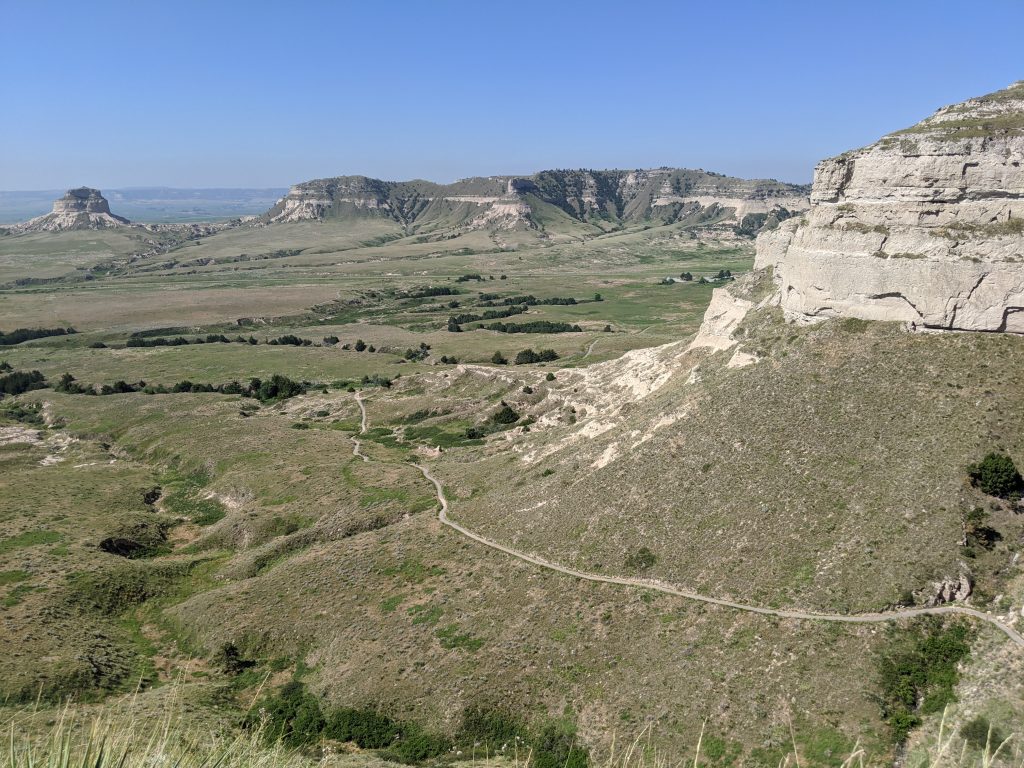 The sun woke us up and started its fast beat to 92 degrees. Luckily, we arrived at Scotts Bluff National Monument before the ridiculous heat would keep us from wanting to hike. Sadly, though the Visitors Center was closed. Luckily, though, we had been here before but hadn’t hiked.

So, we combined the best of both visits. Recalling what I had learned from the previous visit, one of the fallacies of western expansion history that I held had gotten corrected. Perhaps Little House on the Prairie had influenced me too much, I had assumed that all of the Mormons heading to Salt Lake had ridden in the back of their wagons. Not so.

The backs of the wagons held food stores, animal feed, the infirmed and the young. Otherwise, you walked. Scotts Bluff, a geologic monolith that shoots up 500 feet from the plains, alerted these pioneer hikers that they were a third of the way to their destination. Hiram Scott, a fur trader, had died here, but his namesake called out to the voyagers. 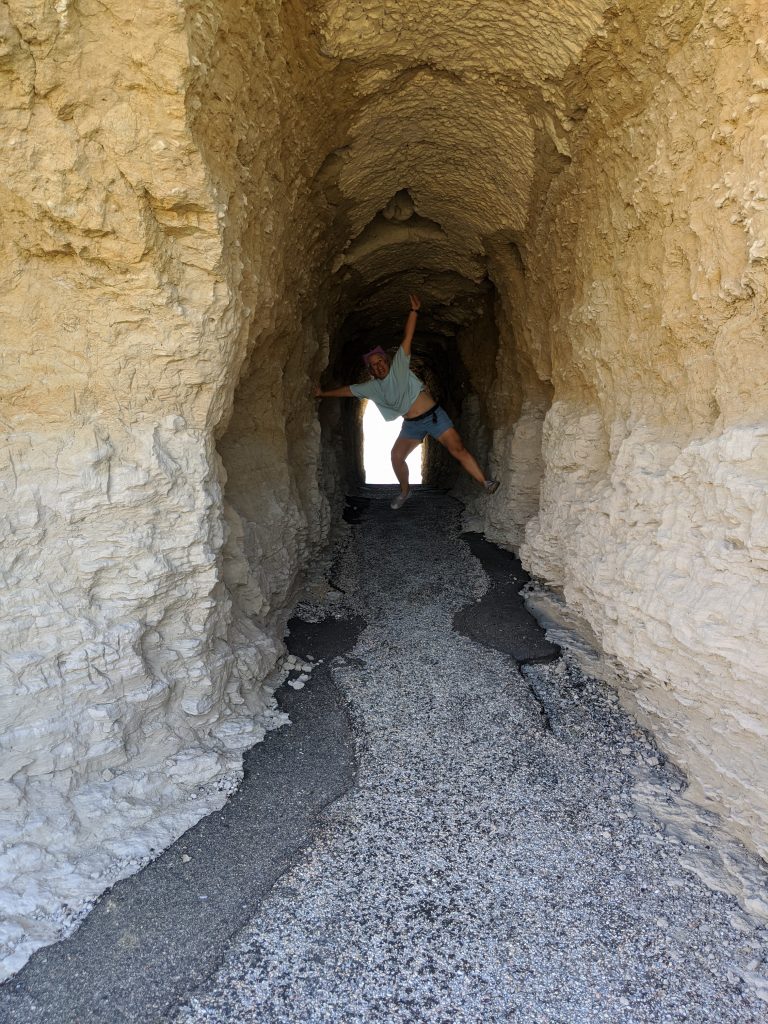 While the pioneers looked for a safe pass through the bluffs, we looked for the trail that would take us to the top. Behind the Visitors Center we found the Saddle Rock Trail, a paved, curving path that switchbacked up the bluff, through a tunnel, and to the top of the bluff. 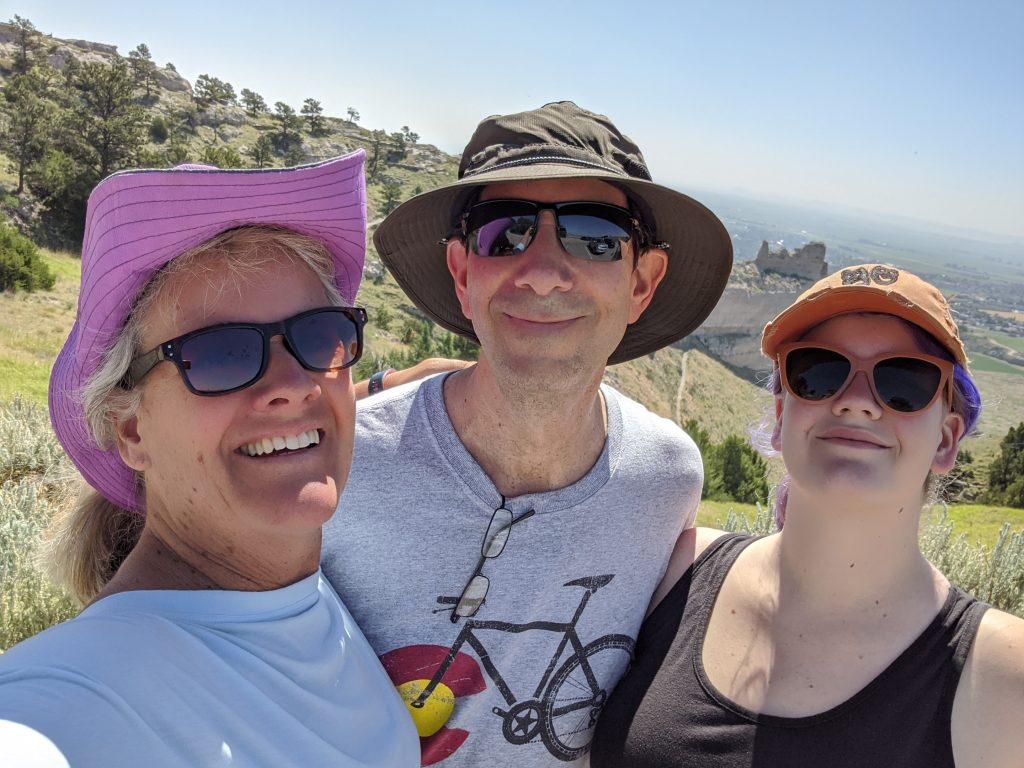 All I could think of was how happy I was that I had on good walking shoes (read my Chacos review) and not some old, cobbled, leather-and-heel contraption from the 1800s. I also blessed the bottle of water easily filled from the hotel’s sink.

1.6 miles up the bluff we climbed, arriving at a healthy 4249 feet in elevation. The views stretched practically to Missouri. Overlooking the North Platte River and the old Fort Laramie Site, I wondered what the pioneers felt when their views changed from endless plains to white bluffs that seemingly towered over their previous days’ views. What would they think when they saw the Rockies? 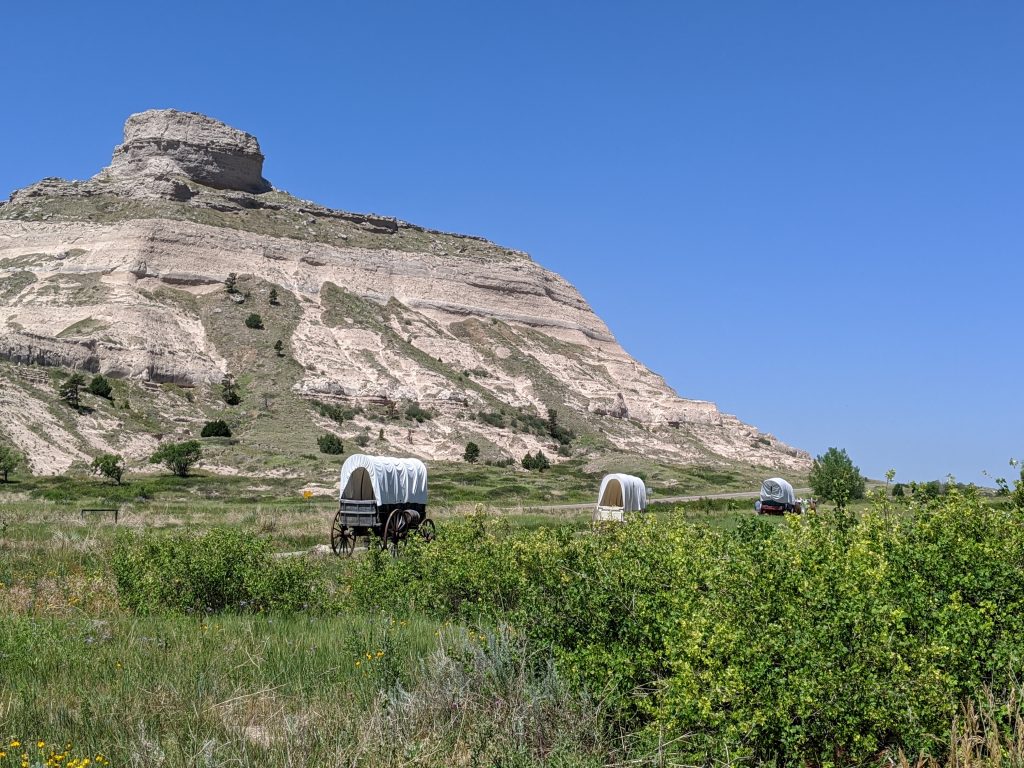 We explored the bluff and its views, then trotted down the trail back to the car. After a quick stop in the portapotty and a view of the covered wagons on display, we scooted out of town on our way to Carhenge. 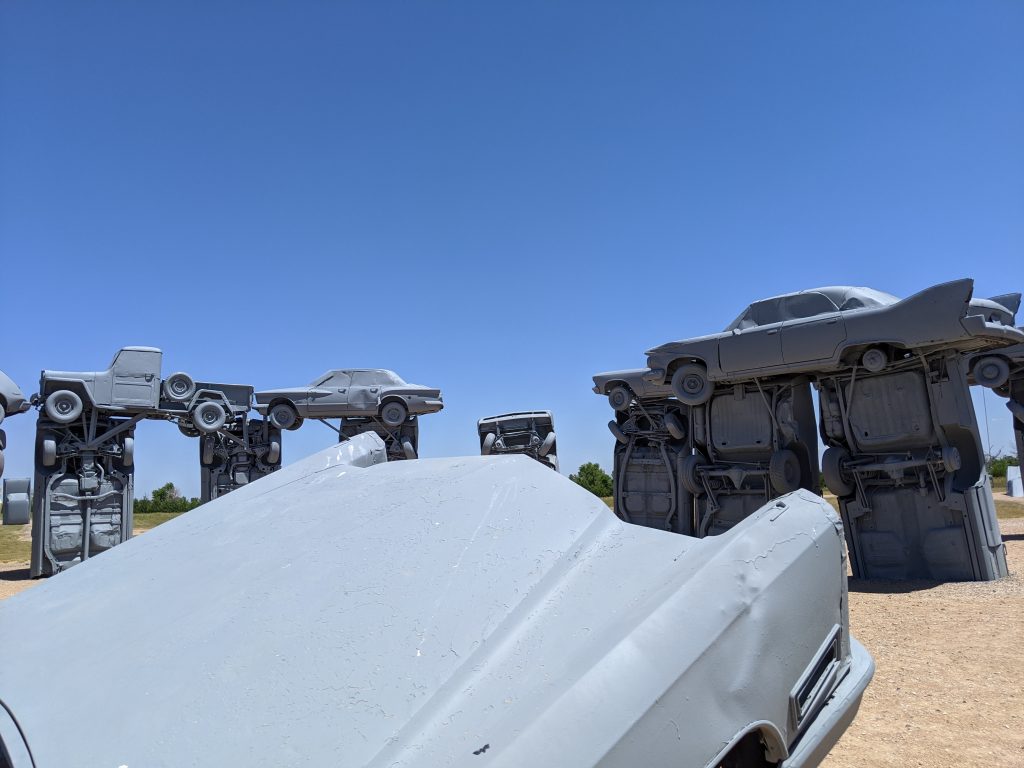 I’d been to Carhenge before, as well, but our daughter, who was along with us on this ride, had not. Whereas I find Carhenge quaintly quirky and enjoy every bit of it, the best we could get out of the teenager was an eye roll and a, “Really?” But she did get a kick out of rolling the wheels on an old Chevy. Or was it a Cadillac?

Due to COVID, we were a bit leery of eating in restaurants and visiting groceries. Thus, we had packed a cooler of Trader Joes, fresh produce, and gobs of peanut butter. I had made a tofu egg salad, which we enjoyed on rice cakes with sun dried tomato. We dug into lunch at the picnic tables at Carhenge; the gusty wind made us eat quickly.

Soon, we were back on the road to South Dakota. We watched the battery on the Tesla start dropping quicker than we had anticipated, and started to get a bit nervous. Would we make it all the way to Hot Springs, SD? If we didn’t, what would be our choices? Who could rescue us in the middle of nowhere? Read about it here on our South Dakota adventure. 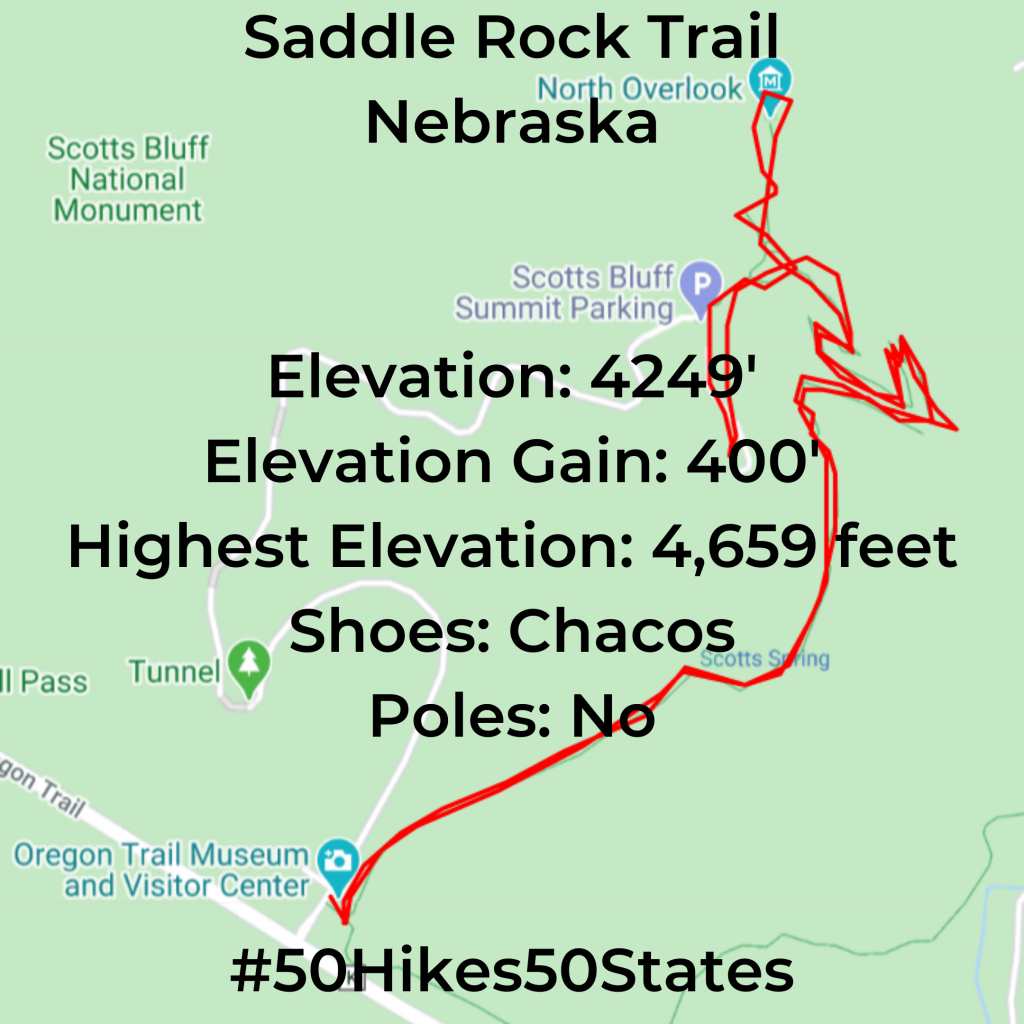