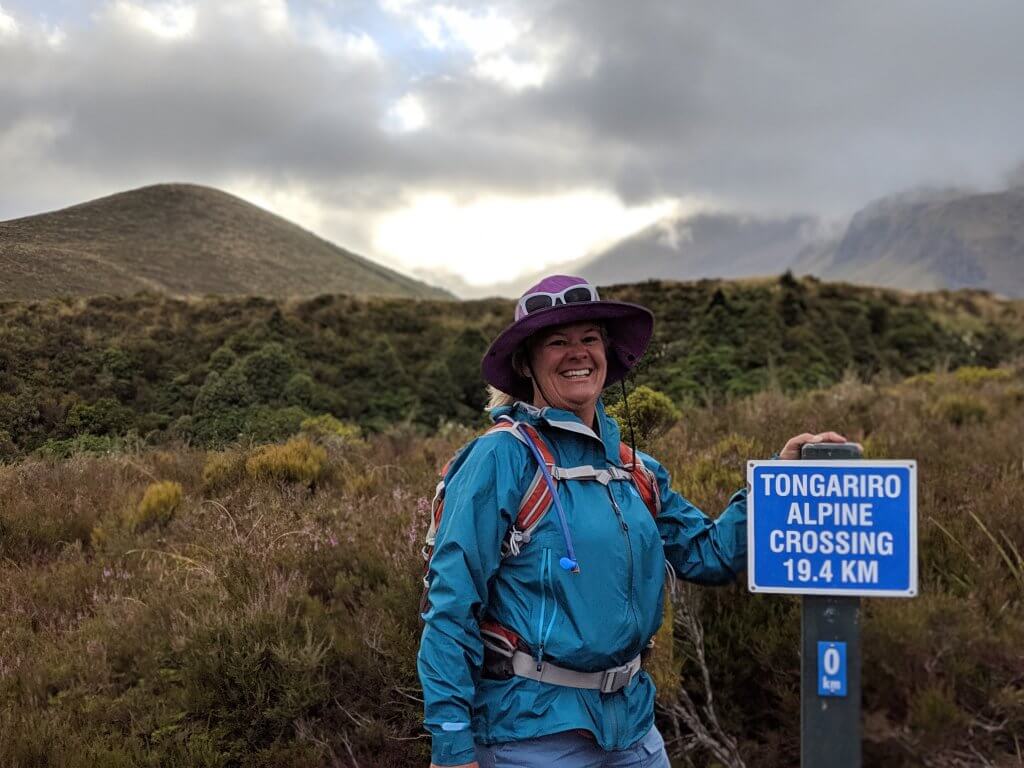 I had no idea I was in Middle Earth. Google Maps sent me south from Auckland through Hamilton to a tiny dirt road that went over a set of mountains, past fields of sheep where I barely missed hitting the wild black baby goats jumping across the path as Jurassic ferns scratched the sides of my rental car. I was dead lost.

A three-point turn on the edge of the earth turned me back to the tarmac road, where I eventually found my way to the tiny ‘burg of Matierie for a two-night stay in a restored church-turned-home with a delightful family of New Zealanders who fed me fresh-from-the-farm vegetarian fare for two days. Little did I know that Mount Doom loomed at me during that evening’s sunset until the family asked my plans for the next day.

The locals don’t call it Mount Doom. What they told me was that New Zealand’s best day hike was right around the corner and I had to do it.

Thus, I signed up to trek the Tongariro Alpine Crossing, a 19.4 km tromp through the New Zealand mountains that would take me across moonscapes, down volcanic scree, and edging by alpine lakes that gleaned turquoise blue. The hike starts in one place and ends in another. Unless I wanted to add another 10k to complete the walk, I’d want to buy a ticket on a bus service. Little did I know that $40ZD would be the best investment for the day.

The next morning I woke early, allowing myself an hour of travel time to get to the shuttle. I stopped by the 24-hour gas station and purchased a veggie pie for lunch, a tangerine, and some walnuts. In my pack, I stuffed a pair of Columbia hiking pants, my REI wind/rain jacket, gloves and ski hat. Although the weather wasn’t scheduled to dip below 18 C for the day, I knew mountain hiking could bring any conditions.

My first clue that I was about to journey to middle earth was all the folks wearing Hobbit and Lord of the Rings gear on the bus. Whispering through the muddled voices of the early morning travelers, I kept hearing “Mount Doom” in the dialogue. But glancing at my trail map, the only mountains that appeared on it were Mounts Ngauruhoe and Tongariro, two sacred mountains in the Central Plateau of New Zealand’s North Island.

The trail started easy. A fluffy tundra of heather laid out in front of me as people settled into their paces. Being a solo hiker, I made sure to connect with a few folks in a few groups who would watch out for me during the day. With a steady stream of hiking enthusiasts, the trail filled with international trekkers looking for a challenging hike. I was never alone on the trail.

Are You Sure You Want to Climb to Mount Doom? 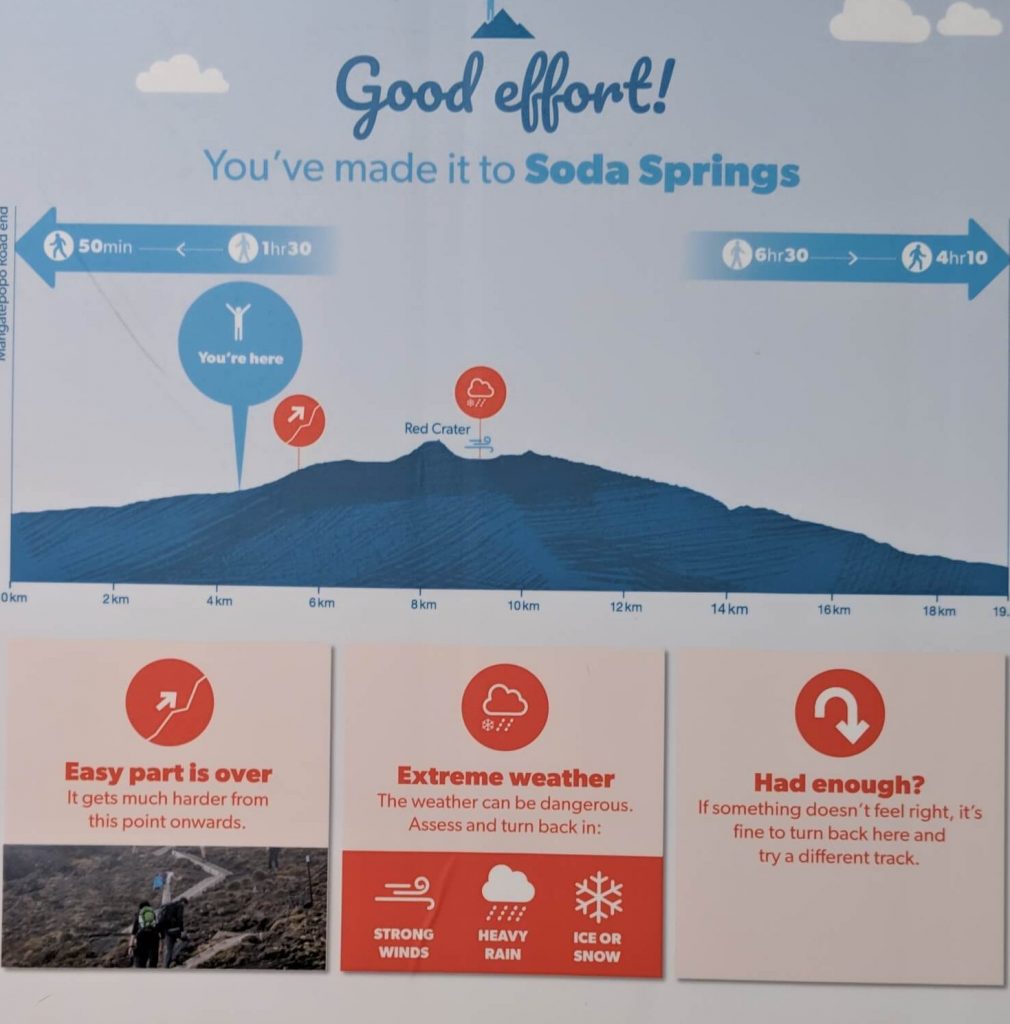 Together, we found that trekking challenge. A gradual climb awakened our legs. Well-placed compost toilets offered the perfect breaks. At the toilets were ominous signs; they stated the percentage you’d fail in the hike, how often rescues occurred daily, and how dangerous the current portion of the hike was to hikers. The signs were dead serious on making sure you knew your hiking condition and you had a get-out plan.

Then the stairs began. These were no stairways to heaven. Relentless ladders climbed steep banks to get to the South Crater. And that’s when I found out I was in Middle Earth in the shadow of Mount Doom. Two men schooled me when they appeared in their brown hooded robes and recreated a scene from the famous movie series. I quickly learned that Mount Ngauruhoe had a Hollywood appearance, and I was on her set. 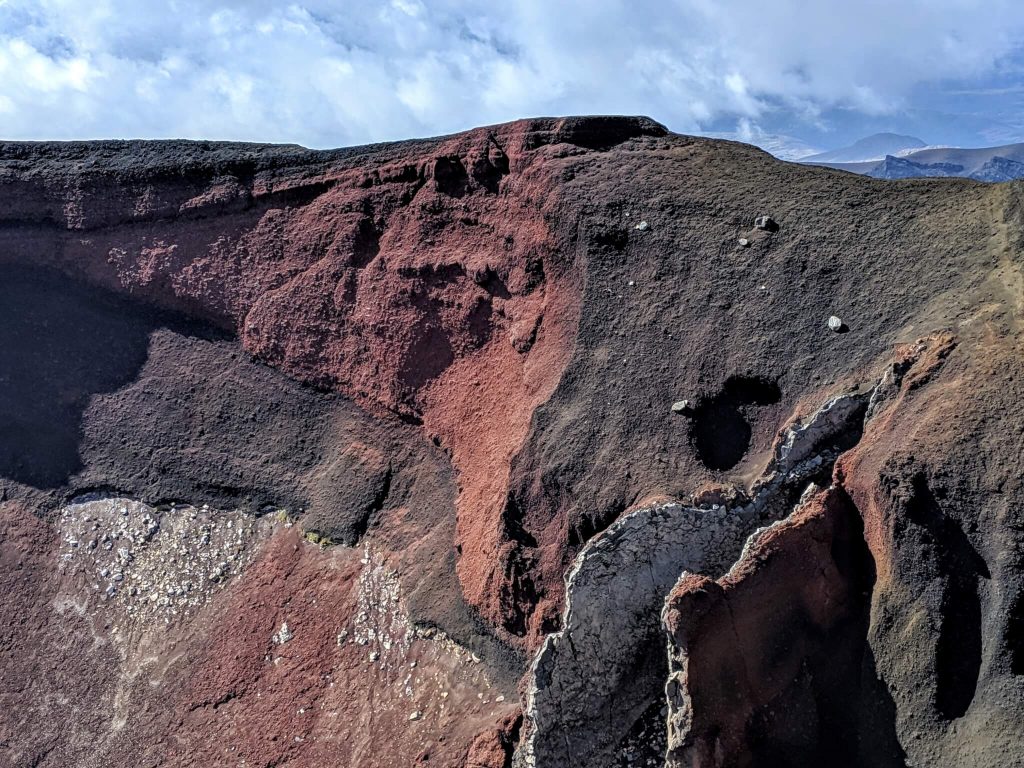 Across the moonscape of the South Crater I trekked, only to arrive at Red Crater, a magnificent, 14000-year old, deep burgundy scar cracking open the middle of the earth. Atop black volcanic scree, I scrambled to the summit of Red Crater while sulfur smells and steaming vents added dimension to the experience. My legs screamed from the slippery ascent; I thanked hindsight for a good pair of boots, a wind breaker, gloves, and a ski hat. 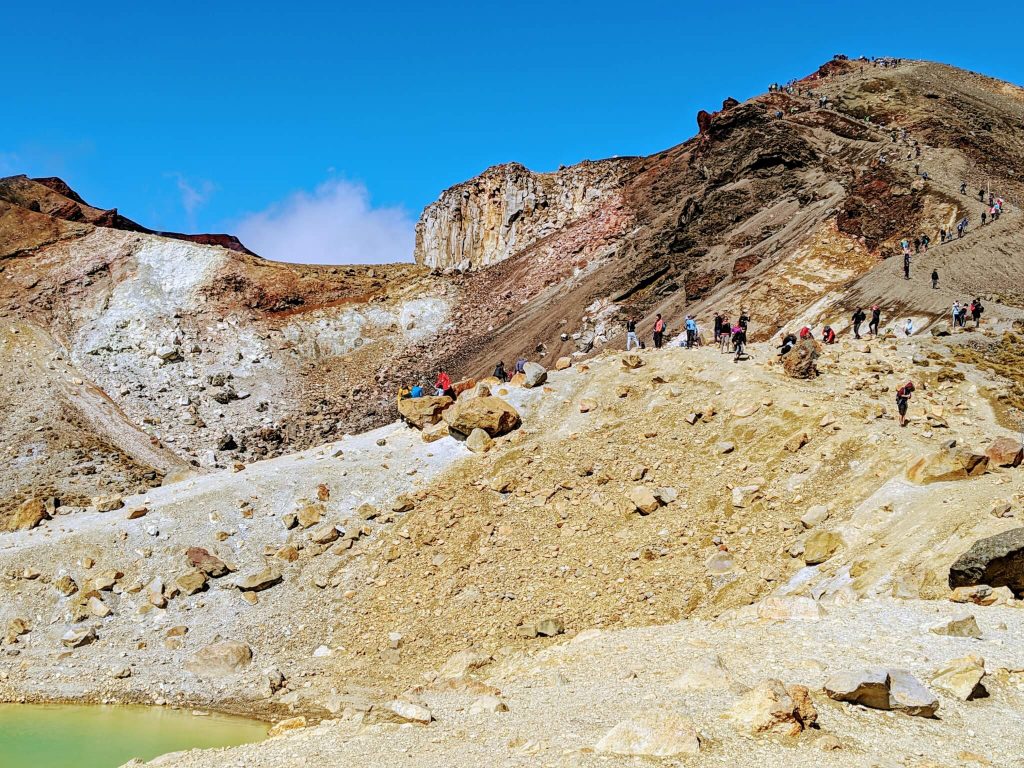 Red Crater’s summit invites a good break and incredible views of the Emerald Lakes. Alpine lakes always seem to sparkle turquoise and nectarine, and these gems were no exception. Their brilliance helped encourage me on as I made my way down the summit. I don’t know how folks in track shoes made it. Steep, with two-foot deep scree fields of volcanic stones, pebble and ash challenged the best placed footing; many people slipped and slid their way down the fin of Red Crater. The highest percentages of rescue occurs here. And in timely fashion, a rescue helicopter circled as I descended. 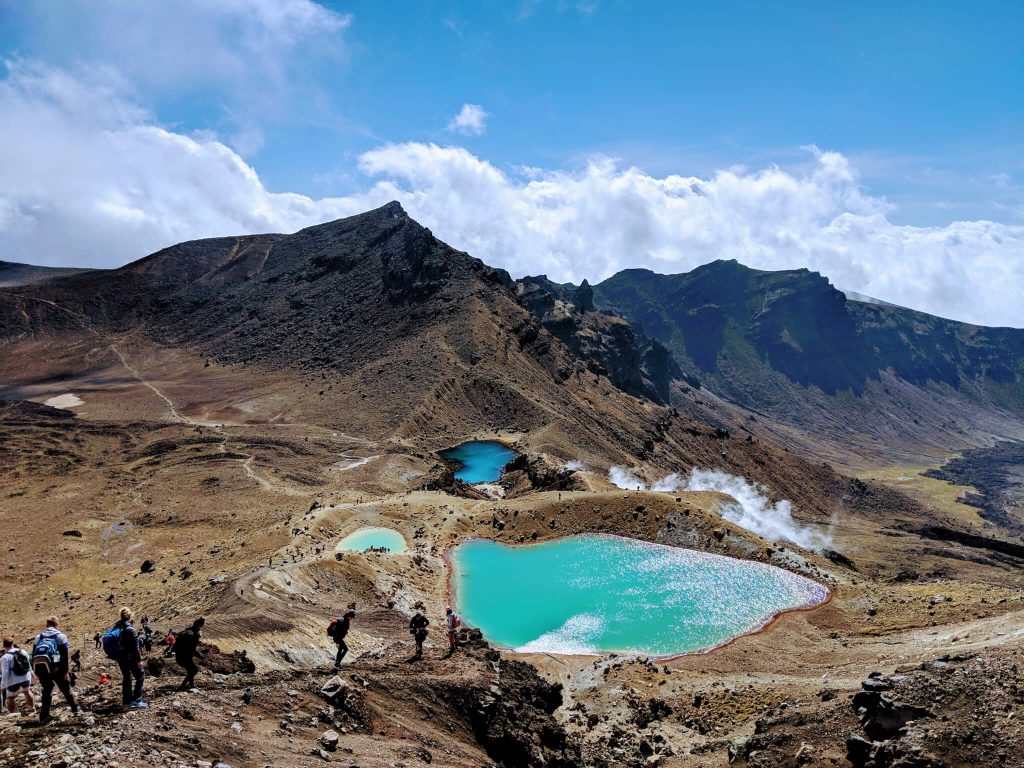 I matched the orange from my tangerine to the colors of the Emerald Lakes as I rested and watched folks struggle on the downhill. It had taken me about 2 1/2 hours to get to this point, which was not quite halfway. I had the goal to catch the first 1:30 shuttle. Would I make it?

The next section offered up a pleasant and relatively flat meander above the tundra and on the way to sacred Blue Lake. And then began the *relentless* downhill of Tongariro Alpine Crossing. First on a pebbled path and then on a boardwalk, the descent begins for a horrific 10K. Zig zagging through golden-colored tussock and purple heather, its feels endless. A shelter breaks up the monotony, and deep views to the steaming Te Maari craters help.

From purple tundra to gray moonscapes, from deep burgundy craters to nectarine lakes, and from golden tussock to finally a green forest of oaks and pine, my body was thrilled to get back into shade and onto an undulating forest path for the last 5 km of the walk. Although still downhill, the trees provided needed shade and a nice end to a long trek.

Drug Dealers, Lemurs or Lahars Ahead 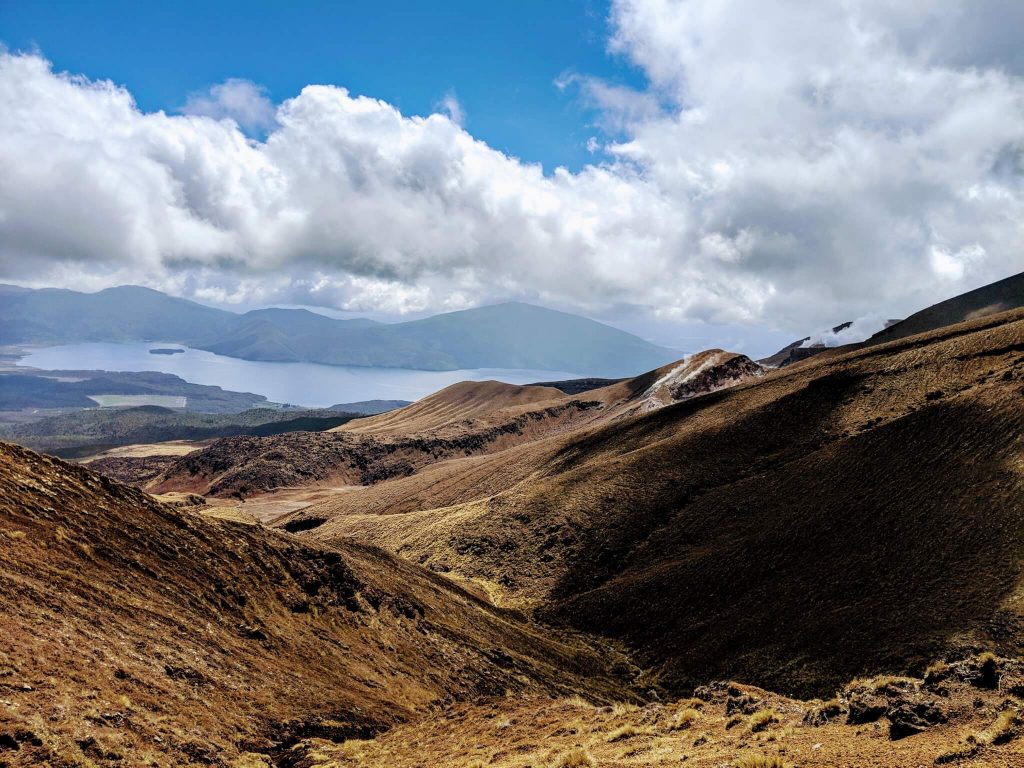 And then the warnings appeared.

“Lahars possible. If you hear a sound up creek, do not approach. Run the other way.”

What the heck? I had no idea what a “lahar” was. A drug dealer? A New Zealand animal similar to a lemur? Why would it be coming from up creek?

So deep in the bottom of my legs, I found the adrenaline to hustle through the lahar zone. Scared to death I’d be either eaten or shot, my exhausted legs found cadence with my beating heart, and I scurried my way to the trail’s end without even taking a picture of the warnings.

There I found the definition for “lahar”: volcanic or lava flow.

Fortunately, no eruptions occurred that day except maybe my heartbeat!

Thus, I finished my 20 km trek through Middle Earth and its Mount Doom. I soon found out that Mount Ngauruhoe didn’t actually appear live in the Lord of the Ring films. It’s a sacred mountain, like the lakes that surround it, and the film crews weren’t allowed to film them. Instead, the took photos and digitized them for film. Scenes were shot elsewhere, but that didn’t stop fans from experiencing their own version of Middle Earth on the Tongariro Alpine Crossing.

As for me, I’ve got some movie watching to do! As for the 1:30 shuttle, I missed it by 2 minutes. I guess the lahars didn’t scare me enough, but an hour break in the shade was a nice treat. Should you hike the Tongariro Alpine Crossing? Definitely. But, be prepared, have your ten essentials, absolutely wear boots, and perhaps you should bring your best Hobbit outfit.