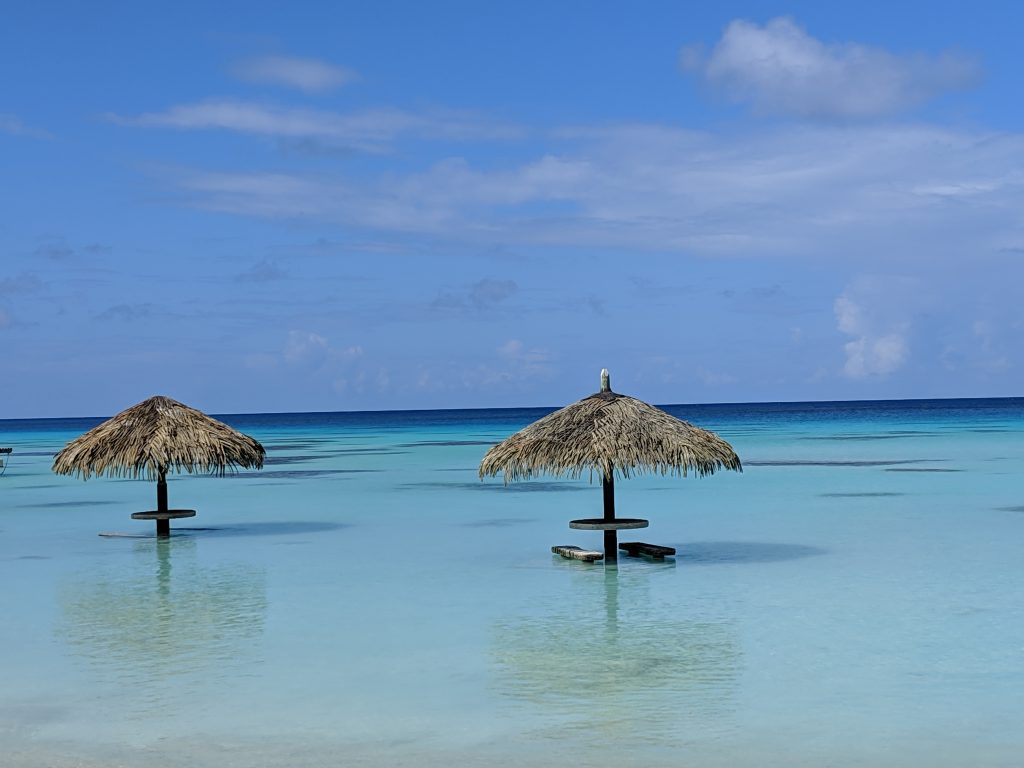 Far from everywhere else in the world and perhaps close enough to paradise, you’ll find the tiny atoll of Fakarava. Part of French Polynesia, this narrow strip of 850 inhabitants is also home to the best scuba diving in the world.

The cruise ships come in near the airport at Rotoava, which is where you can enjoy a nice afternoon walking or biking Fakarava. 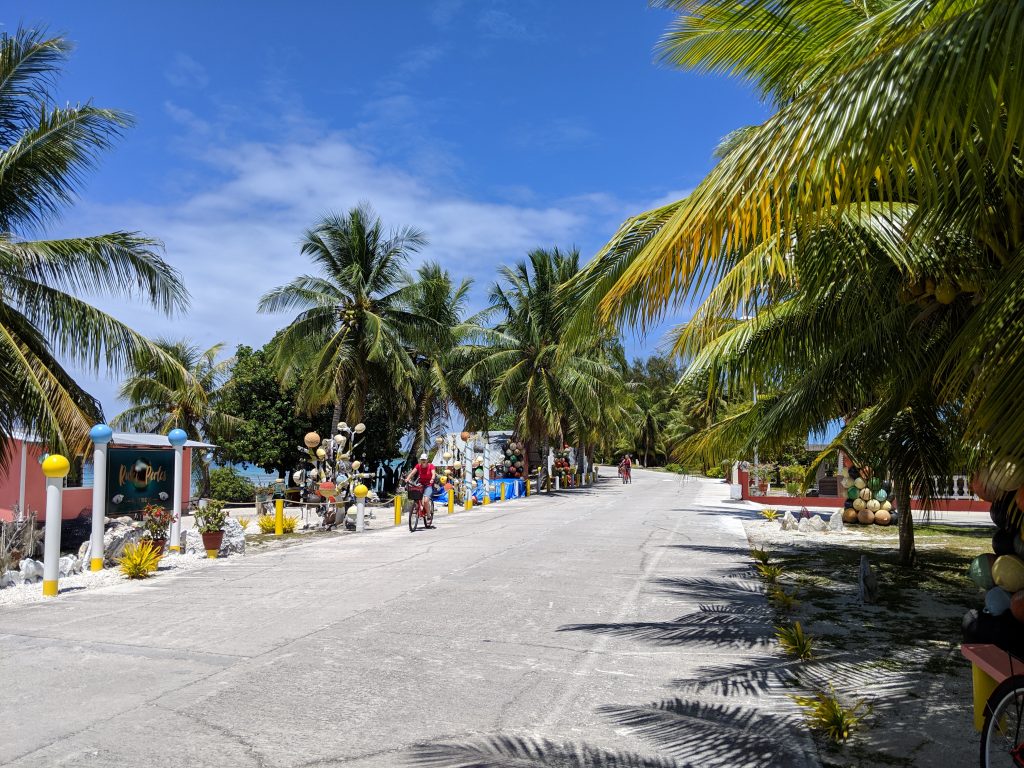 I arrived via cruise ship on my way from Easter Island. I thought a bike ride might be a fun idea to spend our four hours in port. Immediately in the very small “port” of Tekopa Village, I found two bike rentals. It wasn’t clear that they were separate as there were many people lined up to get bikes at one place and none at the other. I asked at the place where there was no line and the prices were cheaper and bikes were better. I grabbed a bike for 3 hours and $15, and off I went to the east and then south to enjoy the atoll.

I’m sure every picture you’ve ever seen of French Polynesia must be from this lodge!

I stopped and took a few pictures, then back on the bike I journeyed. The road straightened out and headed about 10 miles to the southern tip of the atoll. I could see the ride would be very boring and in the wind. I stopped and checked out the eastern shoreline to see the coral-dense, wind-swept shore. Not a diver myself, I could certainly see evidence of why a dive would be outstanding! Broken pieces of red, white, and purple coral sprayed like confetti along the tide line.

To the Airport and Lighthouse! 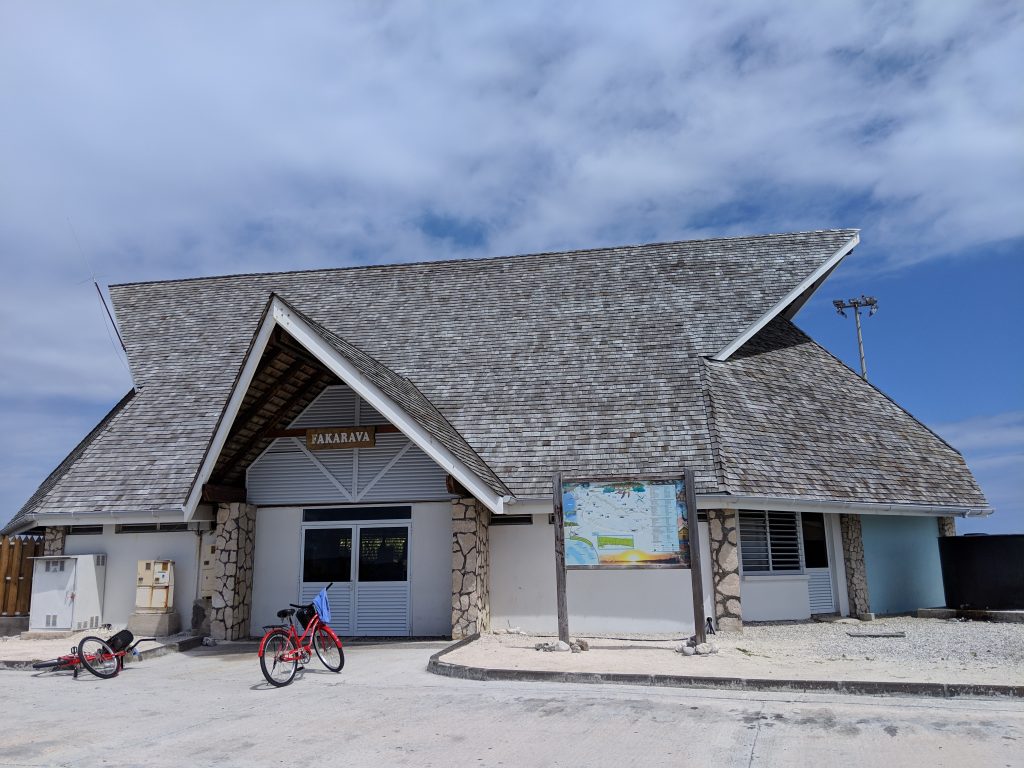 I decided to head back whence I had come, passing the church and the tiny village to make my way to the airport, which was closed for the day due to no flights. I imagine landing there would be exquisite from the air if not downright knuckle-biting. From there, I made my way back to the wonderful Topaka Lighthouse, a stone structure shaped like a pyramid that stands 45 feet high. 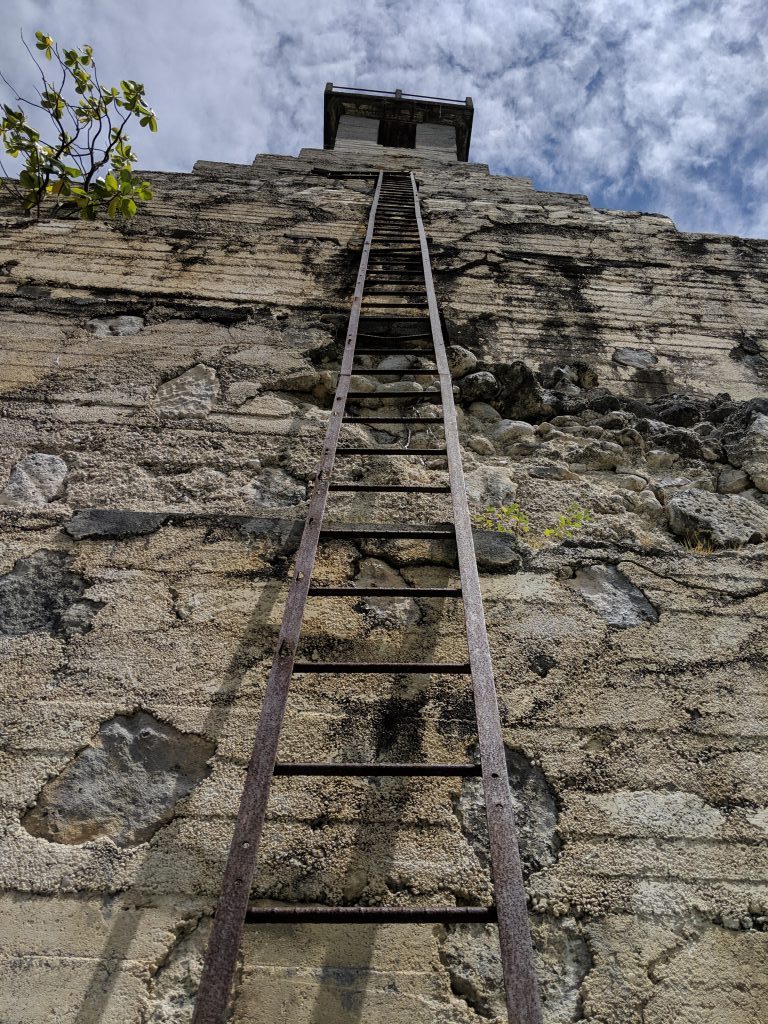 There was no “no climbing” sign on the side of the lighthouse, so up I went. I’m sure an official would have given me a ticket or a stern warning. But none the less, I couldn’t resist the rickety, rusted ladder! The views were totally worth the risk. 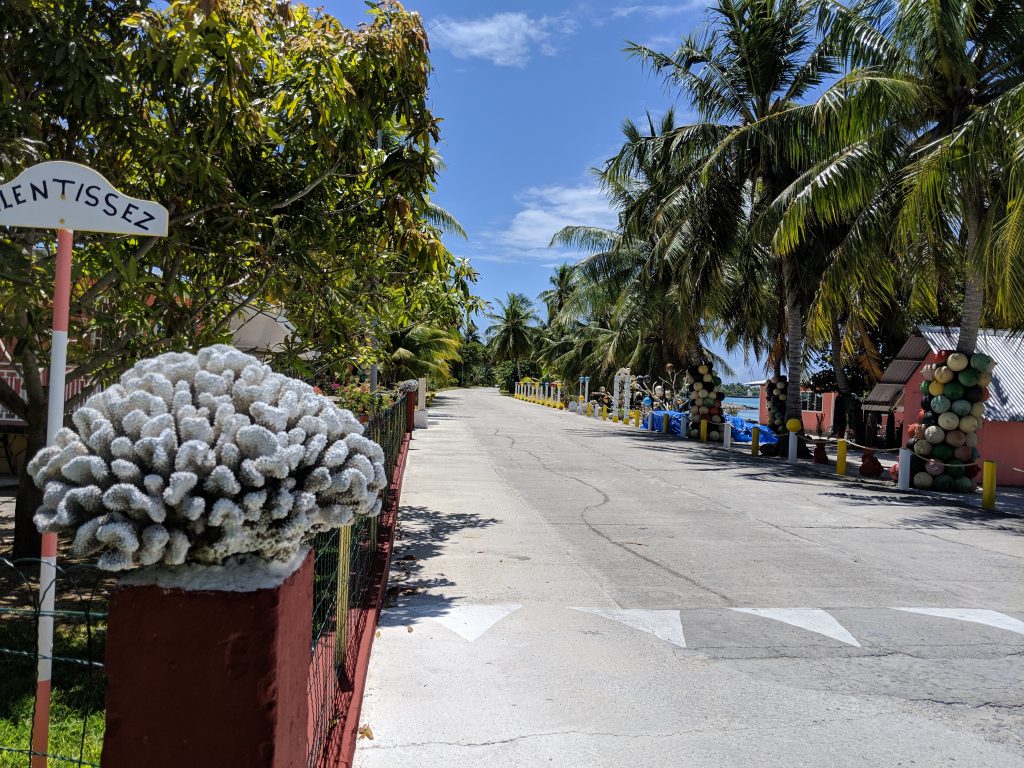 After a few minutes, I hopped back on the bike and journeyed through the darling bump in the road back to the bigger bump in the road. The insta-worthy palm trees loaded with washed-up floaters and the seashell columns topped with signs that reminded us to relax (in French) were charming. If the surrounding views didn’t remind you to relax, the atmosphere of this little burg would.

Walk to the Church 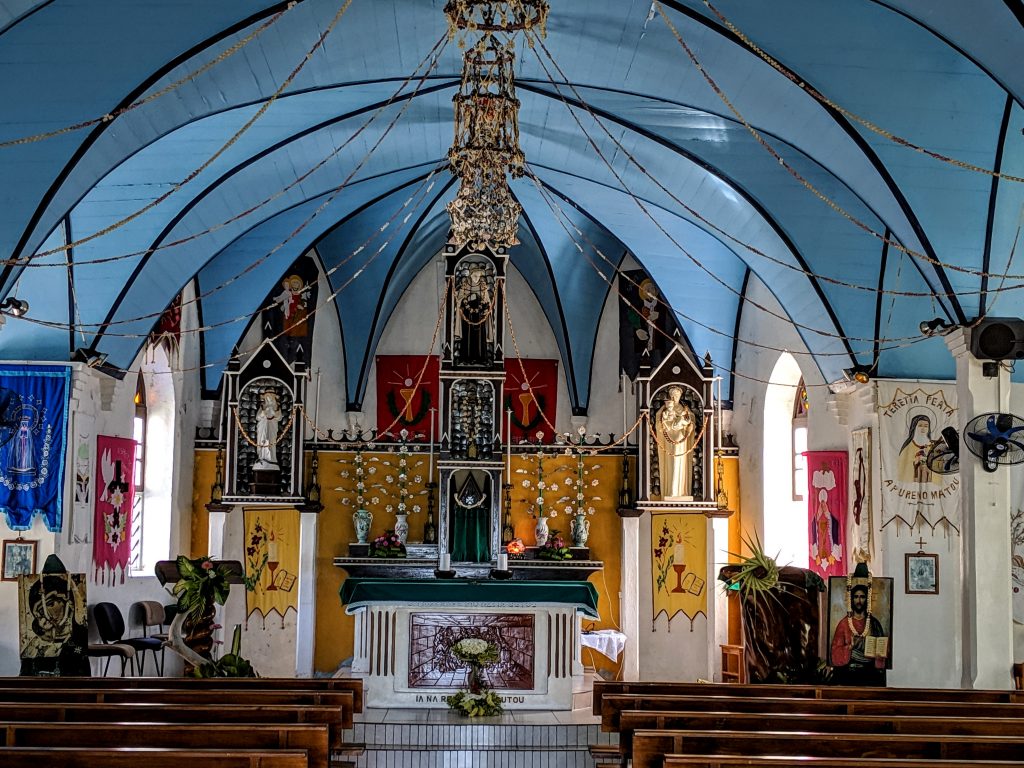 The three hours of my bike rental were up, so I returned to the port and dropped my bike. From there, I walked to the quaint Église de Jésus Christ des Saints des Derniers Jours. Its bright blue interior dotted with strings of shells hanging from the rafters gave the authentic island vibe that we all search for. Around the back of the church, I found a charming cemetery that I couldn’t resist a wander. Similar to the one on Easter Island, a Christian/Polynesian vibe decorated the graves.

I continued my walk to back to the original lodge where I had stopped on my bike. A sweet little cafe, the Rotoava Grill, sat in the sand. I joined some friends where we drank tropical drinks and local beer while imagining a quiet, kickback lifestyle living on a small atoll in the middle of the Pacific. 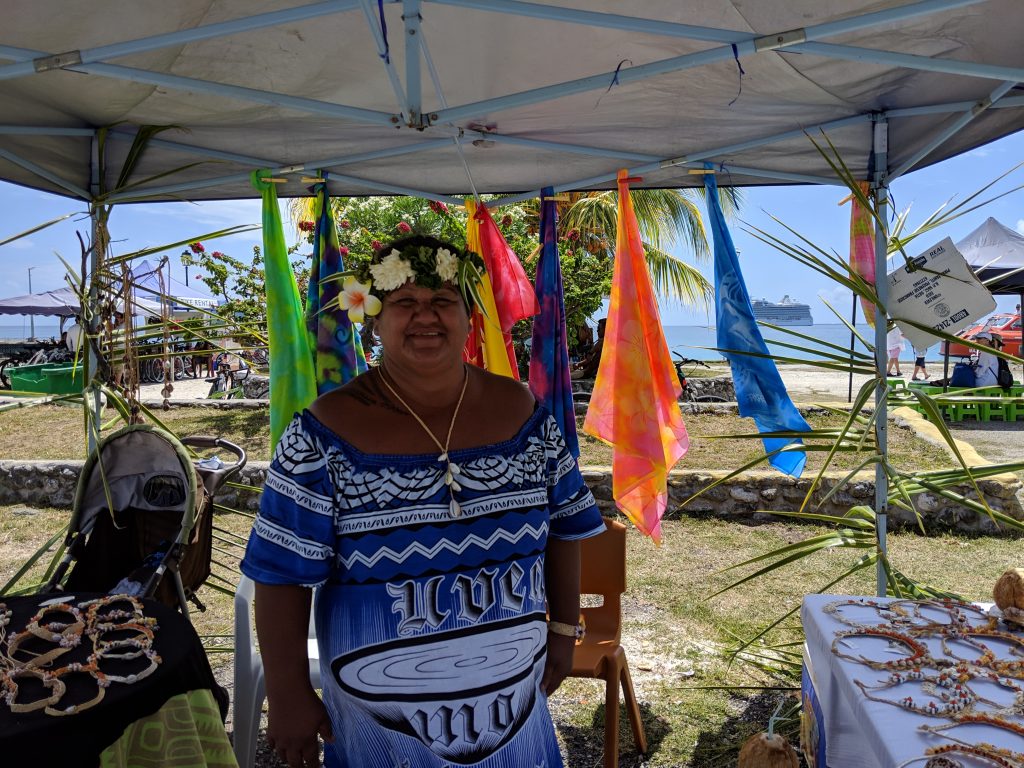 Eventually, I returned to the port. A few vendors had set up, offering shell and flower jewelry. Their children sat around playing on cell phones, and locals played local music on ukuleles and drums. In about four hours, I had ridden my bike about 5 miles back and forth to the major sites. I then walked about 1 1/2 miles up and down the main drag, enjoying the gorgeous views and local libations.

Fakarava is not a big place. On a cruise through French Polynesia, it was my favorite stop after Easter Island. It’s yet to be spoiled by the cruise trade. You can certainly enjoy the main area by foot, but a bike would get you a bit further to the lighthouse and airport, which are worth the ride.