I cried the first time I saw the Easter Island statues, the Moai. 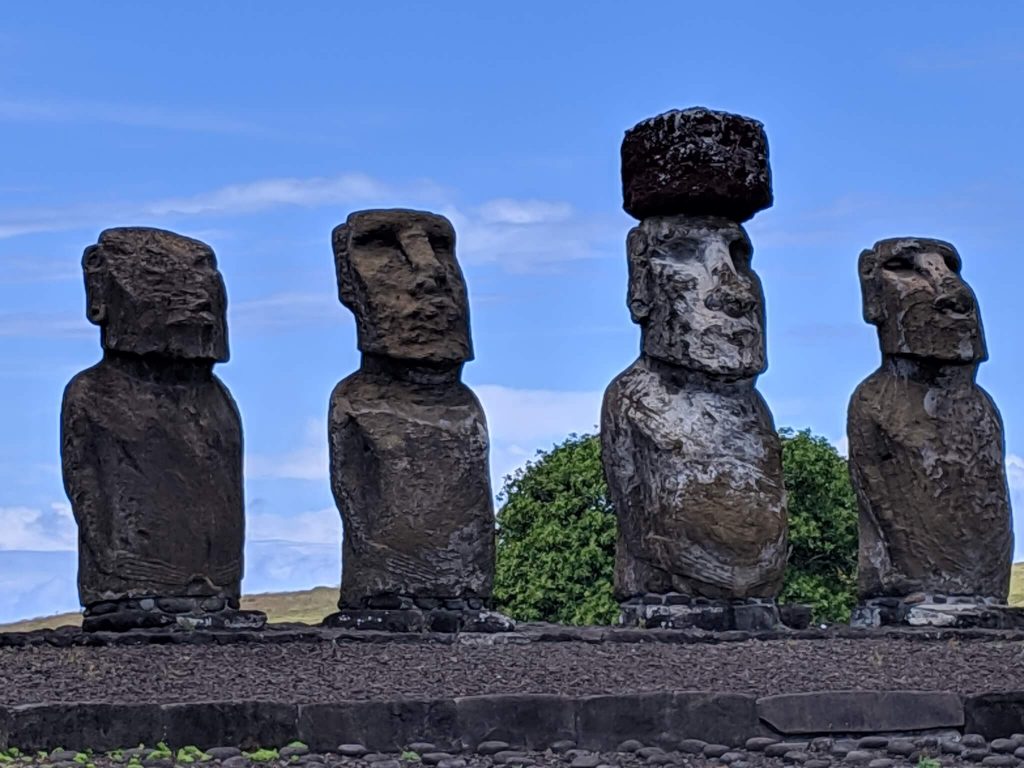 Maybe it was that I had been waiting since 5th grade to see these magnificent sculptures, or perhaps it was the exceedingly difficult bike ride I had taken to get to the best site. Either way, I wept.

Getting to Easter Island, now officially called Rapa Nui, its local name, had been a life-long goal. Pricing out the adventure put the trip into the “when I can afford it” category, which I soon realized was going to be never. So I booked it. Whether you fly, take a cargo ship, hitch a ride with the Chilean Navy, or take a cruise, getting to Easter Island is both a challenge and/or expensive. I went via Oceana Cruises.

Renting a Bike on Easter Island 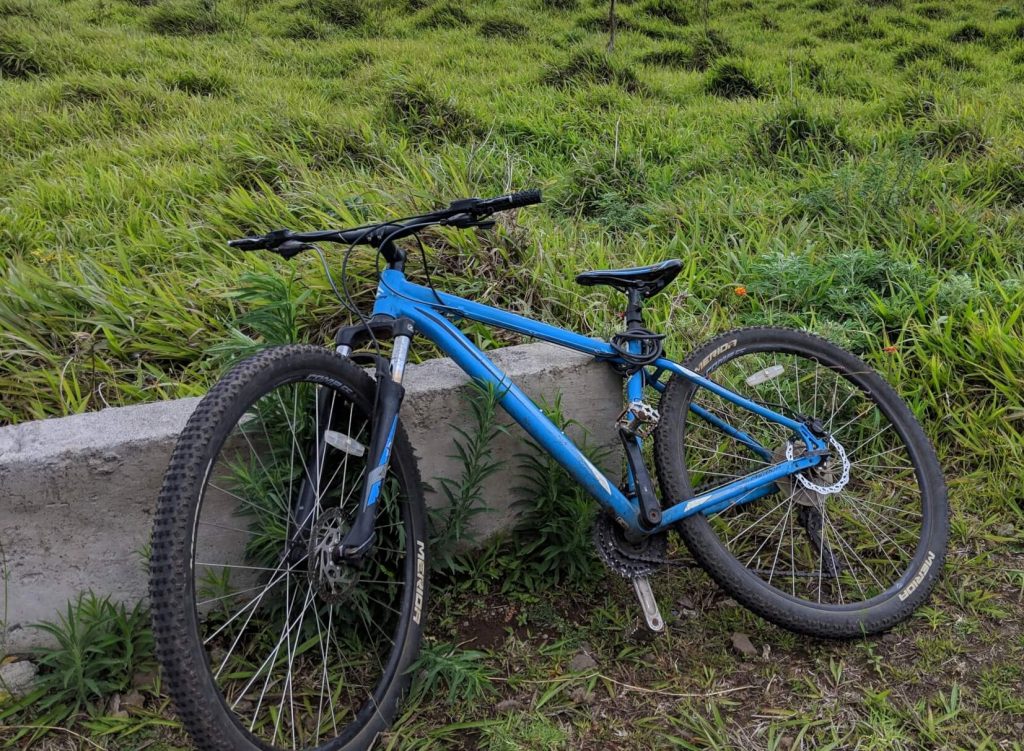 Once we arrived to Easter Island after five days of sailing, I watched everyone board vans into over-priced and over-stifling tours and decided I wanted to enjoy the culture on my terms. I rented a bike on the first day, and on the second day, I set out by foot to see the Rapa Nui Easter Island Moai statues.

I walked the mile from the cruise terminal to the centro, where I found three bike shop rental places next door to each other. Two rented bikes for 24 hours, and one rented for 8. I chose the 8-hour option, paid about $15, picked out a sturdy mountain bike with 30+ gears, and headed out for a 40 km ride. (See below for where I walked on Easter Island and how you can see Moai without paying for guides.) 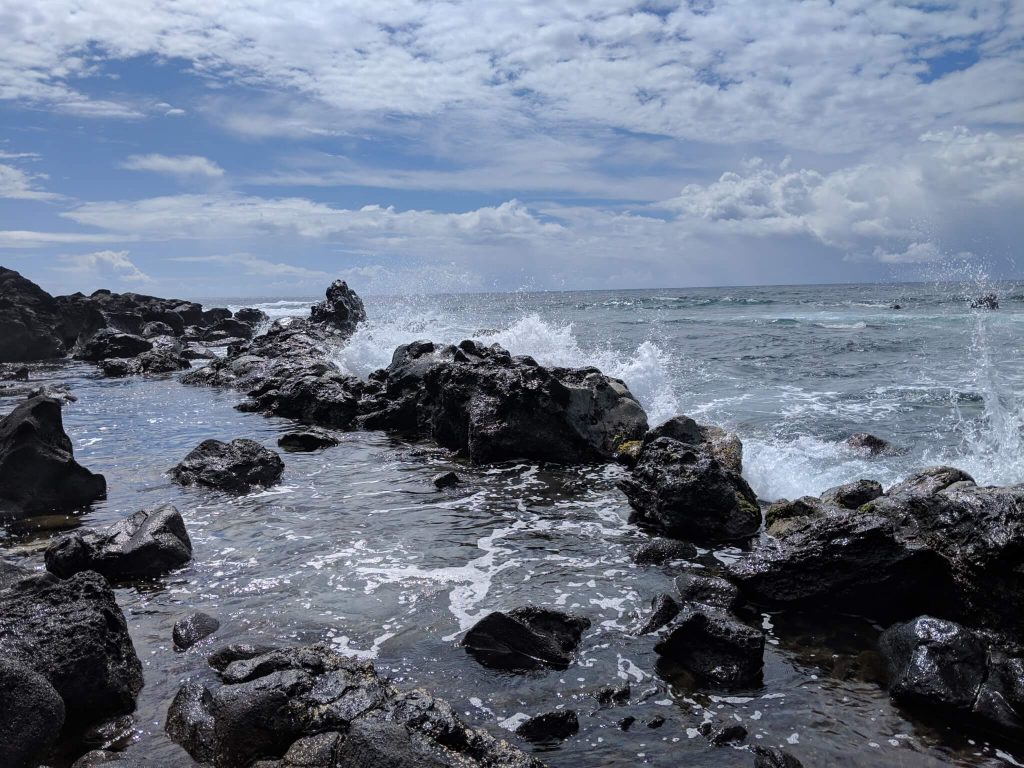 Easter Island has one main road that makes a loop around the south side of the island to its eastern edge and then back to town through the center of the island. You can bike in either direction. I chose to take the coastal route first and then to loop back to the city at the end of my day. It was the perfect choice. I used every gear on my bike.

The coastal road is bumpy. Terribly, awfully, bumpy. The hard saddle of my bike tortured my bottom, making for a very uncomfortable day after about 10 km. Between the dirt roads and the pot-marked asphalt roads, I powered through the bumps by focusing on the shear beauty of the ride. With the vast Pacific Ocean on my right glittering its deep blue waves and the grassy edges of the island dotted with Rapa Nui horses and free ranging cattle, the kilometers passed quickly.

A First Glimpse of Moai 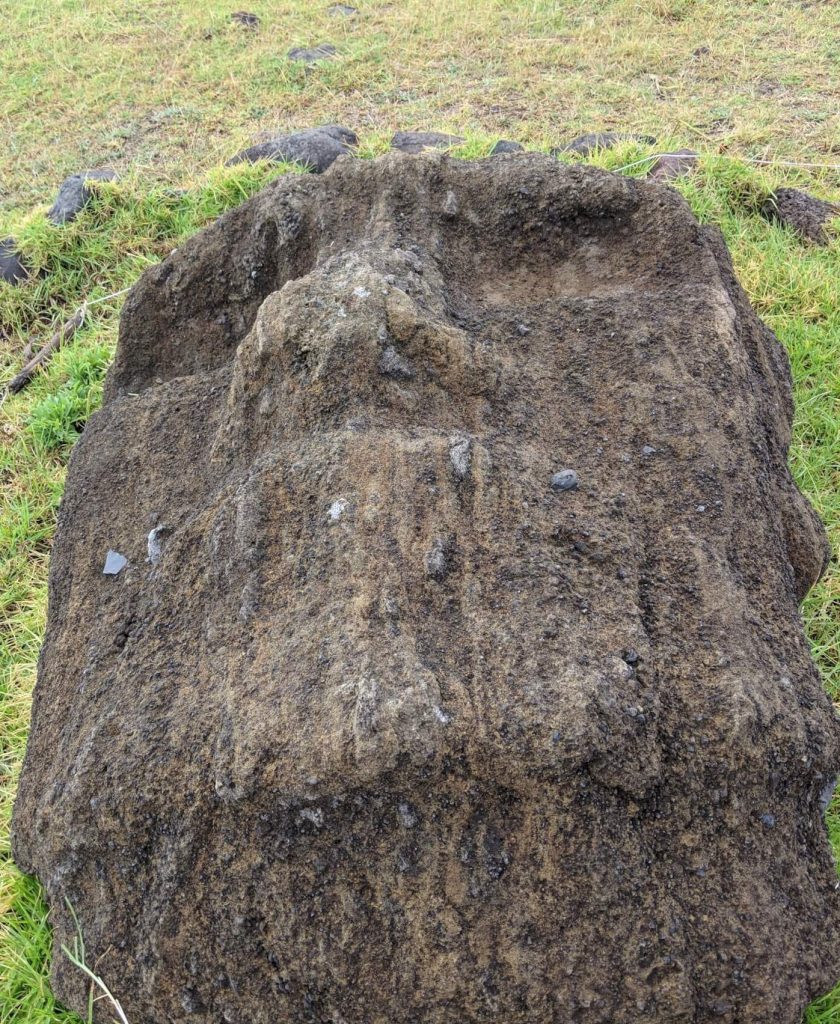 Prior to arriving at my first stop, I had attended a few lectures by James Grant-Peterkin, a linguist turned tour operator who has lived on Rapa Nui half his life and authored A Companion to Easter Island. The info he shared prepared me for my first glimpse of these fabulous ruins at the historic Vinapu site. Here, the remains of two large Ahu and what was left of a female Moai captured my imagination and set the stage for the rest of the day.

I continued along the coastal route, stopping at the various sites, where I continued to find toppled bits and pieces of the Moai. Each interpretive sign, together with what I had learned in lecture, put together the Rapa Nui story of why the statues were toppled.

The Ocean Breezes of Easter Island 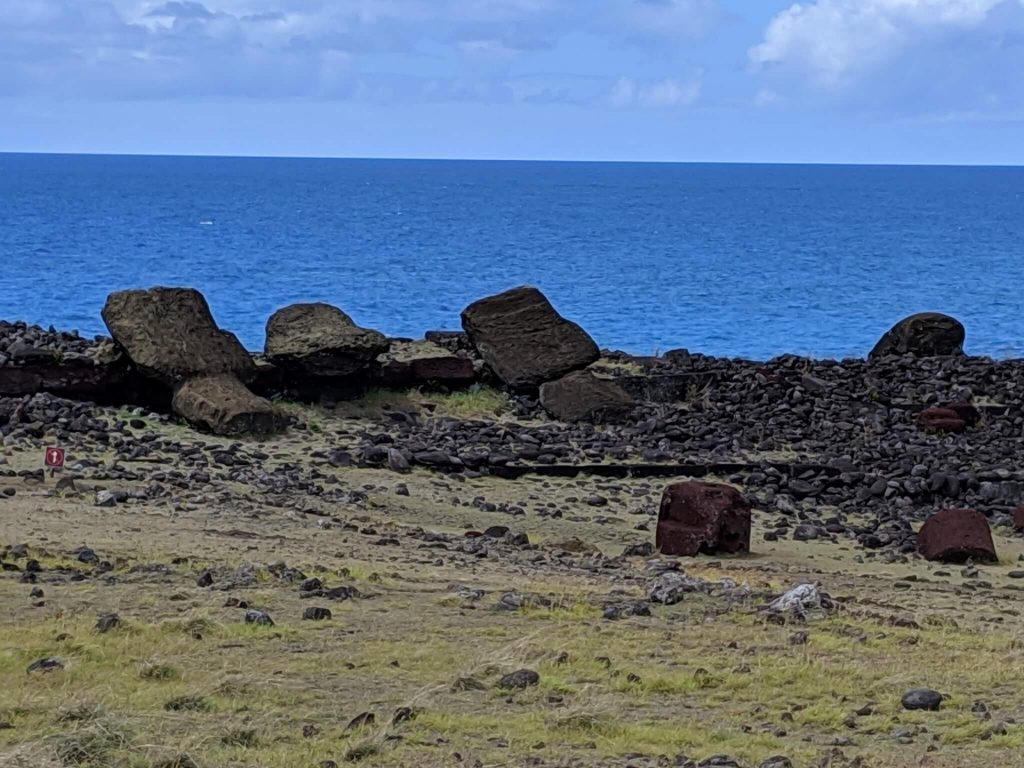 Then the ocean breezes set in.

Most folks would call them breezes. On a bike, traversing potholed roads, I’d call them gale-force head winds. I have to admit, I struggled. I started wishing I’d blow a tire or that the chain would break so that I could call a rescue and gracefully duck out of this bike adventure. Sadly, the bike wouldn’t fail.

My legs were burning when I passed the turnoff for the Easter Island quarry, or Rano Raraku. It was a 2 km downhill ride to the quarry and another 2 km back up that I knew would do me in. Not even halfway through this ride, I wanted to save my legs so that I could make it back to downtown, and thus, I bypassed the quarry.

That was a mistake. I regret missing the quarry, and now I have a reason to go back to Easter Island.

The Tears Poured Out 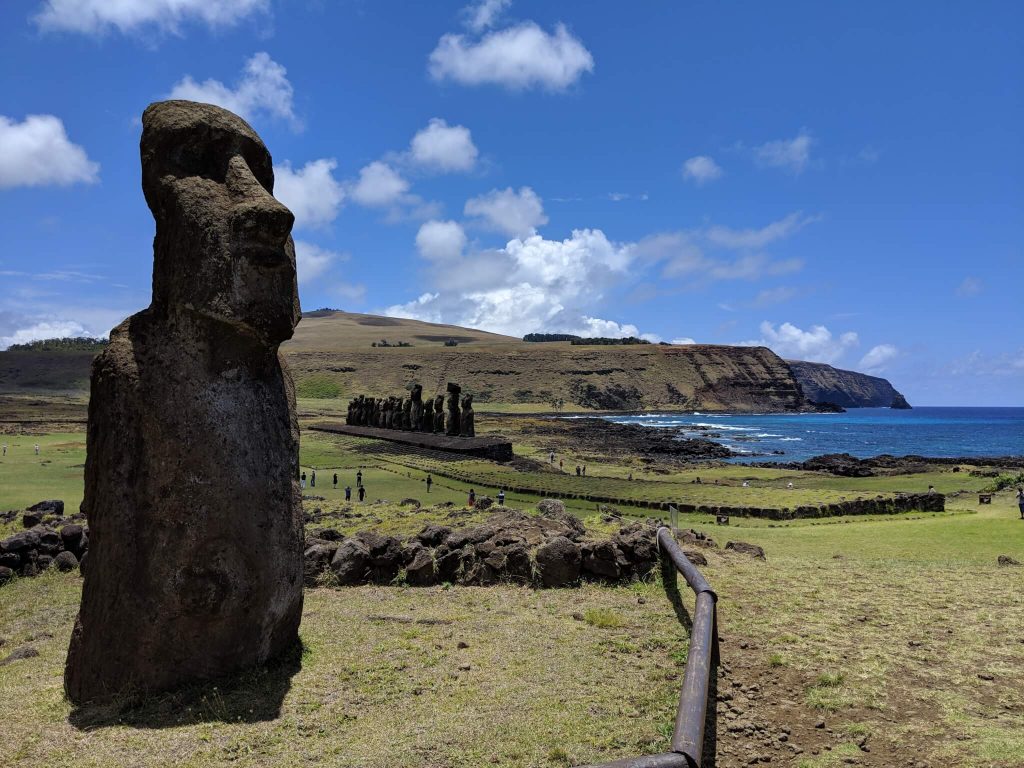 Thus, I continued up the hill to the pièce de résistance! The granddaddy of the Easter Island statutes. The Hanga Nui site. First I saw the crowds of people swarming out of their tour vans and crossing the road. Then I saw them.

All 15 Moai standing, looking at me; the Pacific Ocean lapping their backs.

And I cried. Big, weeping, alligator tears. Yup, my legs were on fire, but my heart was exploding. 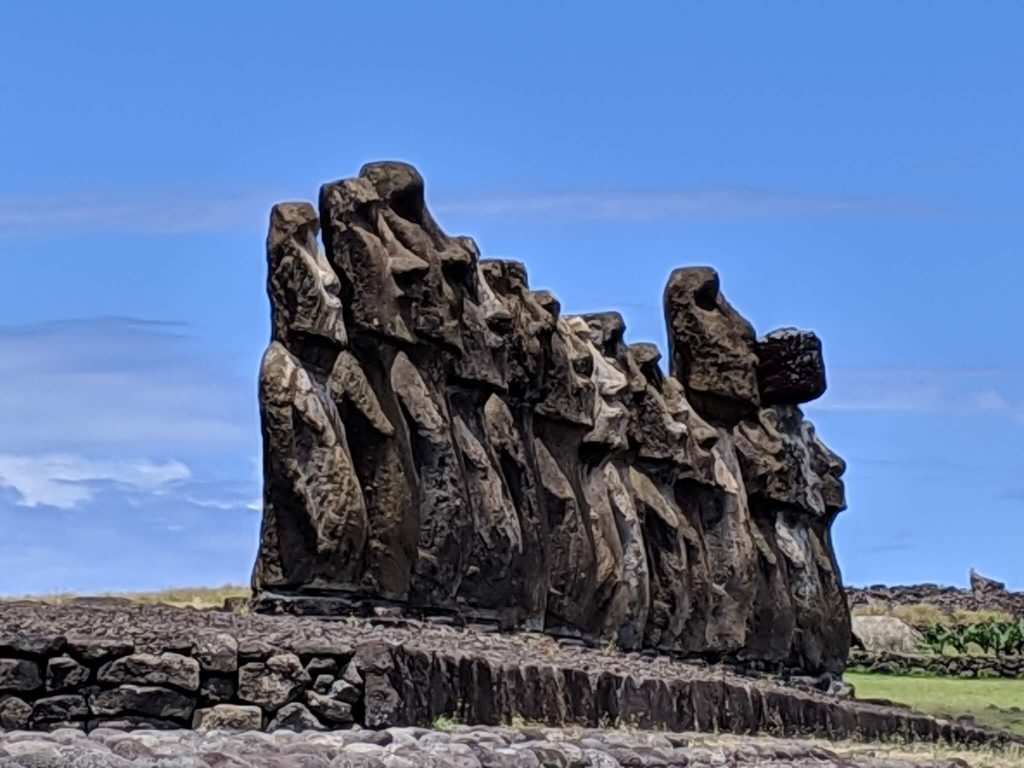 It was exactly what I imagined but now in technicolor.

I dried my eyes and explored the site, keeping a respectable distance and in quiet solitude. I found that biking here had been the best choice. It allowed me my own personal approach, arrival and exit from this sacred site where I could meander at will and avoid the tourist babble. The Moai deserve to be listened to. They have stories to tell.

From here, I continued north along the coastal route up to the other famous site, Anakena. Here, you’ll find shade, a small restaurant, gift stands and a beach. Sunbathers lay nearby the Moai, and a holiday vibe beats through the beach. I took a break, used the bathrooms, cooled off and appreciated the remoteness of this site and the entire island. 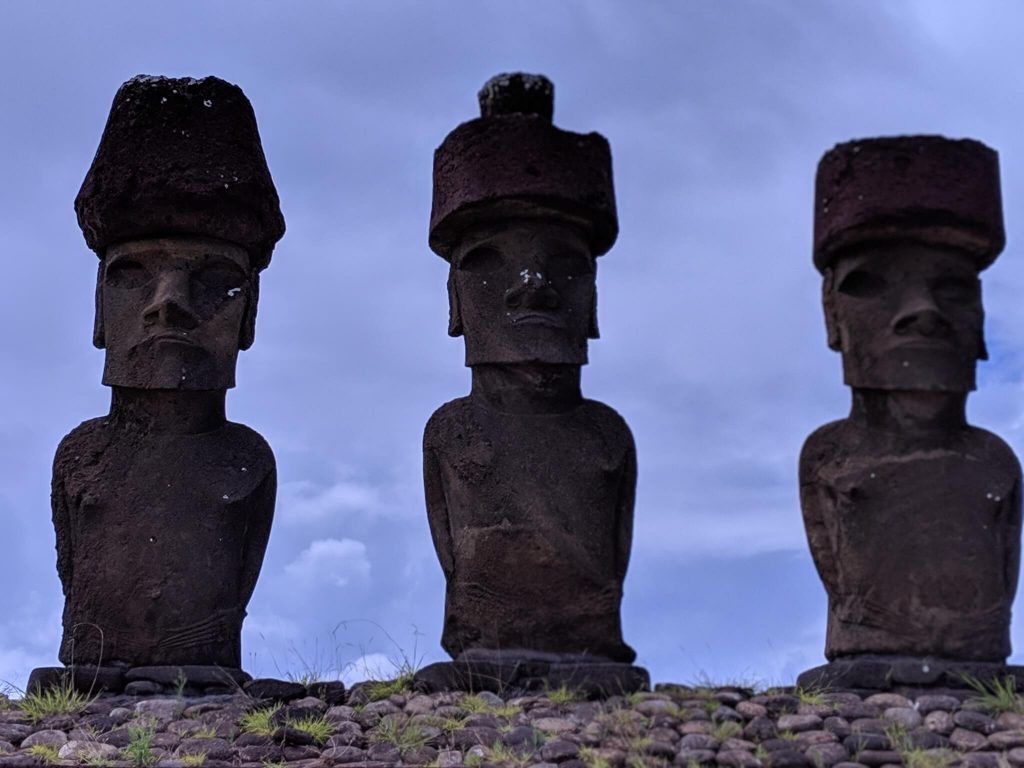 With refreshed legs and an inspired attitude, I headed along the center road back to town. Up. Up. Up. and more up. Straight up. For kilometers. Maybe 6 km? I thought I was going to die. Twice. Up. Up. Up. The good news is that the pot holes had disappeared, and the wind was now at my back. Thank god. Otherwise, I’d probably still be out there.

The ride back to town, after the Up, was mostly downhill and through a wonderfully-smelling eucalyptus grove. Whereas it had taken about 4 hours to get to the eastern site, it only took about an hour to get back to town. The total trip took about 6-7 hours with stops.

Bring water. Lots of water. And snacks. Lots of snacks. Don’t forget your sunscreen. I picked up all of these at the grocery in town before heading out on the ride. 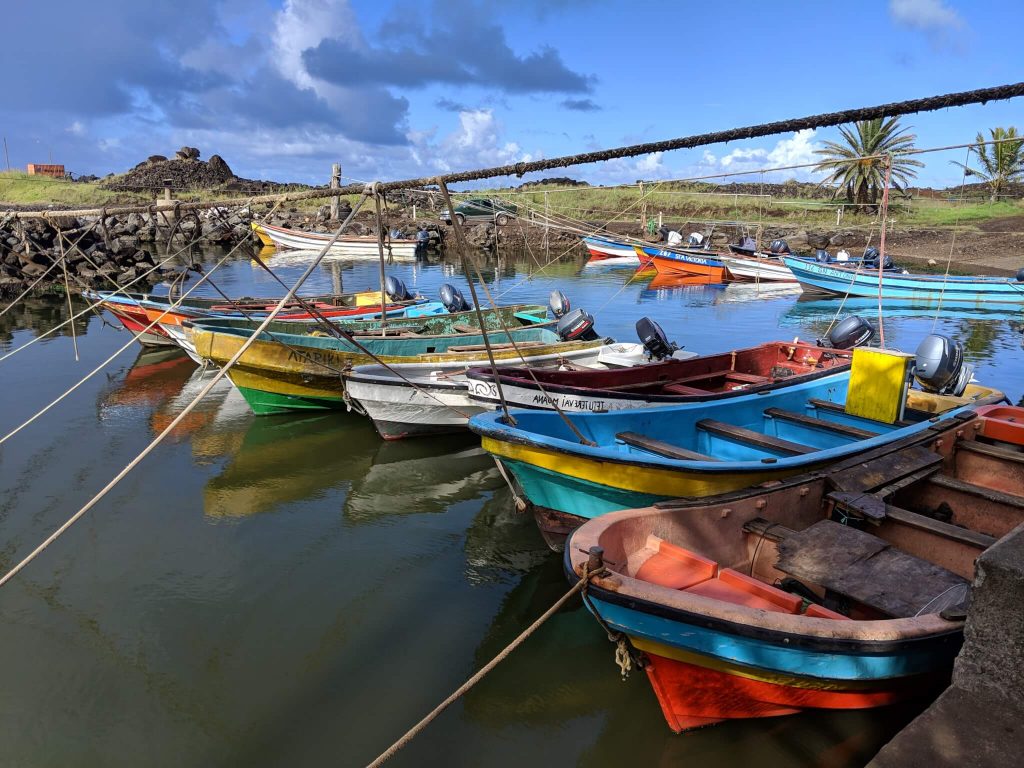 On the second day, my tired legs begged for a walk to move yesterday’s lactic acid out of my thigh muscles. So, again, I walked the mile into town and picked up a local map to discover that I could see many more Moai right in town. This is a great option for folks who don’t want to take a tour or spend a ton of more money seeing the Easter Island statues. There are plenty of fabulous sites right in town that you can access by foot. 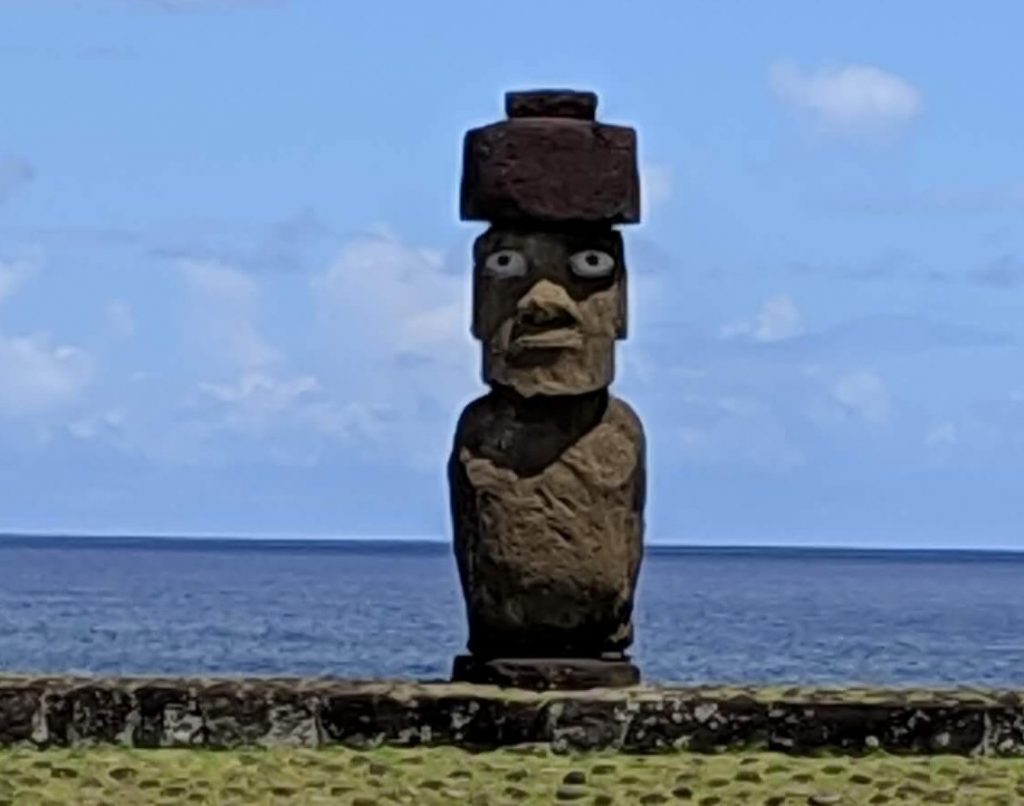 I spent the day walking Hanga Roa, Easter Island’s downtown center. I decided to walk the distance to the far point first at the north end of town, the Rapa Nui Museum. It took about 45 minutes to meander through town, along the red brick sidewalks, and up and down through a neighborhood to reach the museum. It was worth the effort.

Inside, the museum tells the tribal story of the wax and wane of riches and resources, explaining the Easter Island mysteries. It also pays tribute to Sebastian Englert, the padre and amateur anthropologist who was the first to document the Rapa Nui story. I also learned that Englert was a distant relative, a surprise addition to my genealogy story. 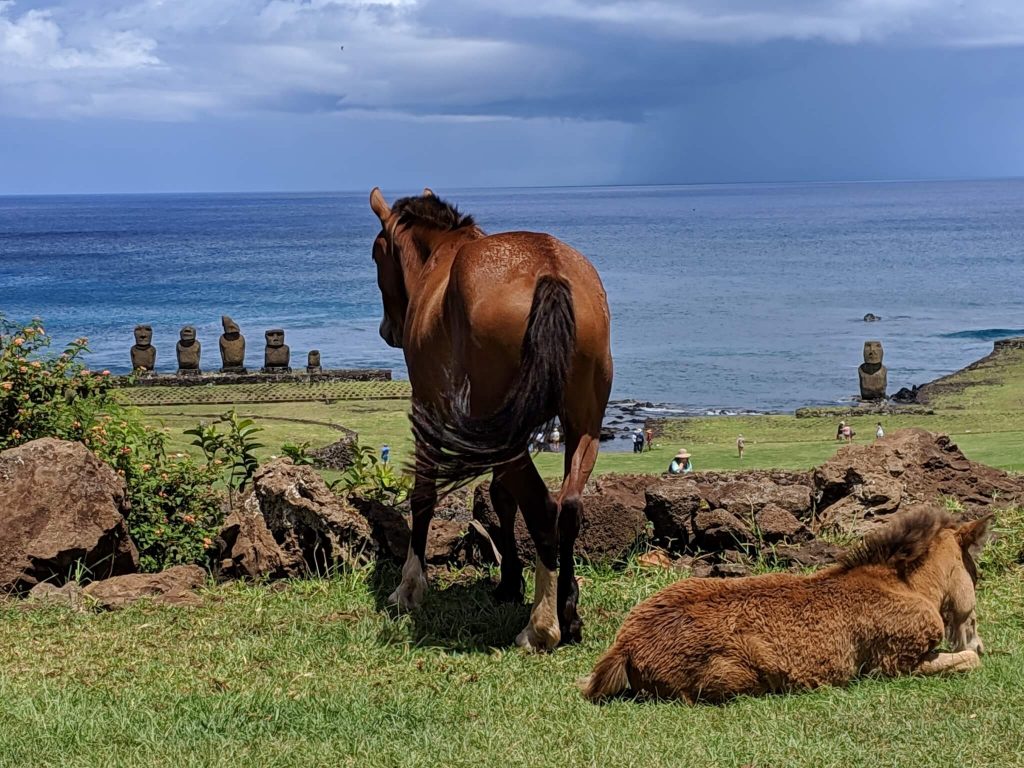 From the Easter Island Museum, I continued the walk down the hill toward Ahu Ko Te Riku site of several Moai, one with the famous eyes. If this had been my first view of the standing Moai, I would have cried. Instead, I enjoyed the few with a mother horse and her foal. 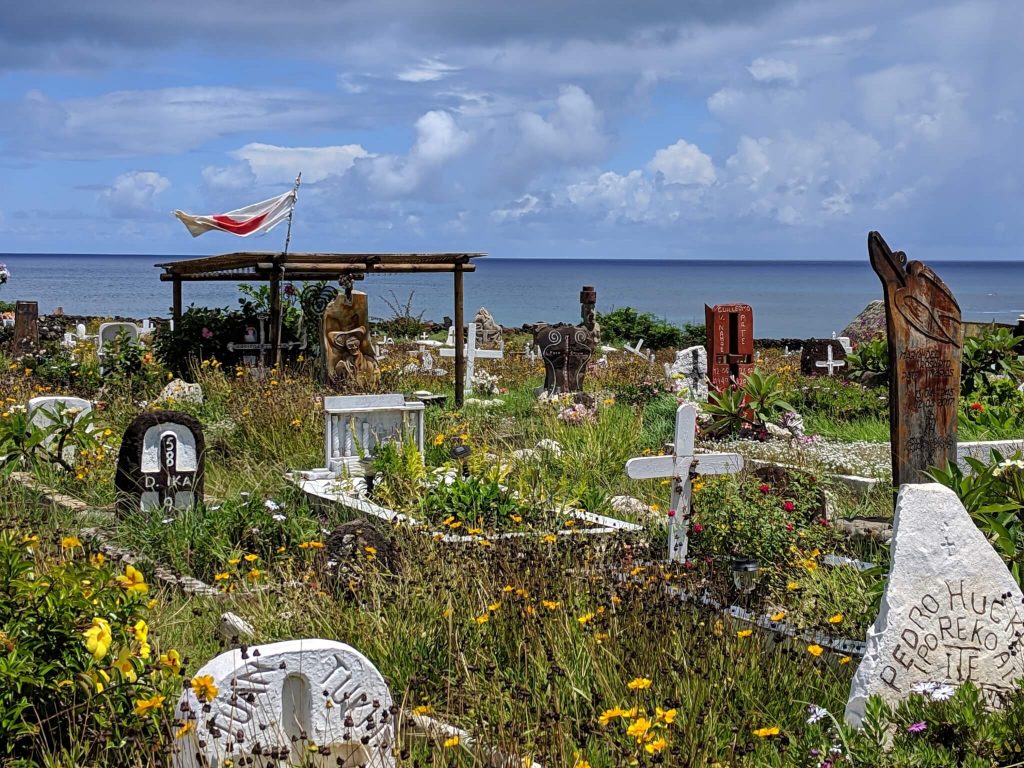 This set of Moai overlook the local cemetery which I couldn’t overlook. I jigged up the hill to learn more about the Rapa Nui culture and the influence of Christianity on the local population. The cemetery held crosses on each tomb, shells, teak sculptures and a Pacific echo. 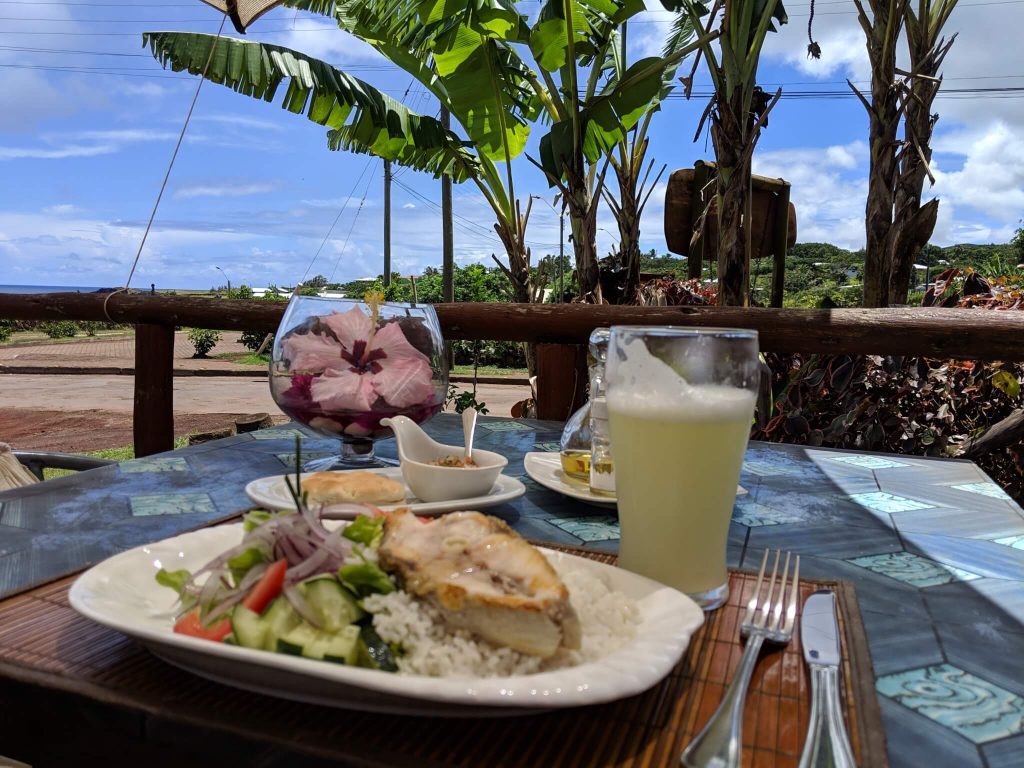 All this walking made lunch call my name. I couldn’t resist a stop at Manuia Restobar (Petero Atamu, Hanga Roa, Isla de Pascua) next to the cemetery where I enjoyed the catch of the day over steamed rice with a local salsa.

Get Your Passport Stamped then Go to Church 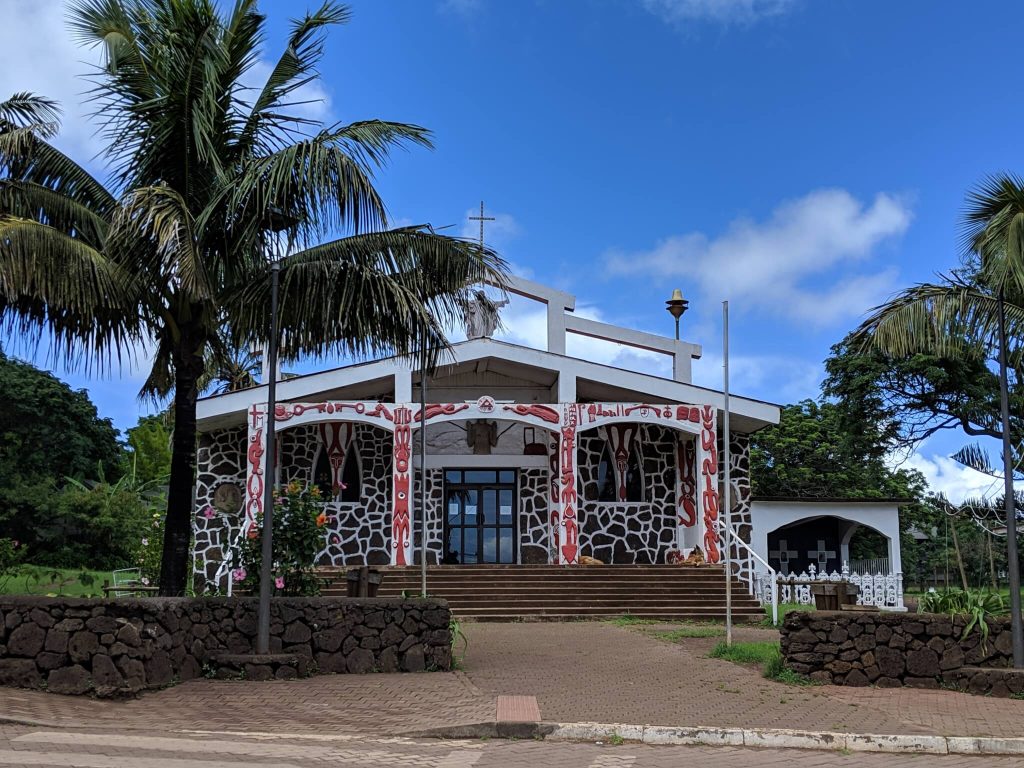 From here, my walk continued through town. I purchased some post cards and dropped them at the post office, where they also stamped my passport with an Easter Island ink stamp. The town’s road took me to the local church where Sebastian Englert had preached and was buried. I said my hello to him and visited the church inside to find a turtle on Jesus’ head and pews carved with fish. Stopping through here added dimension to a fascinating story that is not fully told in our history books.

By this time, I had run out of time. I had wanted to grab a cab to visit the Orongo site, which is famous for the Birdman competitions (read about them in Grant-Peterkin’s book.) But that, along with the quarry, will be the first two stops on my next trip to Rapa Nui, no longer called Easter Island.

Want to Go to Easter Island?

If you’d be interested in visiting Rapa Nui with me as a walking vacation, let me know. I’m seriously considering putting together an Easter Island Walking Vacation, and would love to hear of your interest. Besides the walking in Hanga Rua, there’s fabulous hiking elsewhere on the island I could incorporate. Let me know.