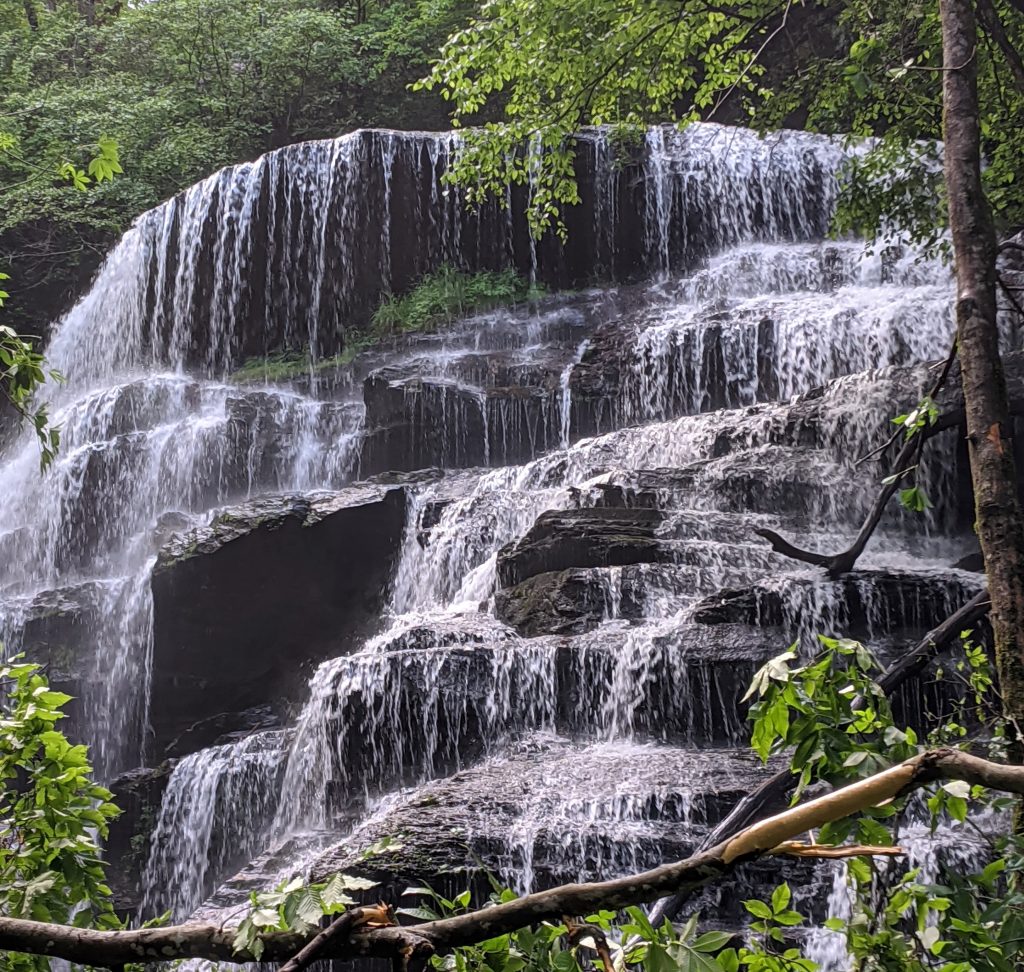 A lot of beauty exists in South Carolina. From the low country and its amazing beaches (see my article on hiking in Beaufort, SC), to its aristocratic view of southern culture in Charleston, there’s a lot of charm in South Carolina.

There’s a lot of ugly, too. As part of our 50 Hikes 50 States Project, I’m consistently shocked at how much history I do not know about the states we visit. Although I’ve been to every state, many of our country’s big cities many times, and I have even been awarded for my love of history, I consistently find that the more I learn, the less I know.

Which brings me to South Carolina. We flew into Greensville/Spartanburg airport(need suggestions on what to eat/see/do in Greensboro? Check out this post) so we could easily access South Carolina, Tennessee and North Carolina on this trip. On our way to our South Carolina hike, I pulled up Wikipedia’s entry about the state. This is something I’ve done for every state, and I’m frequently gobsmacked by historical tidbits my US History class seemed to overlook. 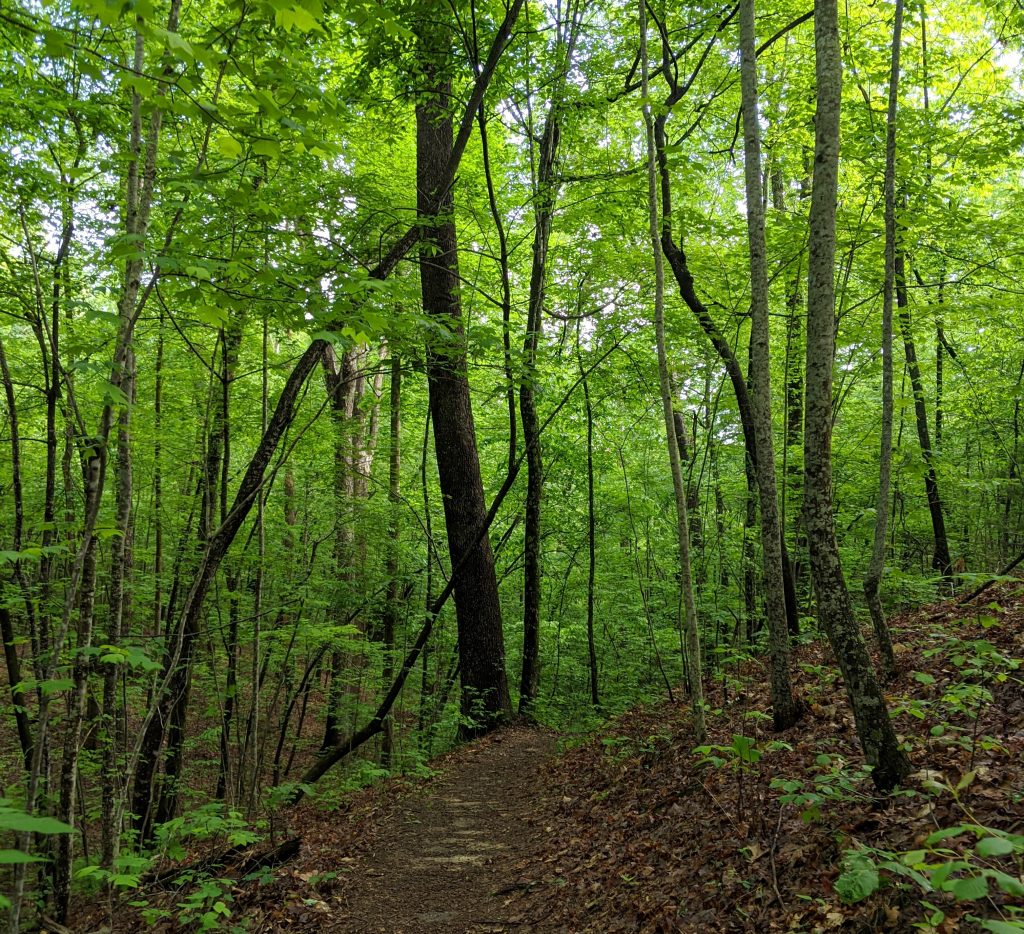 In this case, Wikipedia reminded me of the situation after the Civil War. I learned that the Supreme Court, in Texas vs. White , ruled that the states’ secession from the Union was illegal, therefore there was no need to legally readmit the states into the Union during the Reconstruction Era. South Carolina, though, had a tough time readmitting back to the Union, causing President Ulysses S Grant to suspend habeas corpus under the Ku Klux Klan Act, ultimately decimating the white supremacist leadership via the KKK and reunifying South Carolina.

I’m not here to retell the Civil War and Reconstruction history. What I am here to say is that learning is a life-long experience, and taking the time to follow links and research a bit always leads to interesting conversations and re-evaluations of our beliefs. And now, more than ever, is the time for all of us to think about what we know. 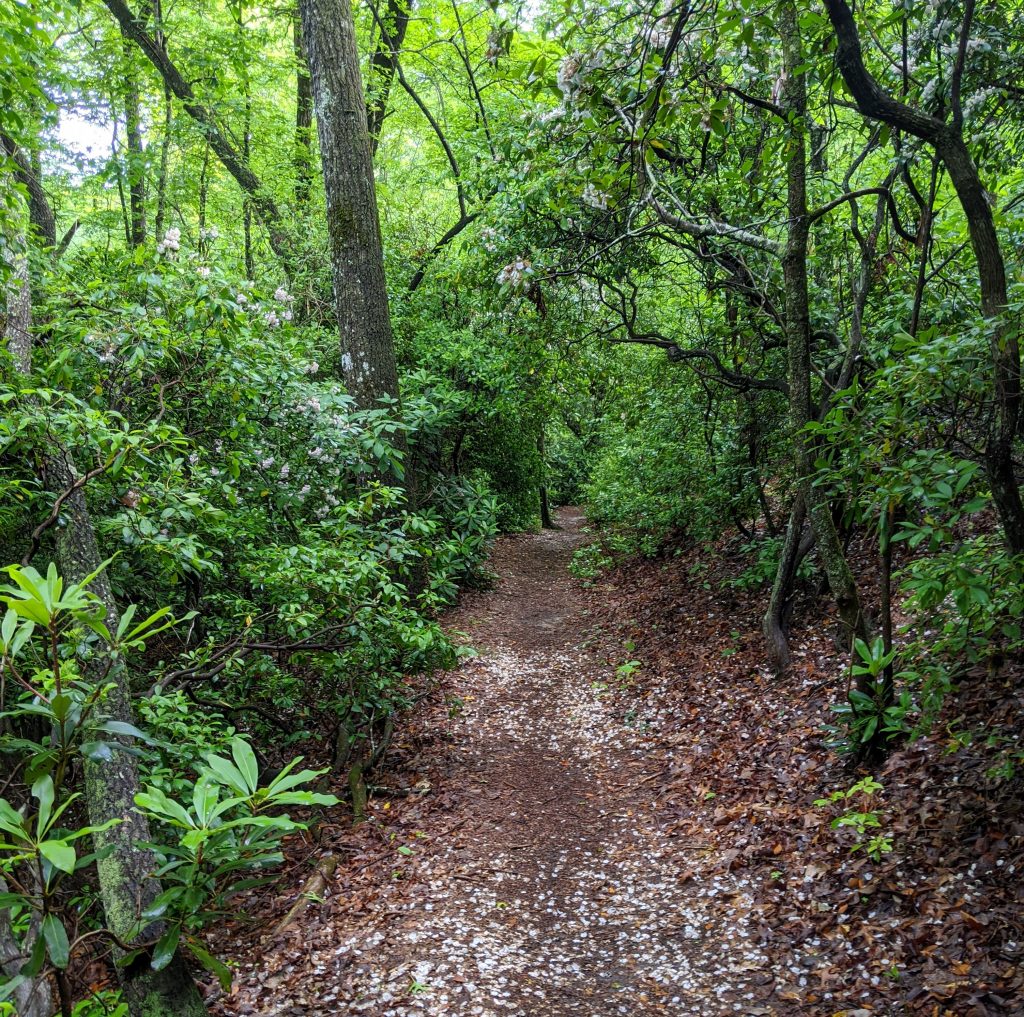 Back to the hike.

We drove a couple hours west of the airport to Walhalla, South Carolina, and stayed in a Rodeway Inn, that actually, was one of the better Rodeways we’ve stayed in. With a couple of hours of daylight left, we scooted over to the trailhead, Yellow Branch Falls.

It was actually hard to find. When we pulled off the main road, our GPS told us we were there, but we couldn’t determine where “where” was. Some pink tape roped off where not to park, but no signage told us where to park and nothing indicated the trailhead. Finally, we saw a small opening into a trail and a tiny USFS sign denoted the trail name. We parked and headed off. It was 6:00 on a Friday night and no one was in sight. 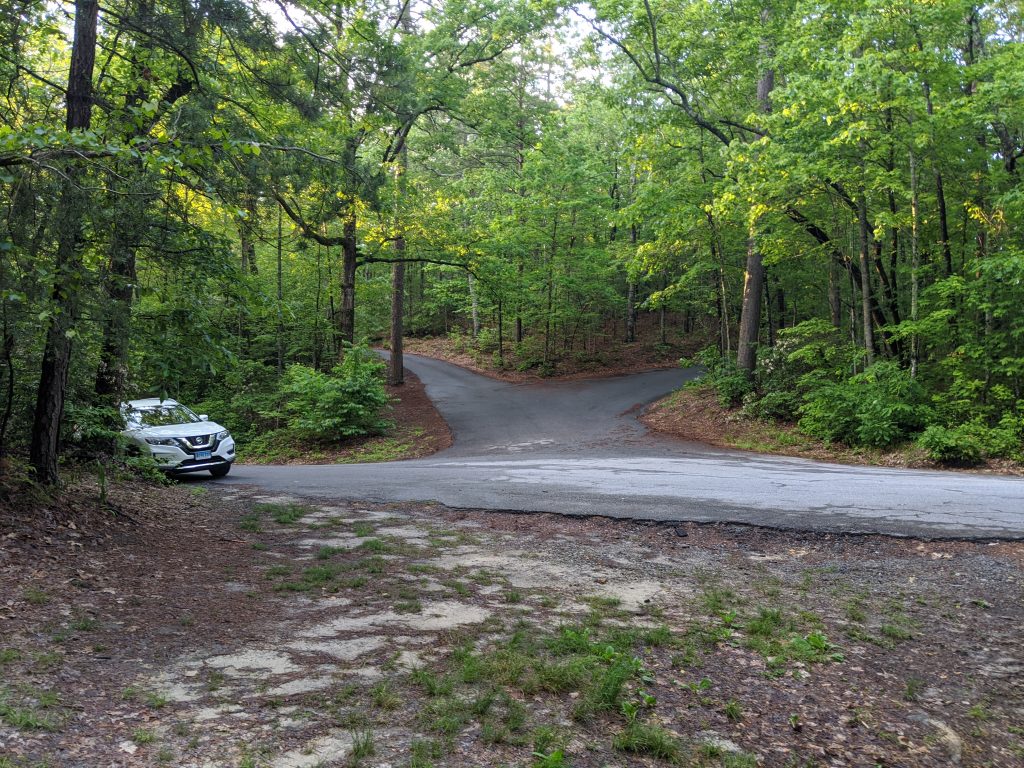 Rhododendrons burst with color and new, fresh, bright green growth popped all over. The duff of leaf litter was damp to muddy, but it wasn’t too bad to hike. As we got further up the trail, though, and closer to several creek crossings, the trail became muddier. I was happy to have on my boots. 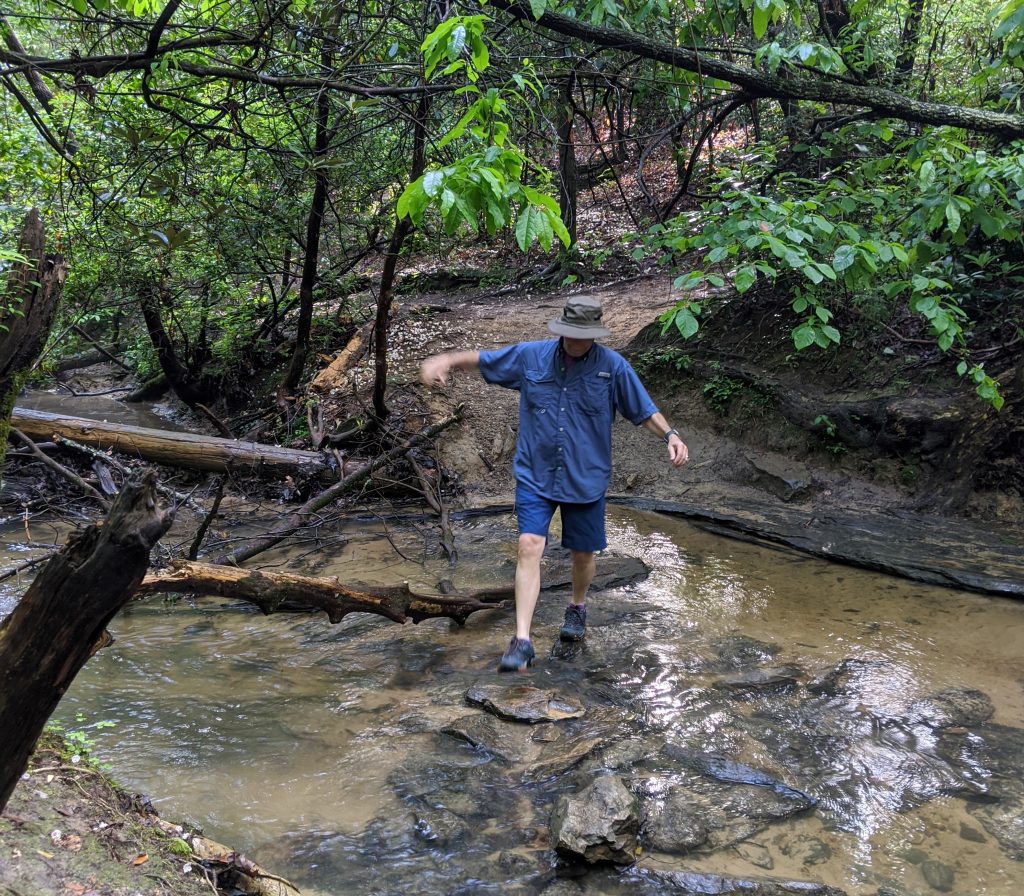 As we were contemplating how much further, we rounded a bend to start the climb up to the anticipated waterfall. And then we heard him.

Standing a switchback above us was a hiker in dilemma. He was sweaty and muddy and looking a bit dazed. We approached.

“It sounded like a train coming through,” he said.

“You probably don’t want to go up there,” he said.

“Five of them. They all fell at once,” he said.

We were a bit confused.

With slight rain starting to fall and both of us feeling a bit weird about the incoming situation, we strapped on our smiles and our how-do-you-dos and approached the man. He was pulling out his big camera with big lens as we approached.

“Let me show ya,” he encouraged us.

As he dropped his camera cap, then his scarf, and his backpack began to roll down hill, he flipped through the images on his Nikon.

He had just been at the falls. While there, a tree avalanche came down, crashing into the falls, and pulling down a mud slide. His before and after shots were shocking. Where once you could stand at the foot of the falls, now trees covered the entire base. Water re-rushed a different path.

He encouraged us to turn around. We asked about his safety–he was fine–but he was going home. We continued on.

A Waterfall Is Always Worth It

The ground was definitely much more water-logged, and we could certainly see how trees could uproot themselves. As we approached the falls cautiously, they smelled of fresh-sawn lumber. The trail was untouched, but the foot crossing at the falls no longer existed. Trees were strewn all over, and the gushing water was certainly looking for new ways to run with gravity.

We took our pictures and skedaddled. With rain starting and soft soil getting softer, we didn’t want to be the next witness to the next tree fall.

Amy’s Burritos Save the Day 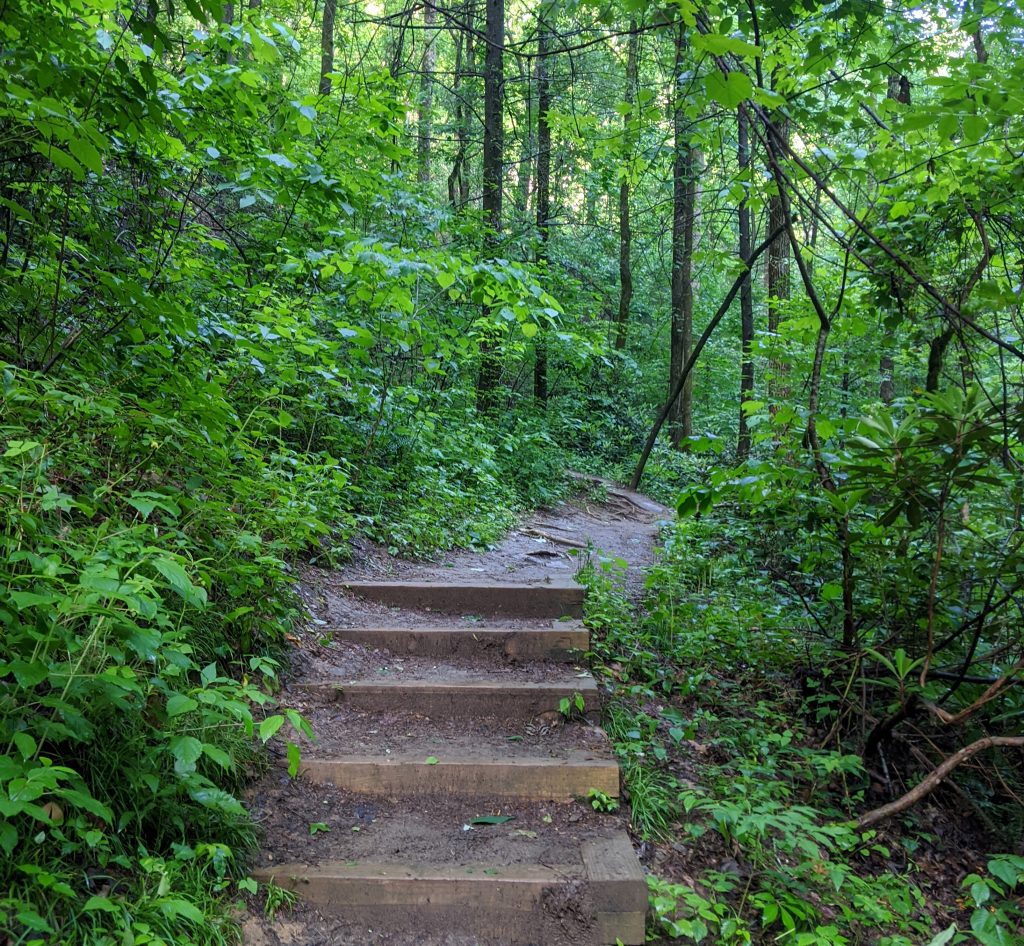 When we got back to the trailhead, we started to wonder where the guy had come from, since there hadn’t been any cars parked with us at the trailhead. We decided to do a bit more exploring and continued down the sidestreet a bit further where we found the official trailhead and information from USFS about hiking in the area. But the info didn’t include anything about Yellow Branch.

A vegetarian dinner in Walhalla was hard to find; we settled with going to the local grocery and buying some frozen Amy burritos and fresh fruit. We nuked them in the hotel microwave, took some showers to get the mud off, and snuggled in for a great night’s sleep. The next day, we journeyed to Tennessee. 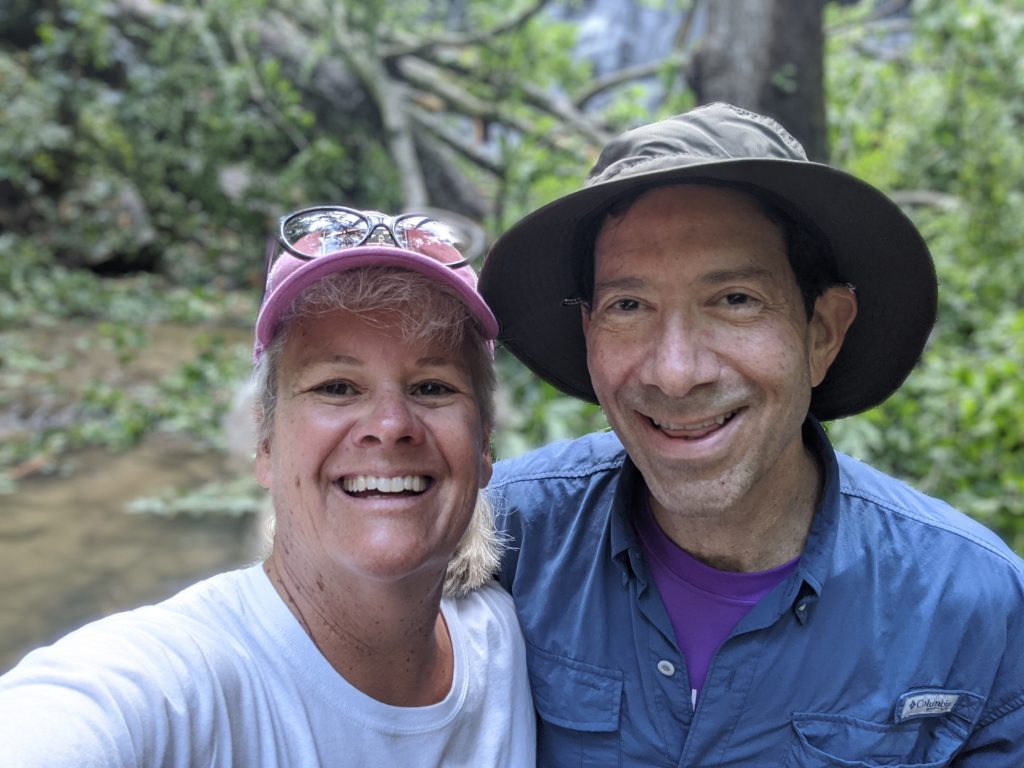 South Carolina’s history and its present-day culture is a discussion for another space.

Be kind to one another. Especially now.

Come along on our next hike through Tennessee.

See you on the trail,