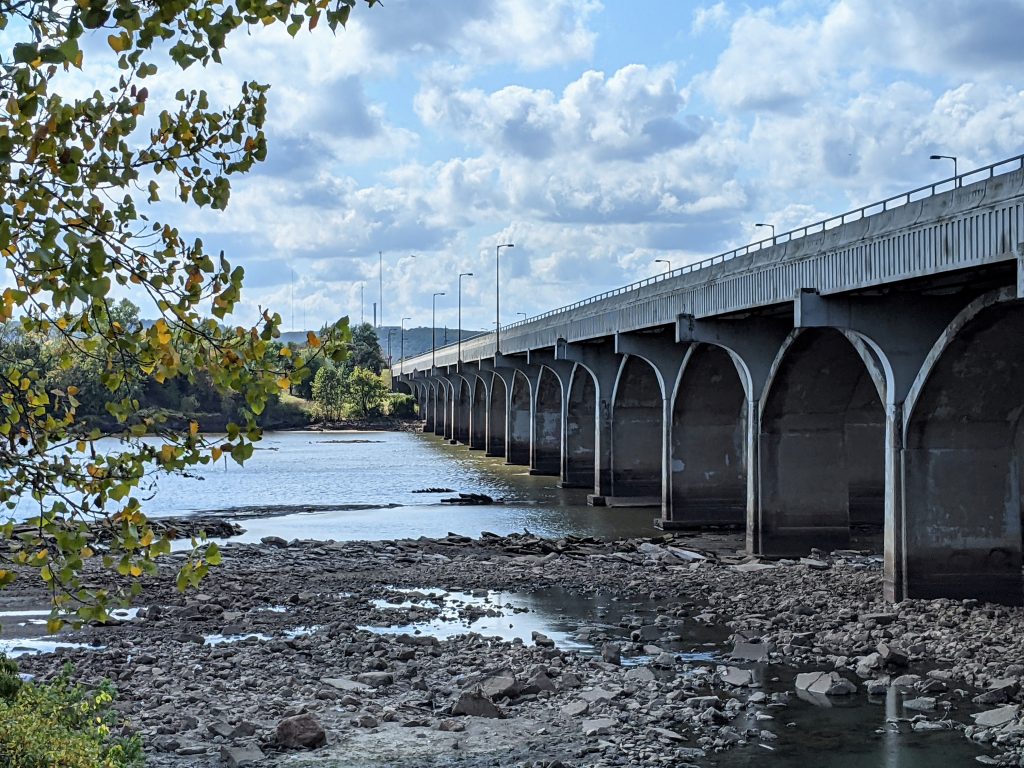 Our trip to the midwest, something I felt would be a bit of a chore, delighted us at every turn. I mean, really, who thinks that hiking in the midwest would be interesting or challenging? To our surprise, as the 50 Hikes 50 States Project rounds the last corner of its adventure, we found three great hikes smack dab in the middle of the country. On this outing, we tackled Oklahoma, Kansas and Iowa. 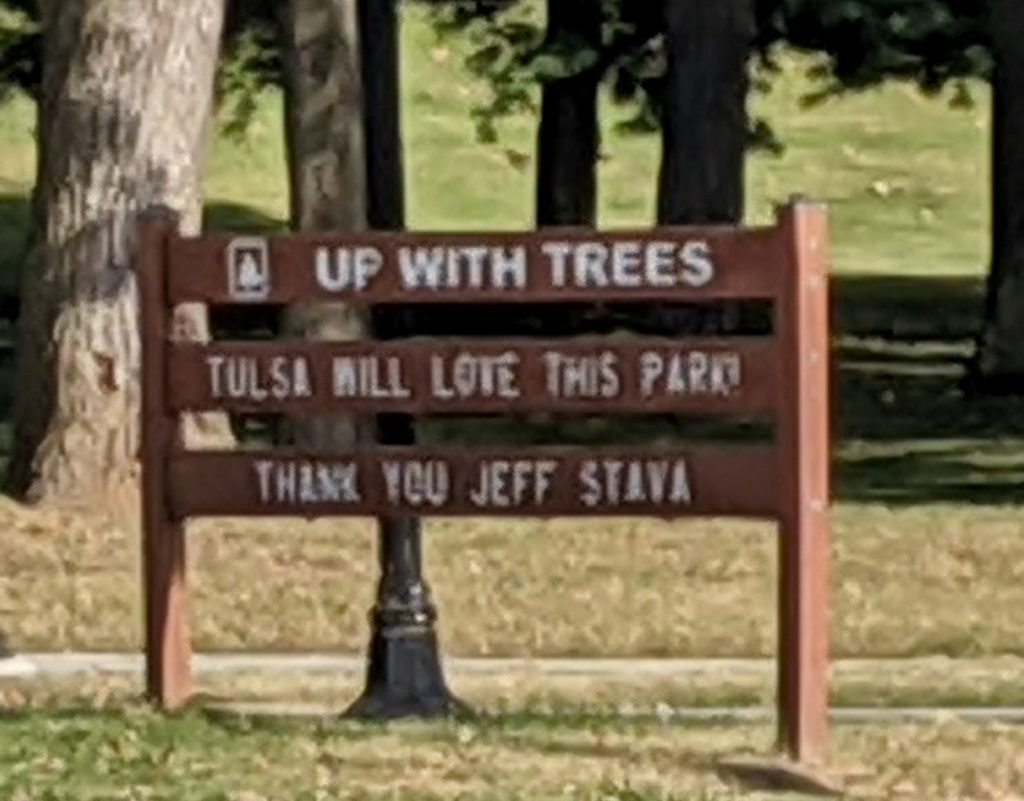 First up, Oklahoma. Landing in Tulsa on a Friday afternoon, I had scoured the area to find an interesting hike. The Turkey Mountain Wilderness Area popped up as a possible location to get in an afternoon hike, and it provided a way to stretch our legs from our flight.

After passing a good dozen Up with Trees signs, which is Tulsa’s signature program to save the trees of Tulsa, and a 20-minute drive from the airport, we dropped in at the Turkey Mountain Wilderness trailhead. After reviewing the trailhead signs, I decided I simply wasn’t interested in a loop through the oaks with mountain bikers squeezing in a late fall ride. The descriptions of the trails didn’t seem to scream quintessential, a requirement of our 50 Hikes 50 States Project; rather it felt rather desperate.

So I pulled out my phone, did some “hikes near me” googling, and settled on a loop along the Riverside Trail in Tulsa. What a great decision! 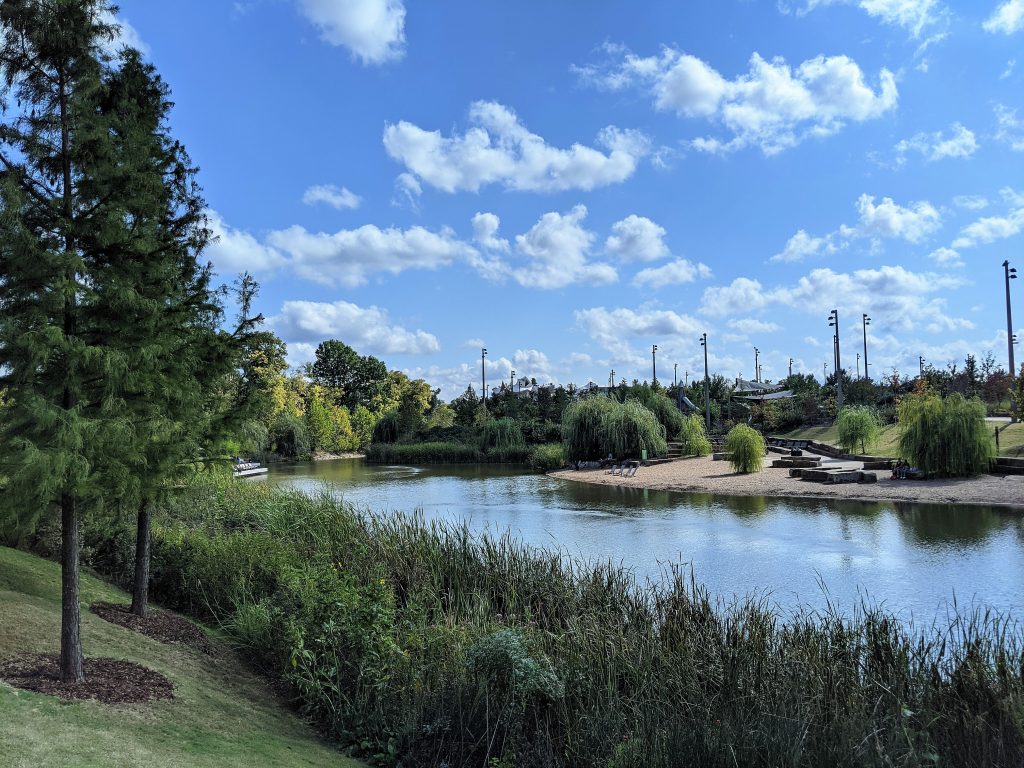 We scurried over to The Gathering Place. This large city park, a creative reimagining of the city’s need to manage the Arkansas’ flood plain, provides meandering paths, fun water features, entertainment stages, and an overall engaging outdoor space for Tulsans. It was also a great place to start our urban hike toward the city along the River Parks Riverside Trail.

Shooting up and down the Arkansas River on both sides of its banks, this urban trail stretches the length of the urban area, connecting downtown Tulsa to its Oklahoma Aquarium for about 11 miles. It’d make a great 20-mile loop on a bike, but we were into a 5-mile urban loop. 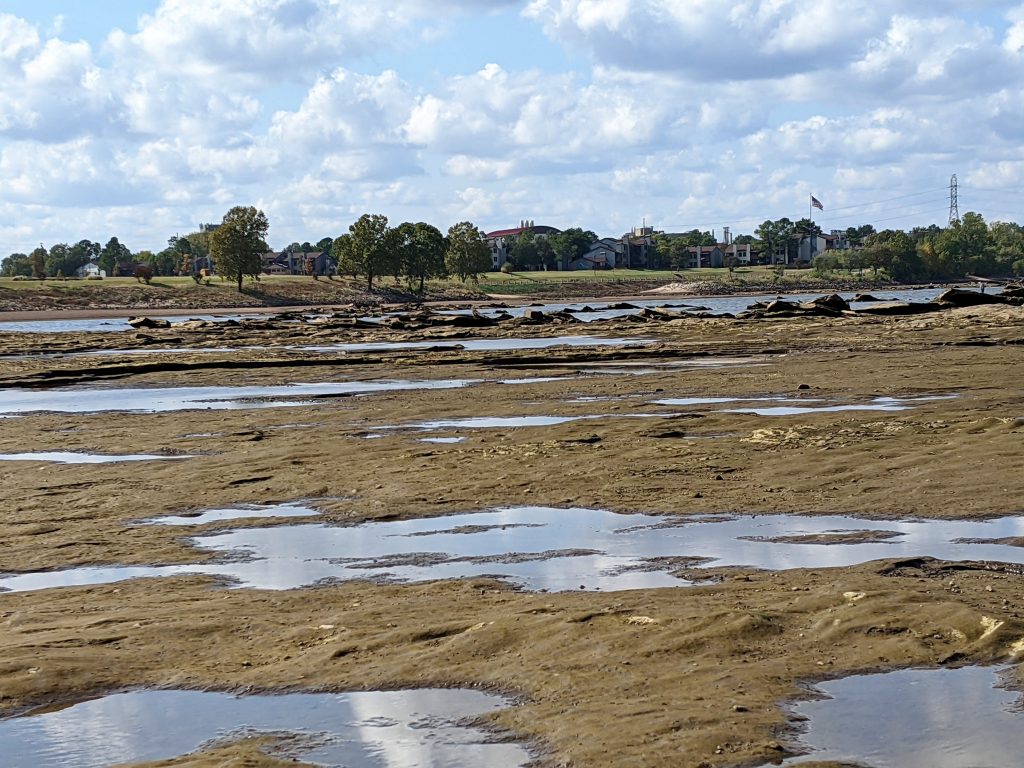 Heading north from the Gathering Place on a well-marked trail that separated the pedestrians from the cyclists, our views of a river at low capacity delighted us. We started along the path, only to be tempted into the river to check out its bottom. Shale exposed itself, providing puddles of adventure to view while gingerly trying to stay upright on muddy and slick rocks. Although I would have loved to have spent hours in the river pools looking for critters, we continued on the path toward the city. 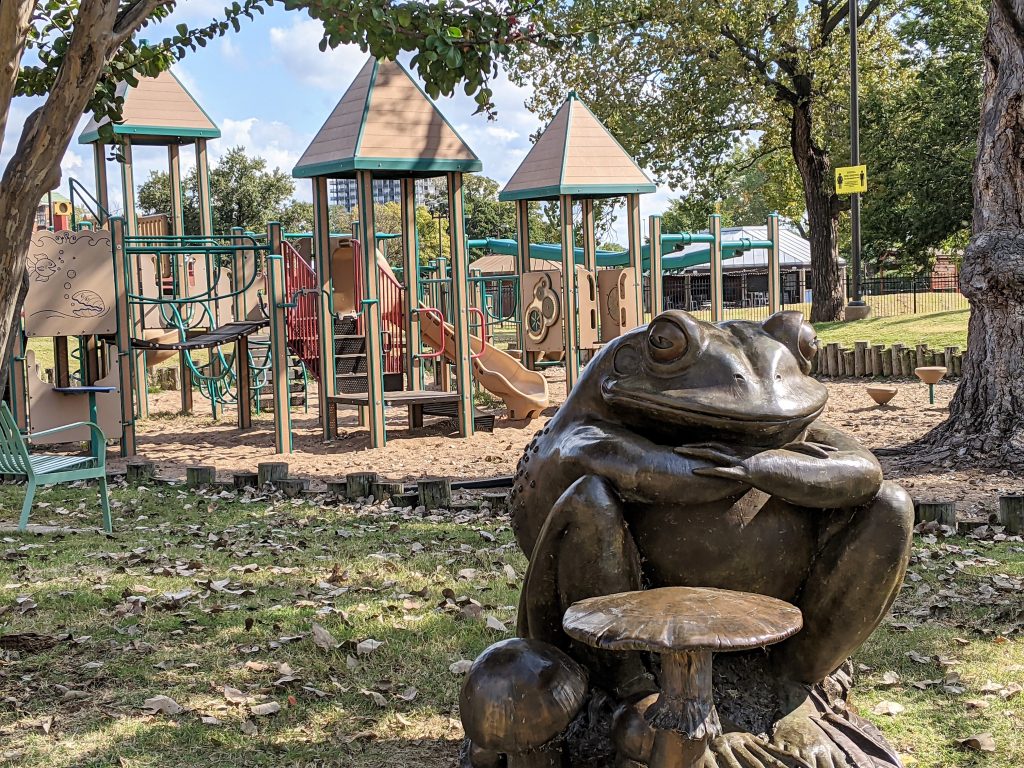 Fall leaves colored the path as play parks with a sculpted frog invited us into play, and a bent oak branch created a tunnel to walk under. We noticed an historic art deco theatre, only to discover it to be the Tulsa Spotlight Theatre. It has the longest running play in US history, called The Drunkard, and we only wished we could have caught the show (watch this video for more info.)

The first two miles of our walk passed quickly. 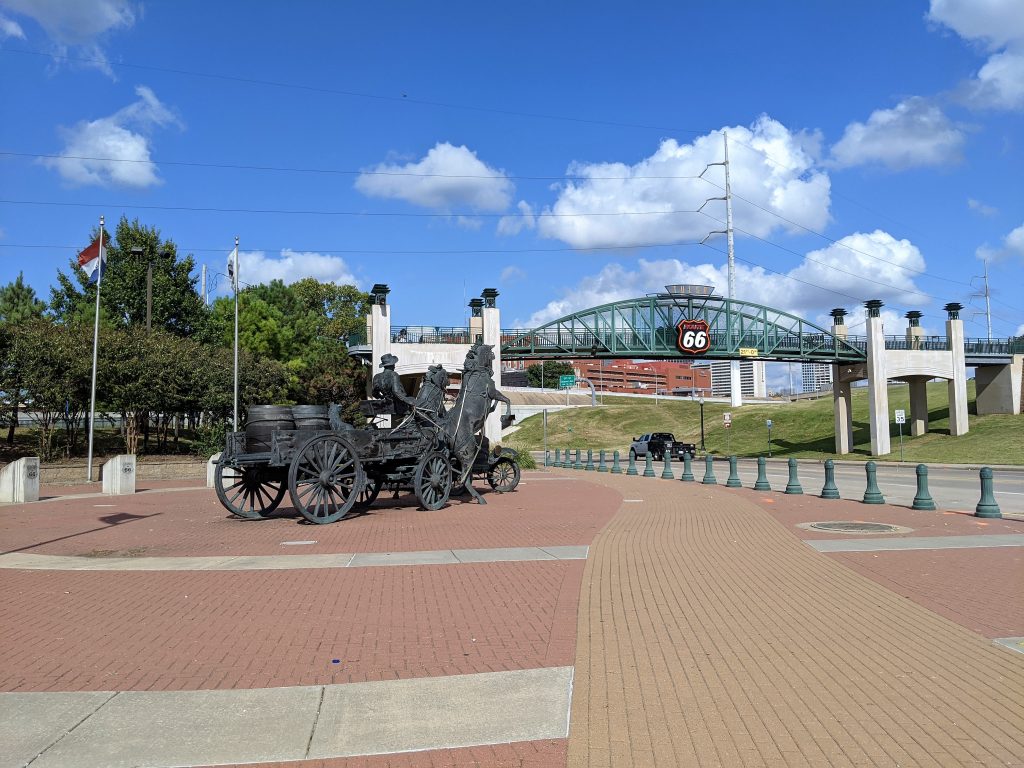 And then we saw it. A large sculpture up to the right of the path. We had to investigate!

Wow! We found ourselves at a gateway to Route 66. A plaza decorated with the state flags of Route 66’s path encircled a large bronze sculpture, called East Meets West, of a wagon and a Model T passing each other in angst. Pedestals of interpretation tell the story of the father of Route 66, Cyrus Avery, and his vision to create a national east-west corridor. We enjoyed this public art piece and a break here before crossing the Cyrus Avery bridge over the Arkansas River to catch the trail south back to our start.

It’s moments like these where we spontaneously learn about our country’s history that I value the most on this 50 Hikes 50 States Project. 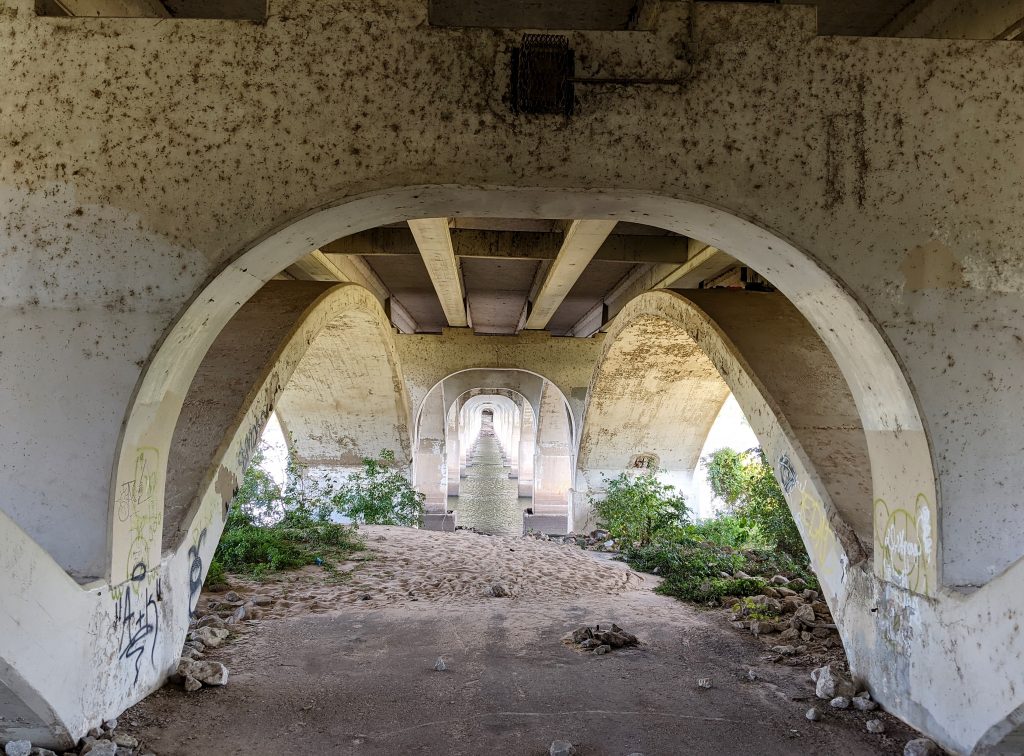 On the western bank, which wasn’t nearly as entertaining as its eastern side, we stumbled upon the River West Festival Park’s outdoor amphitheater where a great blue heron put on a show fishing for its lunch. At W 23rd Street, we crossed the Arkansas again, returning to the eastern bank to continue south to The Gathering Place. 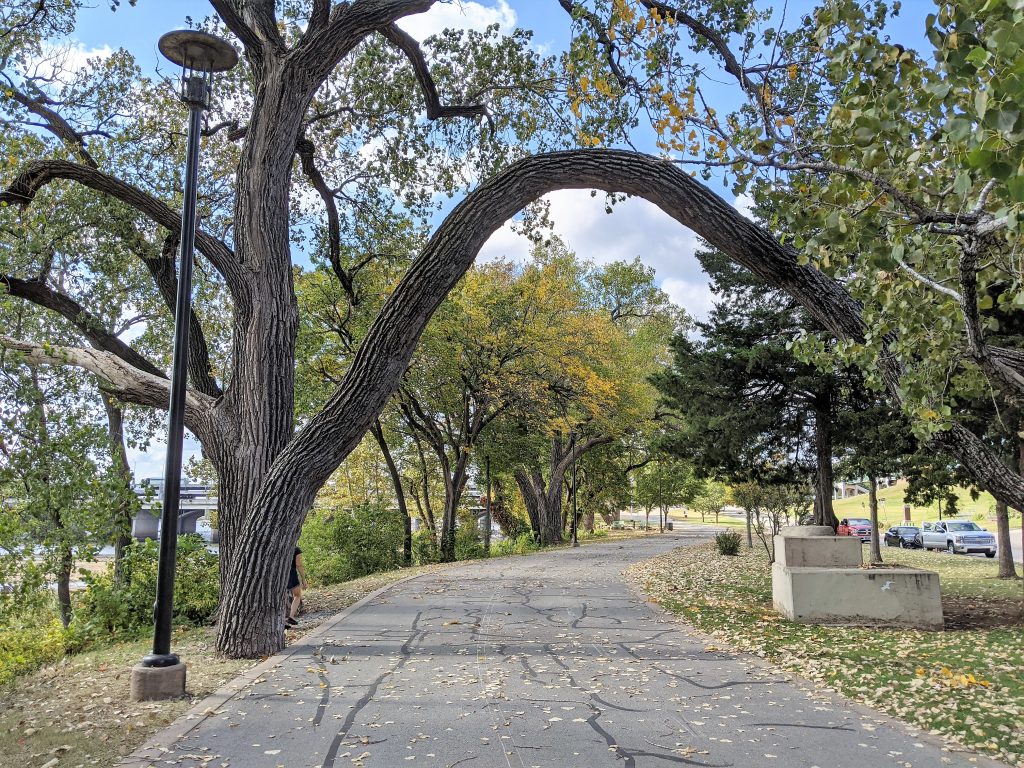 Hungry. We had left Denver earlier in the day, flew, landed, and hiked without anything to eat except some Southwest Airlines plane crackers and a Skout bar. I jokingly asked my husband to find a vegan barbeque place. And he did! Who knew? 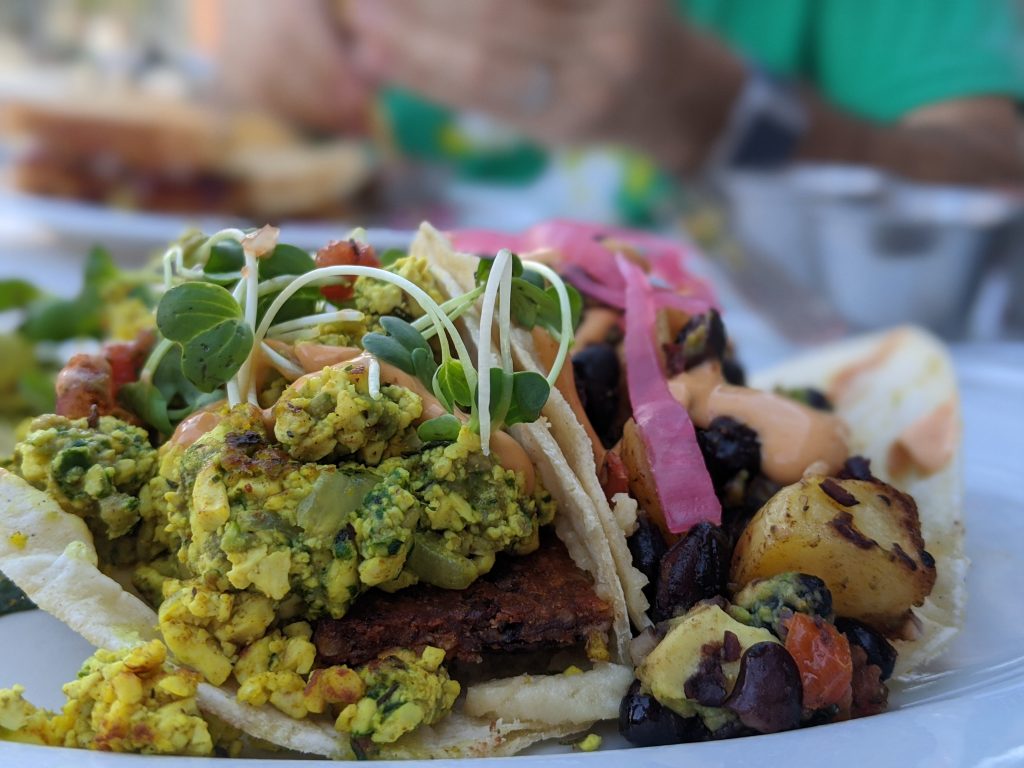 We pointed the car to downtown Tulsa to its arts district, where they had cordoned off the streets to allow for more outside seating. Inside Chimera Cafe, we found an eager staff ready to answer questions about their espresso barbeque sauce. Sadly, I had to pass on the caffeinated jolt of flavor, and I settled for the most amazing vegan tacos I’ve had for a while.

Let me tell you about them. I had four; two of the Dirty Boots and two of the Green Lights. The Dirty Boots dripped with a cashew spread that covered a tasty blend of seared avocado, caramelizad onions, potatoes and black beans. The Green Lights dropped scrambled tofu and adzuki beans (my favs!) with a basil pesto and chipotle crema into my very happy belly. My husband grinned ear to ear while digging into The Camaro, a tofu barbeque sandwich smothered in a rich espresso barbeque sauce dripping with a camayo slaw.

I couldn’t believe we were in Tulsa eating vegan food. And good vegan food at that!

And a Piece of Mile High Pie 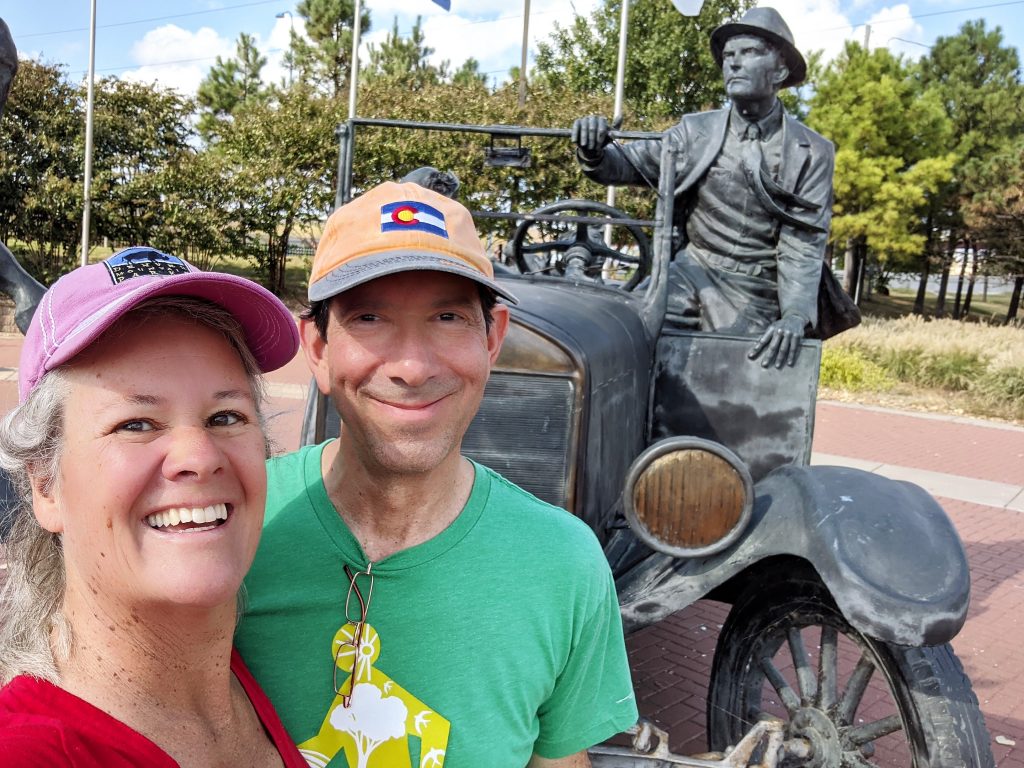 Before we left this darling area of downtown Tulsa, we spotted Antoinette Bakery across the street from Chimera. Not vegan. But ohmy. I told my husband we needed to go in, “just to look.” Well, there’s one type of pie you’ll never see me say no to. I’m a bit of a connoisseur of chocolate cream pies. Whether they’re called cream pies, silk pies, or whipped pies, if I see a chocolate one topped with a pile of whipped cream, I simply can’t say no. And I came out with a slice of Mile High Chocolate Cream Pie. After all, it was Pie Night, and I couldn’t let them down, right?

Filled with vegan food and chocolate pie, we pointed the car north to start our six hour jaunt to Iowa. Next stop, the middle of Kansas where the buffalo roam. Follow along to read about our Kansas hike. 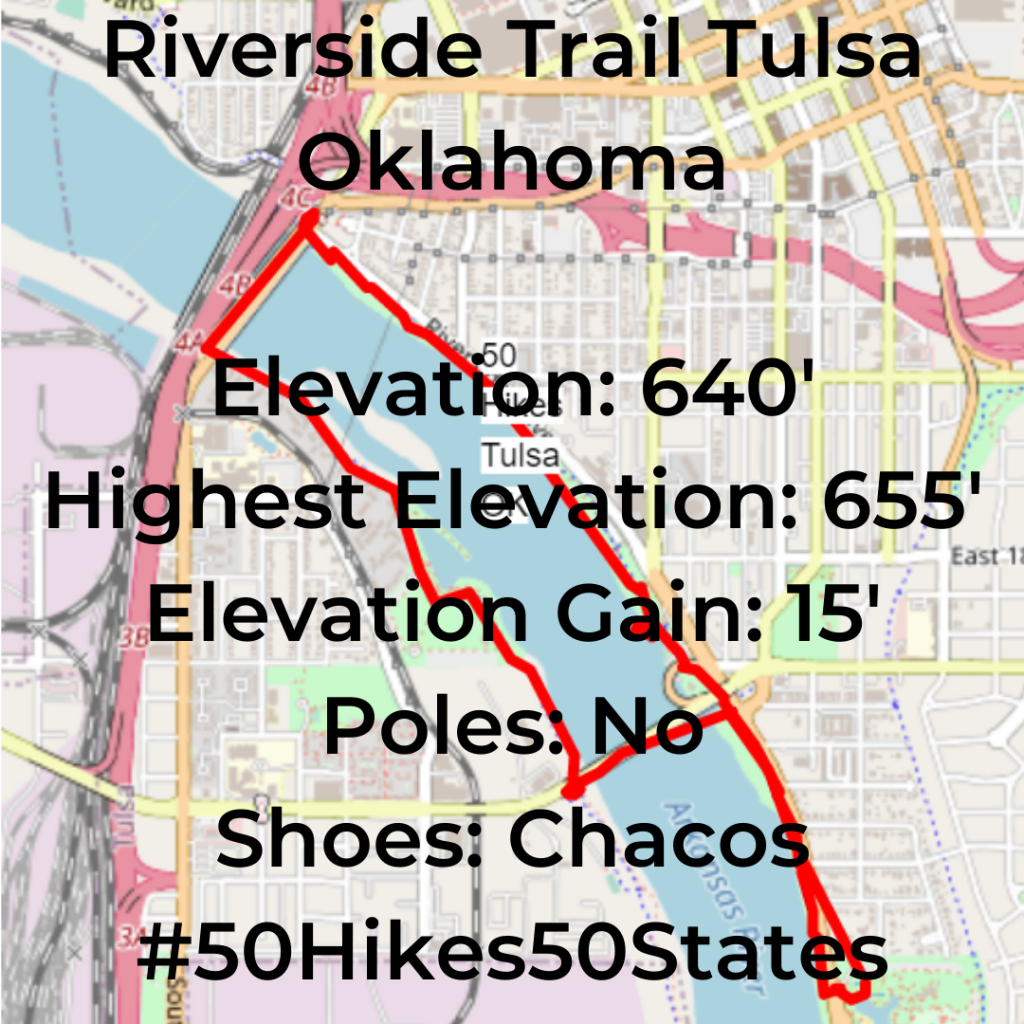