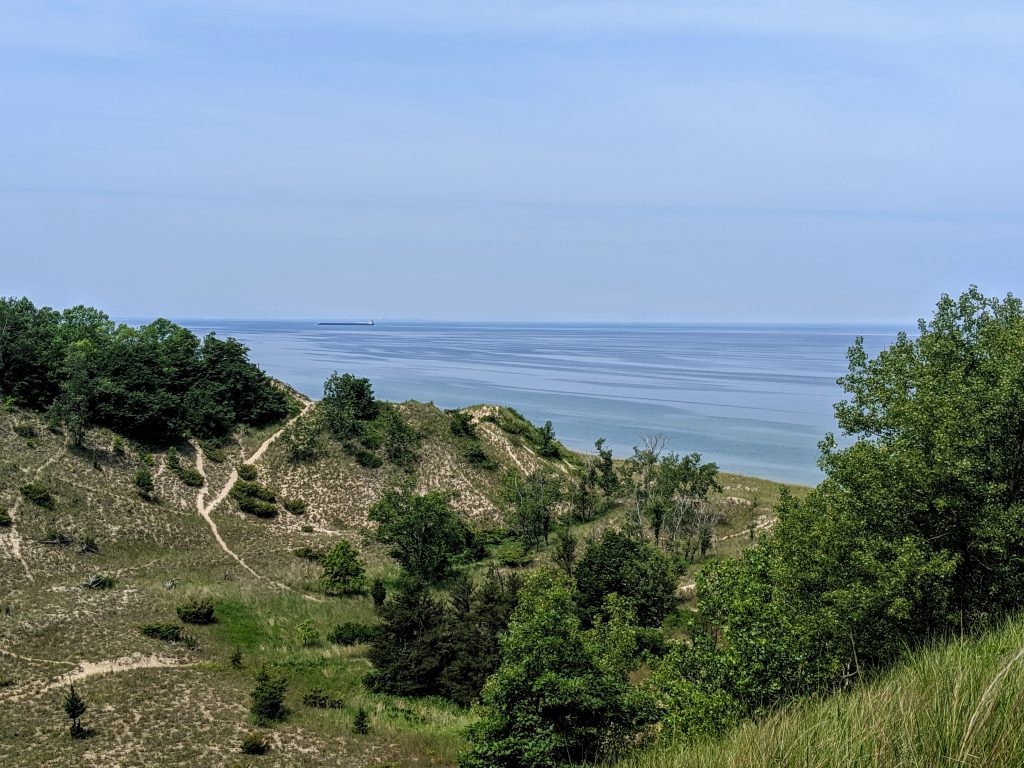 When thinking about Indiana, two thoughts come to mind: the Indianapolis 500, and David Letterman’s jokes about Gary, Indiana. Sand dunes are certainly not on the top of my mind. To my surprise, when hunting for a good hike in Indiana, I stumbled upon the Indiana Sand Dunes National Park.

It’s the newest park in the National Park System.

Thus, after hiking the Midewin National Tallgrass Prairie in Illinois, we headed southeast of Chicago about an hour to America’s newest treasure, Indiana Sand Dunes National Park. We picked a super, 5-mile loop trail through the bogs called the Cowles Bog Trail, named after the University of Chicago scientist who develop the succession dune theory, Henry Cowles.

The Man-eaters Scared Us Off 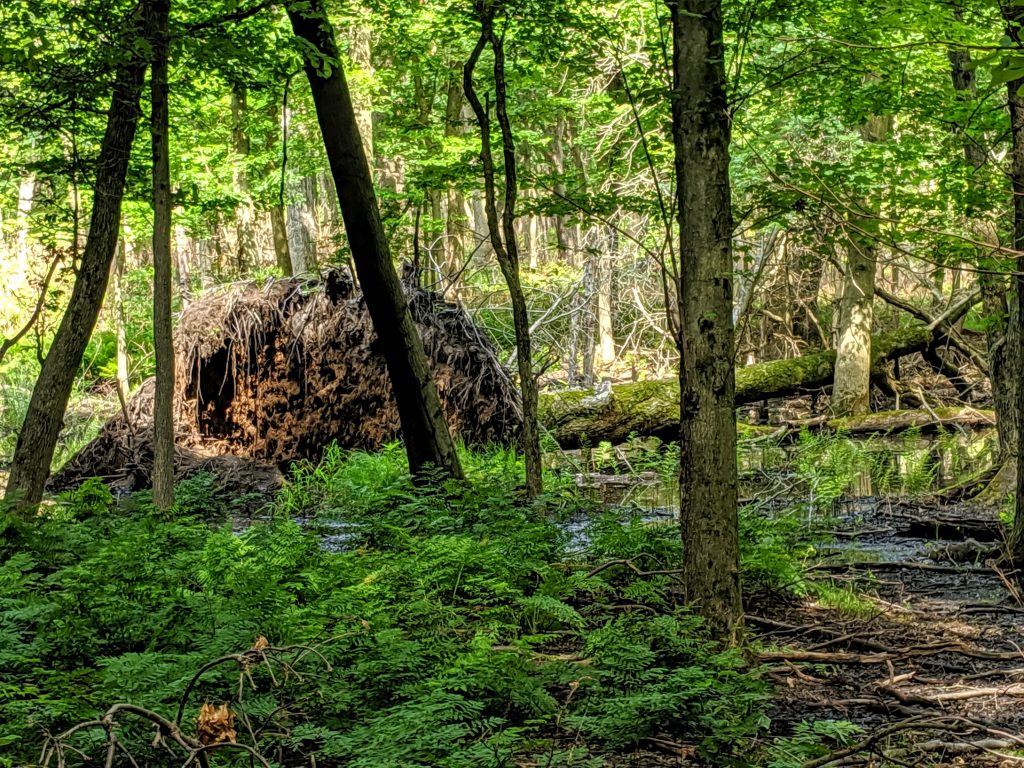 I couldn’t wait to get on the trail. I had thoughts of bog plants, frogs, lilies, shady pines and spatterdock. But after talking to the ranger who mentioned it had been a very wet summer and water was puddling, my thoughts quickly turned to mosquitos, black flies and flying teeth. My teen overheard the ranger’s description, dashing my final thoughts to tolerate being bait to flying man-eaters.

The beach sounded like a great idea, and my thoughts then floated to walking a dune trail and through the dune forests. My teen began squealing about the beach. The beach. The beach! Could she enjoy the beach while we hiked? Thus, we re-engineered our day to visit Indiana Sand Dunes State Park, the “original” dune park of the area. There, we could drop her at a beach, and my husband and I could enjoy a trek through dune succession. A perfect plan propelled us onward.

With my daughter safely sequestered on the sand, we located the Nature Center and trailhead for several trails, including Trails 8, 9, and 10. A 4-mile loop on trails 8 and 9 made sense to us. We made a quick stop at the Nature Center where we learned the whole story to how these open spaces came about.

A State Park, a National Seashore and a National Park Walk into a Bar… 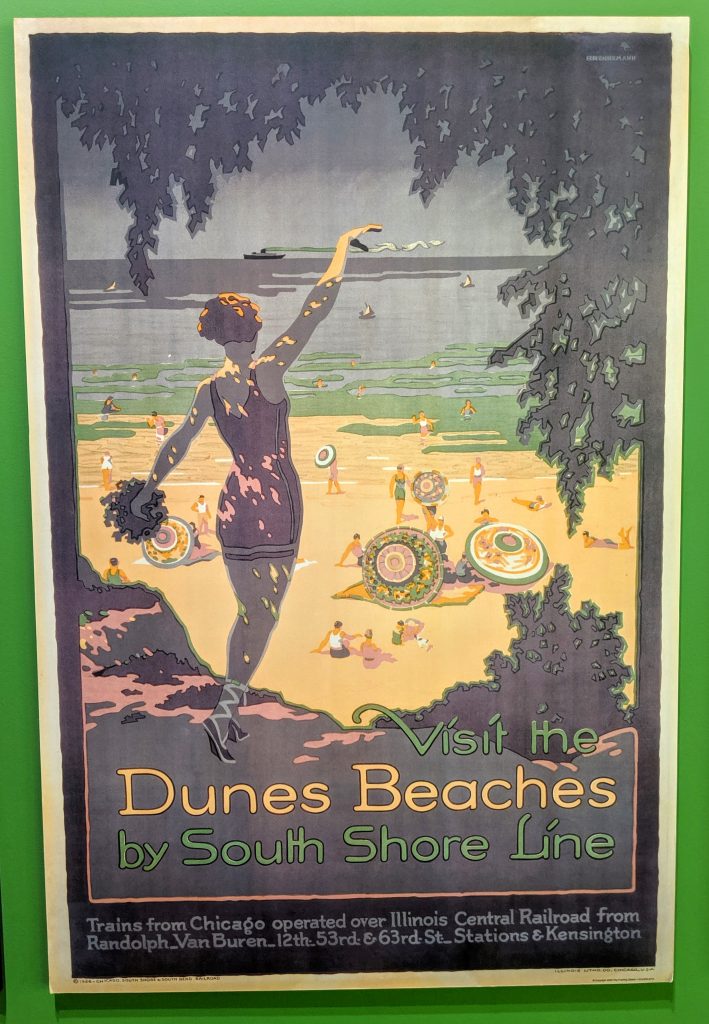 Henry Cowles, also known as the father of botany, loved hiking. Together with his buddies and a fellow by the name of Jens Jensen, they founded the Prairie Club of Chicago. These hiking enthusiasts tried to create the National Park at the turn of the century–but two world wars got in the way. They were given permission to create the State Park, they raised money to purchase land, and with the help of the Civilian Conservation Corp, the trails we have today result from their influence. Yet it wasn’t until the mid 1960s that the ladies of the Save the Dunes Council lobbied John F Kennedy to successfully get the surrounding areas designated as the Indiana Sand Dunes National Lakeshore, which this year became the Indiana Sand Dunes National Park. So regardless of whether you’re in the National Park or the State Park, there’s over 50 miles of trails to explore between the two and miles and miles of beaches to discover. 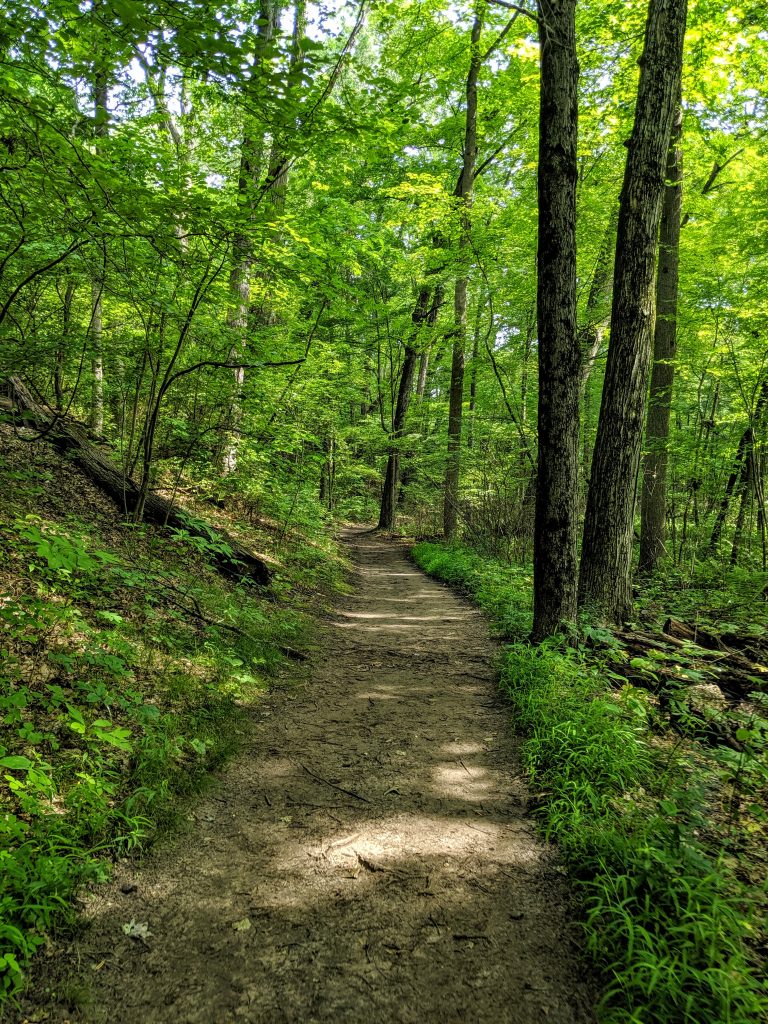 Armed with our history and maps, we set out to find Trails 8 and 9. We started in an oak, hickory and white ash forest on a hard packed trail. It undulated a few small dunes to a small bog filled with fallen trees, lush ferns, and shady secret spots to take a break. The forest cover never exposed the beach. I had expectations we’d feel like we were in sand dunes and be able to hear waves along the shore. Not at all.

The trail never leveled out, but it was never too steep in either direction either within the woods. We’d crest a dune, expecting to see water, only to find more woods and more crests ahead. It was lovely. I expected a fairy to sprinkle dust on us. Our morning start at 9:30 created a trail to ourselves for the first three miles.

Then, a Lake View 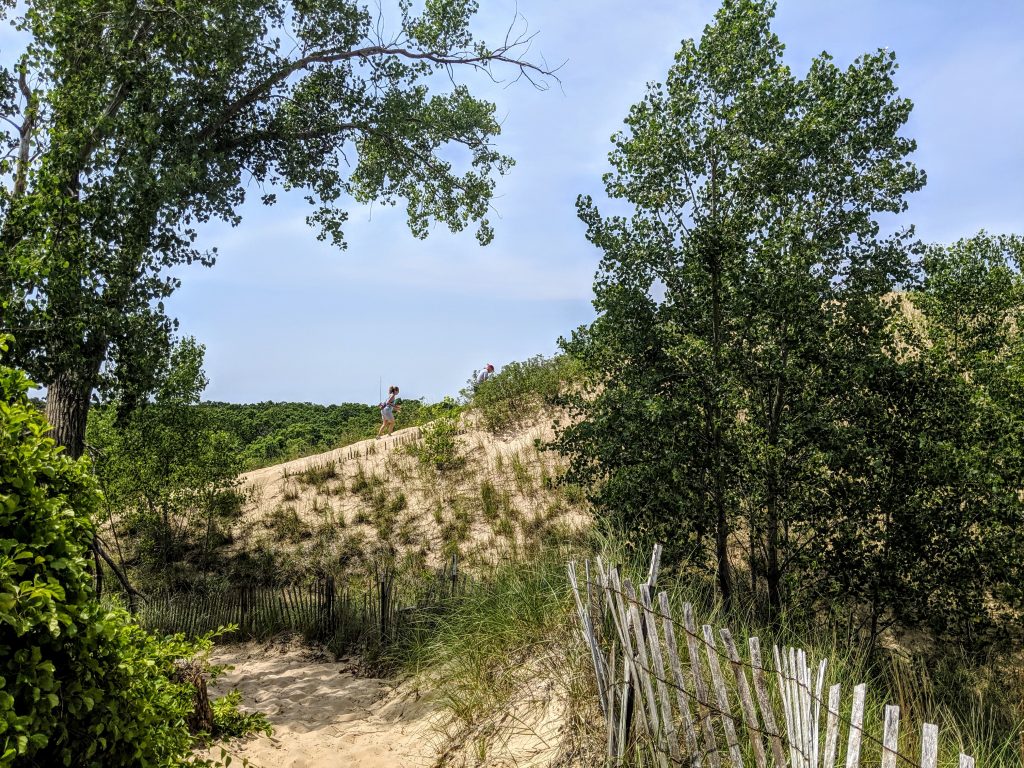 Finally, we rounded a dune and the Lake Michigan coast line sparkled ahead. With the port just off to the west, our first glimpse of Indiana’s role in world trade bobbed just off shore in a giant cargo ship. Jet skis darted between it and the shoreline, making for a lively scene of water adventure. Red maple and yellow birch gave way to marram grass and pin oaks.

We had arrived to the top of the primary dune line at the highest elevation of our walk. The hard-pack dirt tail gave way to sand. Lots of it. The soft sand trail lead us down the side of the dune through the grass to a blowout–a natural phenomenon made by the blowing and swirling winds–and up its western side. 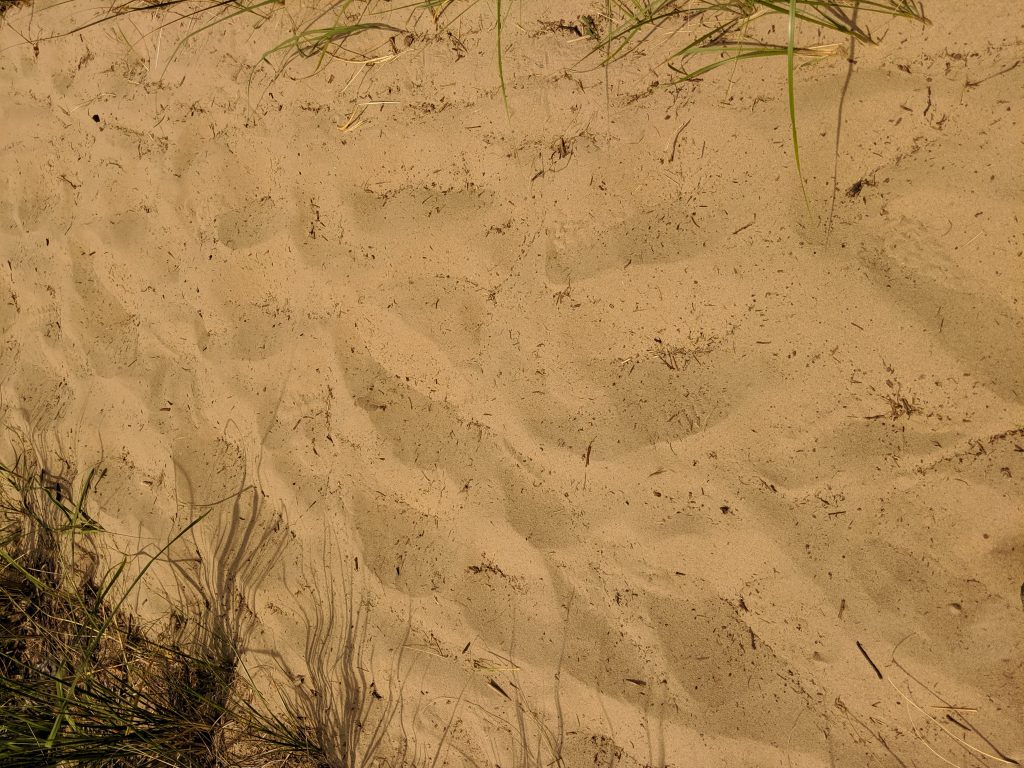 Don’t let the sand dune fool you. It was a steep, hard climb through soft sand in blazing sun.

Thankfully, the climb up was short. From there, the hike continued along the dunes and in the sand for another half mile, leading us back through the hardwood forest from which we had come. The last half mile of the walk along Trail 9 took us back to hard surface and the Nature Center.

We had a delightful time. I don’t imagine there are many other places in the US to walk a giant sand dune along a water body. We might discover something similar at Sleeping Bear Dunes National Park in Michigan. We’ll see. In the meantime, I was overjoyed I had worn my boots. My husband had worn his Keen sandals and was quite uncomfortable from the both the heat of the sand and the amount of it. He was constantly emptying his shoes while I was able to wait until the end of the trail for one quick sand dump.

Lunchtime (Is Not In Gary, Indiana) 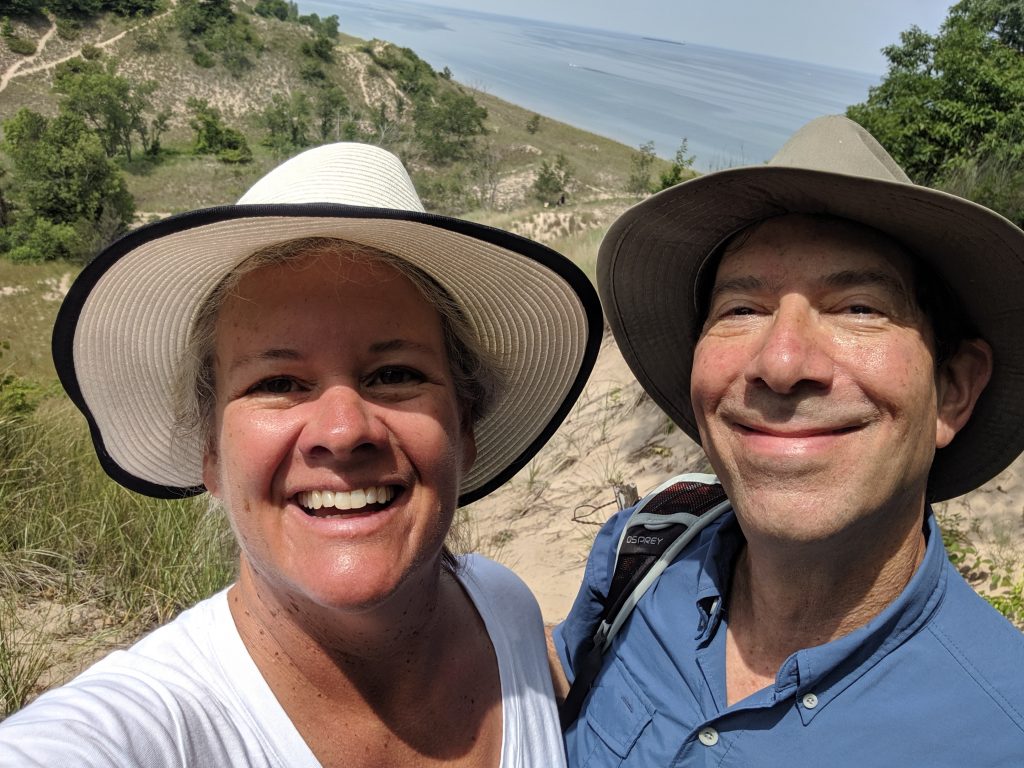 We hiked about 4 1/4 miles, got back to the car, then scooped up our daughter at the beach. Everyone was happy–but hungry–so we Yelped our way to Gary, Indiana, in search of food.

Don’t bother with Gary. Egads. Now I get Letterman’s jokes.

Just to the west of Gary is a small town named Hammond. There we found fresh rainbow trout, mashed potatoes and gravy with a yummy roll at the Hessville Family Restaurant. Be sure to stop in. 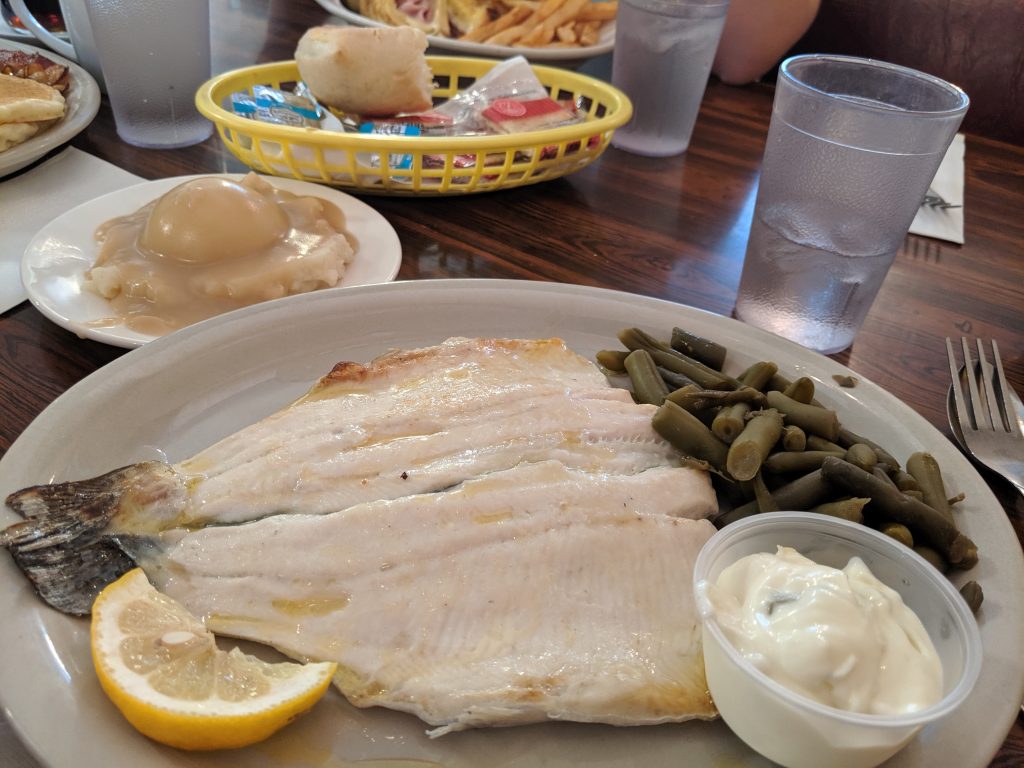 Thus, that completes our successful trip to Chicago. We flew on Southwest into Midway from Denver and were able to check off both Illinois and Indiana within an hour each way from the airport. Next stop, Boston, where Southwest will carry us on a companion pass to Rhode Island, Massachusetts, and Connecticut. 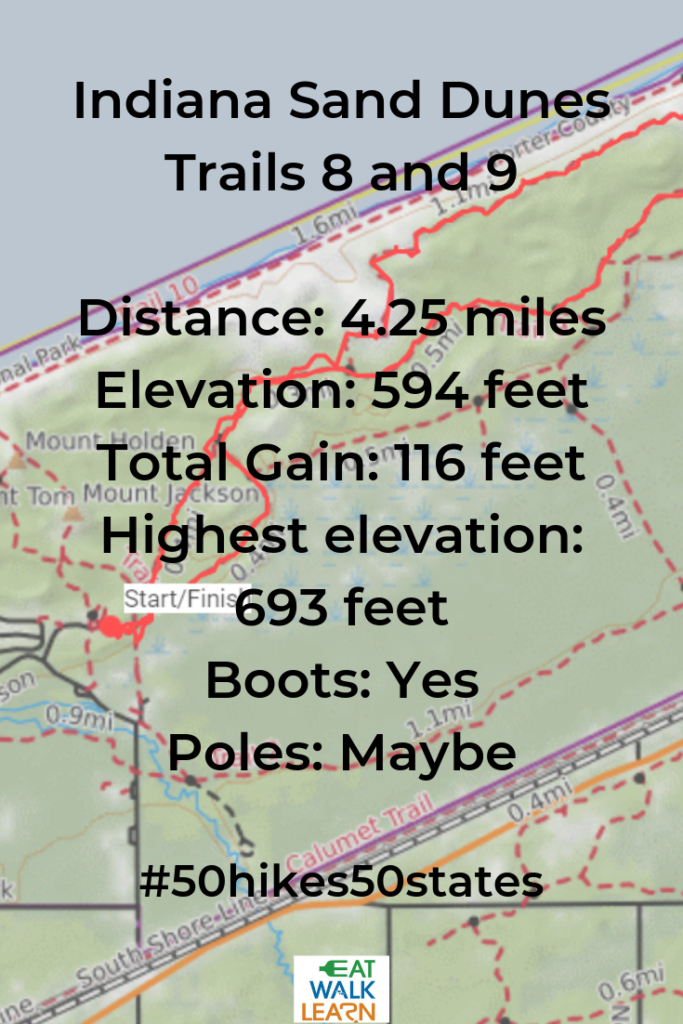