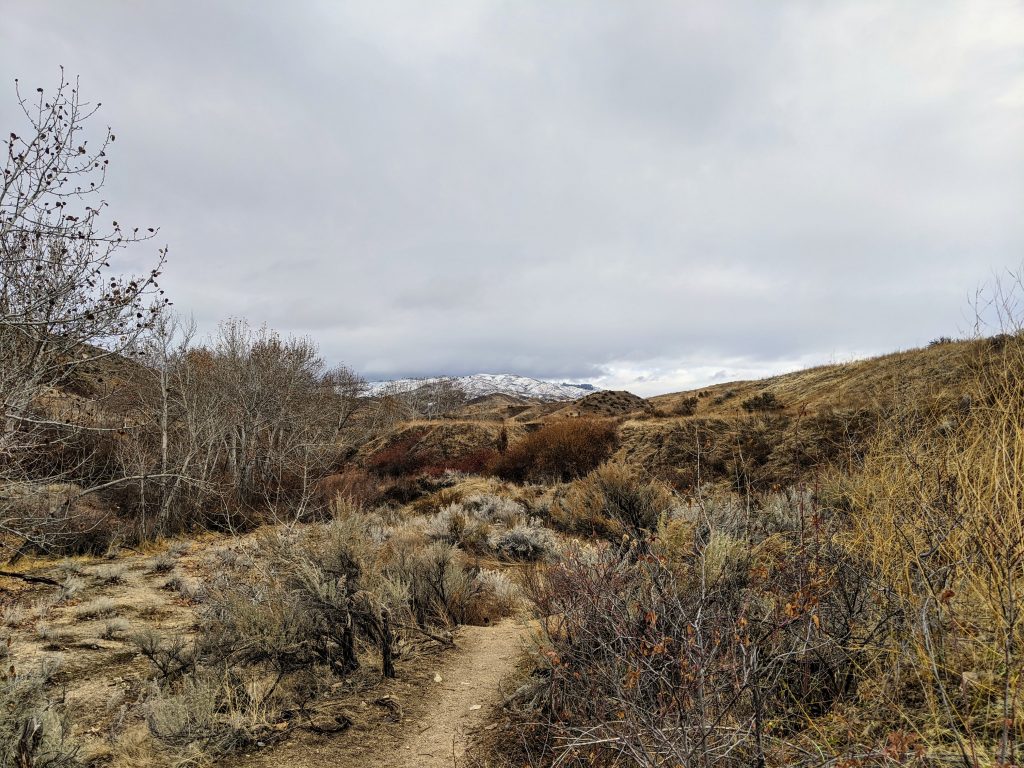 Idaho, with its odd shape and odd location, presented a challenge for us. It sits just a titch too far to drive from Denver, and it’s too far away from the hikes we wanted to do in Oregon and Washington to be combined on a western trip. So we decided to jump a quick flight to Boise to knock out Idaho.

What a nice change of pace to only have to do one hike in a weekend. Whereas most of our trips include one airport and three states with three hikes and lots of driving, a pleasant surprise of a low-key, low-movement weekend hit the spot. In addition, many of the hotels where we have stayed throughout the US were low-budget, out-of-the-way, yet close to the trailhead, hotels that weren’t very special. For once, we could stay in a well-appointed hotel in the middle of town, not rent a car, and enjoy a transit-free weekend. 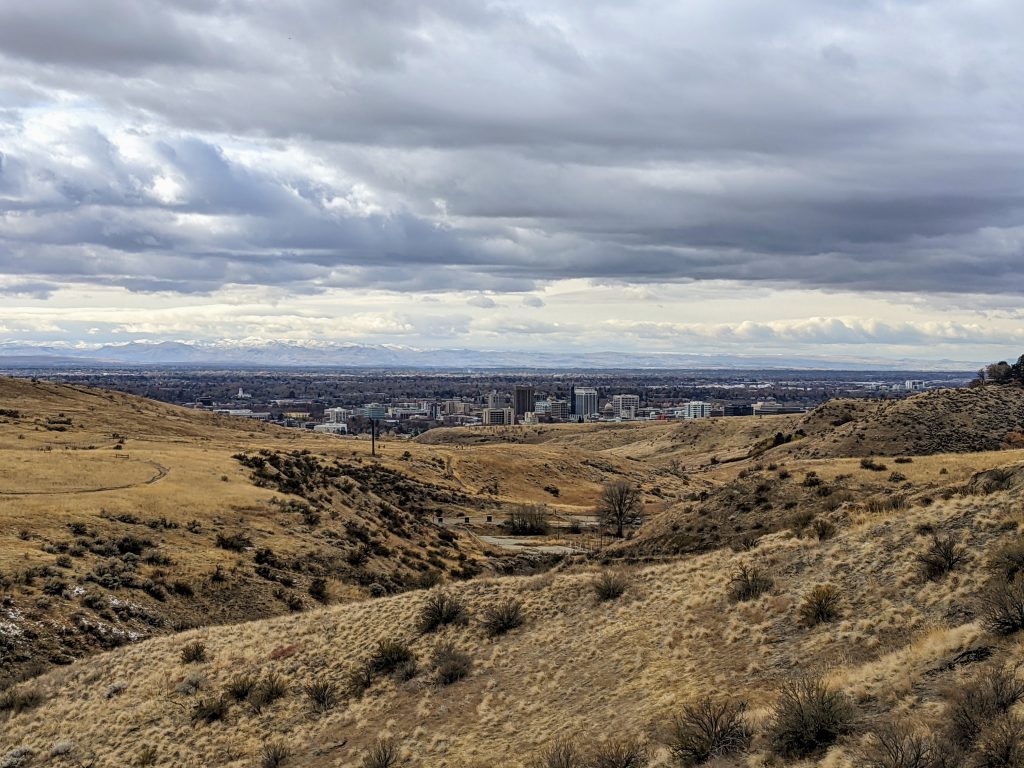 Our flight arrived to Boise in the mid-morning. We jumped in the hotel shuttle from the Boise airport to The Grove. From there, a quick Uber hail put us on the trail, just 3 miles from the hotel. In the vein of finding a hike that hit our criteria (3-5 mile loop, moderately difficult, and quintessentially unique to the state), we found ourselves at the Military Reserve on the outskirts of Boise.

At the Reserve, you can pick from a over 12 trails that loop through the reserve, reaching high points and low points throughout this historic 734 acres. Once home to Fort Boise where the military troops practiced maneuvers from the1860s to the 1940s, the open space howls with coyote, bears, and birds of prey.

We started our hike at the Cottonwood Creek Trailhead, hiking on the north side of the Reserve to its highpoint above 3200 feet along the Freestone Trail to Three Bears. I loved the open sagebrush flats that bordered the creek along the trail as we climbed out of the gulch into open space. Bogus Basin’s snow topped mountains provided a northern compass on our hike as we moved to the east and then down the mountain back to the trailhead.

At the beginning of the hike, we passed the Fort Boise Military Reserve Cemetery. Although the cemetery is now closed, over 250 soldiers from the 1900s up to World War II are buried there. 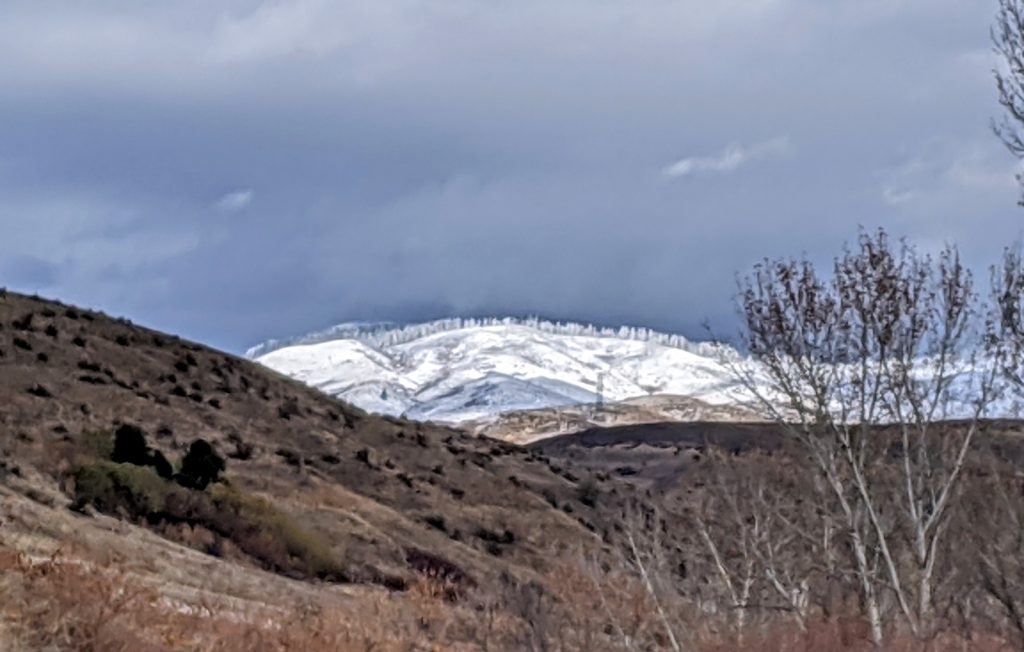 Fresh coyote scat dotted the trail, prompting me to howl to our canine friends. The howling, apparently was effective, because we came around a turn and witnessed a healthy and large coyote scampering by. She fit right in. 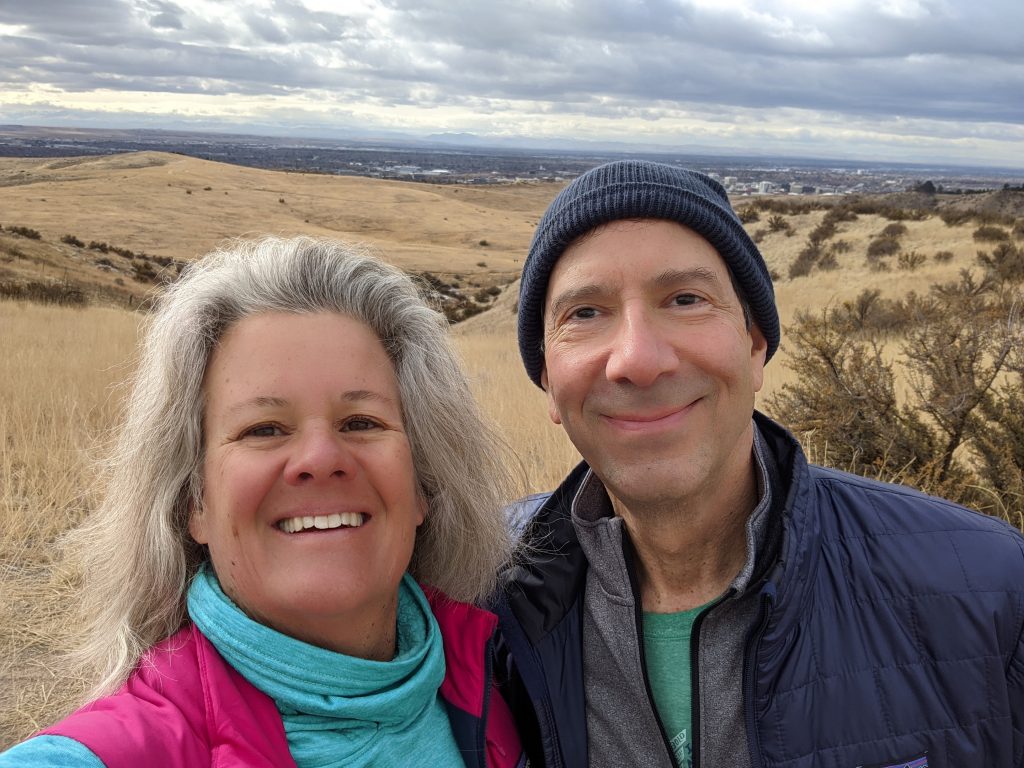 As my husband and I were hiking, we reflected on the things we know about Idaho. Wikipedia always throws us a few facts, but the one thing that stuck in our brains is how Idaho is known for potatoes. It’s the largest grower of potatoes in the US. Which got us thinking, what’s our favorite way to eat potatoes?

Hiking on a trail, you’ve got time. Lots of time. So we began to “Forrest Gump” potatoes, following Bubba’s example of how many ways you can eat shrimp. Except, we made a potato list.

I found out my husband’s favorite way to eat potatoes: French fried. Me? Red potatoes with butter and rosemary.

We killed a good three miles talking about potatoes. By the time we got back to the trailhead, after over 5 miles of meandering through the foothills, we craved potatoes!

I’ll Take the Purple Ones

Boise didn’t disappoint. We hailed another Uber, and soon found ourselves at Boise Fry Company. It’s a place where you order at the counter and they bring you your treats a few minutes later. Fast fresh. An eager cashier greeted us.

And the questions started. On their menu board, which changes daily, they post potato types, preparation modes, and sizes. You’re supposed to pick the potato you want. On this day, our choices were russet, gold, red, purple, yam and sweet. Then you picked the way you wanted the potatoes prepared, according to the daily offerings. Choices were homestyle, regular,  curly and po’ balls. After many questions, I finally just asked our friendly cashier for her favorite. She said she loved the purple po’ balls. One of those please! My husband? He went for the gold curly.

To add to our potato choices, we ordered the vegan burger, too. Made from black beans and quinoa, I was so excited we didn’t have to settle for an “impossible” burger option. With a variety of ways to get the vegan burger topped, I actually jumped into the vegetarian world and ordered it with cole slaw, blue cheese, and handmade potato chips stacked on top.

More than One Way to Ketchup

We waited for our order safely cornered on high-top stools and watched other folks get their versions of their favorite potatoes. Soon, we realized that everyone had a different sauce to dip their spuds. I returned to the counter to find out we could get all nine flavors to try! Out came honey mustard, blueberry ketchup, sour cream, ketchup, cinnamon, barbeque….dip, dip, dip. Each improved on the other.

Finally, our lunch arrived. It had been a long day up to this point that included an early rise to get to the airport, a two-hour flight, a five-mile hike, and two Uber rides. We were ravenous.

My purple po’ balls spilled out of their silver bowl next to a towering vegan burger trying to stay upright. I popped a po’ ball into my mouth. It’s crunchy outside gave way to a melt-in-your mouth, mashed potato bite that was somewhat nutty yet also buttery at the same time. Each po’ ball dipped into its own sauce. My favorite? The blueberry ketchup!

After a little nap in our swanky room, we ventured out into Boise’s offerings. A Trump rally circled the capitol. We bypassed it to enjoy Boise’s ode to public art, their Freaky Alley. Not long, but cute on kitsch, this artsy treat delighted us. It was right around the corner from the vegan restaurant, High Note Cafe, but we were too full from our potato extravaganza to indulge again. 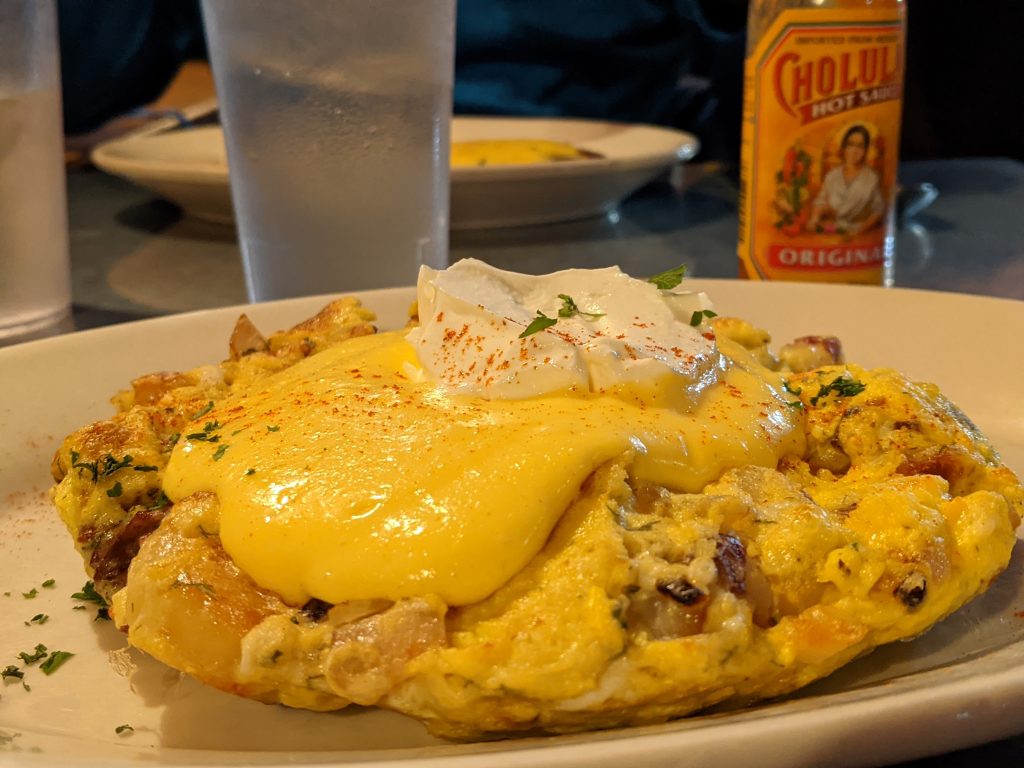 Sunday morning found us strolling Hyde Park and a Trump-free downtown. We grabbed breakfast at one of “America’s Top Ten Breakfast” places, only to be a bit disappointed. I think people who love breakfast meats like links, sausages, bacons, and patties would find Goldy’s Breakfast Bistro spot on. Instead, I settled for a potato and dill frittata, which as was good, but certainly not what I would put in a top ten in the U.S.

A quick flight home took us back to Denver where we plotted our next trip. We only have WA, OR, CA, HI, and AK left of our 50 Hikes 50 States Project. COVID is closing in…where will we be able to escape to next? Stay tuned.