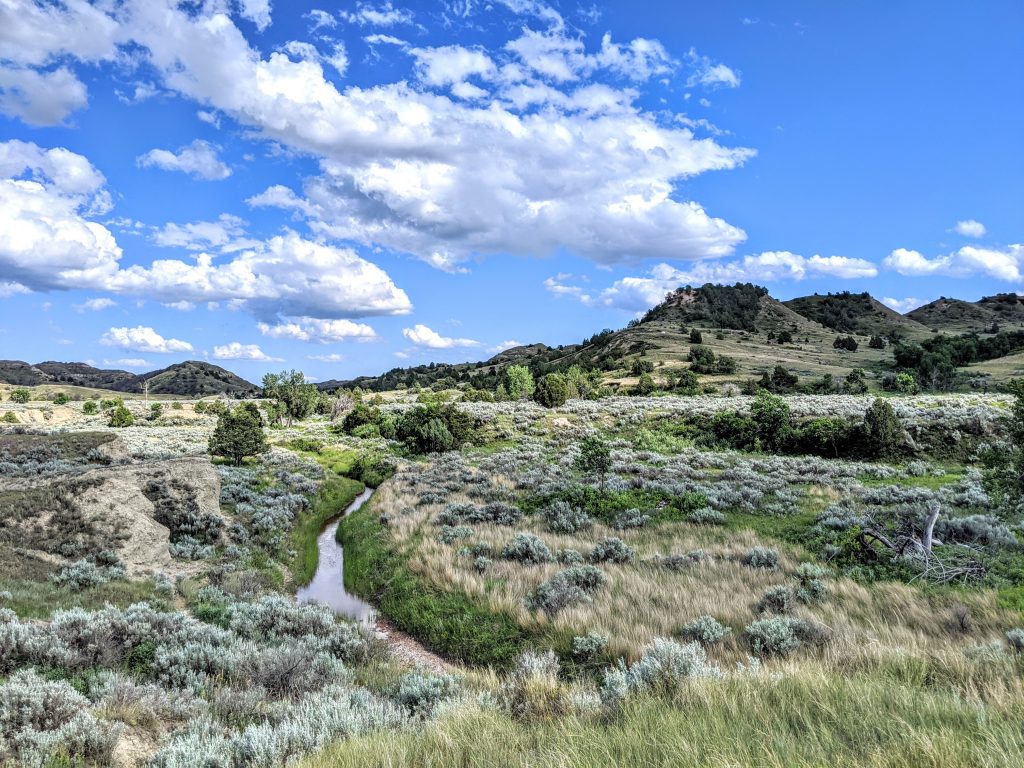 Everything I knew about North Dakota before getting to North Dakota came through memes from the movie, Fargo. I have never even watched the movie, much less been to Fargo.

Oh, and there’s an oil boom.

That’s about it. So I was expecting North Dakota to be a weird-looking outlier to the American experience, hemmed in by the famous conservationist, and also US President, Teddy Roosevelt.

Need a good pair of boots? Get some Keens.

Thus, we pointed the Tesla toward North Dakota on our 50 Hikes 50 States Project after a romping good time hiking the Badlands of South Dakota. What do we meet at our first stop?

Solar Powered and Raring to Go 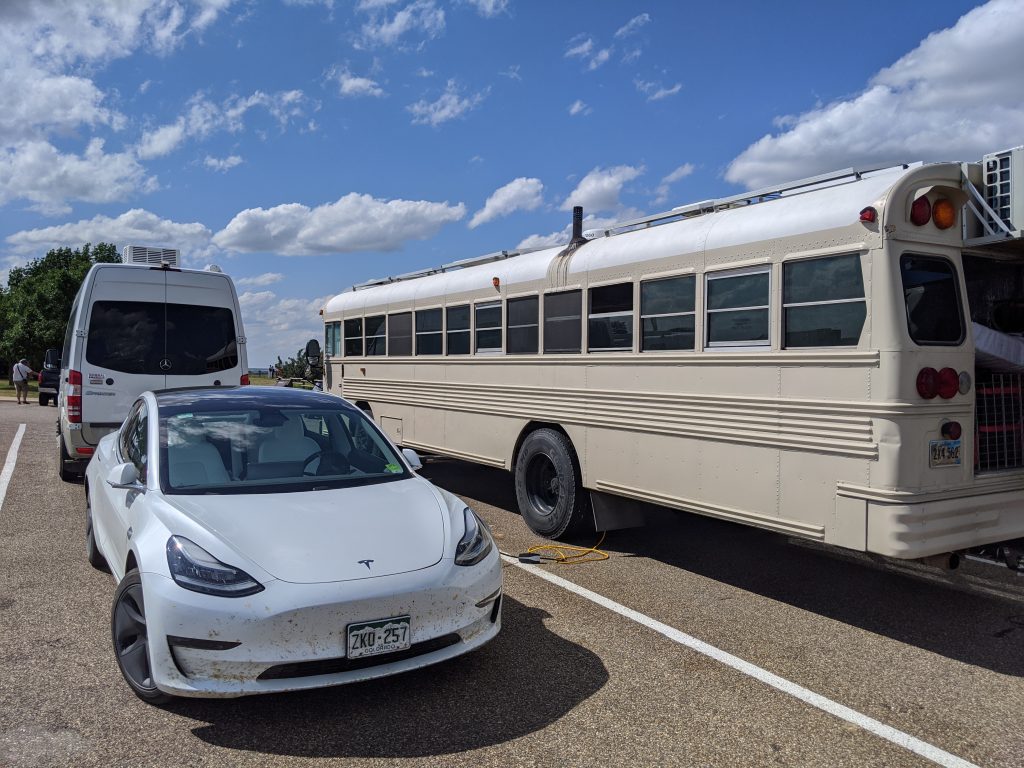 A man living in his full-sized school bus that solar powers!  We had stopped at the Visitors Center for Theodore Roosevelt National Park, and this bus driver saw us roll in. I’m not sure how long he had been there or how many Teslas he had seen in North Dakota, but he wanted to see if his solar-powered bus had enough oomph to give us a jolt. (Check out Peter’s life on Instagram at @vancampinglifestyle)

Why not give it a try?

With the photo-op op’d, we exchanged Instagram handles and journeyed on to our hike within the park.

No Loops, No Fording, But Flies! 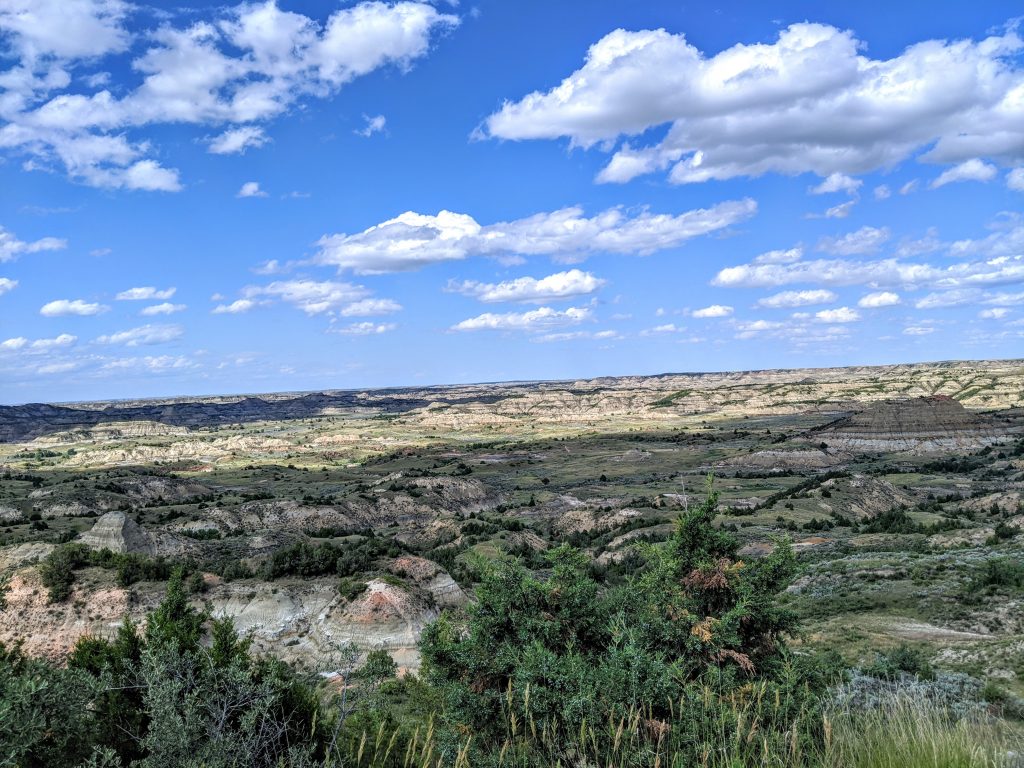 Teddy Roosevelt National Park does not have very many looping trails. The biggest loop is about five miles, and in the first 100 yards, you must wade a river. My daughter’s feet, unfortunately, had lost the battle with a new pair of dress shoes, and blisters peppered every corner. Her boots barely comforted her torn up feet, so the thought of taking off boots, fording the river, then putting boots back onto wet feet didn’t appeal to her, or me as her mom who would have to hear the whining.

We picked another trail based on the recommendation of the ranger in the Visitors Center. Billed as a good hike that starts in a prairie dog town and then meanders along a creek through the bluffs, we thought it’d be a perfect trail for some car-wary, overhiked adventurers looking for something fairly easy and also quintessential North Dakota.

I love Patagonia’s incredible outerwear. Get your discount here. On the way to the trail, we passed a gorgeous herd of the famous wild horses in the park. My daughter snapped a pic and sent it to her cowgirl friend who promptly responded with, “ugh, feral horses!” We giggled. 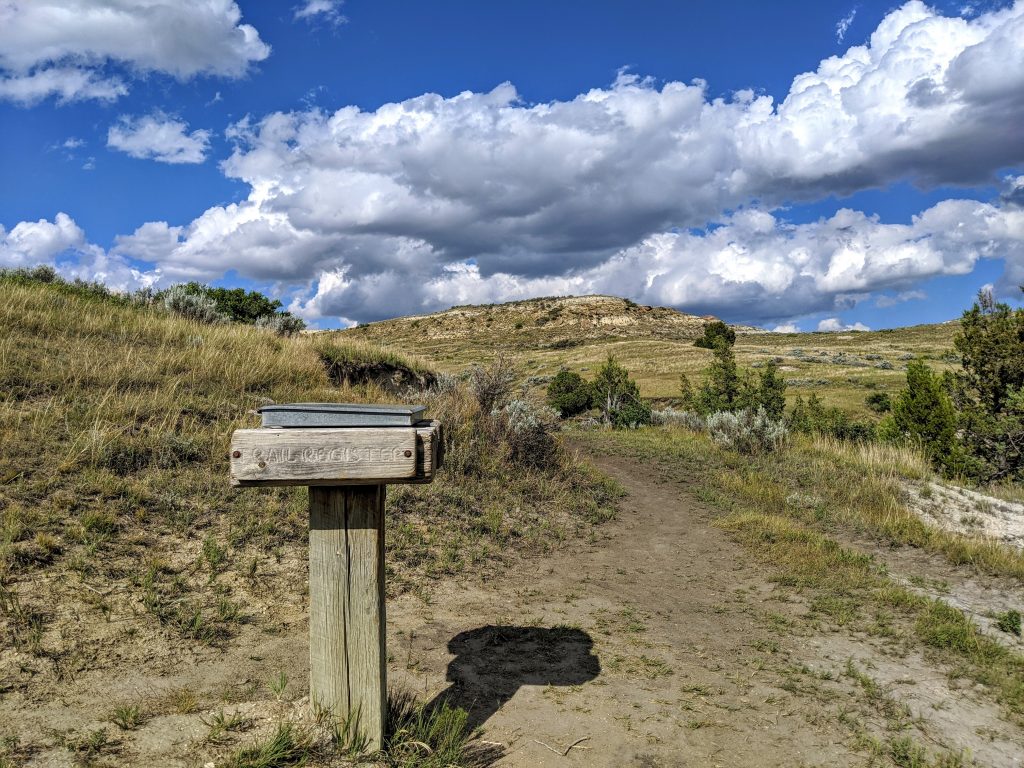 At the trailhead, we laced up our boots and headed out in about 79 degree weather. A breeze blew. Thank heavens. Because when it didn’t blow, the horse flies attacked us like a buffet of human smorgasbord. They’d land on the backs of our legs, and the person behind us would yell, “back left, upper right” as a preemptive attempt for the hiker to swat the fly before it took a bite.

No matter how cute the prairie dogs, their distractions didn’t ease the pain of these nasty flying teeth taking nickel-sized bites out of our precious skin. We hustled along. 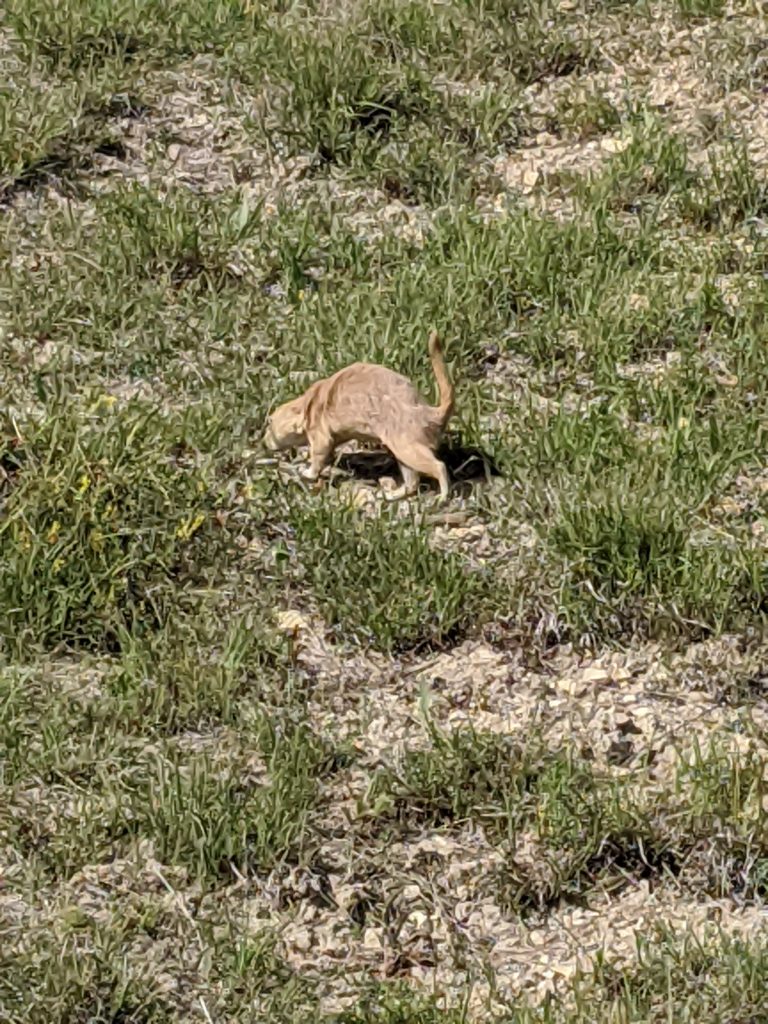 After clearing the prairie dog town, things got a bit better. We hiked along a gurgling creek to a bluff and out to fantastic western views. I felt like I was in the original paintings that western adventurers painted to convince Teddy Roosevelt, Gifford Pinchot and John Muir to start conservation movements.

Caught in a Western Landscape 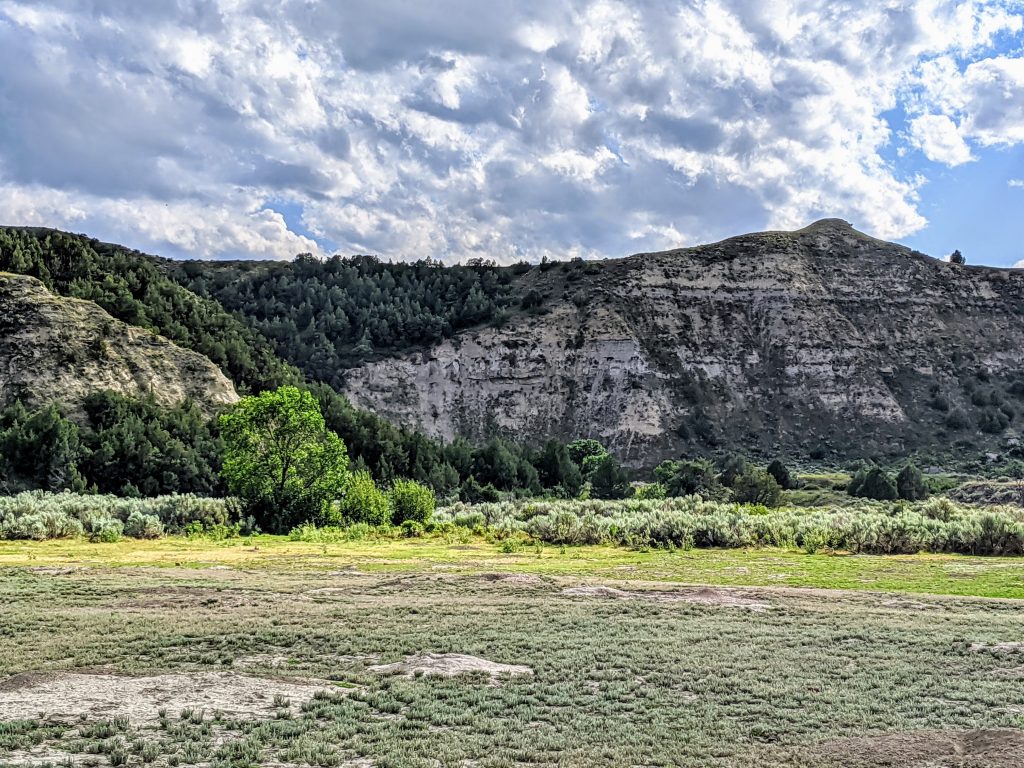 Stunning might be the word, but it doesn’t capture the feeling that overtook me. Although the views weren’t grandiose like those from the top of a 14er in Rocky Mountain National Park or shocking like the arches in Arches National Park, it was compelling. 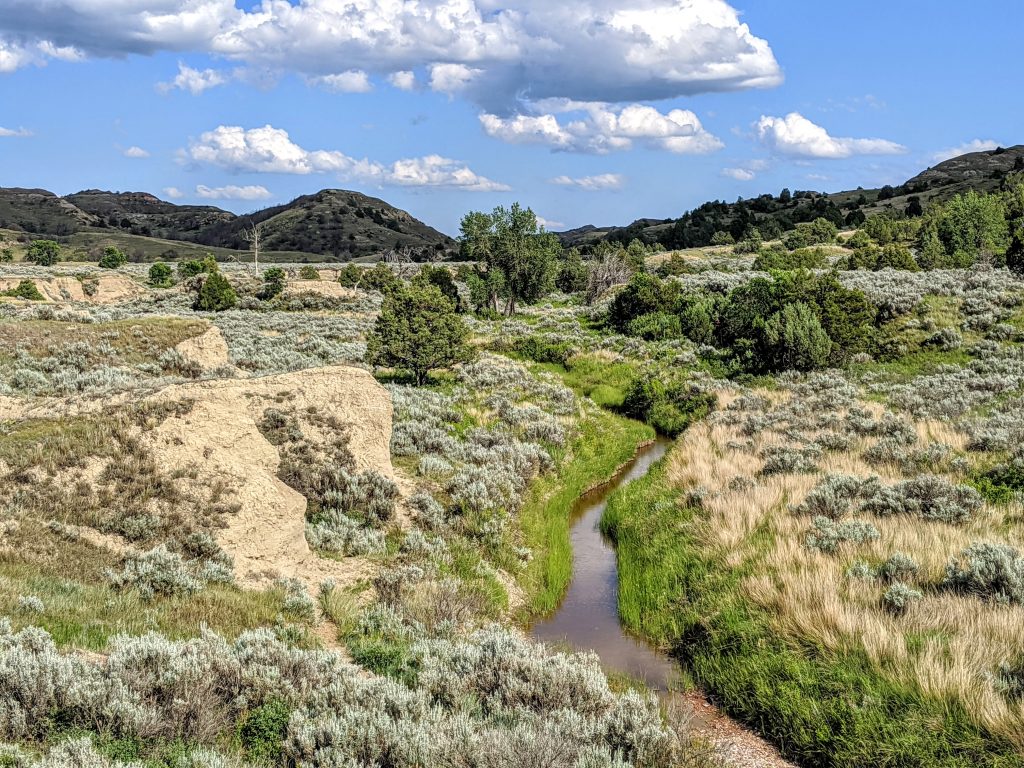 Compelling enough to convince others how important our national lands are and how they need to be protected and conserved, not cast off to the highest gas and petroleum bidder, like what’s happened at Bears Ears and other public lands. 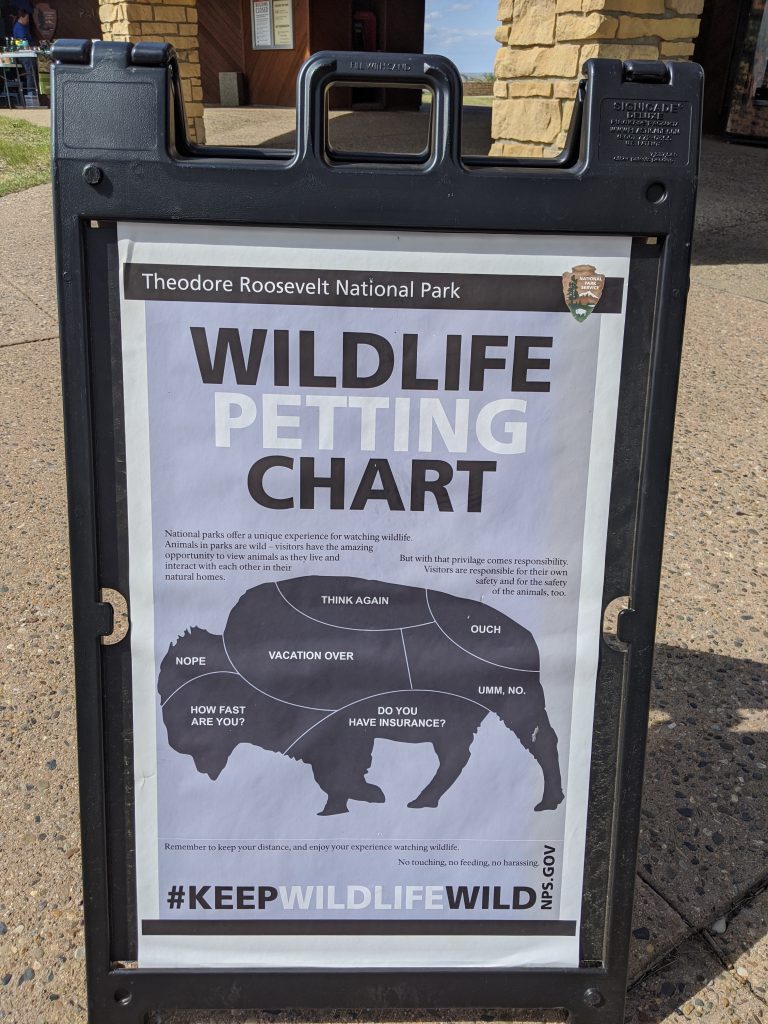 Although we wanted to continue our hike, the flies finally won the battle. We hustled back to the car, but we weren’t finished with our desire to hike in the park. We continued along the main road of the park (which is a loop but half of it was closed due to a rock slide), and along the way, we found bison that we could almost touch from the car.

Where do I get my gear? REI exclusively. I love their return policy. 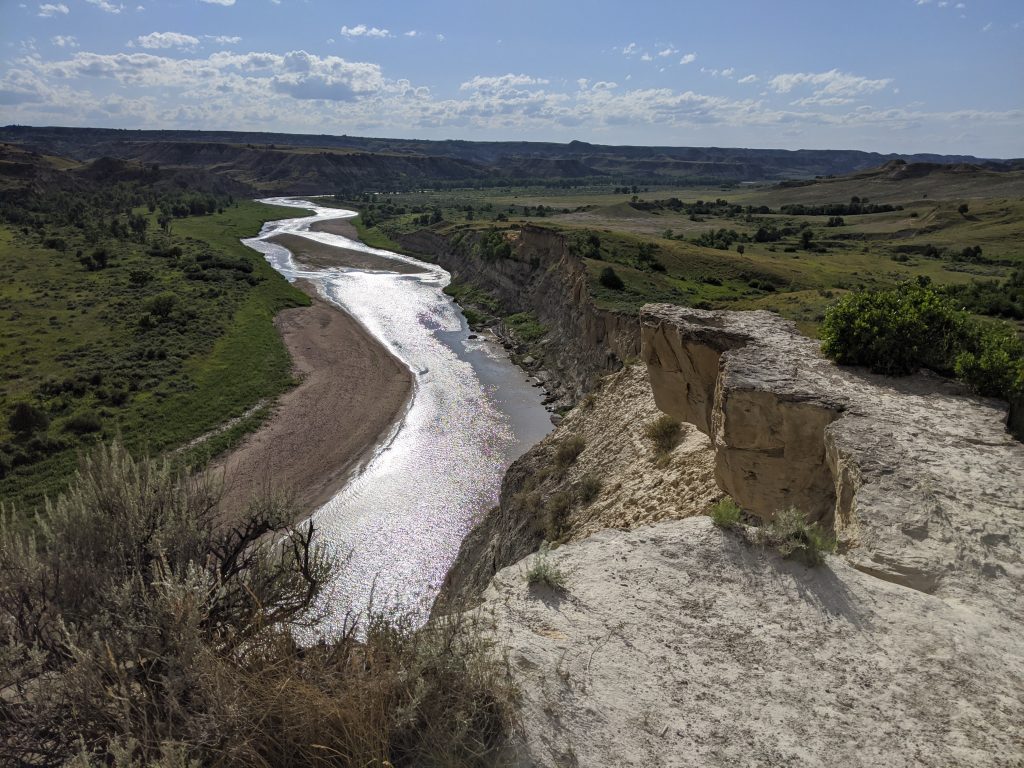 Another trailhead popped up, enticing us out of the car yet again. The ranger had also suggested the Wind Cave Trail, a short little loop that popped you up over the Little Missouri River for another fantastic view. As we parked, we noticed a small group at the trailhead and then another small group about 100 yards up the trail.

The groups were looking at each other, gesturing and yelling. From the parking lot, we wondered what the heck was going on. Then immediately I knew. A snake!

A rattler spiraled in the center of the trial, rattling to her heart’s content. No one was going to pass her on this trail. And there was no way to get around her or over her either. The group on the far side of the snake couldn’t finish the last part of the hike, and the group on the near side of the snake couldn’t start. The snake owned the trail and was not going to give it up despite the rock throwing and yelling the far group tossed at the snake.

We took our picture, then found a different trail up to the view point.

It was worth every fun step, which of course, were gingerly taken as we anticipated other snakes that never arrived. 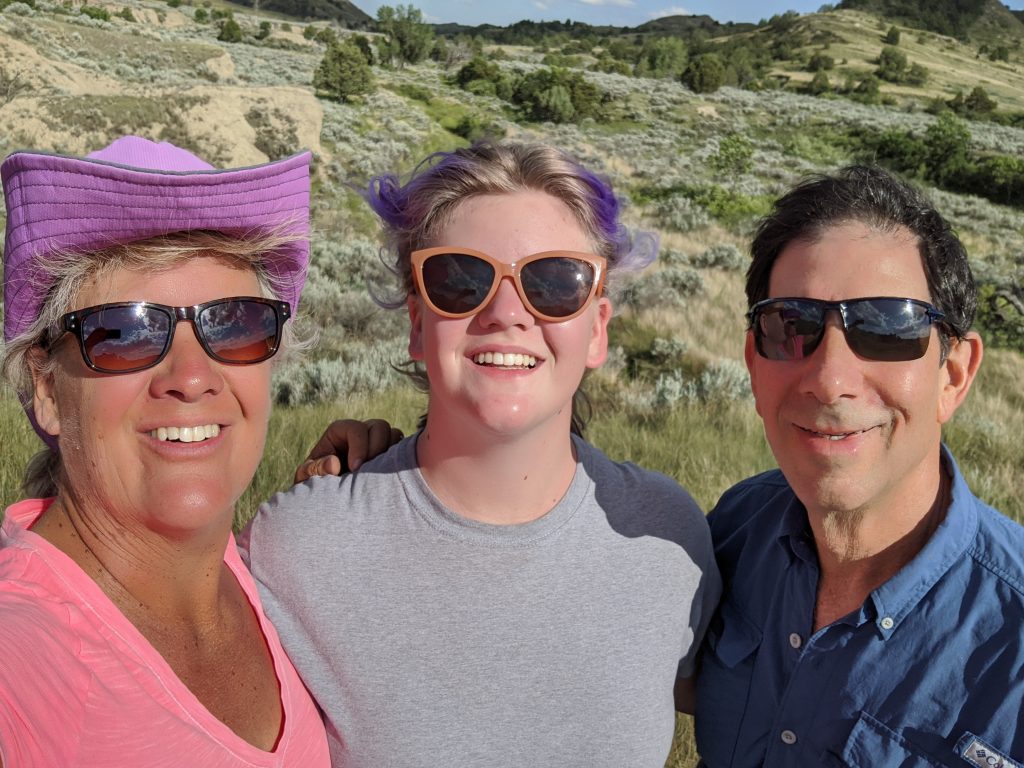 After a long day driving, charging the Tesla with a solar-powered bus, dodging horse flies, and avoiding snakes, we returned to Dickinson. The little restaurant attached to our La Quinta had good diner food and, surprise, poutine! (read about my poutine hunt in Wisconsin.)

We stopped in for a bite then picked up a good night’s sleep and a quick charge of the car before we made the 12-hour drive back to Denver the next day. 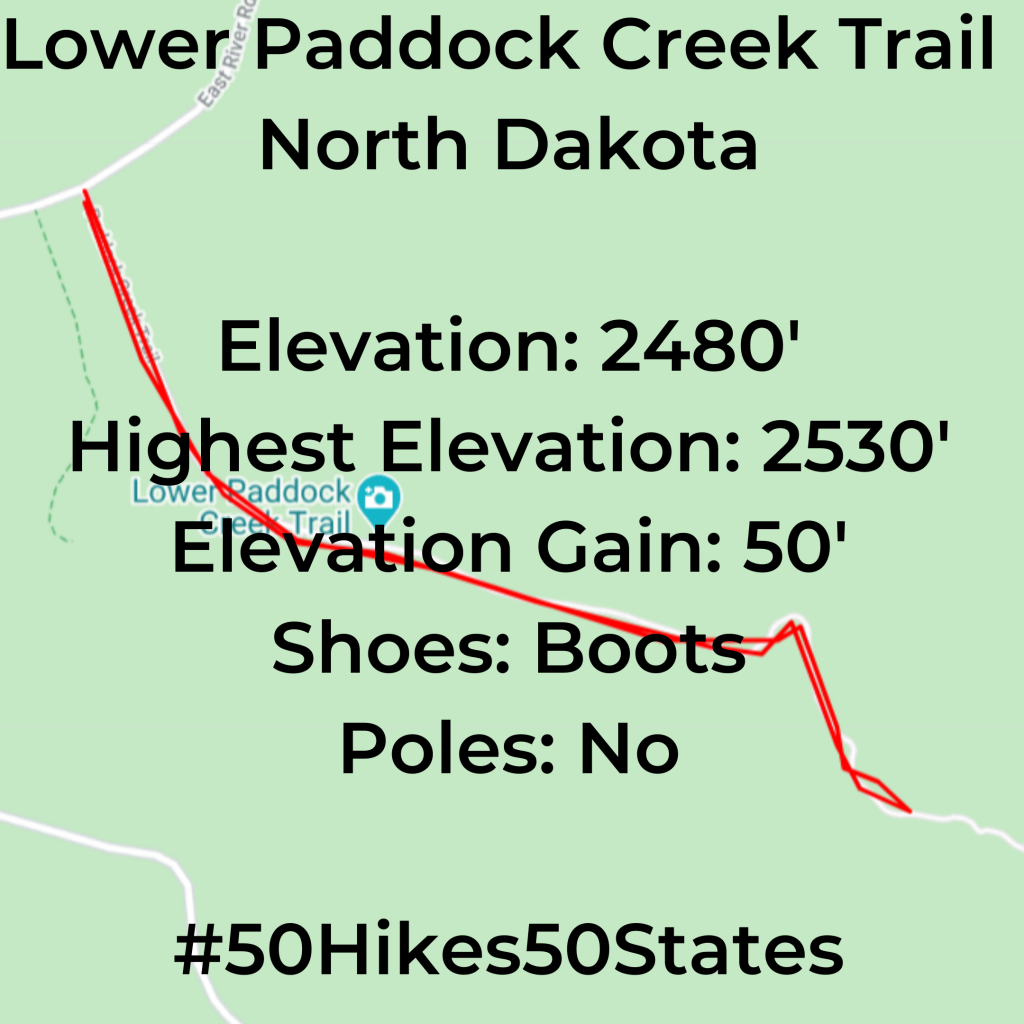