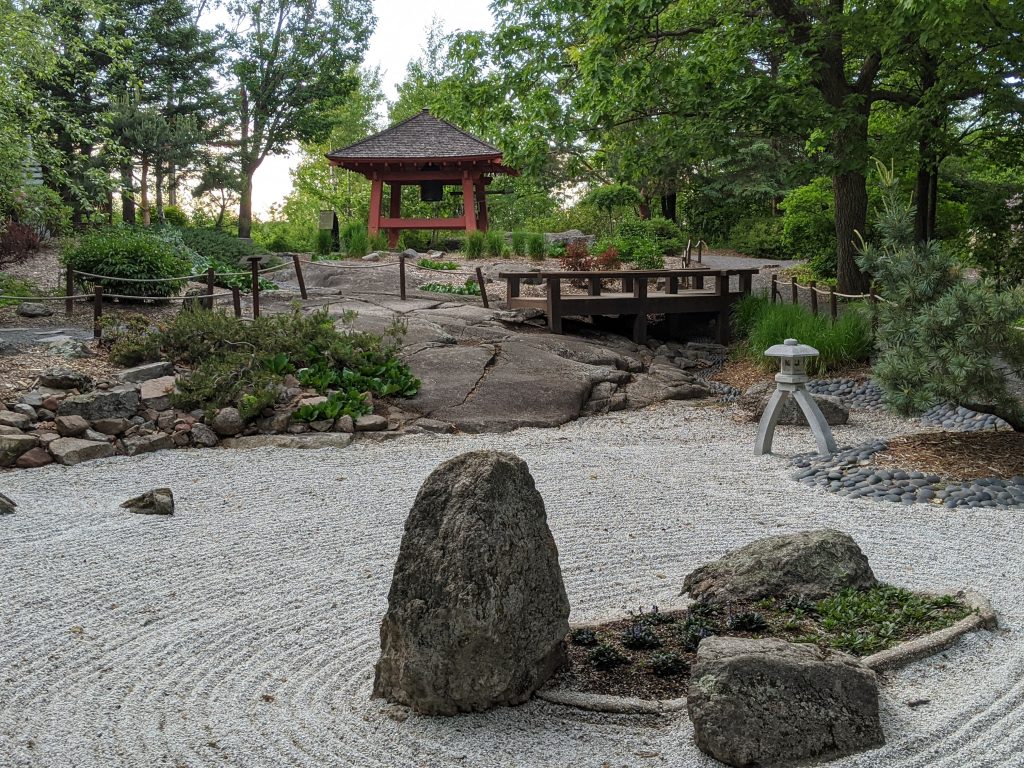 As the Black Lives Matter Movement ignited across the country with protests everywhere, we headed to Minneapolis, the center of the George Floyd protests. Our Southwest flight was packed, all but the middle seats, and our new masks from Oaxaca graced our faces. I was a bit anxious to embark on an upper midwest version of our 50 Hikes 50 States Project.

Although normally I would have loved to visit the capitol and its twin city, we felt a bit vulnerable in a rental car without local knowledge, so we avoided the center of the protests and immediately headed north to Duluth. In order to hike three states in this weekend, which would include Wisconsin and Michigan, we had to get moving.

A Squeezed in Minnesota Hike

Not sure if we’d be able to squeeze a Minnesota hike in late on a Friday, I had planned a short, easy hike near Duluth. If we got there later in the day, we could make it a sunset hike, or if we had to wait until the next morning, we could knock it out before the longer, harder hike in Wisconsin that I had planned on Saturday. 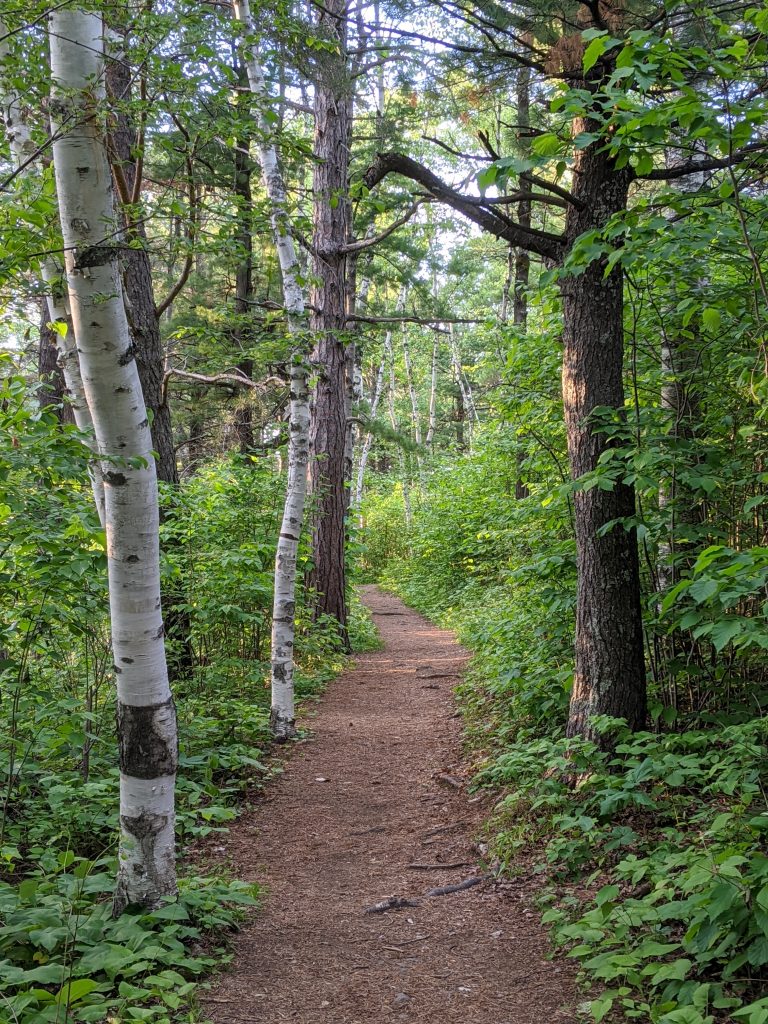 Lucky for us, being so far north in the US, the sun wasn’t going to set until almost 9:00 pm, so we parked at the trailhead at 7 and headed out. I had picked a section of the Superior Hiking Trail, a 310-mile trail that passes along the North Shore area of Lake Superior. It’s a well-maintained footpath managed by a non-profit who does a super job with wayfaring, trail signage and maintenance. Trailheads frequently dot the trail, making it easy to pick it up or get off of it.

From the City to the Woods, Quickly 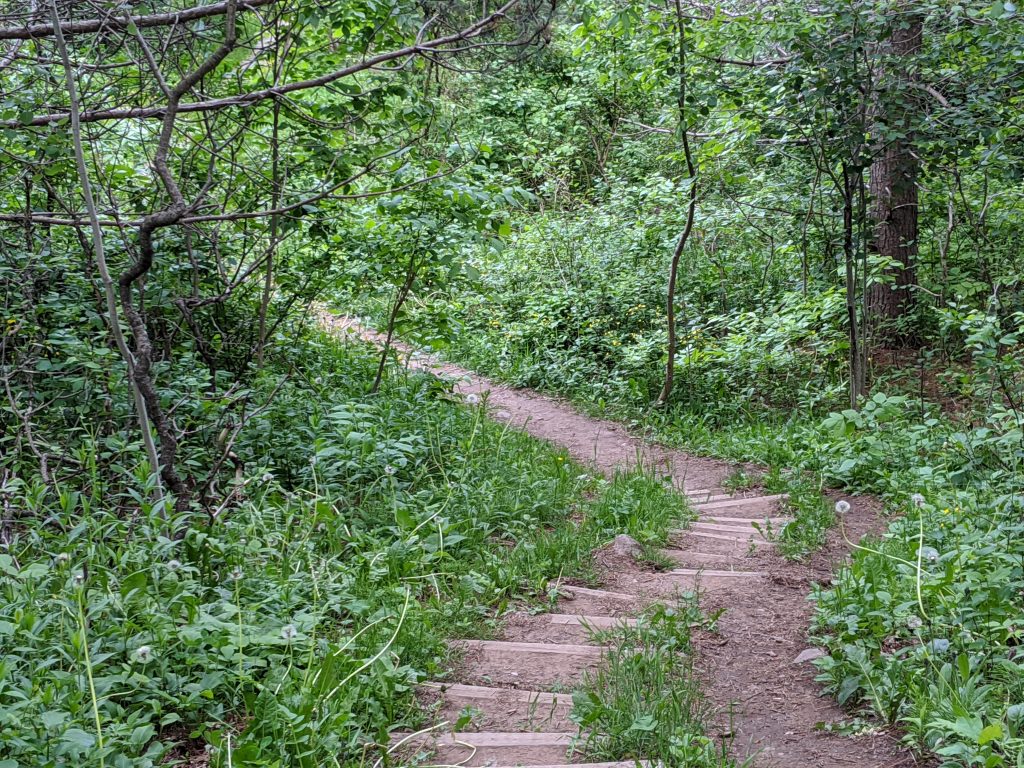 We had picked an out-n-back section near Duluth called the “N. 24th Avenue W. Trailhead” which the website described as having stunning views. After crossing a major thoroughfare with views into Duluth and not being exactly sure where we should go, a Superior Trail marker showed up at the perfect time. It directed us into the woods on a dirt path.

And instantly, we were hiking. Downtown Duluth couldn’t have been more than 5 miles away, but we felt like we were lost in the wilderness. The trail meandered occasionally behind the backyards of small homes, across creeks, and through different stands of birch and ash.

Running parallel to the footpath was a well-groomed and signed biking trail, separating the bikers from the hikers. That was a nice treat. 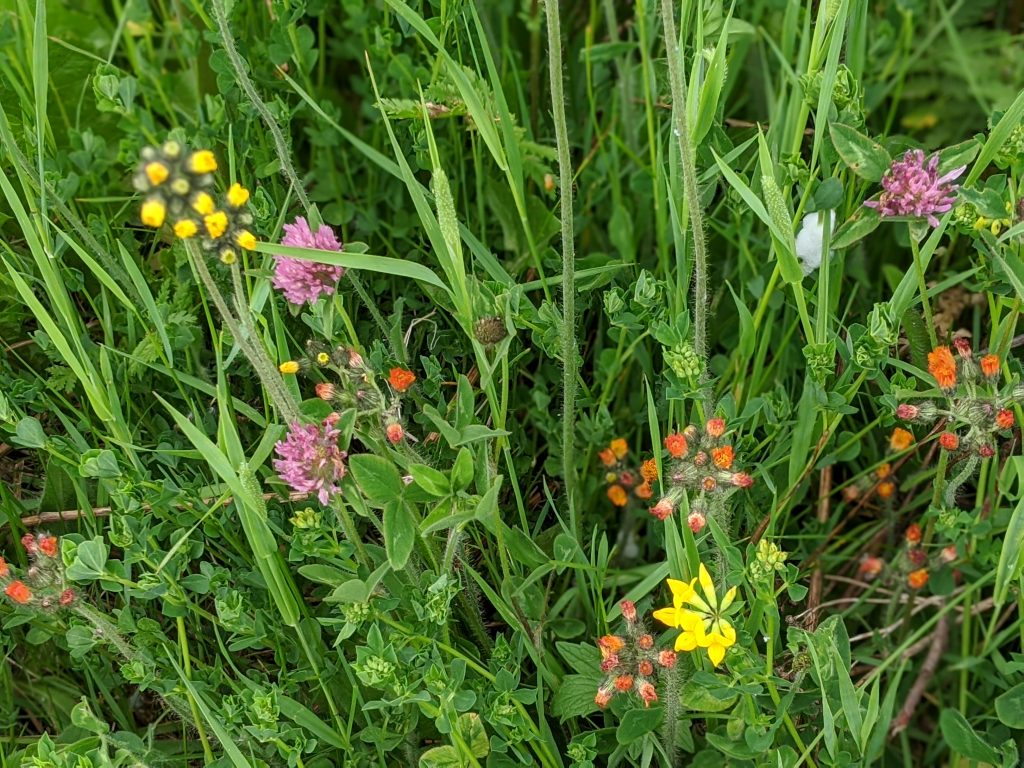 Wildflowers burst everywhere. And lo and behold, we found aspen trees too! Later we googled “aspen in Minnesota” and discovered one of the largest stands of aspen grows in Minnesota. I had no idea! I assumed they needed higher altitude, like those in Aspen, CO. 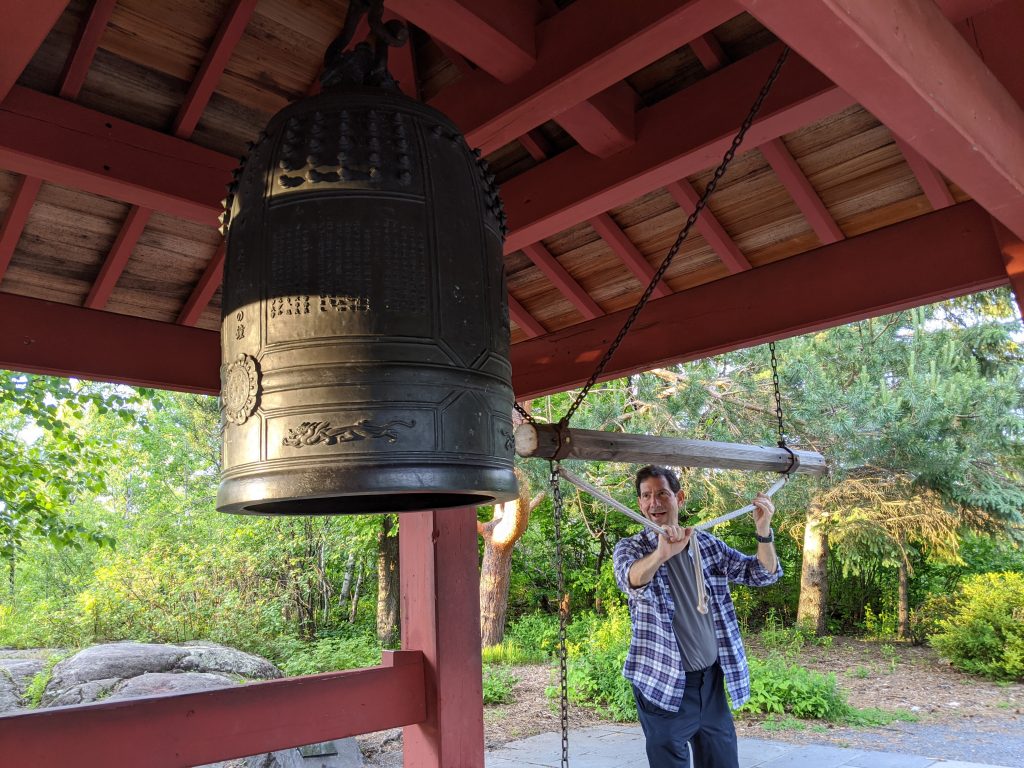 Pink hues started to streak across the sky, warning us that we would need to turn around soon unless we wanted to hike in the dark. Right at the point I thought we should turn, we saw a pagoda with a bell hanging from it. We had arrived at the Peace Pavilion in Enger Park. What a surprise!

An aromatic garden of jasmine and azalea surrounded by a groomed sand garden invited us in. The short story: the bell represented the relationship between the US and Japan through its sister cities, and it promoted peace and tranquility.

We couldn’t resist breaking the tranquil moment by ringing the bell.

A short trail scurried up the hill behind us, and we just had to make a quick adventure to the top where we expected great views. To our surprise, we found the Enger Tower, built to honor a successful Norwegian who donated 2/3 of his furniture-business fortune to create the park and tower. We climbed the tower just in time for sunset and scrumptious views of Duluth. 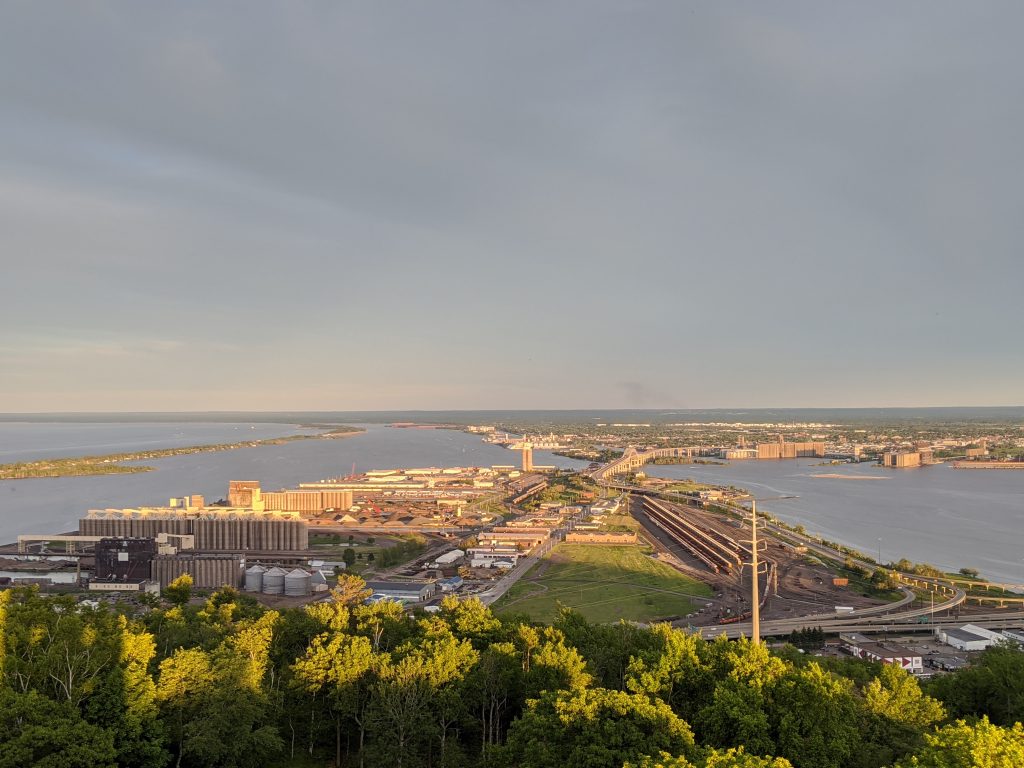 With darkness falling, we hustled back to the trailhead in record time. Our hotel sat not far away in a cute renovated section of Duluth. We checked in, then hustled to find something to eat. With breweries closing and markets closed, we found a tex-mex place with outdoor seating. Some vegetarian fajitas quickly showed up at our table at 10:15 at night. I think we might have eaten the kitchen’s last meal for the day.

I only wished we would have time to go visit the Rustic Inn Cafe up the street for some pie. Maybe next time? 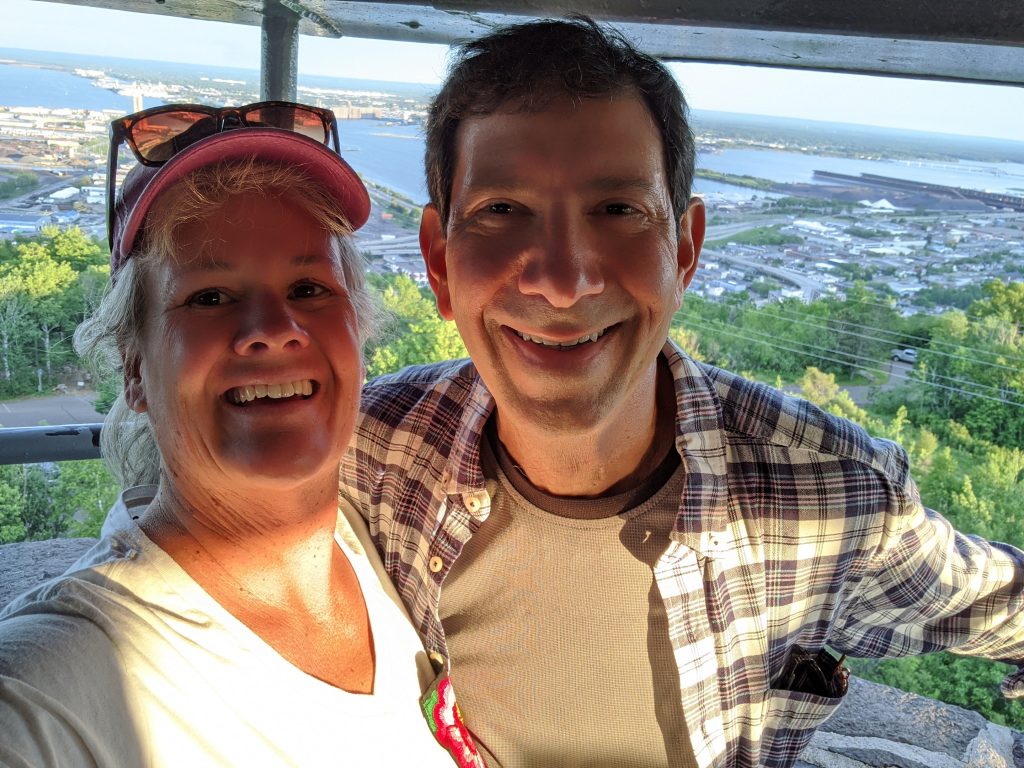 Although we had to hustle to squeeze in our Minnesota hike, Duluth presently surprised me. As a large port for the transport of iron ore and grain, its pretty position along Lake Superior is inviting. In the summer at least! At our hotel at a marina on top a spit of land that hosts the summer beach goers of Duluth, I could certainly see the attraction for a lake home and a lackadaisical summer. Appreciating a six-week summer season takes on a whole new meaning here.

But I could not image how the lake turns solid in the winter in negative temps! Ice fishing anyone? No, not for me.

Next stop, the Apostle Island National Lakeshore in Wisconsin.