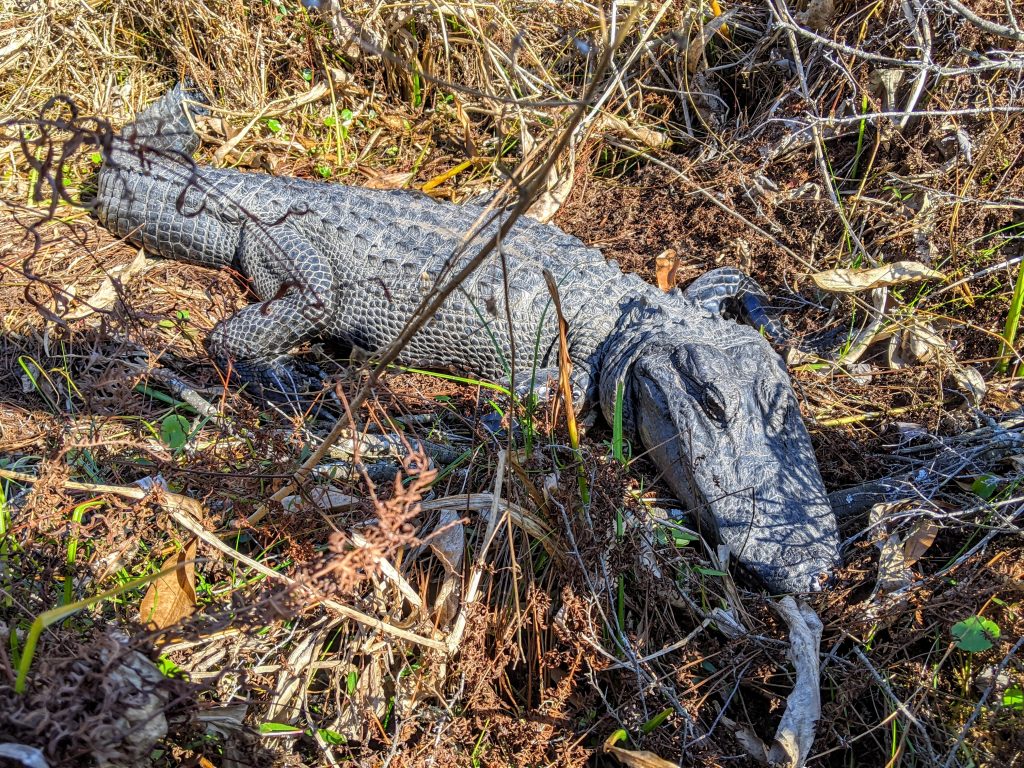 After an emotional day of fond memories, reunions, and favorite ecosystems during our hike in Mississippi, we returned to New Orleans to do our Louisiana hike for our 50 Hikes 50 States Project.

New Orleans welcomed us with its over-exuberant personality; our first welcome was by a white poodle with red and green tufts on his head and legs, then by a giant hug from our Airbnb host, (click here to get $55 off your first trip with my code) and then by the Shh! ladies of the Krewe of Krampus parade in honor of the holidays.

Lafitte Smuggles Us In 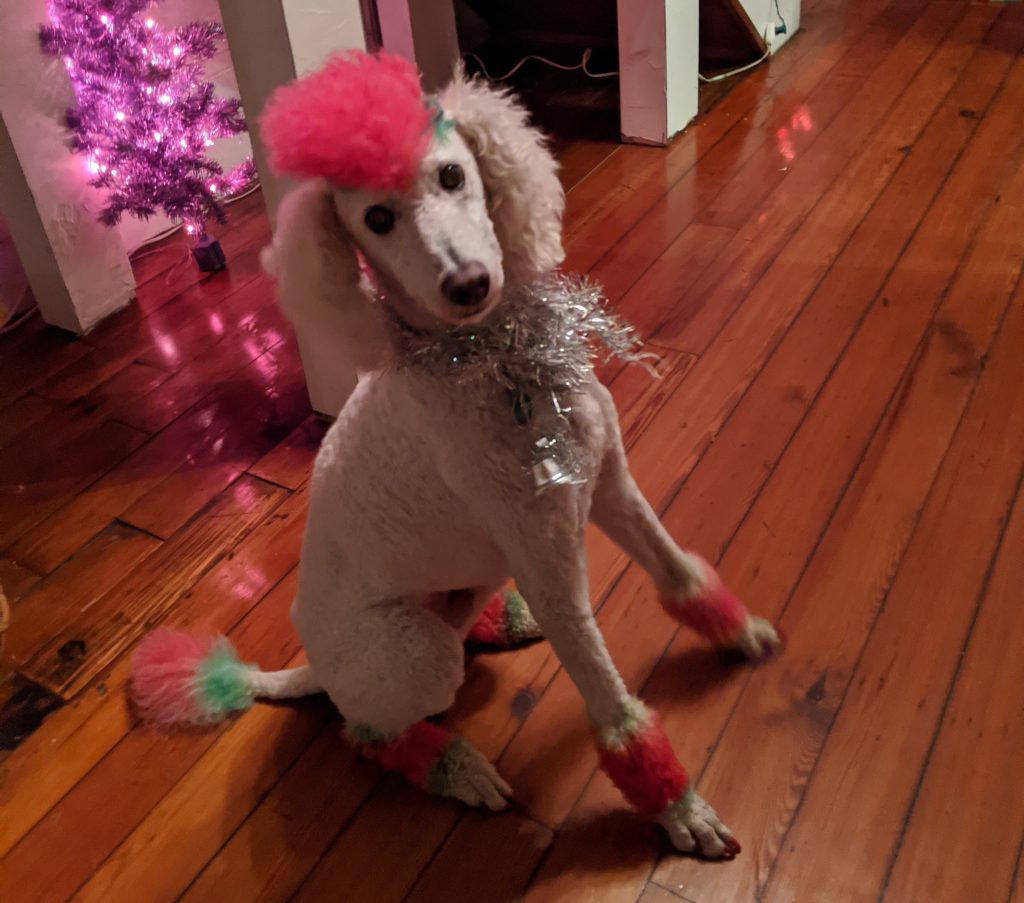 New Orleans is a fun place that many associate with debauchery, drinking and drooling. I haven’t been a fan for a long time, and I usually try to escape the French Quarter as quickly as I can. Having lived so close to New Orleans for almost a decade while living in Pensacola, New Orleans was often a weekend getaway I’d get cajoled into with friends. Each time I visited, I swore I’d get to know more of New Orleans than the French Quarter, but never really did. But on this visit, I promised to amend my promises, get out of downtown New Orleans, and learn a bit about this historic place.

The beginning of our adventure started in our Airbnb. The hostess’ grandmother greeted us in shorts and covered in tinsel. She and her friends were decorating their 20 foot tall Christmas tree. Holiday music jingled throughout the house and Max the Christmas dog directed traffic. Our host had decorated our room festively with red, green, and Santa, and the atmosphere sparkled with glitter and glee. In the room, we found the hostess’ guide to New Orleans. In that, we found the history of the house.

It seem the house might have been the getaway place for Jean Lafitte, famed smuggler, to relax and hide while doing commerce in New Orleans. Perhaps we were even staying in the room where he slept? This gumbo of truth and fiction peaked my curiosity; for our Louisiana hike, I had picked out the Barataria Preserve in the Jean Lafitte National Historic Park, and staying in Lafitte’s room only seemed fitting. 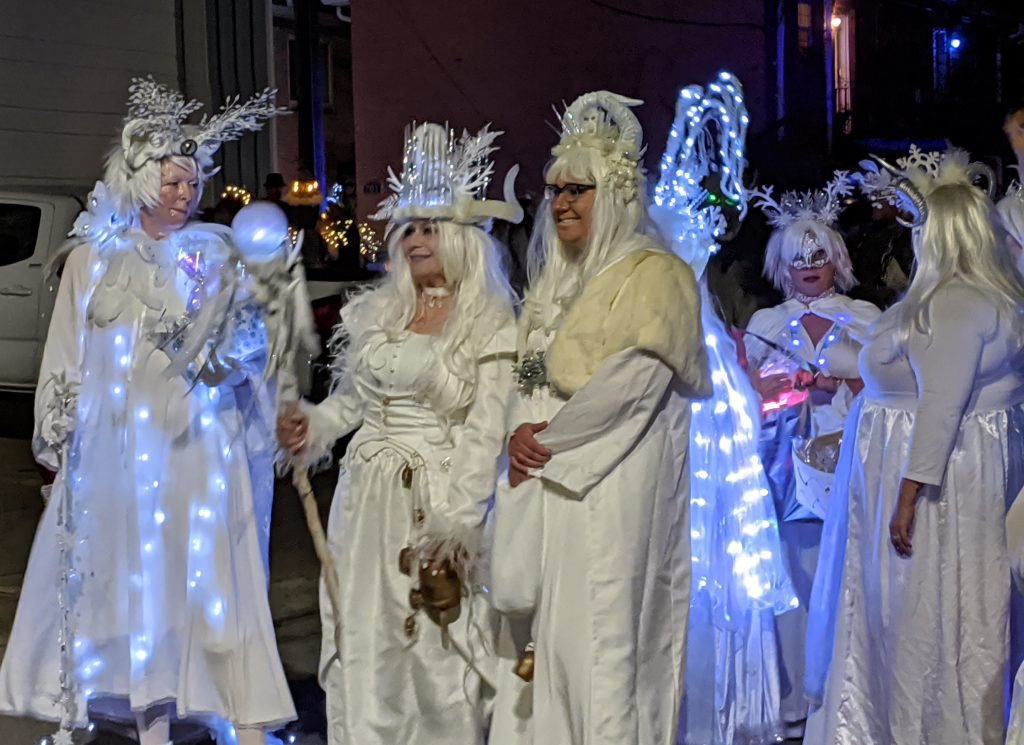 We had arrived to New Orleans in the late evening, just in time to catch one of the holiday parades. It’s New Orleans, there must be a reason for a parade, right? Our hostess set us off to the Krewe of Krampus parade. A short walking parade, the characters within it represent Krampus. He’s Saint Nick’s alter ego. He snatches bad children and punishes them into being good. A little creepy but totally New Orleans, we enjoyed a night of lighted costumes, over-the-top masks, and the Shhh Girls. These fairies “shhhs” you and give you bags of coal. I got two bags and one Shhh! 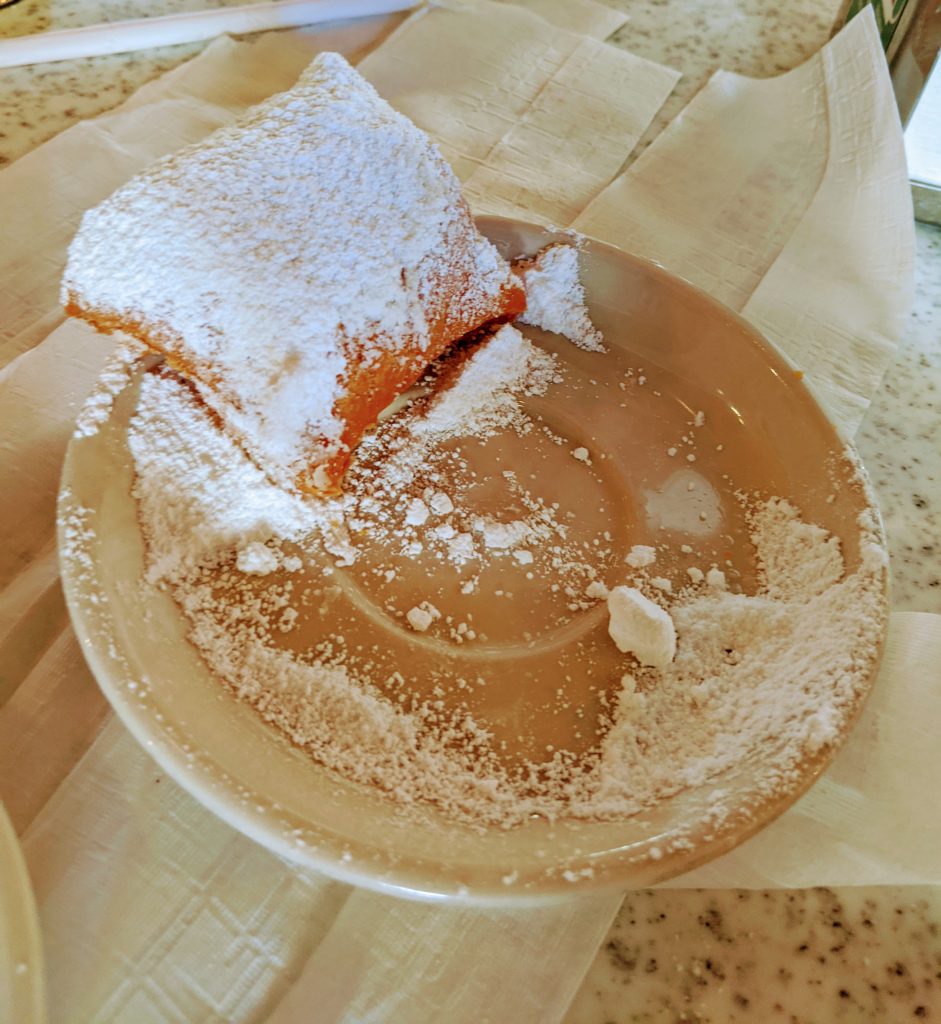 We left a beignet for you!

The next morning, we packed out bags, scratched Max good-bye and headed to Cafe du Monde. I’ve been there dozens of times; I  know it’s touristy; but I still couldn’t resist. At 8 am on a Sunday, New Orleans Saints and San Francisco 49er fans packed the house. We snarfed down our sugary puffs of warmed dough, called beignets, and then headed south of New Orleans for another twenty minutes, arriving at the Barataria Preserve of the Jean Lafitte National Historical Park and Preserve. 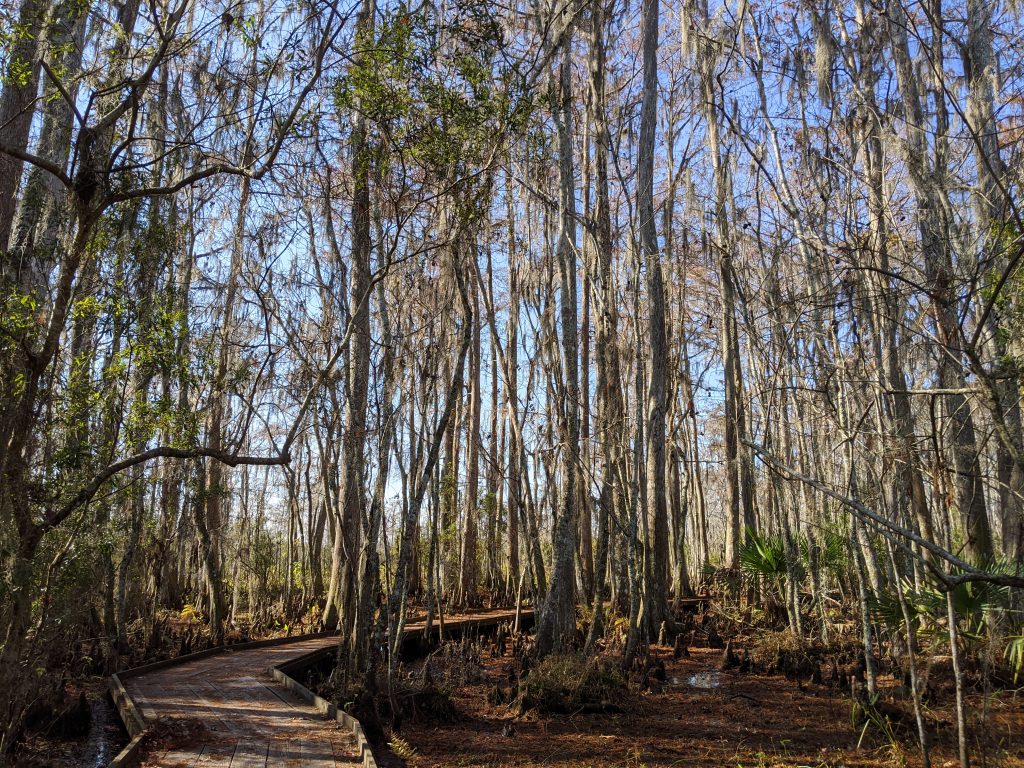 We picked the best day of the year to hike a swamp. The temperature hovered right around 68 degrees, a bright blue sky offered just a bit of warmth, and the mosquitos slept for the winter. In the Visitors Center, we traced the smuggling route of Jean Lafitte and read the history. Was Lafitte a pirate or a patriot? Slave trader or slave abolitionist? The story is vague, but the adventure and intrigue captures imaginations around the world. It did mine!

Also embedded in the history of smuggling and trade, the National Park Service illustrated how climate change and rising water are sinking New Orleans. In this edge of the US, where the Mississippi meanders its delta to the Gulf of Mexico, we’re losing a football field of ground every 40 minutes. At -131 elevation, I wondered if I’d need a snorkel!

A brief discussion with the ranger about our 50 Hikes 50 States Project sent us down the boardwalk on an out-n-back hike through the marshes and swamps of Lafitte’s Barataria life. Walking on natural levees, elevated boardwalks, and gravel trails, our 4-mile adventure took us past palmetto, cypress knees, towering cypress laden with Spanish moss, canals of tannin-tainted water, and alligators on the Palmetto, Bayou Coquille and Marsh Overlook Trails.

A Momma Gator with Three Feet 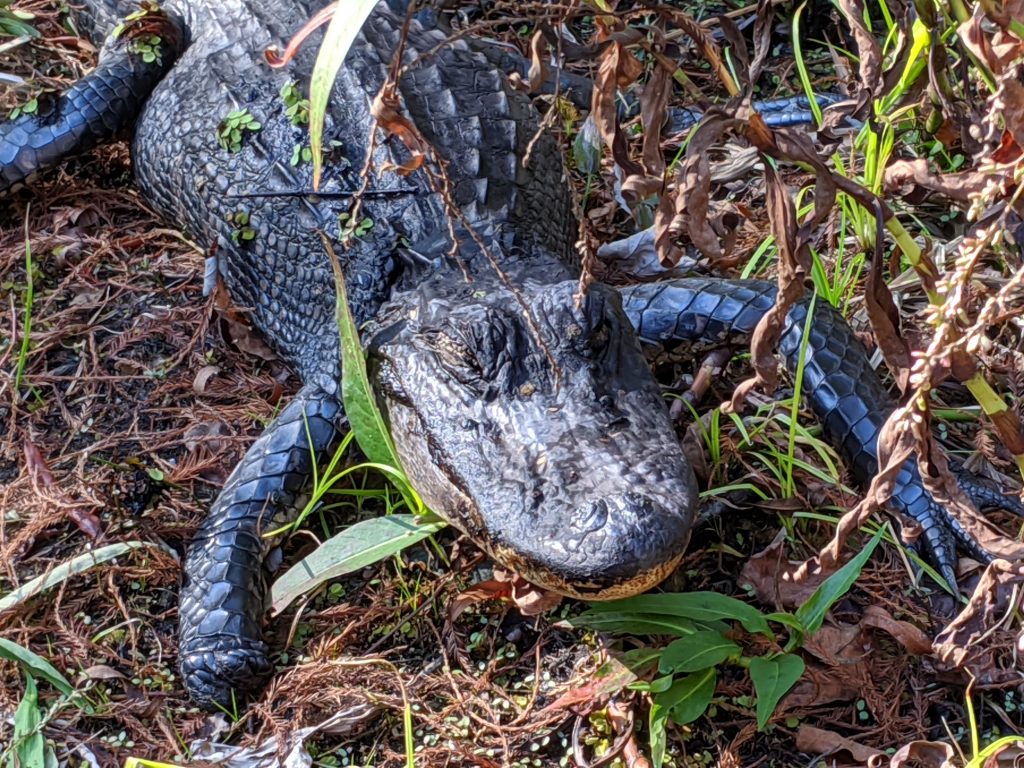 The first gator rested six inches from the boardwalk. We could have touched her. Instead, we admired her dark skin and amusing grin. She lacked a front right foot. On a later discussion with the ranger, he told us her babies were nearby and she often hangs in that spot. It’s warm and dry, and her babies hang just leeward of her in the water. And no, he had no idea why she was three-footed. 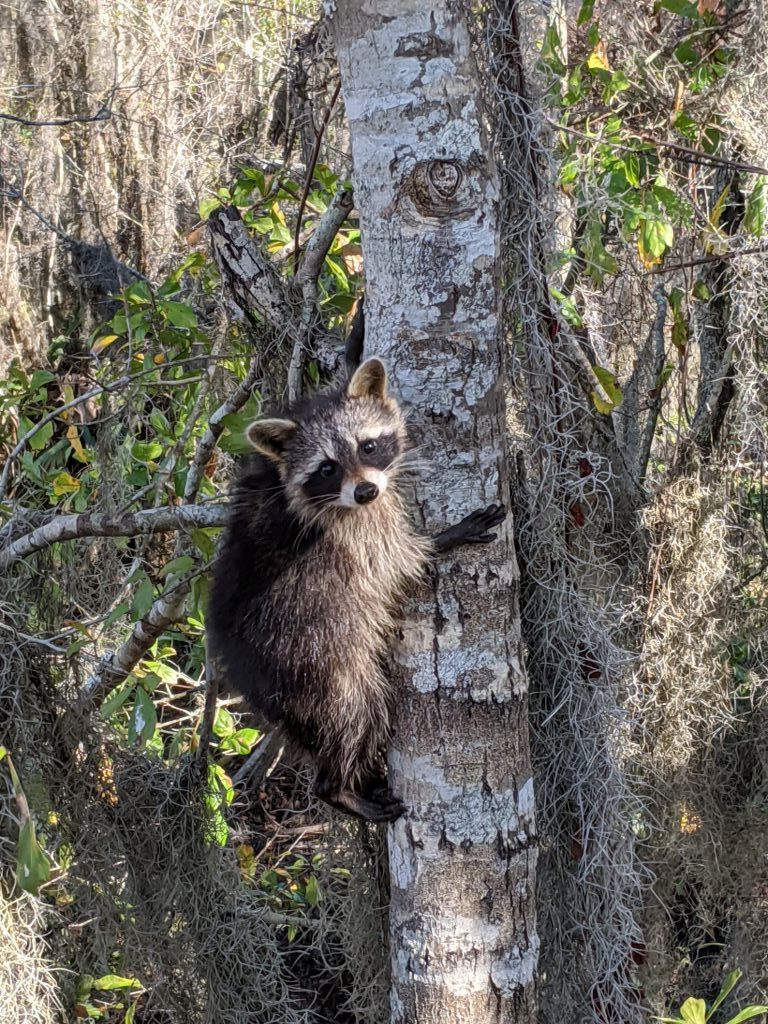 Raccoons scampered along with us, darting in and out of the wetlands fishing. When we sat on an elevated patio, they scampered up the tree to say hi, then dropped back beneath us to eat our granola bar crumbs.

Great blue heron and white egrets whomp-whomped their way into the air as we passed. 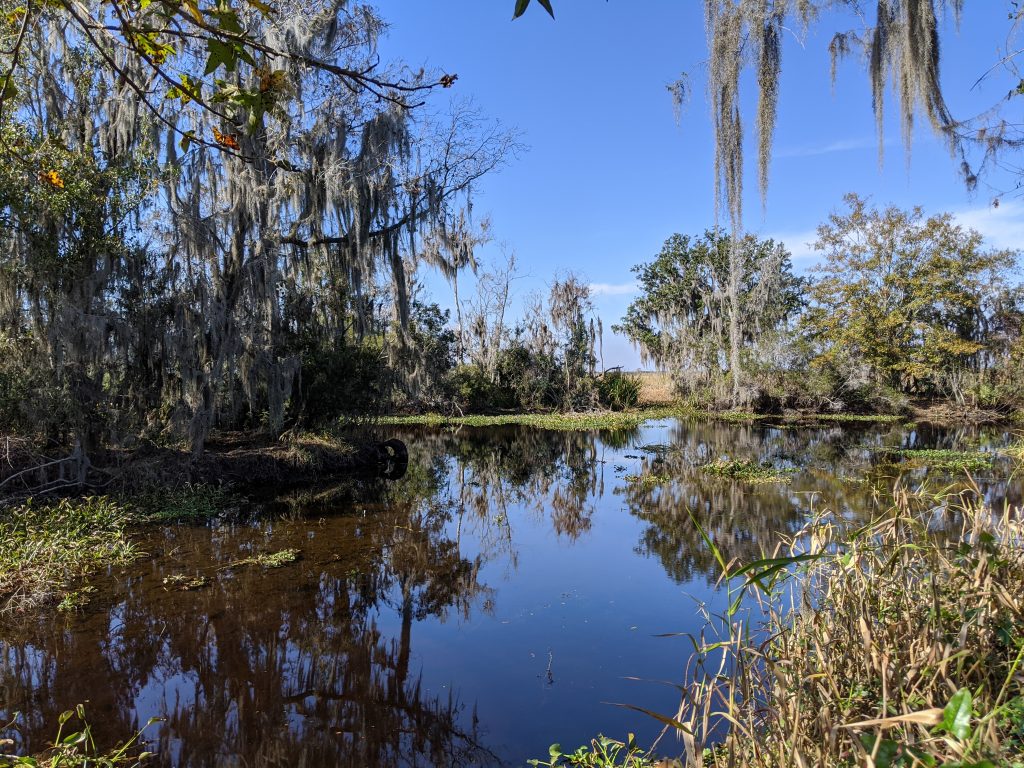 Throughout the hike, we’d occasionally see some cultural or natural interpretive signs from the National Park Service highlighting the swamps’ stories. One sign showed the high point in the swamp where slaves were presented to buyers. This brought about conversation between the hubs and me around how the Africans must have felt when they were dragged from the ships across alligator-infested swamps onto cypress knees to balance above the bayou on exhibition. I can’t even imagine the fear. 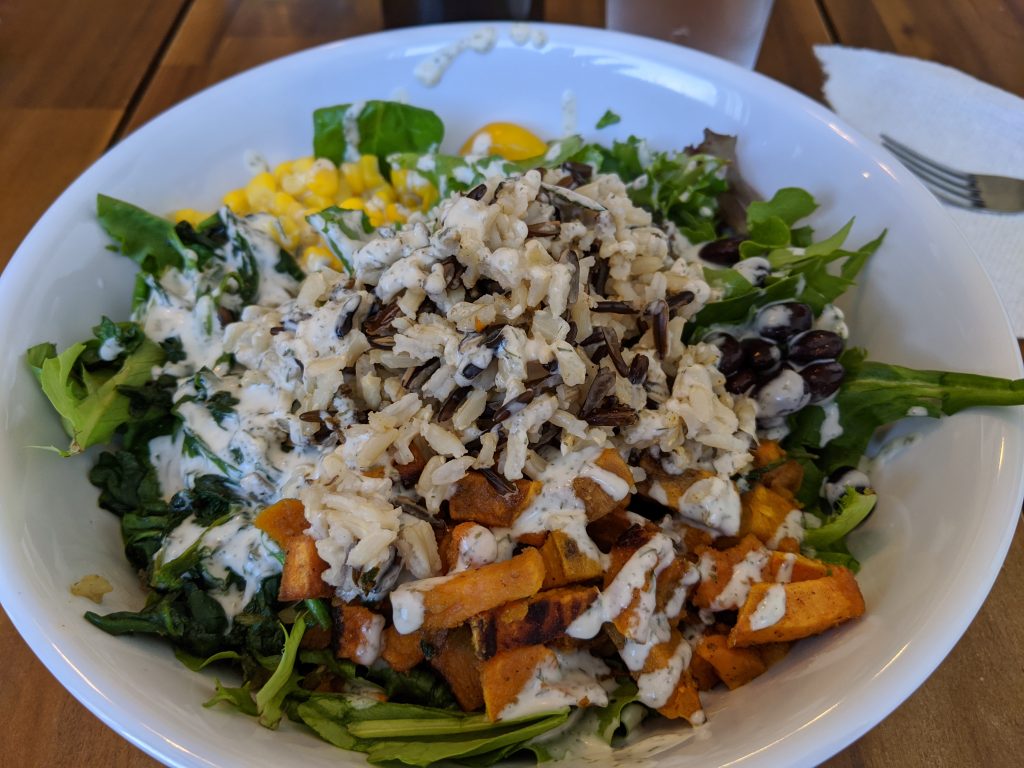 We returned to our car as the temperature started to get into the 70s. We were hungry. New Orleans certainly has its fair share of good food. We wanted to put our veganism to the test and sought out a new vegan restaurant, Nola Vegan. This small, cozy place welcomed us cheerfully. Sadly, though I was hoping they’d have a cajun menu of vegan jambalaya or etouffee. I settled for a yummy Buddha bowl, but I had wished for some creole in a bowl.

A Drive through the 9th Ward 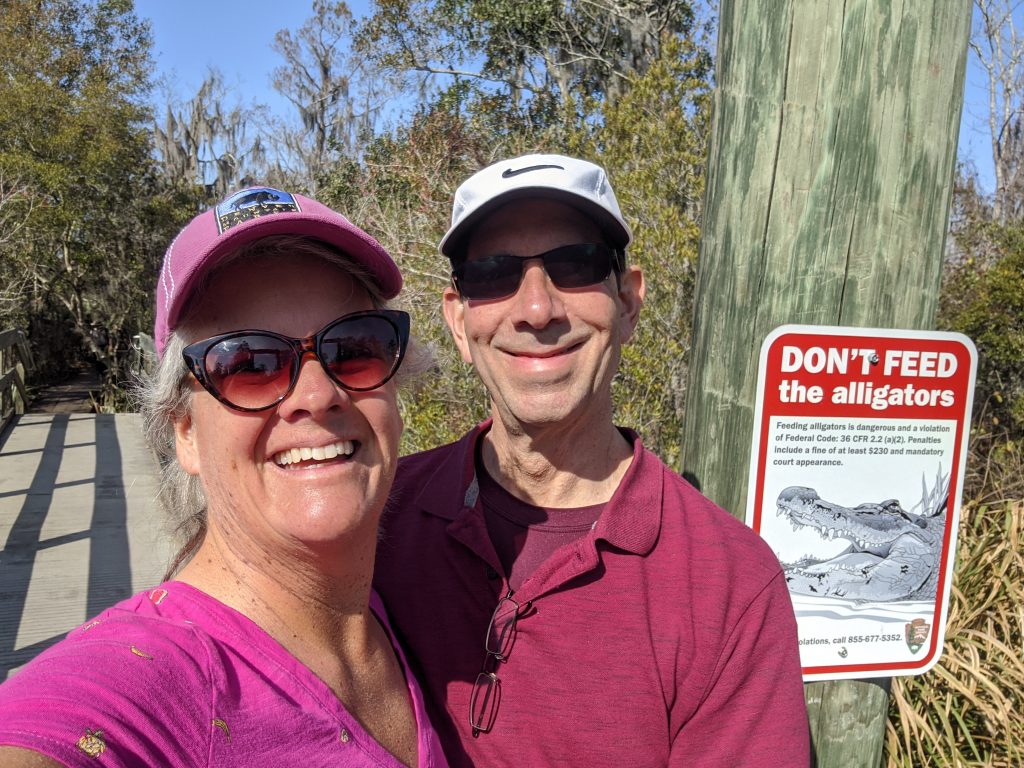 After lunch, we had an hour to spare before returning to New Orleans’ new airport. My husband, a civil engineer at heart, had always wanted to see where the levy had failed in the 9th Ward during Hurricane Katrina. We googled it up and drove into the neighborhood. Now, almost fifteen years later, it’s clear who survived and who didn’t. Many homes still shone with shiny new stilts and siding, while on other streets, vacant lots glared of missing homes and lost dreams. We walked to the top of the levy, a good 25 feet higher than the neighborhood and looked down into the once-twice-often-flooded basement of New Orleans. An historical marker captured the story but not the hope nor the fear of the place.

Our weekend in the south had started with playing the wrong music in the wrong place on the way to Mississippi, followed by getting caught in an island parade in Alabama, a fond memory of an environmental battle of long ago, a hug with a favorite artist, a giggle with a red and green dog, a groan through Louisiana history, and a glimpse into lives I will never fully understand. But one thing is for sure, on this trip to New Orleans, I began to love the place. And this time, I’m confident when I say that I’ll be back.