Download an interactive walking guide of this map by clicking here. 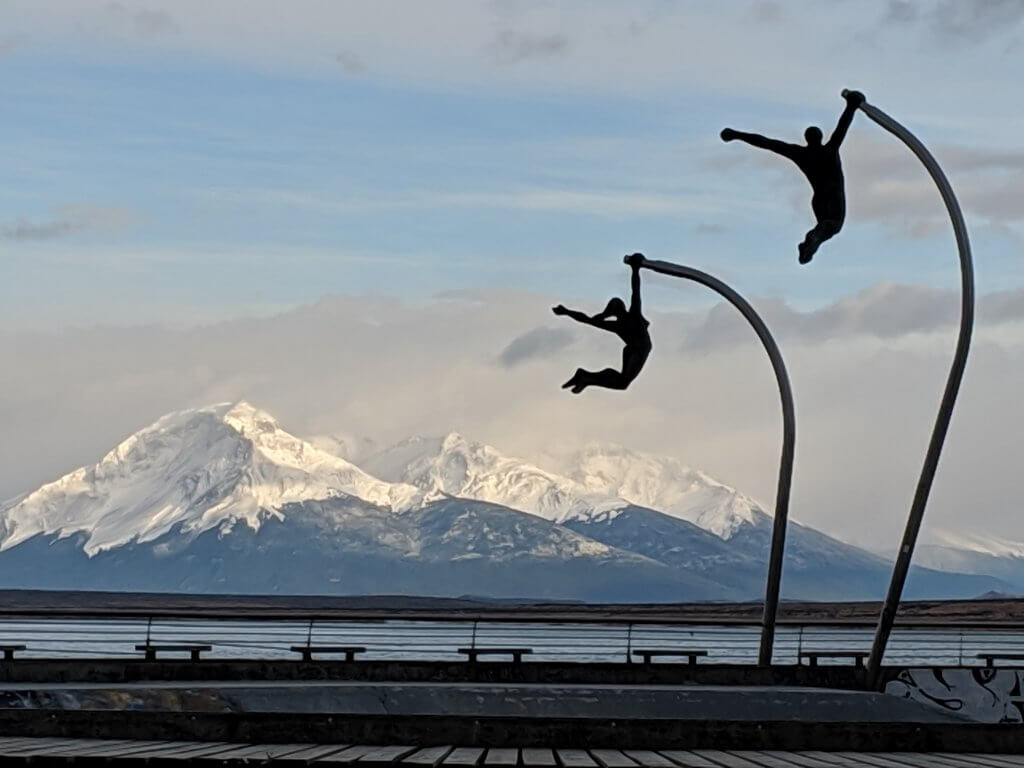 It’s easy to overlook Puerto Natalas. As the gateway to Patagonia, it sits in the shadow of the eighth natural wonder of the world at the base of Torres del Paine National Park. Hiking-booted folks often dash through the town on their way to see the great natural towers. But Puerto Natalas deserves some time, as this tiny town in the bottom of Chile fashions fun history around the story of big feet, “Patagonia.”

Take a Break in Puerto Natalas 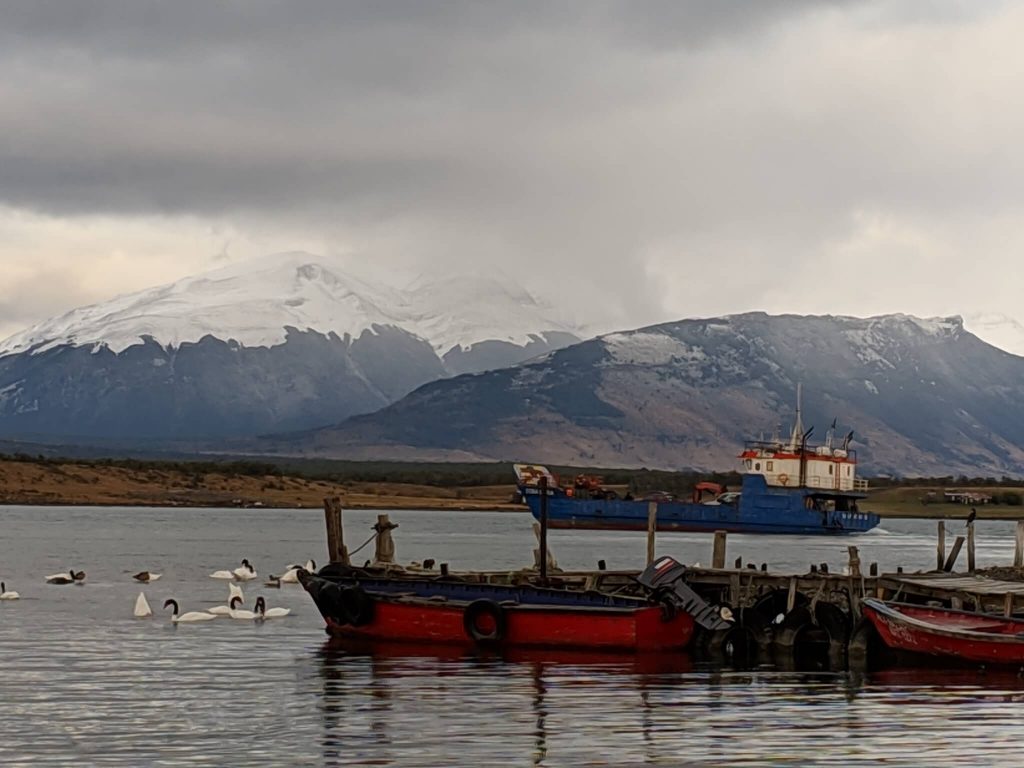 Like most other hikers to Patagonia, I hadn’t planned on spending many day-time hours in Puerto Natalas. My eyes, too, were set on grander vistas. But a bum knee kept me off a planned 15-mile hike, so I had to make the best of a lemons-to-lemonade day.

When the free walking tour guide didn’t show up, I took matters into my own hands. The Visitor’s Center staff provided a map with suggested highlights, and off I went on a 3-mile meander through town accompanied by a new friend from Spain I met on the sidewalk. She was also in the same situation as me. 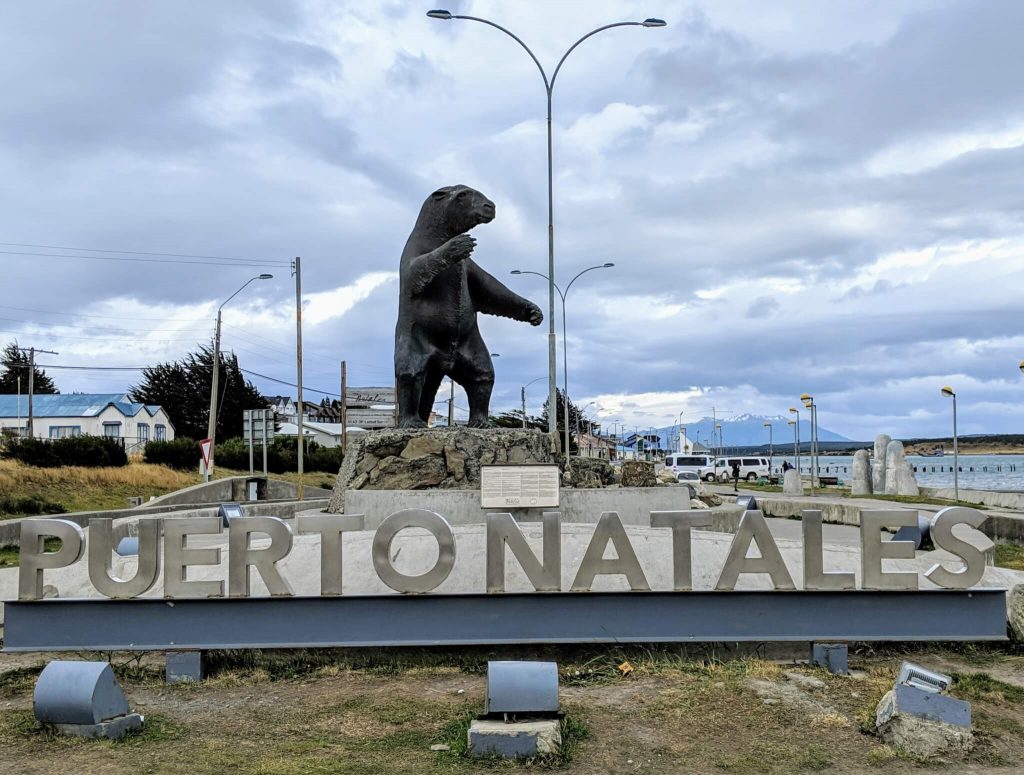 Our first stop was the giant milodon, an ancient oversized sloth, in the middle of the street. It’s the welcoming gate to Puerto Natalas, and reminds folks that bones of this magical creation were found nearby. Granted, a full skeleton has never been uncovered, so its the imagination of what a milodon might look like that welcomes adventurers to town. Around the milodon on this day was a pack of stray dogs monitoring traffic around this large dinosaur. It was more fun watching the dogs!

Give a Hand in Puerto Natalas 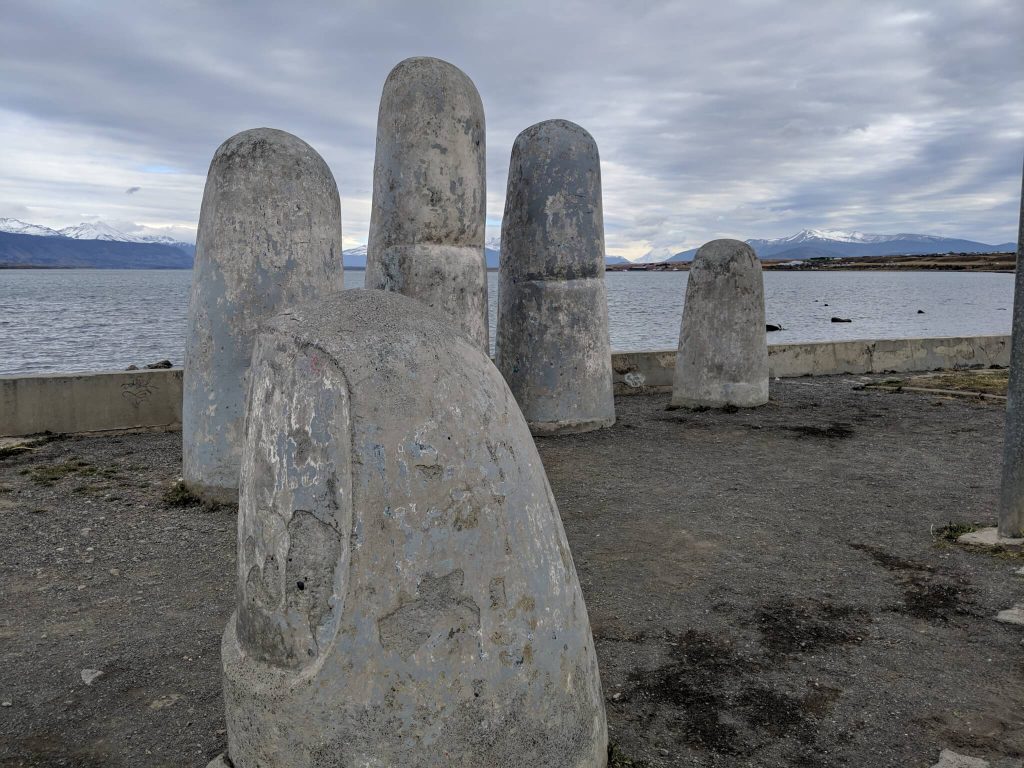 Just south of the milodon landmark, we found a creepy yet thought-provoking sculpture of a hand coming out of the ground called Monumiento La Mano by Mario Irarrazabal, a Chilean artist who has many other sculptures, including other hands, worldwide. This La Mano is a reproduction of the original found in Punta del Este, Uruguay. 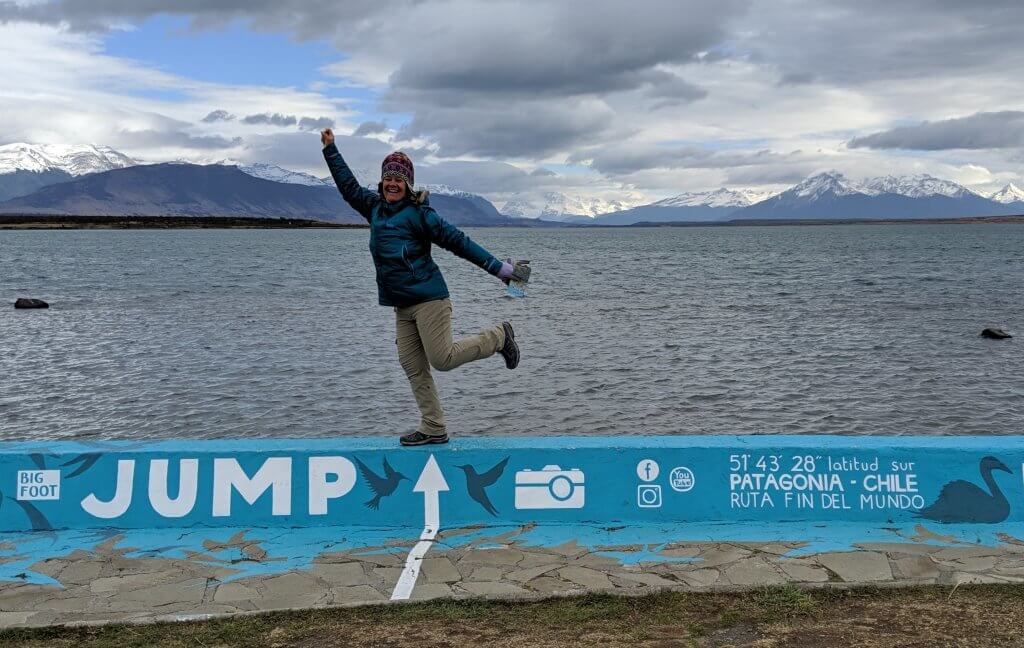 Continue south along the sidewalk to the two wharfs, Muelle Fiscal and Muelle Maritomo. These historic docks, one now long gone, and the other still operating, hold the keys to Puerto Natalas’ maritime history, where ships have come through here for hundreds of years to rest after traversing the Magellan Strait. You’ll want to visit during sunrise or sunset to catch some of the best pictures of Puerto Natalas, and don’t miss the fun Jump Point painted on the seawall. 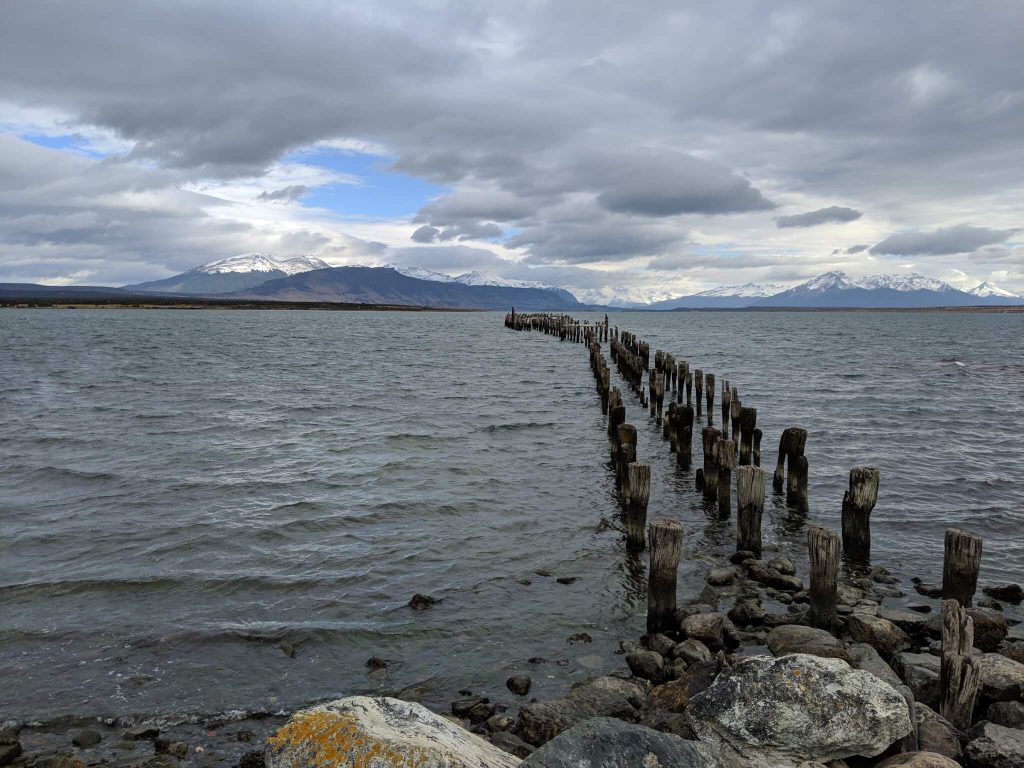 At Manual Bulnes, take a left and head north. In a few blocks you’ll come to the Museo Histórico Municipal, a fabulous local museum of Patagonia’s history. Not only is there an excellent interpretation of the Shankara and Aiken cultures, but you’ll get insight into how difficult it is to live at the bottom of the continent. Double check the hours before you go; they are closed on Sundays.

A Long Mural of a Long Story 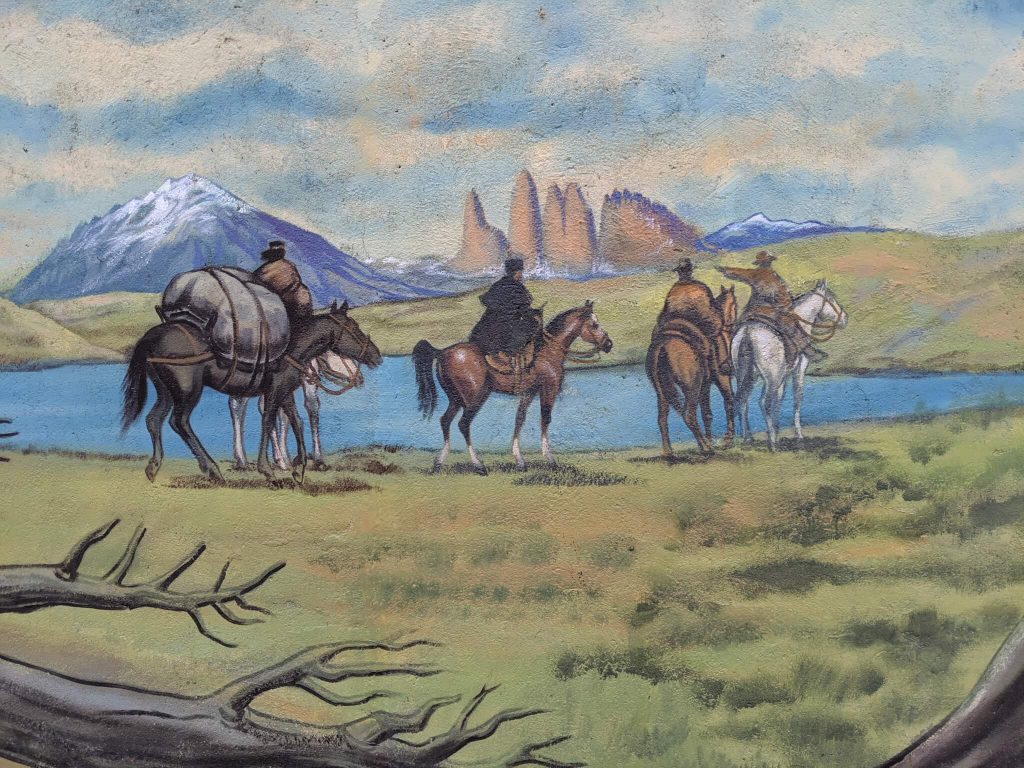 Every good Chilean town has a Plaza de Armas square, and Puerto Natalas is no exception. Be sure to walk through it on the way to the fabulous mural that travels for blocks along Phillippi street between PJE Don Busco and Angamos Street. Depicting the stories of the local tribes, the sighting of Juan Ladrilleros, and the arrival of Europeans, this artistic interpretation tells a fabulous story as you make your way to the Pueblo Artesanal Market on the corner of Phillippi and Angamos St. 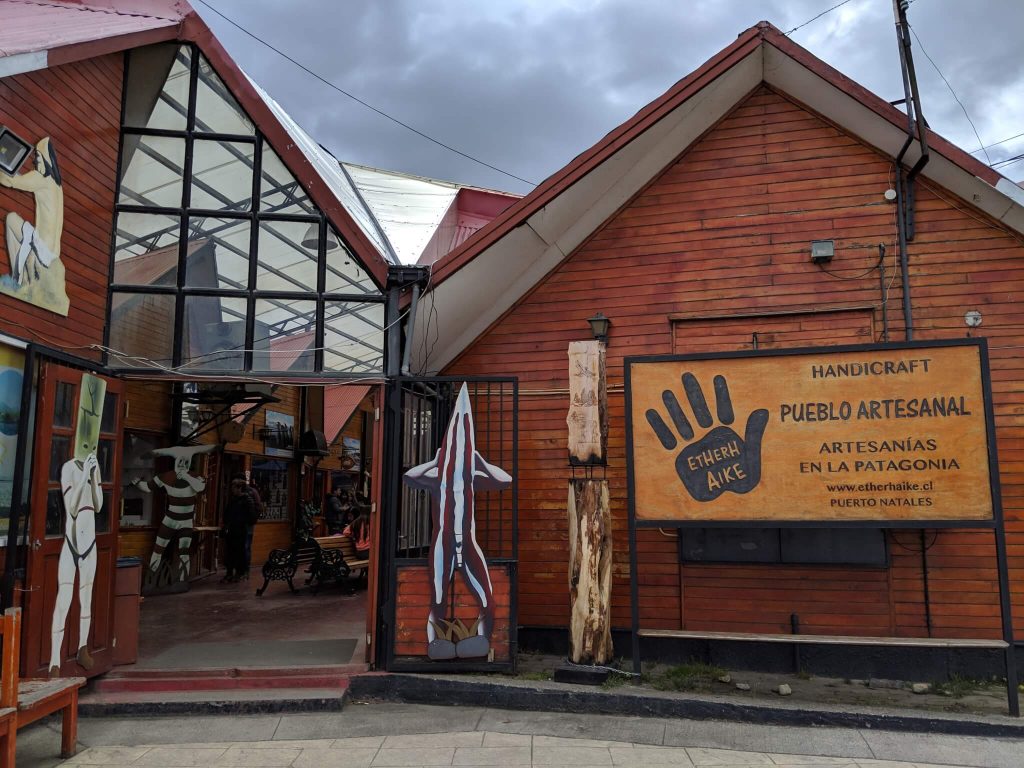 I ducked into the Artesanal Market to buy a darling alpaca-fur hat for my freezing head. Puerto Natalas’ summer is colder than I thought it would be!

A Cemetery with a Patagonia View 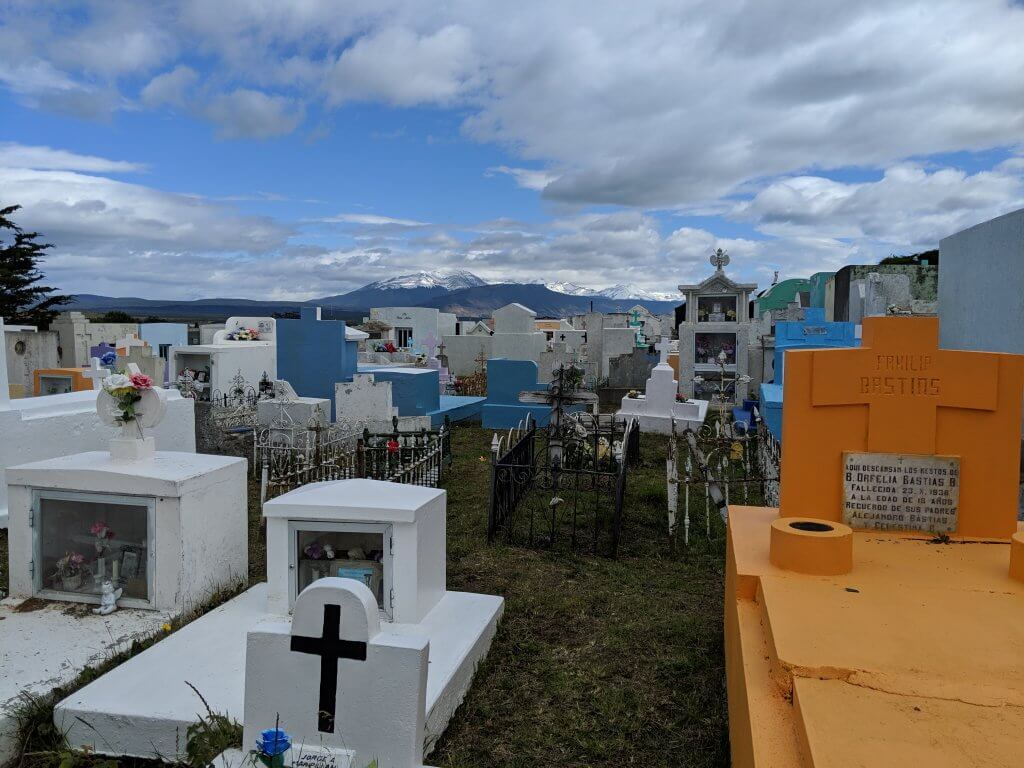 My favorite stop on our walk was the next one. I have been to many cemeteries throughout the world, and I found the one here in Puerto Natalas almost charming. With brightly colored tombs, I couldn’t resist capturing the colors of the tombs contrasted against the amazing backdrop of the Patagonia mountain range. What a great eternal view! 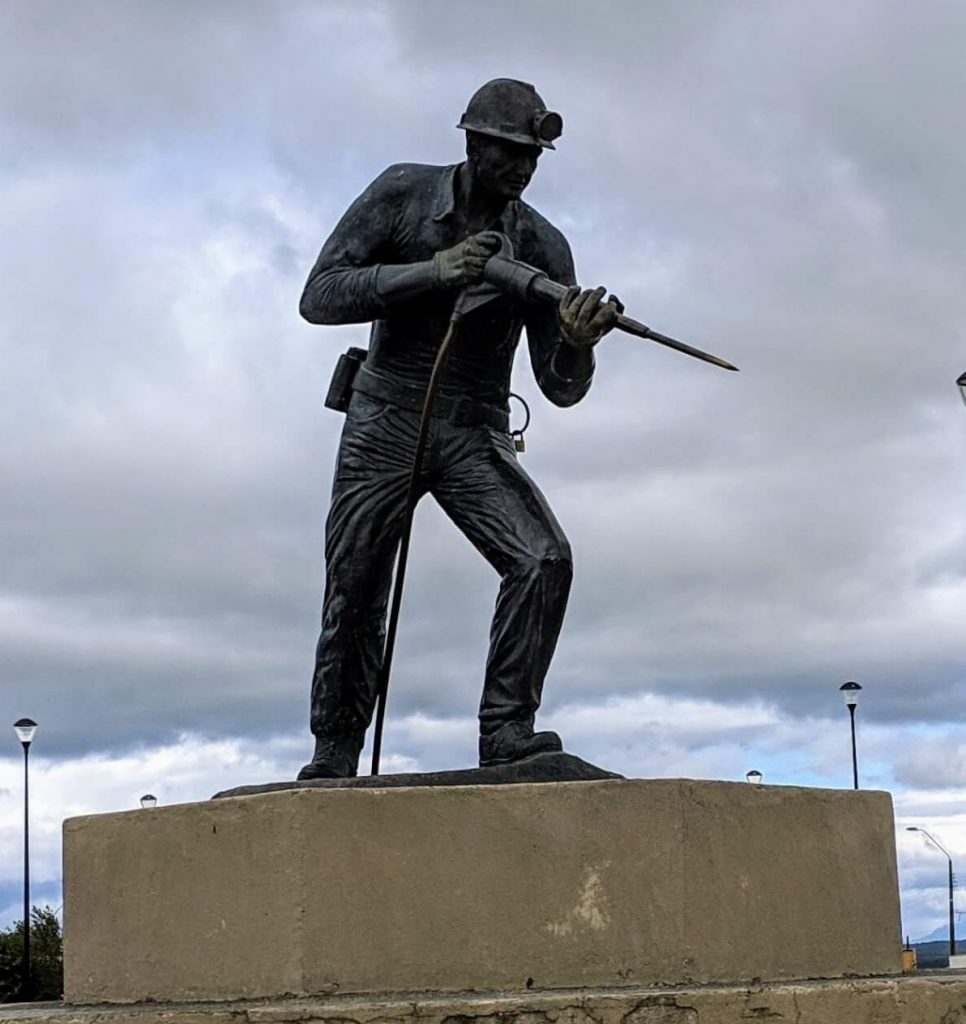 Thinking that Puerto Natalas grew due to exploration and navigation, imagine my surprise when we stumbled upon the Monumiento al Minero! Coal miners! Of course it made sense when we thought about it; yes, mountains are often loaded with coal, so why wouldn’t Puerto Natalas be full of miners? Constructed by Antonio Rodríguez and Daniel Cordero and inaugurated in 2012, the monument reminds viewers of the wax and wane history of coal mining in Patagonia. First, coal-fueled ships and finally coal fueled the economic vitality of Puerto Natalas through the 1940s. 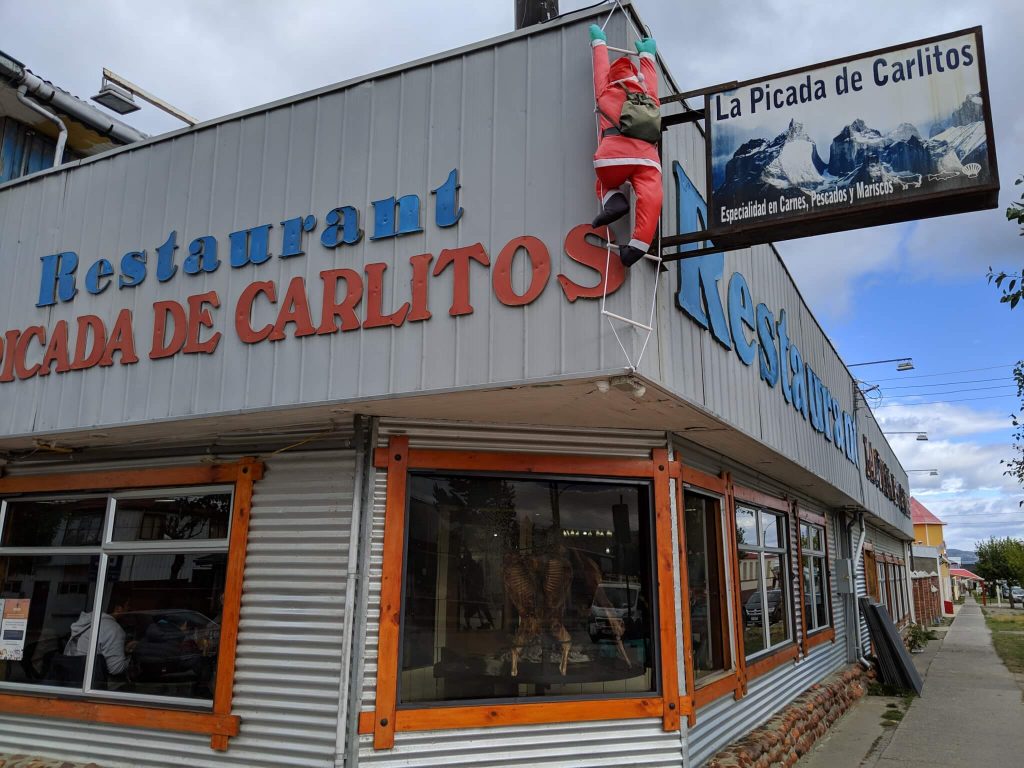 Feeling hungry, we headed back into town, stopping through Plaza Bernardo O’Higgins. O’Higgins, one of Chile’s founding fathers, lead the independence revolution against Spain. Like the Plaza de Armas, many towns have an ode to O’Higgins! In the Plaza, we asked a local for where to get the traditional Curanto, a meat dish cooked underground. He sent us to the nearby La Picada de Carlitos. 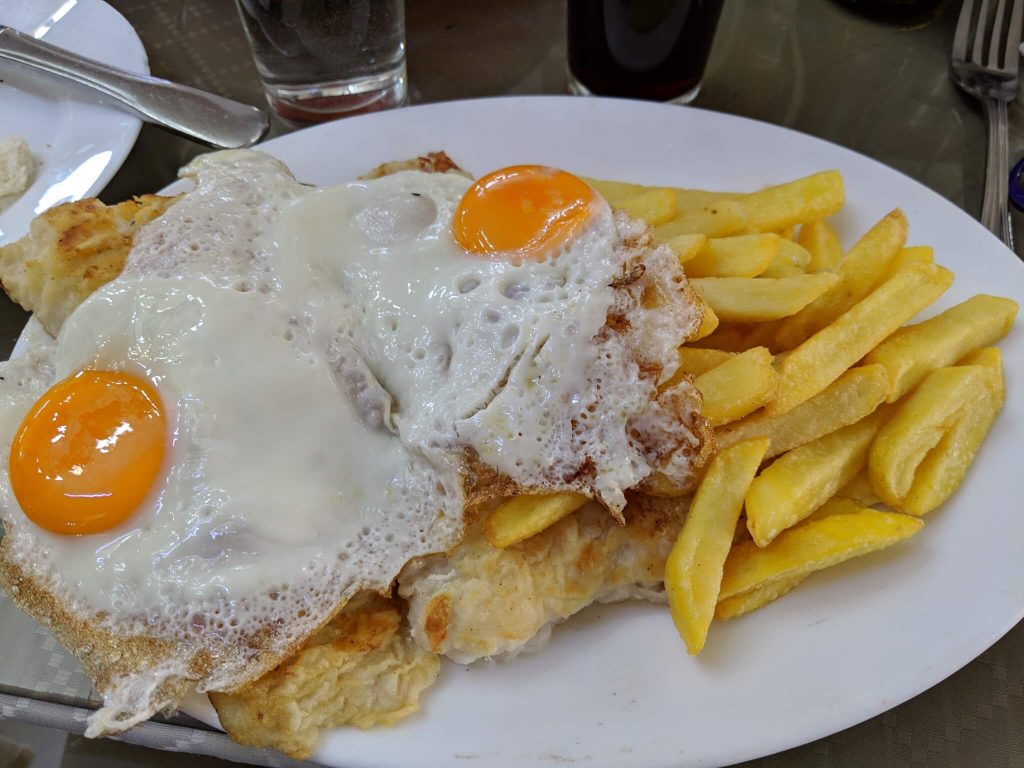 Sadly, this fabulous family restaurant did not have curanto; it was out of season. Instead, I enjoyed a yummy plate of eel layered over French fries and topped with fried eggs, chased by a Chilean beer called Cerveza Austral. 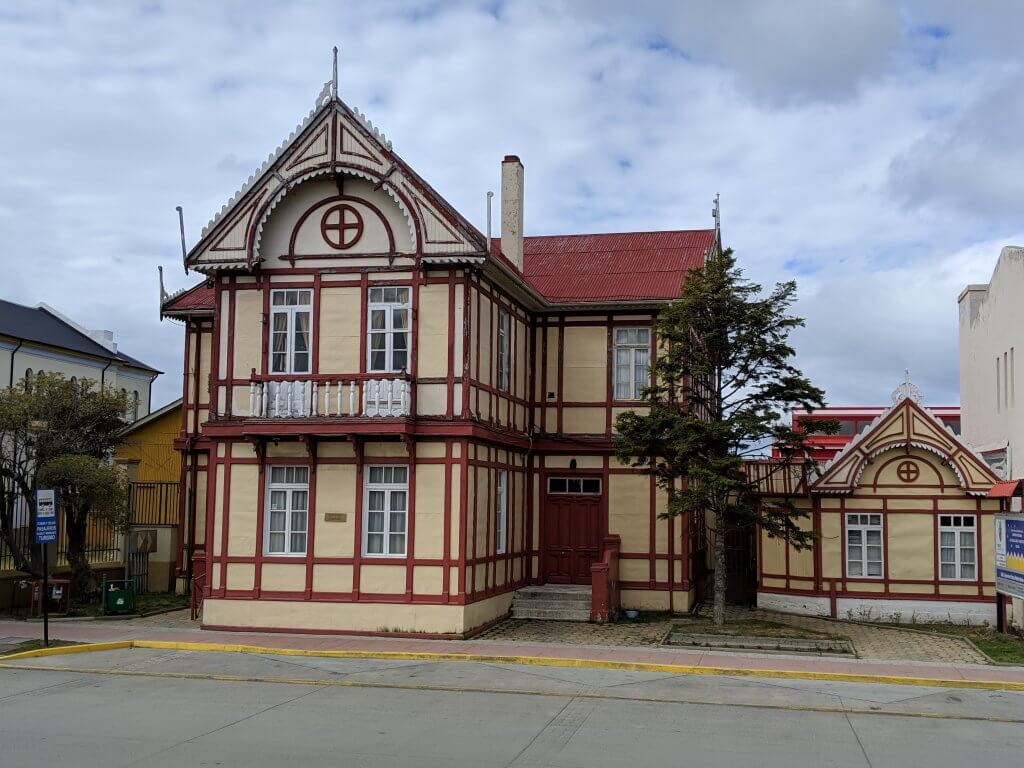 With full bellies, we gave each other hugs and said good-bye to a quickly made friendship. I took my tired knees to a coffee shop to snuggle up on a couch with a cuppa, and awaited for my friends to return from their amazing 15-mile hike through Patagonia to the Torres del Paine. I was sad I didn’t get to go, but I was thrilled I enjoyed a great time walking through Puerto Natalas.

What will you discover if you take a moment to enjoy Puerto Natalas?

Let me know on social media at @EatWalkLearn!