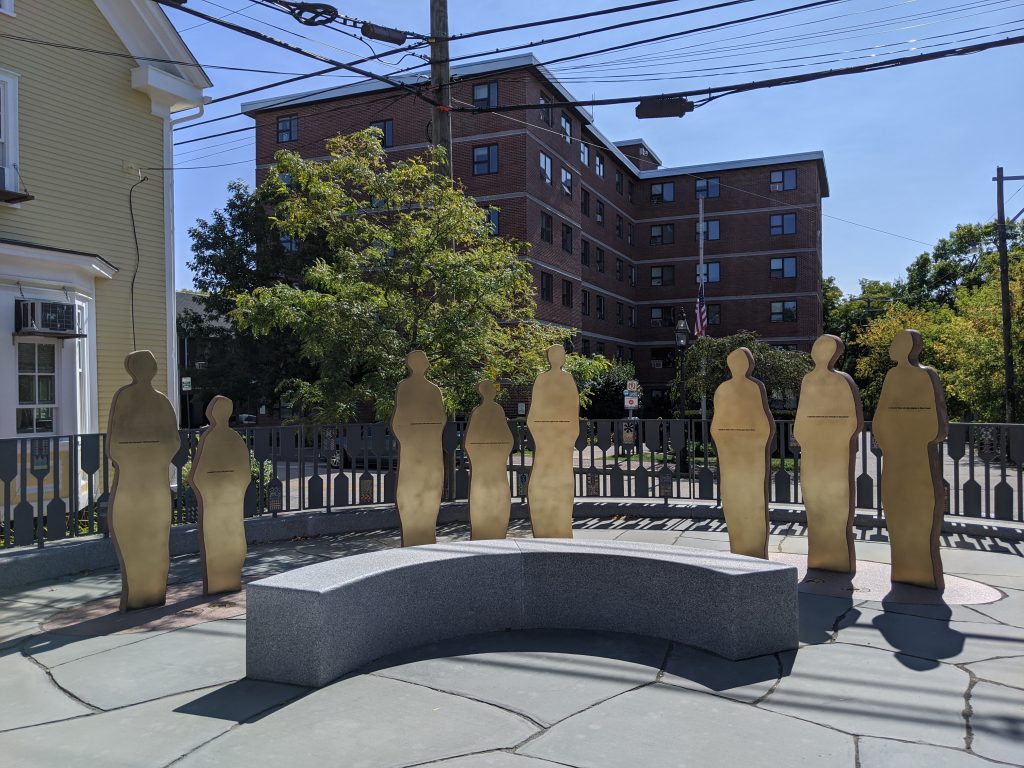 In a year where the world is changing, I’ve personally learned so much. It took the George Floyd shooting for me to wake up to so much I don’t know about US history. Despite loving it and excelling in it in school, I have large chunks of US history missing from my typical US-schooled curriculum.

Over time, I’ve tried to fill in the gaps by actively engaging in the interpretation at National Parks, reading essays, and watching historical pieces. I continued my education in US history this year by reading several books, including The New Jim Crow by Michelle Alexander, How to Be an Antiracist by Ibram X Kendi and White Fragility by Robin DiAngelo.

I’m not nearly done, only having scrubbed the surface of all that there is to learn.

So when we had extra time on the last day of our New England trip for our 50 Hikes 50 States Project to squeeze in an urban hike in Portsmouth, NH, I jumped at the chance.

Learning US History One Step at a Time

Immediately, I was gobsmacked by the realization that many of our historical buildings and local landmarks not only emphasize the white men they were named after, but they greatly ignore the people who helped build those locations and support their success. Despite Michelle Obama’s beautiful comment at the 2016 Democratic National Convention where she said, “I wake up every morning in a house that was built by slaves,” it never occurred to me that this white woman, me, should think about these things.

I encourage you to take 2-3 hours and walk the entire route, reading all the plaques, both those put up by the organization and those also put up by the Portsmouth Historical Society (and others.) Between the two sets of signs, you’ll have quite a variety of views to consider. 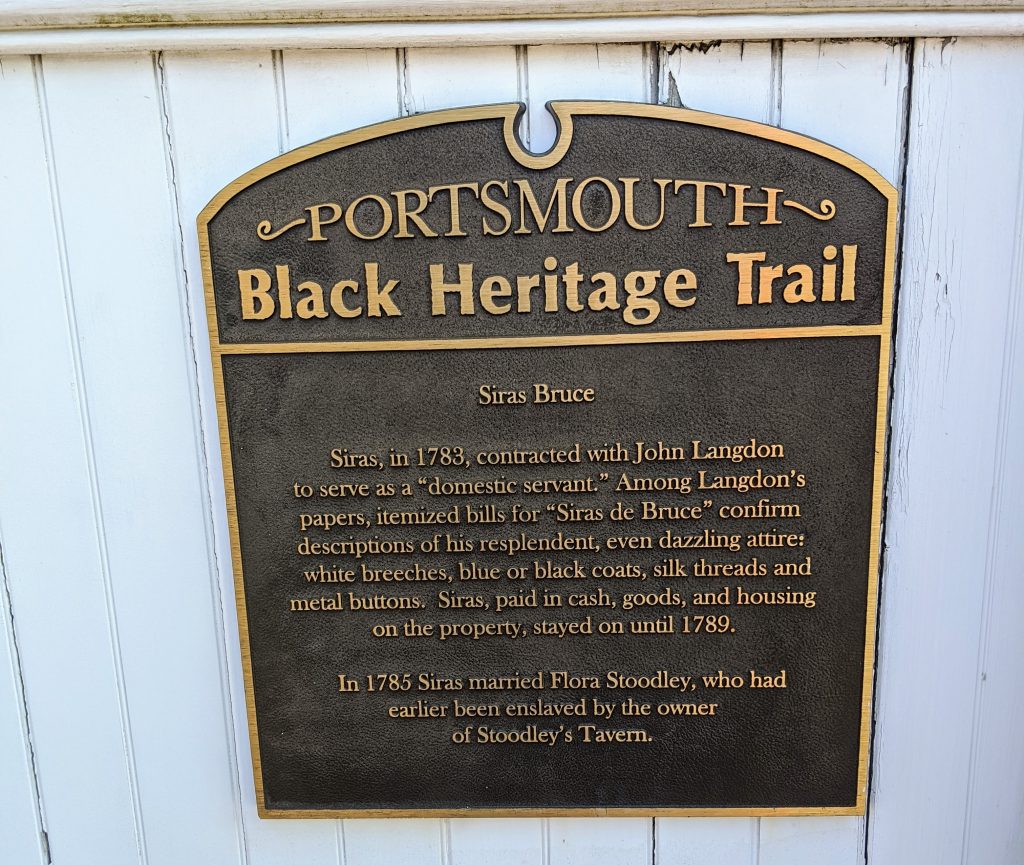 Our hike started at the Black Heritage Trail New Hampshire office (222 Court St) where we chatted with the staff about our plans, asking for recommendations to help manage the hour we had to explore. They have a small gift shop, maps, and books about the trail.

The first stop, right round the corner at 143 Pleasant Street, was the home of Governor John Langdon. Whereas Historic New England states:

A National Historic Landmark, Governor John Langdon House is an exceptional Georgian mansion which George Washington “esteemed the first” in Portsmouth. Its reception rooms are of a grand scale suited to ceremonial occasions and are ornamented by elaborate wood carving in the Rococo style.

While it continues to tell the waxing poetic story of Langon’s rise from merchant to New Hampshire’s Governor and influencer on national politics, the website’s information does not touch on how the African American community facilitated his rise. Fortunately, the Black Heritage Trail does point out the support of a member of its community in the sign above, telling us the story of Siras Bruce, who was quite the dazzler!

To the Center of Town 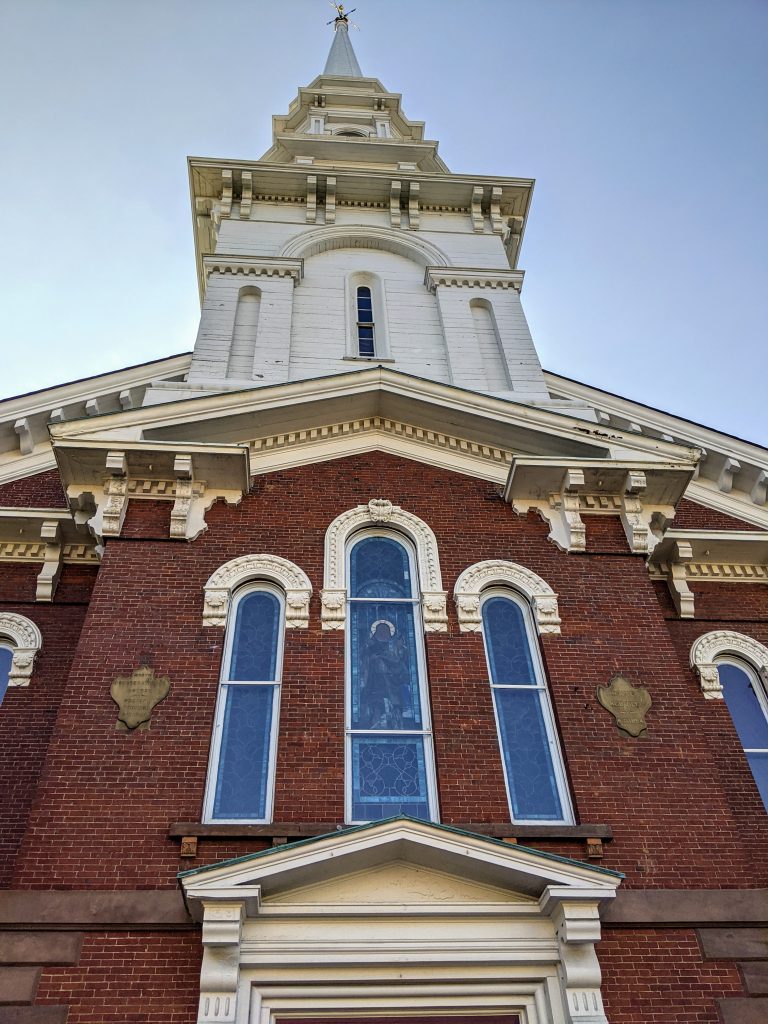 We continued along Congress Street to find the center of town between Church St and Pleasant St. On every corner, an historic building of significant value and quality graced the streets of Portsmouth, highlighting its important raise as a port town in New England. The North Church at Market Square, the Town Pumps and Stocks next to it, and the Meetings Rooms next to Tuscan Market held stories to share.

Whereas the church sits near the first New Hampshire State House where George Washington spoke and the Declaration of Independence was read, the church kept pews segregated for Negros or owners who insisted their slaves sat with them in their paid pews to flaunt their social status. 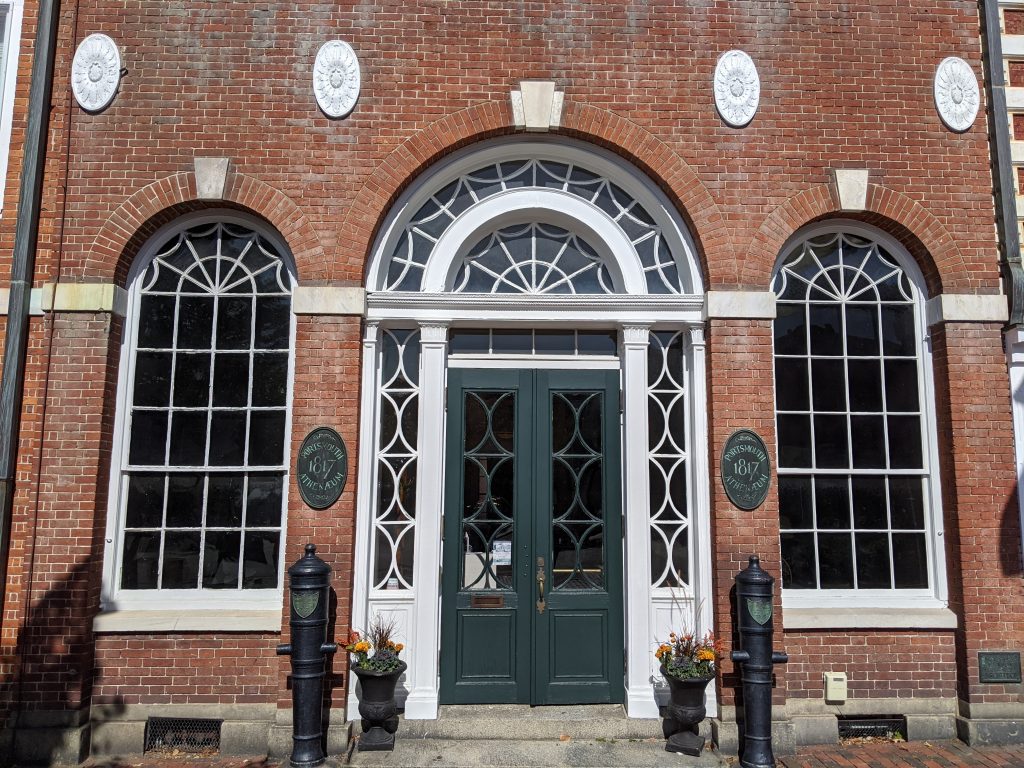 Across the street from the church, we found the Portsmouth Antheneum. Once a members-only library created for the elite of Portsmouth, this research center, open to all (but still you can buy a membership) houses over 40,000 volumes related to New Hampshire history. I wonder what sorts of ships’ manifests it might have listing the Africans who arrived in bondage?

Also near here at 171 Washington St was the Rosary Cooper house. A certified nurse, she operated a 20-ton crane at the Naval shipyard, while her husband Finnegan, served as a master sergeant in the US Army. She went on to certify as a beautician, and she and her husband boarded Black residents while she dressed hair for the Black community of Puddle Dock. After Finnegan’s death, Rosary went on to advocate for Veterans. 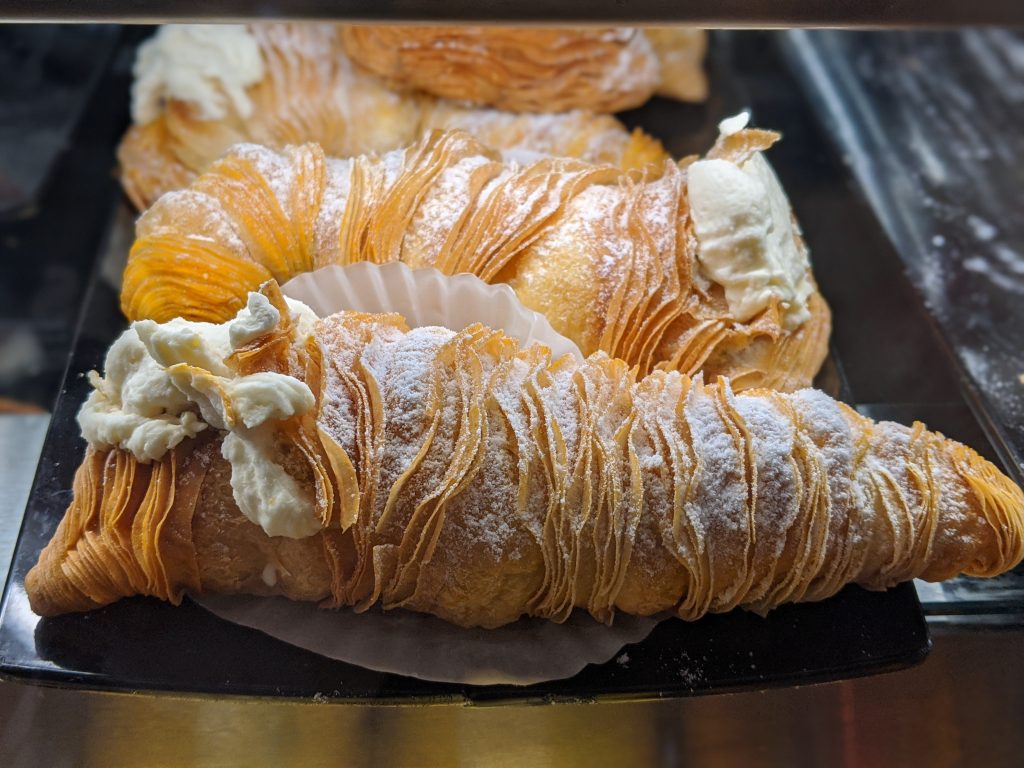 Before heading toward the waterfront, we stopped in the Tuscan Market. Filled with gorgeous Italian pastries, rich muffins, and breakfast sandwiches, we grabbed a bit and a latte. The outside seating invited us to sit for a moment while children ran chasing bubbles and enjoying the fresh marine air.

Sugar Fuels the Next Stop 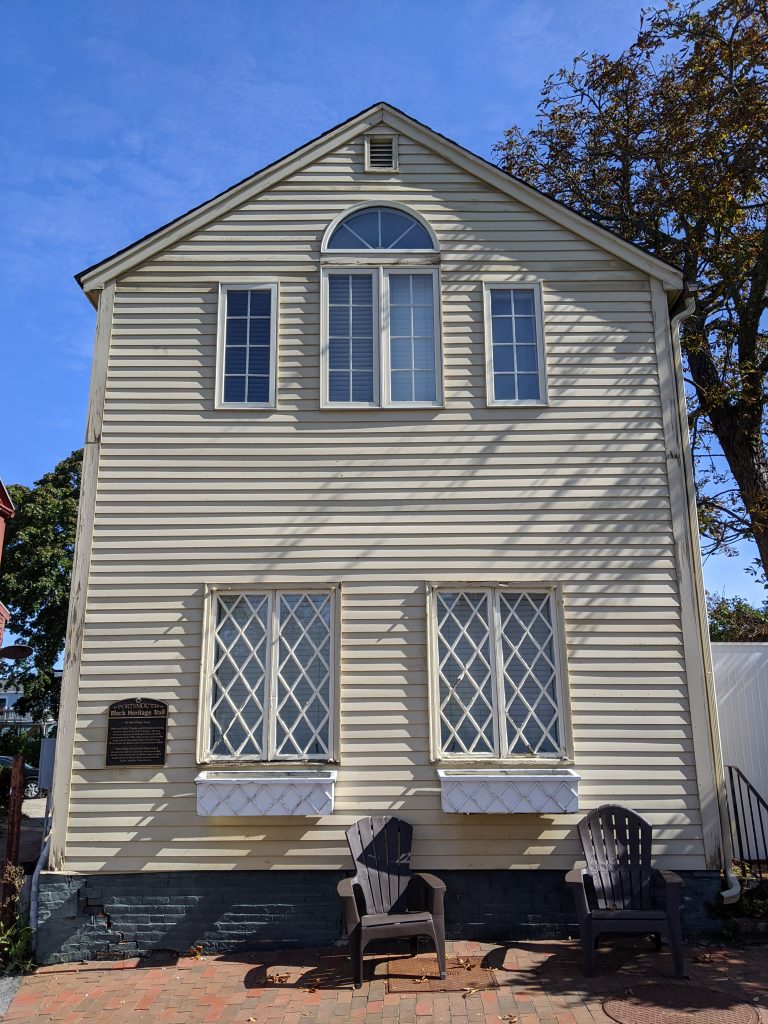 Filled with Italian goodness, we continued the walk down Market Street to Ceres St to get a peek at the waterfront and then to the Moffatt-Ladd house at 154 Market St. A famous chestnut tree marked a location when William Whipple returned from Philadelphia in 1776 after signing the Declaration of Independence. Gladly, though, we found a Black Heritage Trail sign telling the story of his slave, Prince. Prince accompanied the General and his wife through several Revolutionary War battles. He was freed in 1781, only after he and 20 other African Americans wrote eloquently to the Legislature to abolish slavery, a petition the Legislature tabled.

Around the corner from the Moffatt-Ladd house, we found the location of Prince Whipple and his family’s house. Given a plot of land to build a small wooden house, Prince, after his emancipation, worked as a steward, and his family members, Cuffee, Dinah and Rebecca worked as a musician, a seamstress, and a teacher, respectively. 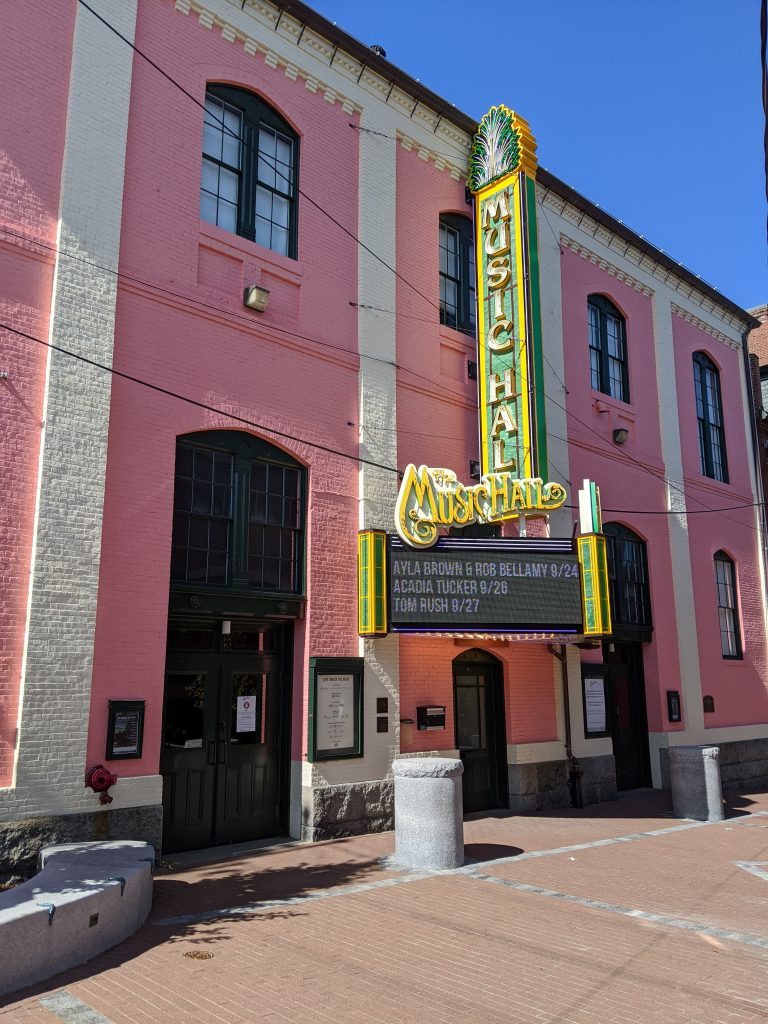 We rounded the corner and headed to the Music Hall on Chestnut Street at Congress St. Whereas the Music Hall’s history typifies many downtown musical theatres in the US, starting with Vaudeville and eventually becoming performing arts venues, next to the Music Hall stood the Temple. At this location, Black orators and abolitionists preached their message, leading to the passage of the 13th amendment.

We breezed past the Rockingham House at 401 State Street, briefly reading the history of how it was a rags to riches story of Frank Jones and barely missing the small Black Heritage plaque telling the tale of how director Louis deRochemont insisted Blacks be allowed onto the property. Ultimately his threats lead to better workers’ rights and the placement of an NAACP office.

Passing quickly though the John Paul Jones House at 43 Middle Street who was admiral of two Revolutionary War ships, and lived here as a boarder, we arrived at the highlight of the walk. 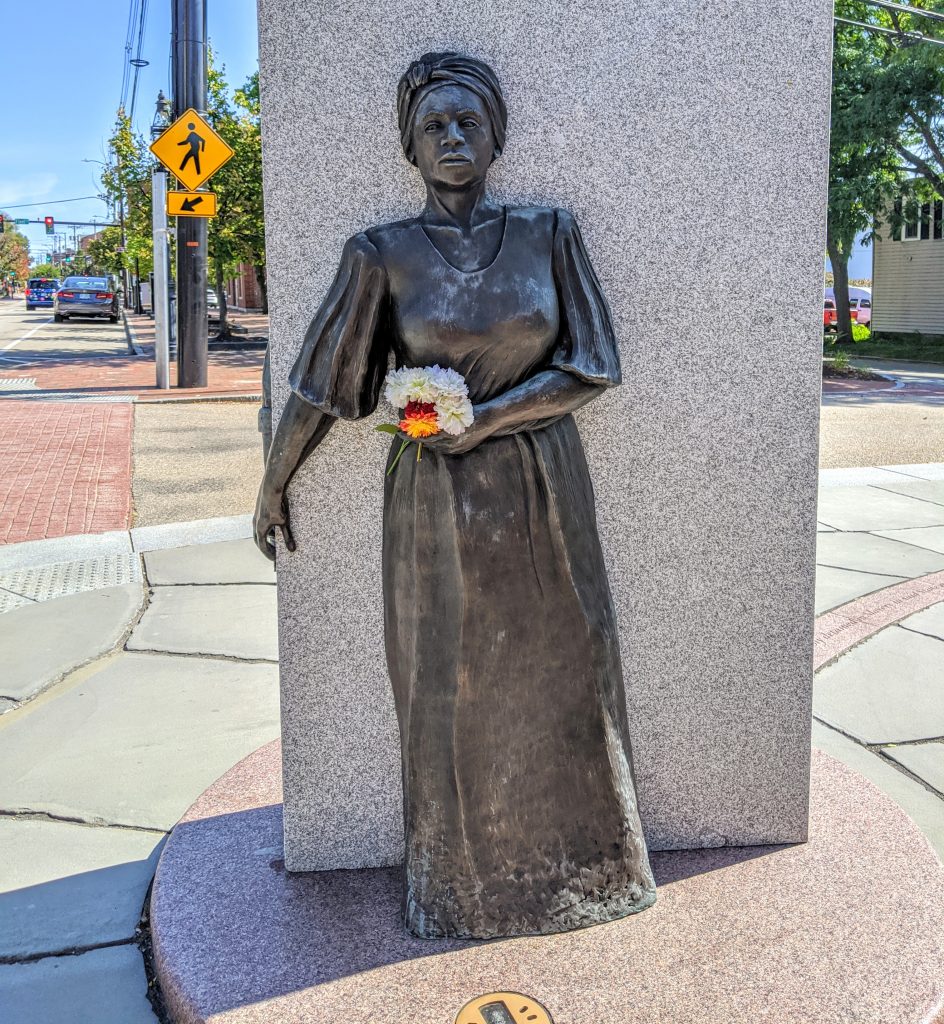 As our time came to an end, we rushed to the location that our friends at the Black Heritage Trail Office encouraged us to not miss. Here on Chestnut Street between Court and State Streets, we found what became known as the African Burying Ground. Originally known as the Negro Burial Ground, Portsmouth’s 1767 population counted 4% as slaves. Although slavery became abolished eventually in this northern town, it certainly contributed to the import of slaves. There may be as many as 200 people buried here.

A Stop at the Fire Station

We were out of time, and leaving for our flight couldn’t wait any longer. We barely scratched the surface of this amazing trail, only seeing about 25% of its monuments and bypassing many other historically relevant items in Portsmouth. On the way to our car, we did pass the Central Fire Station. 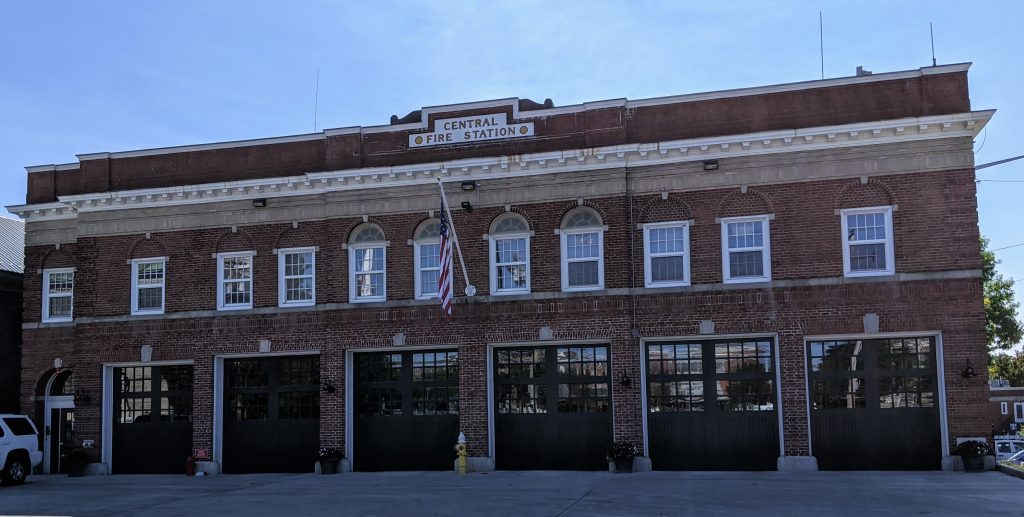 You can read a chronicle of the fires of Portsmouth, including how Portsmouth aided in fighting the great Boston fire of 1872. We enjoyed the sculpture, Vigilance by Emile Birch, placed in front of the fire house. 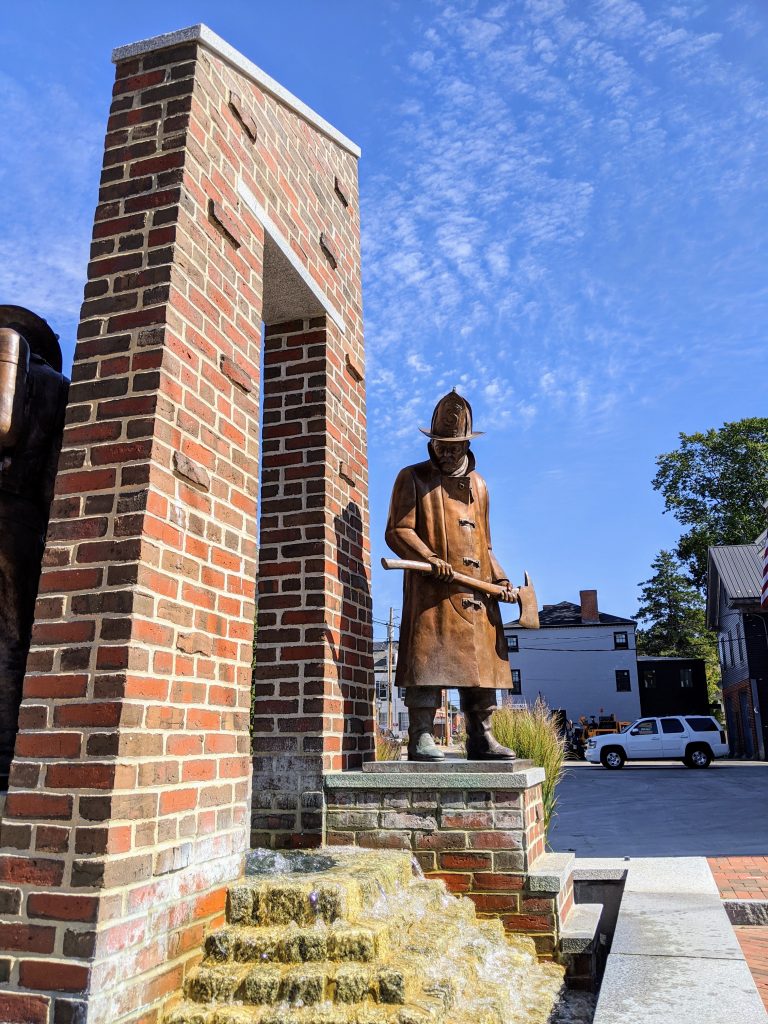 Unfortunately, we had to rush to the airport to catch our flight back to Denver. But I’m already eyeing a way to return to Portsmouth to finish an urban hike we barely started. Thanks to the Black Heritage Trail of New Hampshire for the impetus for our hike. We’ll be back.

For more hikes in New Hampshire and the surrounding area, check out these hikes:

Chris Englert, the Walking Traveler, has visited over 60 countries and all 50 states. Usually traveling with her husband, yet sometimes by herself as a solo traveler, she uncovers neighborhood walks, urban hikes, and vegan/vegetarian eats that other guide books miss.

We use cookies to ensure that we give you the best experience on our website. If you continue to use this site we will assume that you are happy with it.OkPrivacy policy