My First Long-Distance Road Trip in a Tesla Model 3 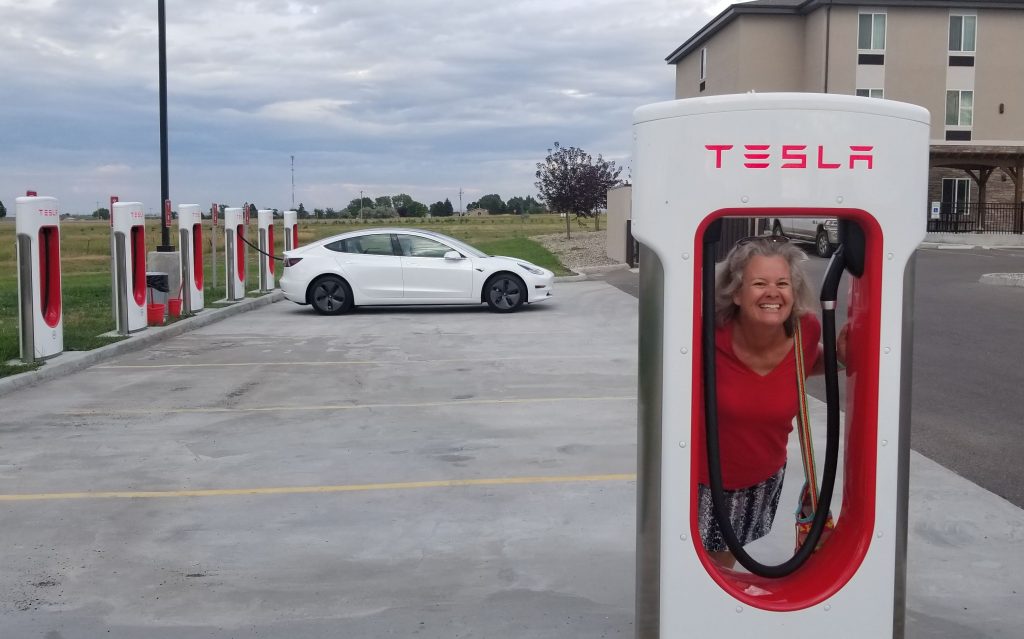 We Head to Montana 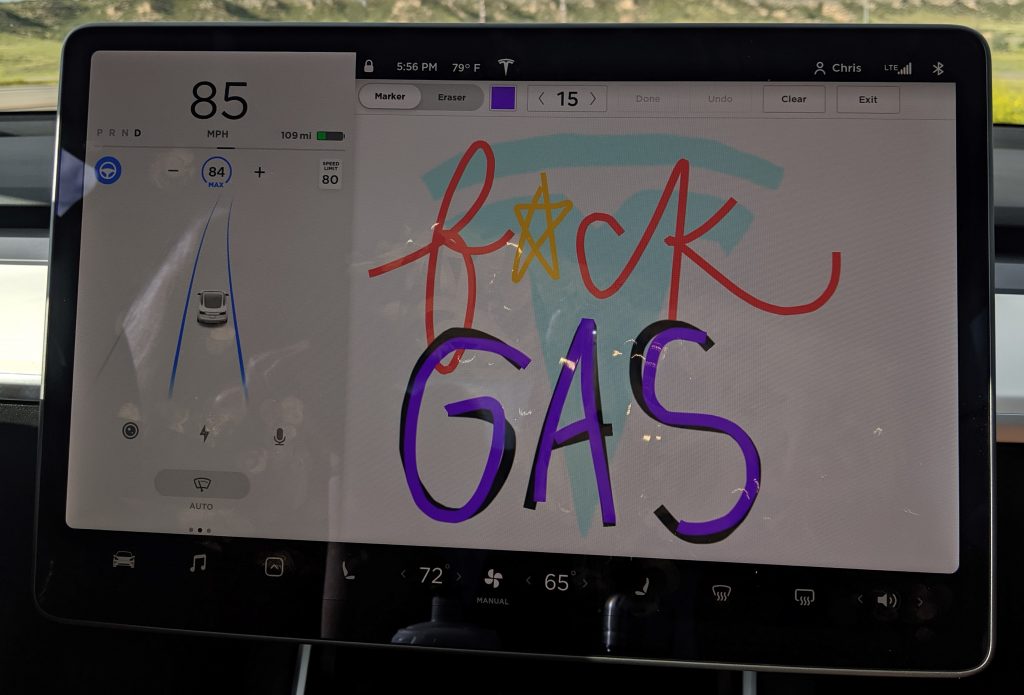 My daughter got to ride shotgun and took to doing some doodling.

We had a trip already scheduled for our 50 Hikes 50 States Project to Montana and Wyoming where we had prepaid our hotels. The logistics for the trip revolved around driving the Rav4. But our Tesla came in earlier than expected; I purchased the Model 3 with the long-range battery. At full 100% battery charge, we can travel 310 miles. So I set the battery to full charge and off we went on the previously determined Rav4 itinerary.

We started our trip at 3 pm on a Thursday to arrive at our pre-purchased hotel room in Casper, WY. In the Rav4, we would have driven until we needed gas, perhaps stopping for dinner at the same time (or not), and arriving at the hotel with no concern for whether the gas tank were full, empty, or somewhere in between.

See the table below which reflects some assumptions about how the trip would have gone in the Rav4 versus how it did go in the Tesla.

In addition, we had to consider the breaks along the entire route, not just the day’s itinerary. It took some thinking. Fortunately, the Tesla did much of the thinking for us. We’d punch in the day’s destination, it would calculate the miles and the range, and Tesla would tell us where we needed to stop to use a Supercharger so we would make it to our destination. 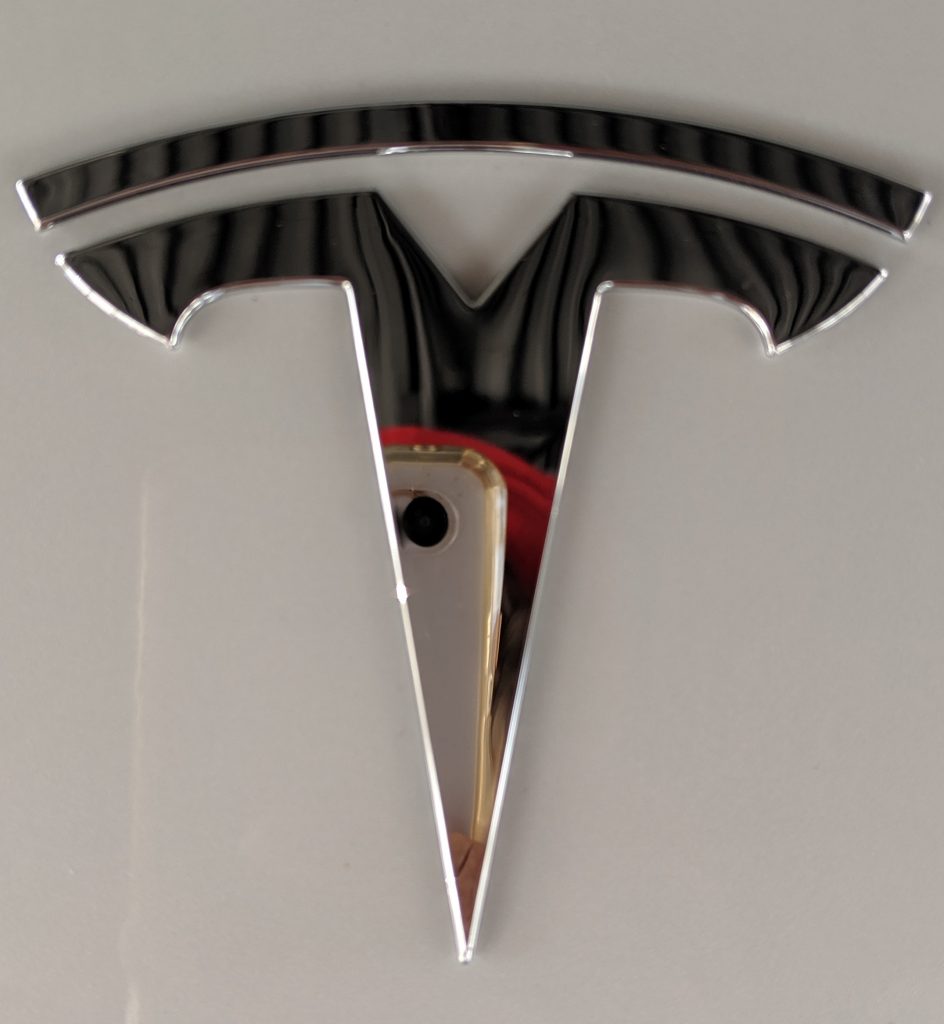 Tesla will point us to Superchargers first. Then to Destination Chargers. And ignore non-Tesla options.

The Tesla routing map took us off the route we originally designed (and had non-refundable hotels), so we had to look for ChargePoint and EVGo options in order to make it to our hotels. Next time, I’ll be sure to look at the Tesla routing first before I book hotels!

Not All Chargers Are the Same

Let me throw in some charger definitions:

Supercharger: A Tesla-owned and branded charger. These are strategically placed along Tesla’s charging network, have proprietary technology, and can “fill up” a Tesla in about 45 minutes. The cost varies and is billed directly to the Tesla owner’s Tesla account. A fill-up costs around $10. They can only be used with Teslas.

Tesla Destination Chargers: Also Tesla-branded, these chargers are slower than Superchargers and are often found at hotels and are often reserved for hotel guests. To fill up takes about 4-5 hours and the hotel usually pays the charging bill. They also have Telsa proprietary technology and can only be used with Teslas.

Non-Tesla Chargers: There are several networks of electric vehicle chargers. ChargePoint and EVGo are two major ones. They often have two types of chargers; ones that charge at about the same speed as the Superchargers. (Nissan Leafs love these, but Teslas can’t use them.) These stations often have slower chargers that most all electric vehicles can use, and they take about 4-8 hours to fill up a Tesla. Tesla provides a converter to attach to these power plugs. Costs vary by time and by charger type.

I didn’t know much of the above until we headed out in the Tesla. Life in the Leaf had been simple; charge where Tesla isn’t. I spent lots of time at ChargePoint and Nissan Dealer chargers in my previous EV life. But I never traveled long distances so I never had to plan out a long-distance road trip.

We Modify the Route

We punched Billings, MT, into the Tesla navigation map, and immediately, I started seeing the error of my pre-planned ways. Instead of routing us to Casper, Tesla wanted us to go through Gillette where we’d find a Supercharger. But since we had prepaid our hotel, we had to go to Casper. We’d have to do an extra charge in Casper to ensure we’d make it to Billings.

None the less, we left Denver, put the car in the amazing and wonderful Autopilot, and casually relaxed our way out of the Denver traffic and into high-speed travel. Soon, we arrived at the first place to charge, Wheatland, WY. 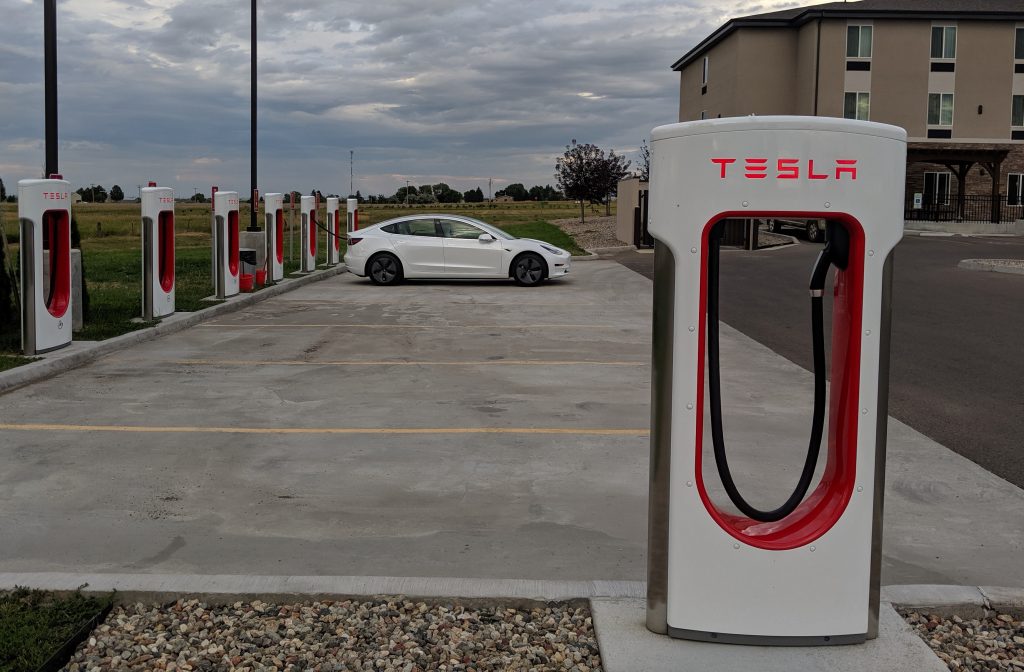 I don’t think I’ll be back any time soon.

But at least it was a place to grab a bite, charge up, and get us to Casper.

In Casper, we learned the hotel secret of Destination Chargers. We discovered that the Hilton Garden Inn had several chargers we could use, but we had to be guests. Our hotel, where we were guests, was two miles away. Being long-time Elite Status members at Hilton, we figured we’d been customers many times elsewhere and felt ethically that it was okay to use the destination chargers.

We plugged our car in and walked to our hotel for the night. It would need a six-hour charge. In the morning, we walked back, picked up the car, thanked Hilton, had some great breakfast grub at Eggington’s, and sped off to our next stop, Sheridan, WY.

Note to self: plan overnights at hotels with chargers. And, another note to self: The Tesla makes me walk more (that’s a good thing.)

If we had been in the Rav4, we probably wouldn’t have stopped in Sheridan. But we weren’t 100% confident in Tesla’s prediction of its range and we were wanting a cuppa, so we made the stop.

We had a blast in Sheridan. The Superchargers were conveniently placed in the middle of downtown. While charging, we wandered the main street, stopping in the roping museum (don’t miss it!), and grabbing a delicious chai at Bison Union. My daughter loved several of the vintage shops. Our 45 minutes zipped by.

Note to self: whereas in the Rav4, we would have zipped by Sheridan. We loved the stop and realized that Tesla vacationing isn’t about getting from A to B, it’s about enjoying the route along the way. 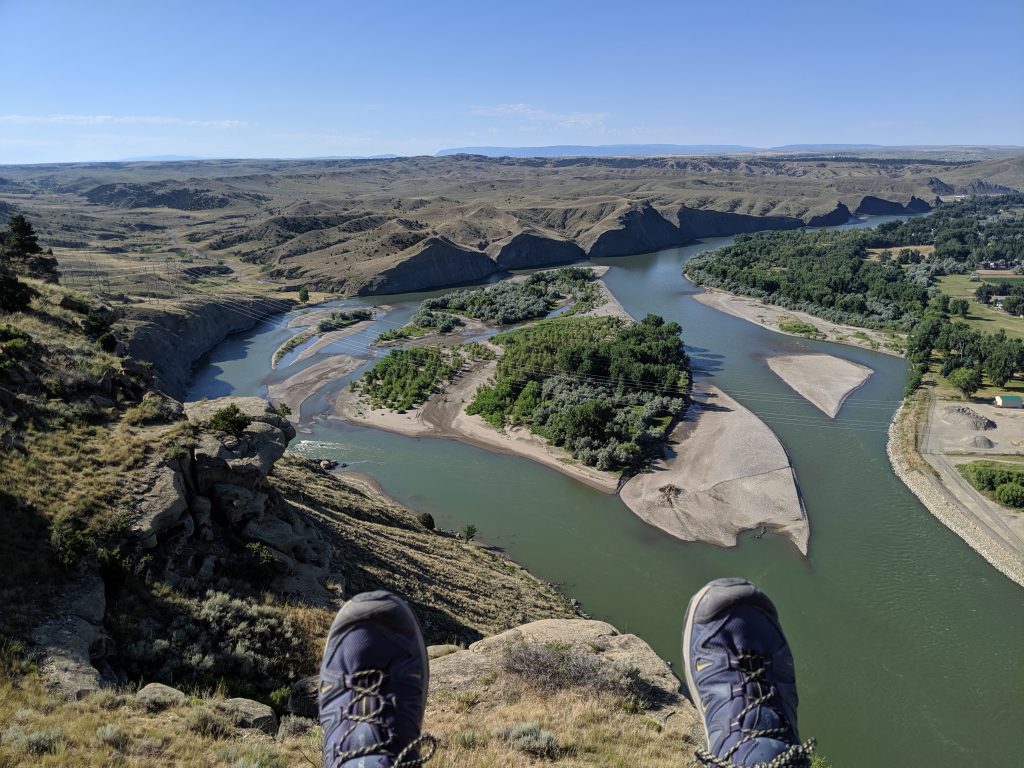 In the late afternoon, we rolled into Billings and spent the next two days enjoying the hikes and sites of this riverside town. We also checked off Montana for our 50 Hikes 50 States Project by hiking Four Dances. On Sunday, we charged at the Billings SuperCharger and pointed the Tesla to Lander, WY.

More Miles in the Tesla

If we had been in the Rav4, we would have taken the shorter route directly there through Greybull of 267 miles. I didn’t feel comfortable arriving Lander with less than 5% charge left on the battery. So we took the longer route (368 miles) by going back through Sheridan. This made my daughter happy, as there were a few stores she’d missed in Sheridan. Thus, we stopped in Sheridan again, charged, and ate a cowboy-sized breakfast at the Silver Spur Cafe. 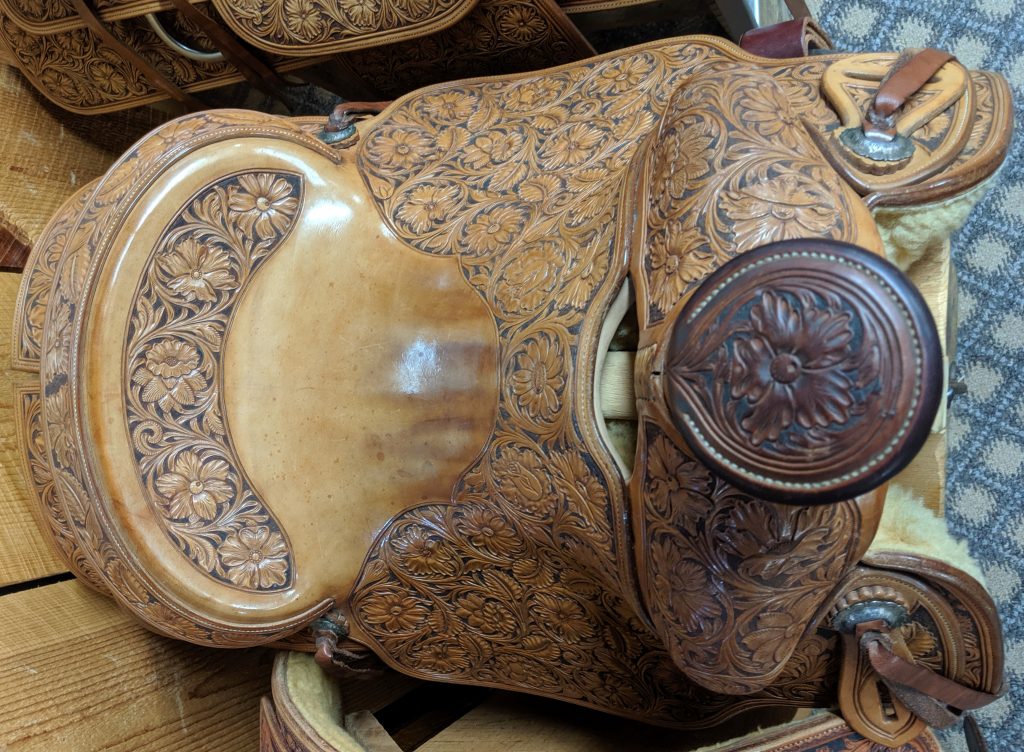 Lander exists to provide access to Yellowstone National Park (see my tips on how to avoid the crowds at Yellowstone.) Prior to arriving, I had been a bit worried about the charger in Lander. It showed up on ChargePoint as a J1772 (a slower charger.) Fortunately, I had called ahead, and the local who answered assured me the charger worked and was readily available. We arrived to our pre-paid hotel on Sunday afternoon; Lander was a modern-day ghost town.

Luckily, our hotel was coincidentally next door to the charger. We found it in the rear lot of a sandwich place. It looked much different than any charger I had ever used now or in my Leaf time. It had a credit card charger that I immediately wondered if there was a skimmer on it. Attached to it was a power cord that was twisted like a spring. Attached to that was a typical plug. Skeptical as all get out, but with no other choices in town and only 25 miles left on the battery, we were a bit desperate.

I pulled out my Tesla adapter. It attached and worked perfectly. For whatever reason, my credit card wouldn’t register a swipe on their machine. My husband tried his, and voila, everything worked. My Tesla’s blue charging light started blinking, turned green, and a charge began.

Then we looked at our interior screen of the car. It was going to take about 8 hours to charge at $5 an hour. $40 for a fill up! We quickly did some arithmetic.

How Much Charge Did We Really Need?

Our next destination was South Pass City, WY to hike for our 50 Hikes 50 States Project. The closest Supercharger was in Laramie. We did some math just like we’d do if we had rolled into a gas station where the price per gallon is out of the norm. (Think the gas station at the exit to Moab where they charge a good $2 more per gallon!) We would need about 175 miles to complete our trip to South Pass City and get us to Laramie. Thus, we wouldn’t need a full charge. We could charge for about 4 hours, pay $20, and get 200 miles of charge. So we left the car, walked around town, got some pizza, chilled out in the hotel, then picked up our Telsa, and stayed the night. 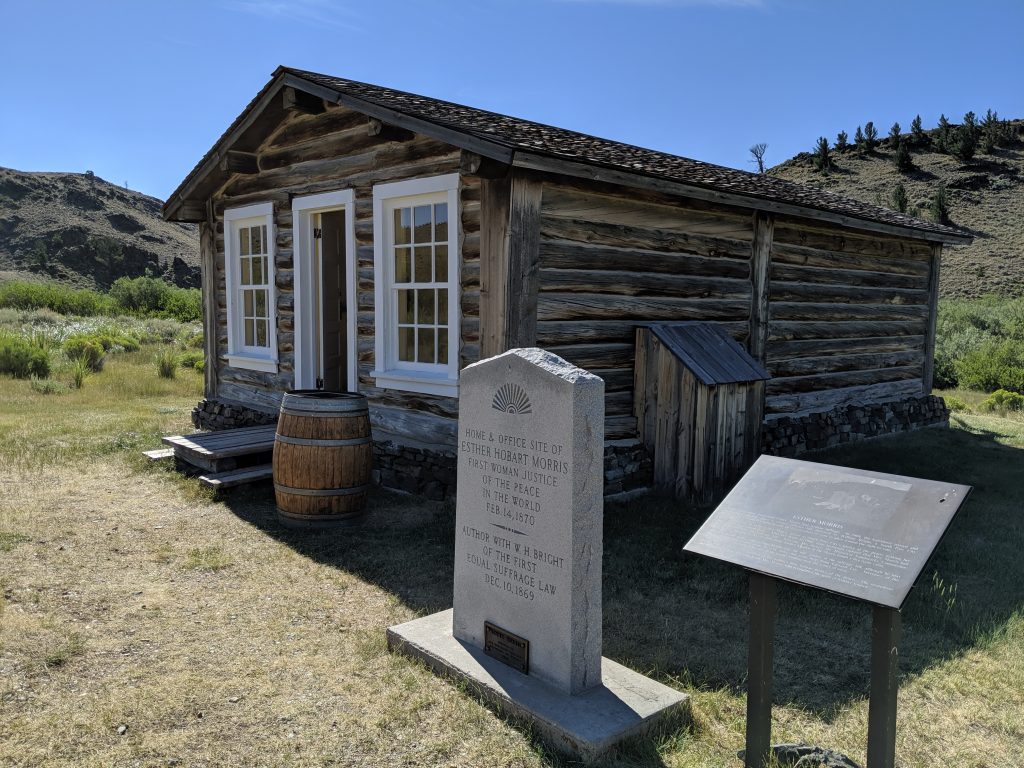 Rested, we grabbed our Tesla, now named Journey, and zipped over hill and dale to South Pass City, WY. If you haven’t been to South Pass City, make sure you put it on your must-do list. It’s a super stop in/out of Yellowstone and well worth the time. The state of Wyoming has created a state park out of a ghost town, providing a network of trails to enjoy the culture and history of the gold rush. Bonus: you’ll visit the first place that suffrage passed and where women could first vote in the U.S.

And On to Laramie

Next stop: Laramie, WY. Journey scooted her way easily to Laramie. We were a bit anxious that we had calculated our mileage correctly in Lander, so we found ourselves constantly checking the energy consumption graphs on the car’s display. Tesla was a bit worried as well and started recommending that we manage our speed and not exceed 70 mph.

Being on a straight road where we could see infinitely, it was painful to not drive super fast and pass everyone we wanted. But wanting to arrive in Laramie exceeded our desire to see how fast Journey could go, and we obeyed Tesla’s recommendations so that we could get there. We did. With 20 miles to spare.

A quick Supercharge in Laramie with a bite at Subway put us back on the road. The last leg to Denver invited us to again use the fabulous Autopilot in traffic. We arrived home safely and with plenty of charge.

Comparing a road trip in a Rav4 to a Tesla Model 3, we definitely had unexpected consequences of our trip.

My daughter hasn’t learned to drive yet; it will happen shortly. I like to think I’m raising the first generation of people who will never drive a gas-fueled vehicle. I’m feeling good about the future.

See ya at a charger! 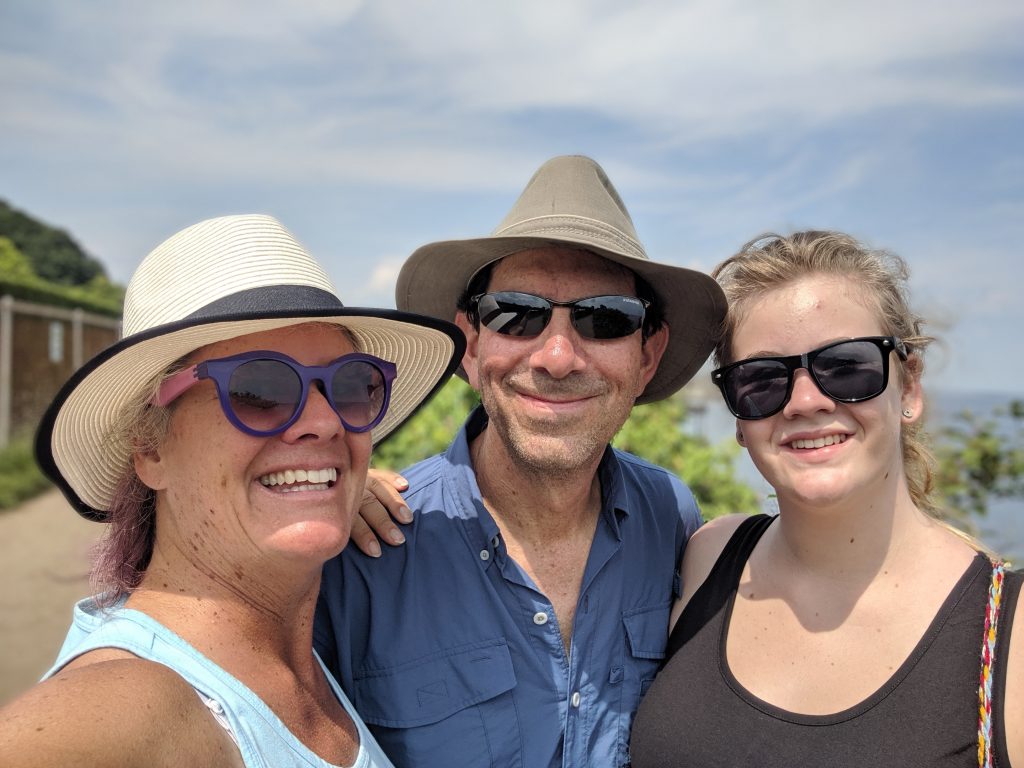