Jack Kerouac, Neal Cassady, and the Beat Generation in Denver

Jack was here.
And so were Neal Cassady and Allen Ginsberg. 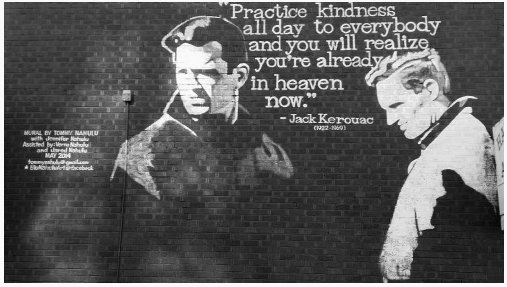 Who were these crazy cats? They were the author-leaders of the Beat Generation, a group of writers in a period of time when the United States transitioned through World War II and into the hopping ’50s. The Beats challenged our perceptions of wealth and living, cultivating the edge of society to survive and thrive in a music-influenced, drug-experimenting, getting-by adventure of life.

They couldn’t avoid Denver even if they tried.

Denver played bosom to Jack Kerouac’s love affair with the road, housing him various times as he dropped in to jive with his buddies, Neal Cassady and Allen Ginsberg.

On the other hand, Cassady continuously tried to escape the sharp Larimer edge of Denver that had cut his soul, fleeing to San Fransisco and New York, only to be dragged, or perhaps drug, back to his hometown by way of Kerouac’s persistent love for the mountains and be-bop vibe of Five Points.

Ginsberg wove through Denver like a ribbon on beated time, reflecting Denver onto Cassady in ways that never let Cassady shed his hometown roots.

Writes Ginsberg in _Howl_ about Cassady,

“who journeyed to Denver, who died in Denver, who came back to Denver & waited in vain, who watched over Denver & brooded and loned in Denver and finally went away to find out the Time, & now Denver is lonesome for her heroes…”

Denver’s beat honed their visions of life, and collectively, these boys left their marks all over Denver. In Curtis Park, Five Points, Denargo, Globeville, Larimer, Lakewood, and even Central City, you can find their old haunts, unpaid bills, and even the place that baptized Cassady.

Come join EatWalkLearn on a tour of the Beat’s bumps in Denver on March 5. Be sure to wear your best Beat Wear. If you need inspiration, take a look here. Sign up here. If possible, please read at least one of the book below before the walk. On the walk, you’ll learn more about Jack Kerouac, the Beats and Denver.

On the Road by Jack Kerouac

What books do you recommend about the Beat Generation? Post them here!