Our First Day in Budapest 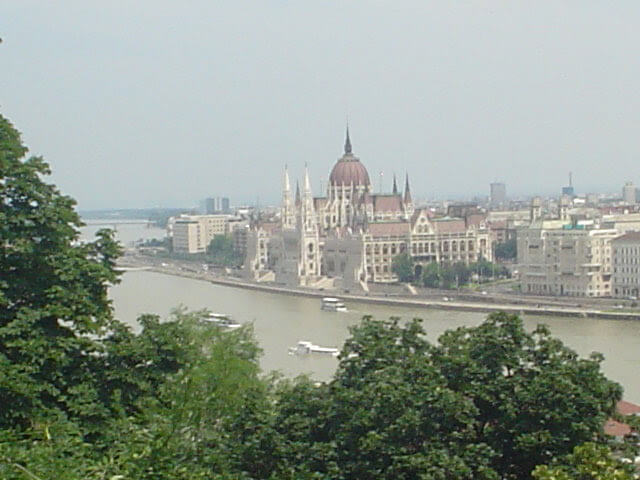 We began our week-long, summer jaunt through Europe. Four countries in seven days. How would we spend our time the best? With our first stop in Budapest, what secrets tips could we unveil in this old city of Budapest for a 24 hour adventure?

Flying from Detroit, our flight routed through Amsterdam to Budapest. The last leg timed for a bit more than an hour, long enough for me to read the inflight magazine of Hungarian Air. What did I discover? Our first secret tip; always read the inflight magazines. Despite reading all the travel books and websites about Budapest, the in-flight magazine dished on one thing I could not pass up…Rod Stewart, Live, In Concert at Hero’s Square and for Free, two hours after we arrived!

Thinking that there was no possible way we could see a Rod Stewart concert for free, we still landed, got the local 411 on the Budapest metro, and made it to Marriott Budapest. Travel and Leisure ranked this hotel as a Top 10 in Europe. Well, hum…the room was a typical Marriott room…and the concierge was a typical concierge. So, yes, we did use their services, but I wouldn’t put this hotel in a Top 10 list. It was lovely though and well-placed for our Budapest tour. Nicely situated overlooking the Danube, the romance for our trip was set.

The concierge confirmed the free Rod Stewart concert–we’d be with our 300,000 closest Hungarians in the outdoors. Super! Off we went. We arrived at Hero’s Square and heard some of the worst covers of old American songs we’d heard since high school. It was only 7 pm, and Rod was due to come on at 9. What to do? Well, right around the corner was the Kiraly Bathhouse, a traditional Hungarian bath. Why not?

A Dip in the Hungarian Bath

We entered the bath not quite sure what to expect. A long, complicated price list greeted us, and we discovered secret tip number two. Visit Bath Houses late in the day. Unfortunately, due to the late hour of the day, most of the items weren’t available–I was glad because I don’t think I could have navigated the entire list! The prices were cheaper and the visitors we fewer.

We didn’t have much cash on us, and they didn’t take credit cards. We chose the steam bath option with bathing suit. It cost about 10000 Budapest forint, which even now, I can’t pronounce the name of the money. We decided to call them Ruppies for lack of a better name! Anyhow, the 10000 Ruppies included a deposit on the utilitarian, any-color-as-long-as-its-black bathing suits that we could rent.

To the locker rooms we went. Steve made friends with the bathing suit lady, resulting in suits that fit us both. She was a hoot, and she thought we were just as fun. We then joined the fun in the baths. There were about ten different baths that we found, all of different temperatures and rituals. Regardless, it was about relaxing, people-watching, and wondering how the ancient mating rituals of Hungarians played out in the baths.

Spin Cycle at the Kiraly Bathhouse 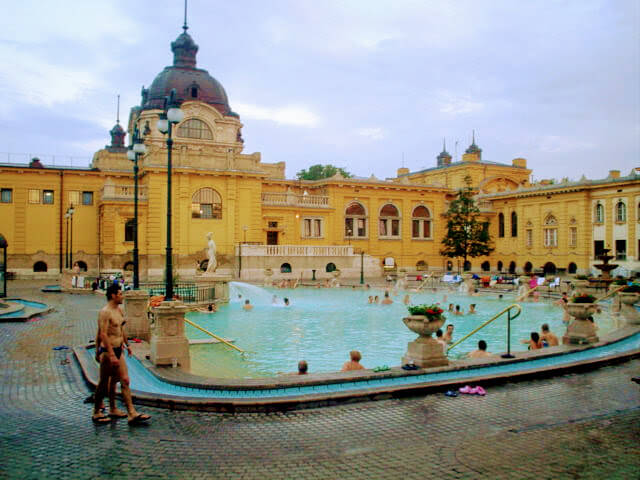 We stayed at Kiraly Bathhouse for about two hours, trying out all the baths, but the most fun was the whirlpool! The whirlpool was a round bath of about 28 degrees Celsius. You entered it, and then in a fast clockwise motion, it swished you around and around and then spit you out after 360 degrees. For adults only. We swished and laughed until we were dizzy in a spizzy. What a hoot! Then off to the showers we went, and without brushes for our dizzied hair, we went to see Rod Stewart.
How much fun was that! Rod crooned his top songs, we danced and sang at the top of our lungs, and secretly, I felt like I was teaching all of Hungary the lyrics to Rod’s songs. He played for almost two hours, we drank local beer, and enjoyed 300,000 of our closest Hungarians friends. Then off to bed we went–tired, worn out, and with smiles on our faces.

Prior to heading off to breakfast, we researched train prices, and discovered secret tip number three. We determined that we it would be cheaper and more flexible if we bought one-way tickets to our destinations rather than buying a Eurail pass. This paid off well. We purchased our tickets for Vienna, found out that round-trip was cheaper than one way, and Bonus! our tickets also served as public transportation passes in Vienna. Thus, we dumped the return part of the trip and saved on local transit within Vienna. Our train didn’t leave until later in the day, so we had another day to enjoy Budapest. But at breakfast, we had a fascinating conversation with an interesting couple.

Talk to the Locals, Really

We had grabbed a croissant and were enjoying a beautiful cafe. Next to us, we heard folks speaking English and struck up a conversation. We met a lovely Canadian couple. She was born in Budapest and still speaks a bit of Hungarian. For whatever reason, we began to talk about my husband’s last name (Goodfriend), and she informed us that his name was German, not Hungarian. Imagine that!
From breakfast, we took the funicular up to the National Gallery and enjoyed the beautiful masters. It’s quite humbling to look at art that is 400 years old hanging in a 200 year old building. How do you plan for that as a curator? But while enjoying the art, our thoughts swirled about the new discovery of Steve’s last name. Perhaps there were some clues to his genealogy in the local cemetery.

The Jewish Cemetery in Budapest

We decided to visit the Jewish cemetery in Budapest. According to the ship’s manifest that Steve has which shows the emigration of his great-granddad, his family is from Hungary and his last name was Gutfreund. His name became anglicized when he arrived in the US to Goodfriend, but while in Hungary, it would have been the Hungarian word for Goodfriend, Barátok, according to our Canadian host at breakfast this morning. We wanted to visit the Budapest cemetery to see if we could find any family members with the name Gutfreund or Barátok. Off to the Jewish cemetery we went only to discover we arrived at the Christian cemetery. It was huge. Hundreds of florists decorated the streets on the way to the cemetery. People were everywhere.

Don’t Let the Language Intimidate You

We entered the cemetery, found a locator grid, and unfortunately, there was nothing that indicated how to find his family name or how to find the Jewish cemetery. A bit lost, we noticed a man watching us, the grave keeper. We tired English. We tried Spanish. Nothing worked. Feeling creative, I discovered our secret tip number four. Don’t be afraid to draw.
I drew a picture of a Star of David, and immediately he understood what we were looking for. With his pride showing on his chest with how great he felt that he was going to help us find Steve’s family, he pointed and said, “Go straight.” And then with a proud arm pointing directly to the right, he fluffed up his chest and said, “Go left.” It was just too funny. We followed his non-verbals and ended up going out the Christian cemetery to the Jewish cemetery about 1 KM away.

What a difference between the Jewish and Christian cemeteries. No one was around, except for an older woman who reminded Steve to put his Yarmulke on before entering the cemetery. Completely overgrown, mosquito-infested, and hard-to-find tombstones greeted us. We made our way to the older section of this much smaller cemetery, but we never found any Gutfreunds nor Barátoks. It was interesting none the less, and we wondered if the reason this cemetery was neglected was due to racism or the fact that no Jews remained in the area to take care of the graves. We’d find an answer to this question later in our trip.

Thus, we completed our 24 hours in Budapest. From a quick dip in the bath house, to a free concert with Rod Stewart, a funicular ride up to great art and a somber trip through a cemetery, we enjoyed Budapest by spur of the moment. Without many plans and communicating through non-verbals, pictures, and a sense of humor, we uncovered five secret tips to a spontaneous adventure through Budapest in 24 hours. How will you do Budapest?