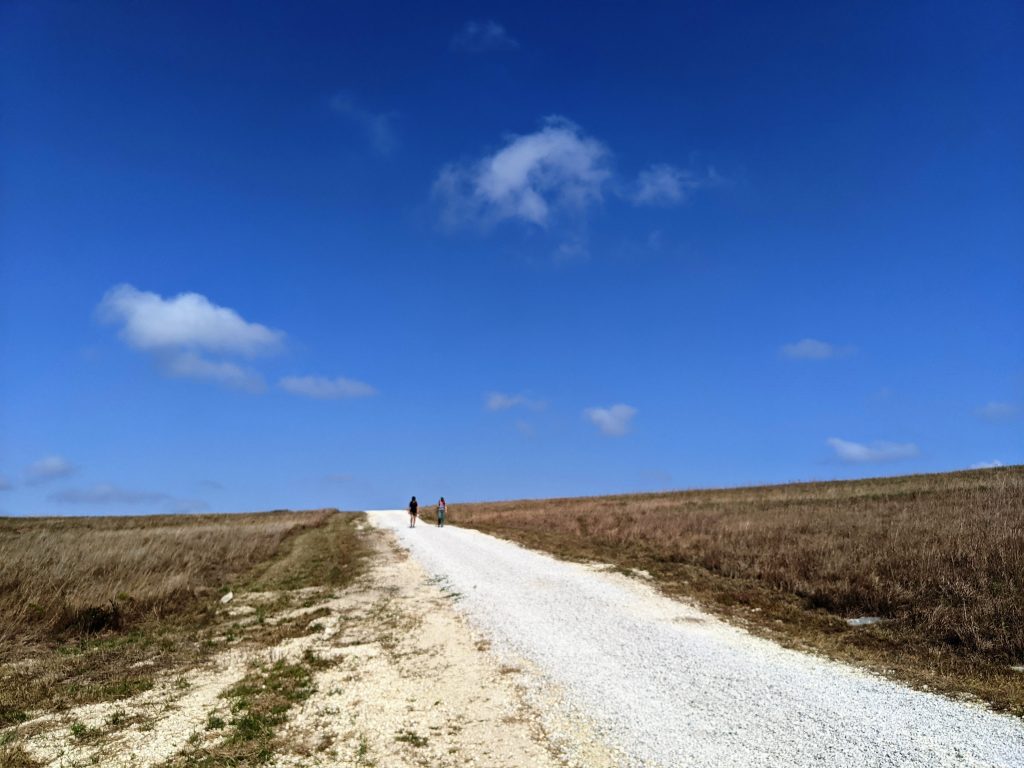 Perhaps the giggle I get the most when talking about hiking all 50 states is the one about Kansas. “Does Kansas even have any hiking?” people have asked. Yes, by golly, it does.

After spending a day driving from Oklahoma to Iowa through Kansas’ middle, we found a super hike on our 50 Hikes 50 States Project.

Discussing who the Wizard was from this point of view took us from Tulsa nearly to the geographic center of the continental US.

A Hike in the Middle of Kansas 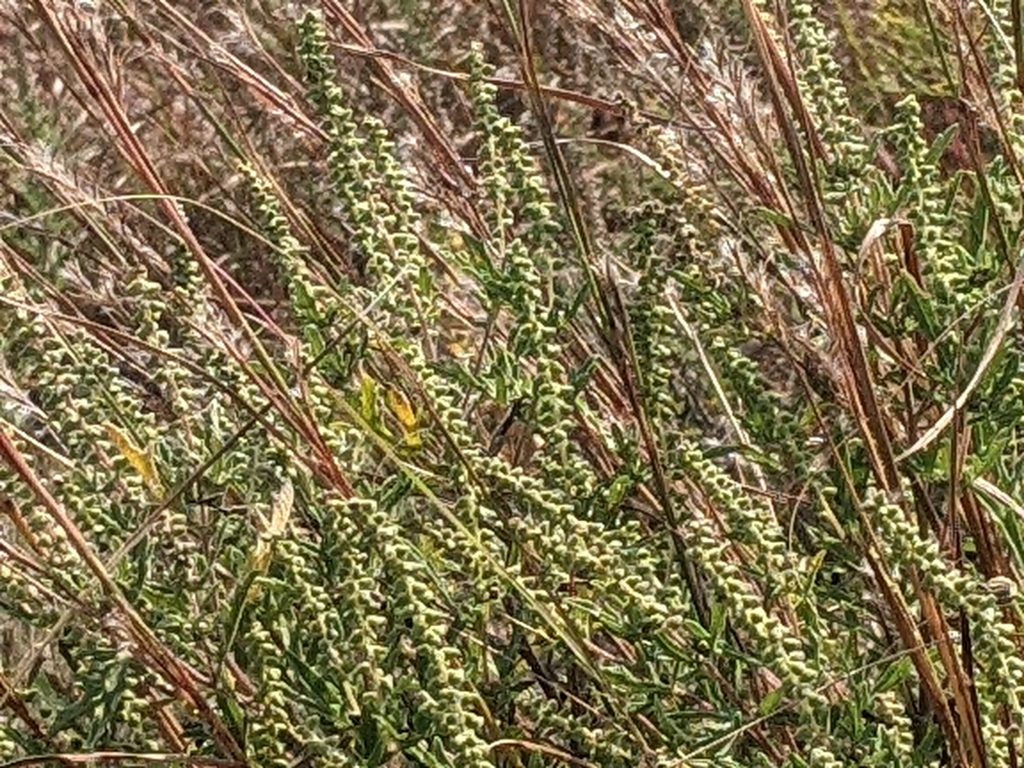 Just to the east of Wichita, we found the Tallgrass Prairie National Preserve. Run by the National Park Service, its sister property is the Midewin Tallgrass Prairie Preserve, run by the USDA in Chicago. Having done Midewin for our Illinois hike, I was very excited to compare the changes in the grasses and the prairies between Illinois and Kansas. 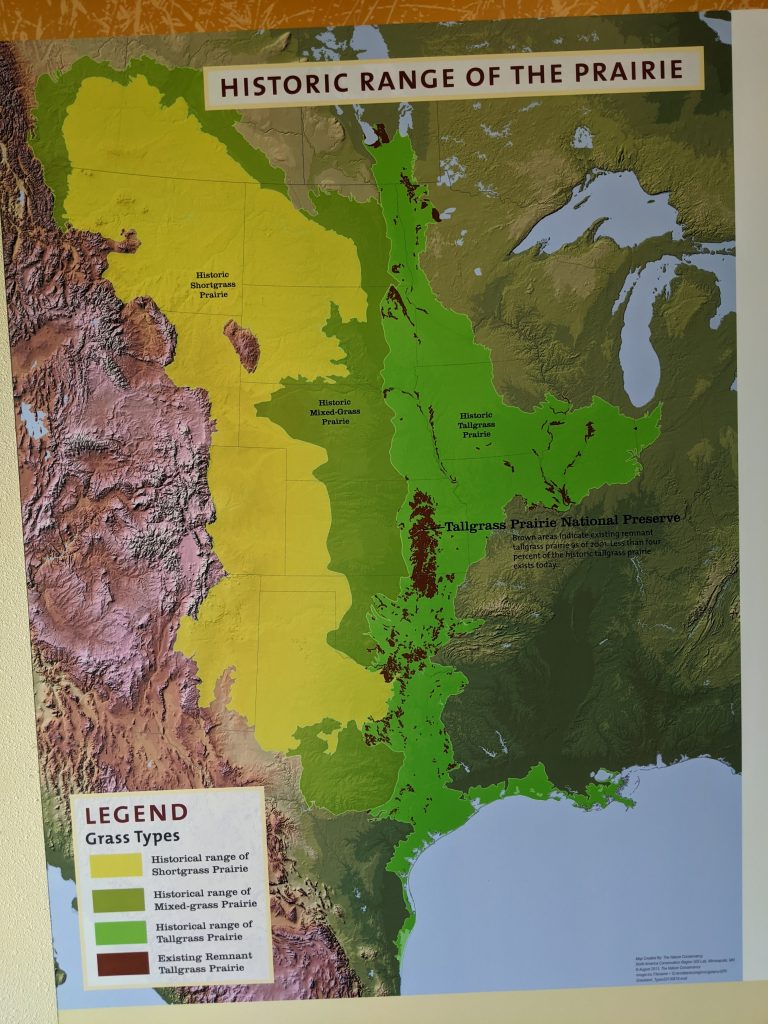 Granted, I’m not a botanist. But I was hoping to find grasses, lush in thickness and taller than me. They weren’t. We did get to look at this fascinating map of the grass range, showing how the grasses go from short in the west to tall in the east. 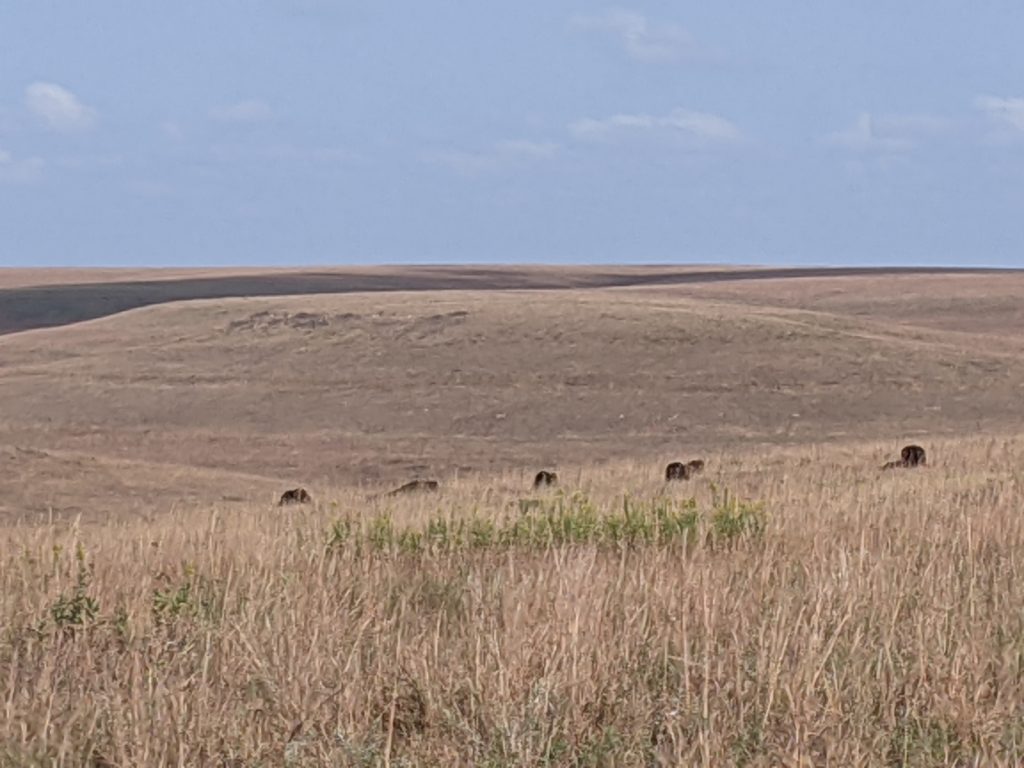 So instead of focusing on the grasses at the Tallgrass Prairie, we set out to hike with the bison.

In Denver where I live near the Rocky Mountain Arsenal Wildlife Refuge, which also has its prairie grasses, but they’re a bit shorter, we also have bison. They live just three miles from my house. But at the Wildlife Refuge, which is managed by the US Fish and Wildlife, we can’t hike with the bison. We have to drive by them, staying in our cars.

The picture below is from the herd at the Rocky Mountain Arsenal Wildlife Refuge, just for reference. 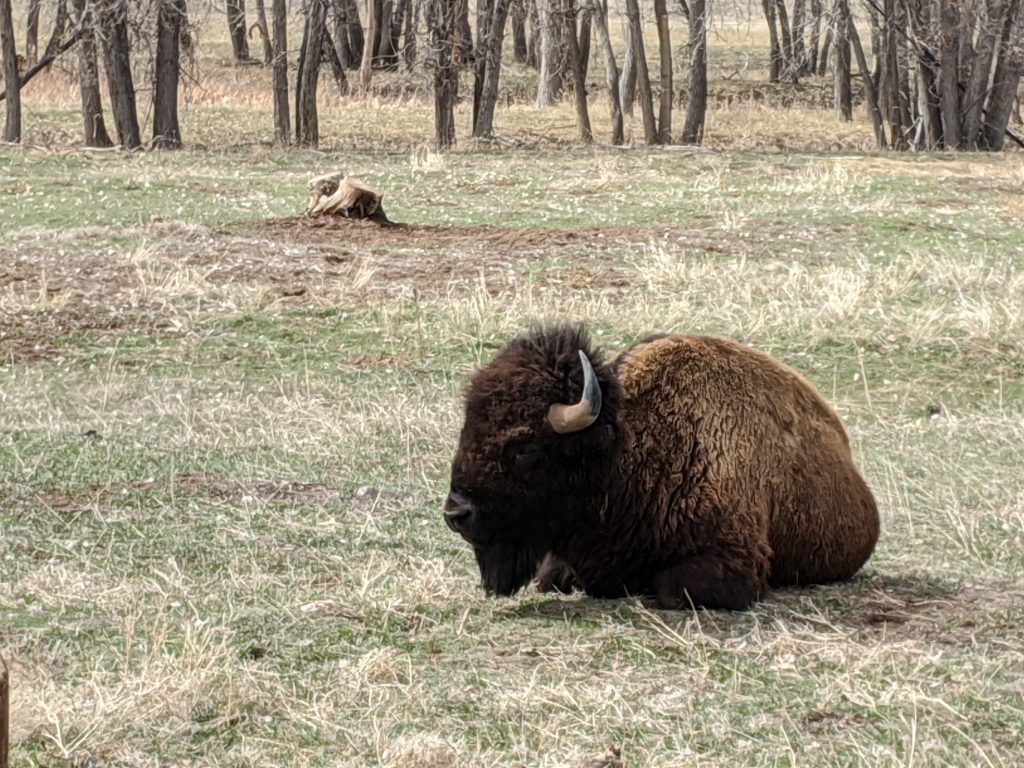 In Kansas, though, you can actually hike in the bison range with the bison. As the ranger forewarned, it’s imperative to give them at least 10 feet of space, if not more, and the bison have the right of way. Don’t be stupid, she said.

Before we headed out to the prairie, we enjoyed investigating the historic barn on the property. Filled with antique farm tools and made of Kansas limestone, we toured the limestone barns and stalls built on the Z Bar Ranch in 1882. Since it took some time to build the ranch, the owners also had a school built up the street for both their kids and those of the workers. We viewed the Lower Fox Creek School, which is up the road a piece, a bit later. 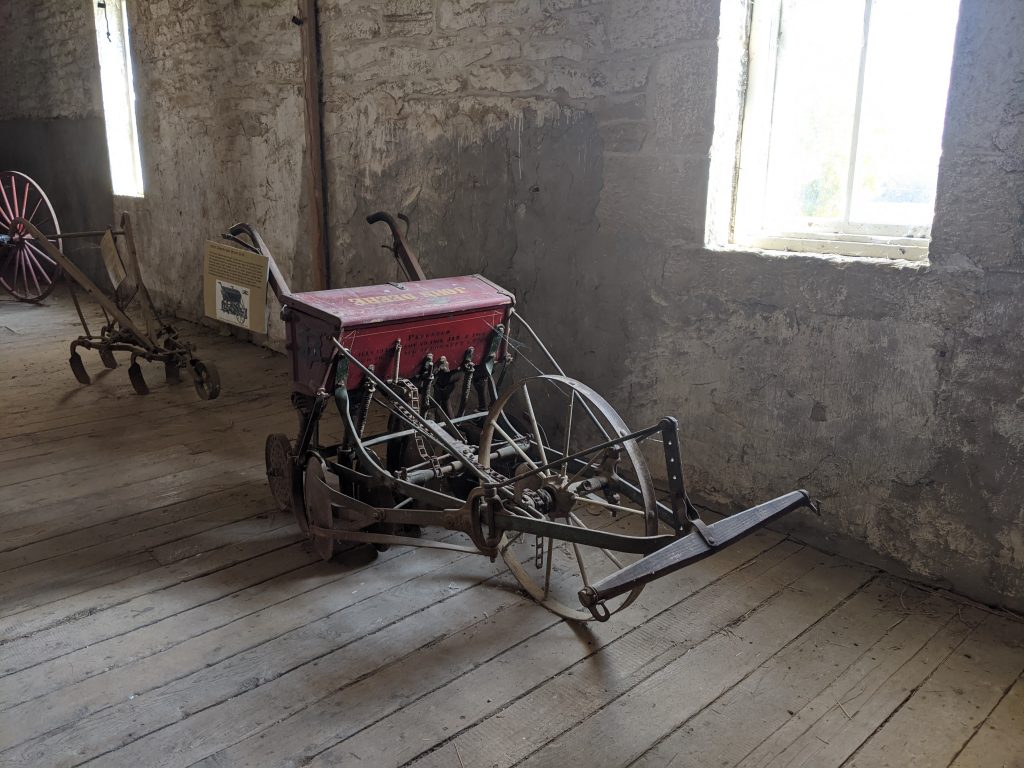 Armed with our instructions for how to not interact with the bison, we headed out on the graveled Scenic Overlook Trail. It was hot. And windy. And hot. And windy. Just like our hike in Illinois earlier. We finally reached the free range after crossing the bison gate, and continued hiking for another 1/2 mile or so. Then off our right shoulders, we saw about a dozen of the 80+ herd. Just far away enough to be little brown spots in a picture, we felt lucky to see some of the herd.

Watch me nearly fall as I cross a bison gate.

Sadly, we didn’t have to pay heed to the instructions from the ranger because the animals were too far away. Not seeing anymore on the horizon, we returned back to the trailhead. At that point, I didn’t feel like I had really seen any tall grasses, and the ranger had mentioned there was a small little outpost just down the road where the grasses where taller and we’d feel more like we had been in a tallgrass prairie.

And Finally, Some Tallgrass 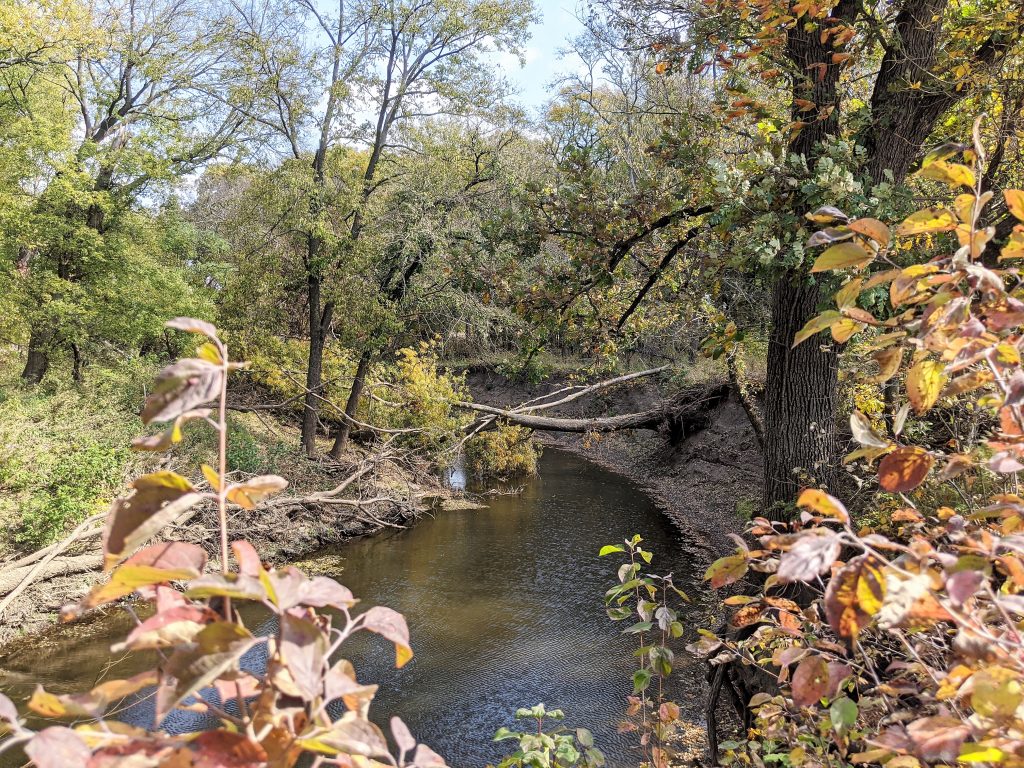 So around the corner and near the graveyard we went to the Bottomland Nature Trail. That’s where I really felt the impact of the tallgrass. Coming up to my nose in their fall splendor, I could imagine how the entire prairie might have looked. Tallgrasses blowing in the wind, millions of bison roaming its 140 million acres, and butterflies all a flitter. We dipped our toes in the Fox Creek to cool off, then headed north to find lunch.

A Little (School) on the Prairie 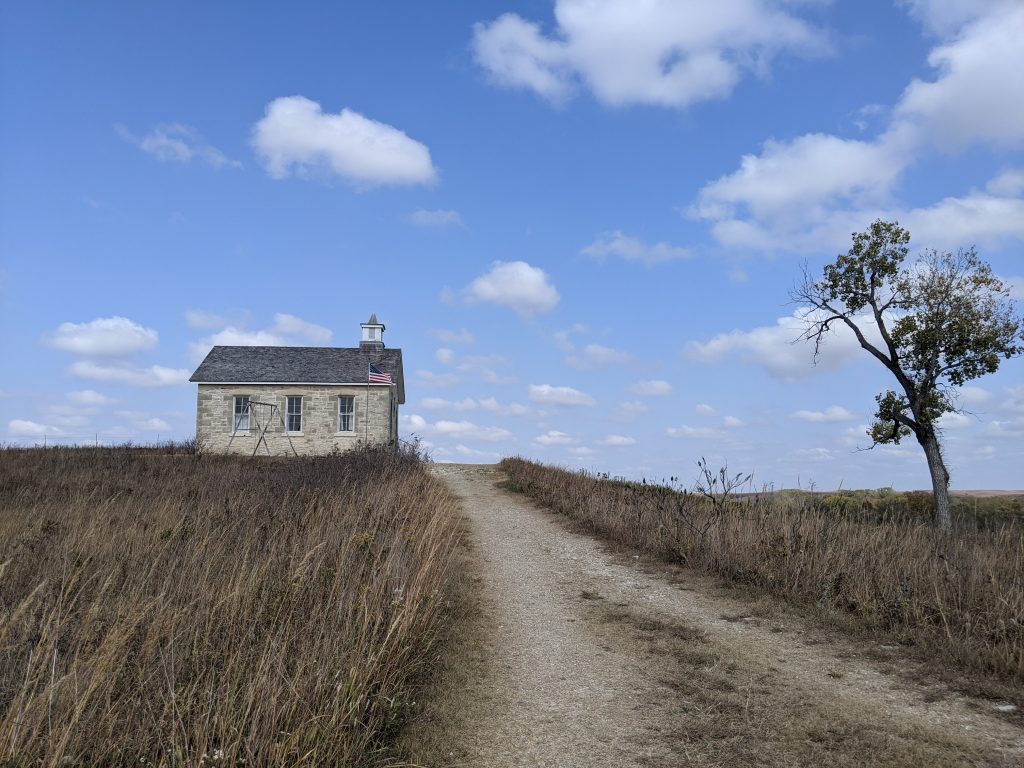 First, though, we stopped at the darling Lower Fox Creek School. I swear Laura Ingalls ran out the door as we arrived. It was fun to enter the school house and find a world map from 1921, pictures of Lincoln and Washington on the wall, and a ribbon of cursive around the top of the chalkboards. We certainly were experiencing a Little House on the Prairie moment.

Enjoy this tour of the school house.

Lunch on the Santa Fe Trail

As usual, by the time we had finished hiking, our stomachs were growling. We scooted along the Scenic Hills National Scenic Byway up to the town of Council Grove, a stop on the Santa Fe Trail and historic gathering spots of wagons traveling west. We couldn’t resist finding lunch at the Trail Days Cafe & Museum where “you can dine on foods of the American Indians, Settlers, farmers and town folks from long ago, when animals were grass fed and food was home cooked.”

I’m not sure about the food from long ago. I had a perfectly homemade mac n cheese. 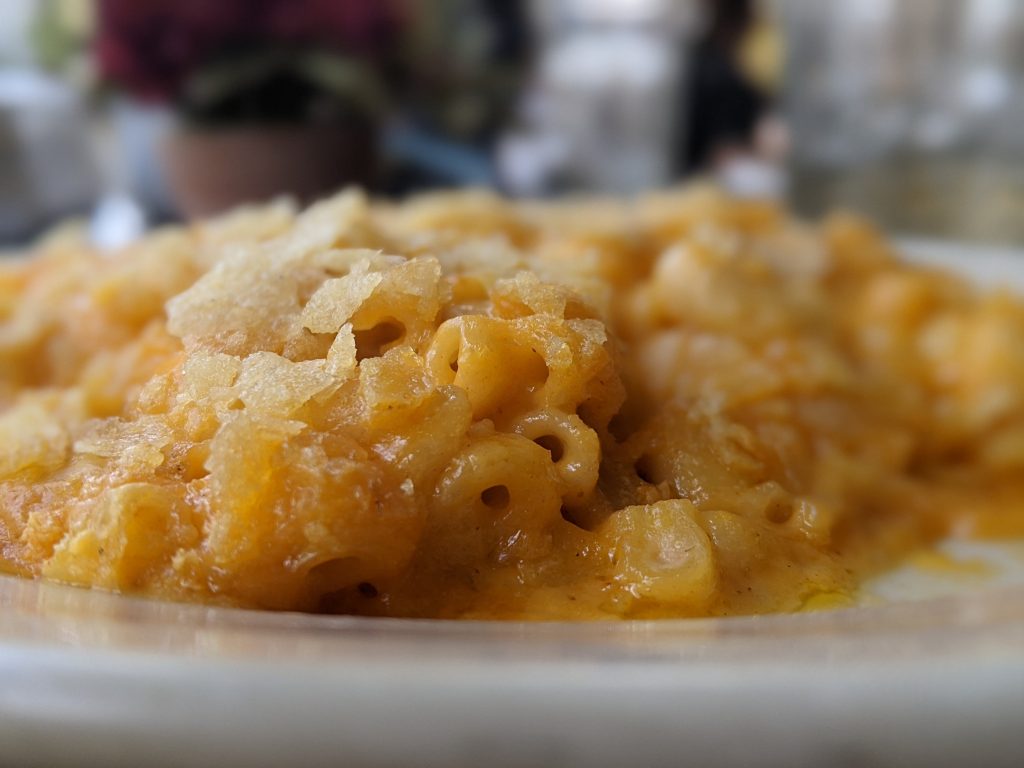 But the company at the Cafe was quite darling. A couple sat on the back porch, greeting us as we arrived. Pegged as “not from around here” by our new friends, we learned their family members were sixth generation cattle ranchers from the middle of Kansas. Even the county where they lived had been drawn by his great-great-great-great grandfather!

The owner of the Cafe, a tiny man with loads of energy, had a story to tell every he came by the table. He referenced his 5-inch ring binder on the table filled with essays and vignettes about Council Grove, the Kansas territory and its history. Of course, he loved that we were from Denver–named after the Governor of the Kansas territory way back when. 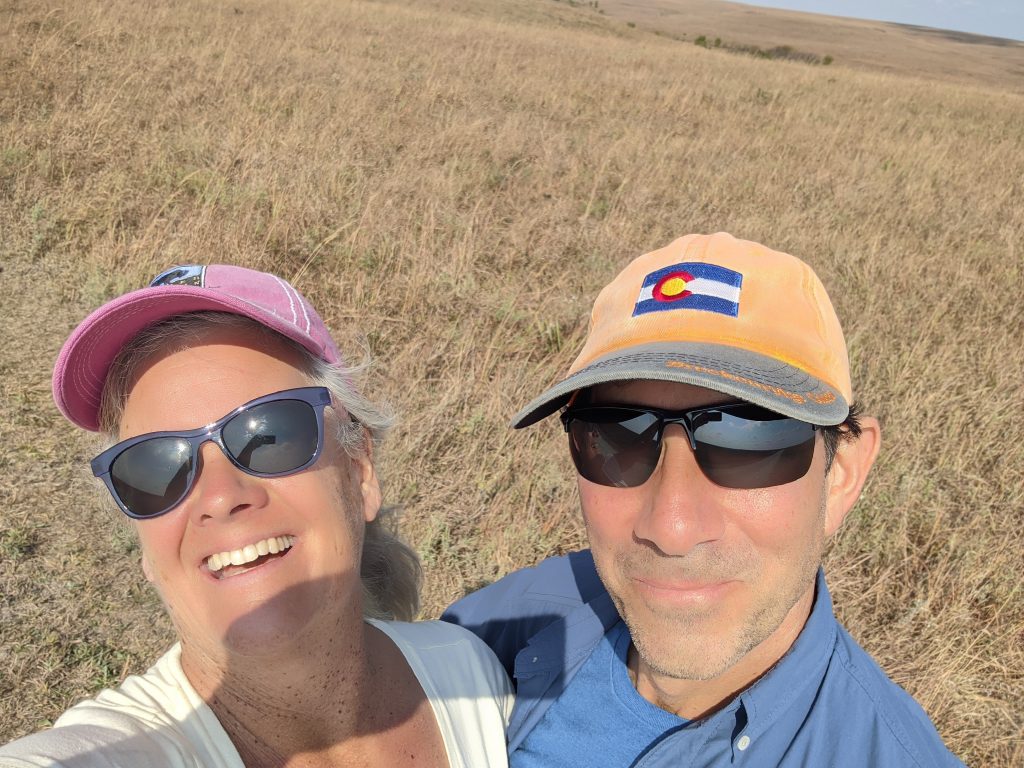 We had one more state to get to and a three hour drive to get there, so we paid our bill, thanked our hosts, and said our good-byes. A sunrise hike awaited us in Iowa, which you’ll definitely want to read about, here. 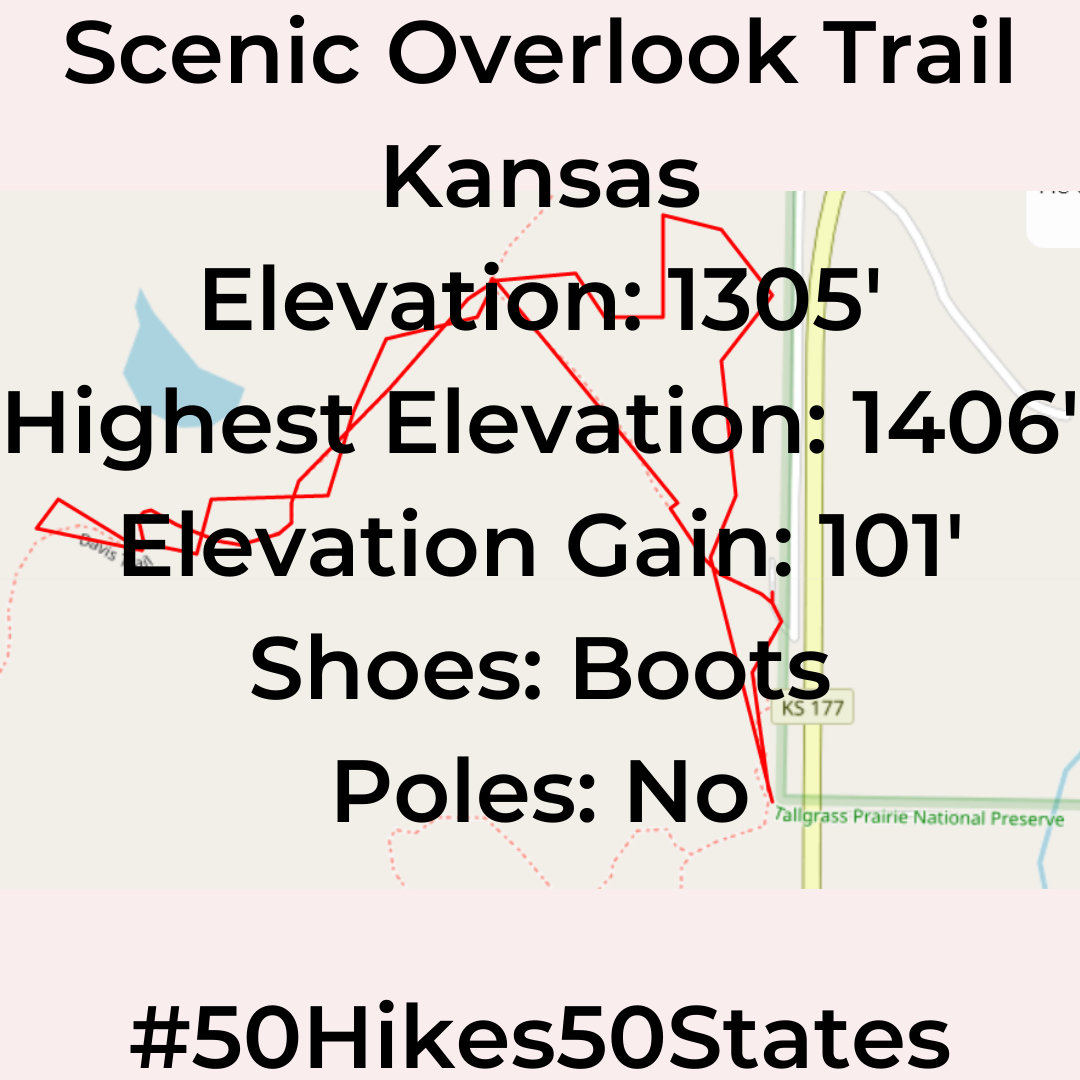